Jazz, indie, alternative rock, metal, hardcore punk, experimental... we have a plethora of genres being taken care of in the local music landscape but what about world music? Babushka is the answer. Having established themselves in March 2013, they have gone on to be regulars in the open mic circuit, playing in places such as Blu Jaz, Artistry, and now count the Esplanade as one of their conquered venues when they released their debut EP Flights of Fancy last week. We talk to Don Shiau and Fauzo on their genre of choice, influential albums, and playing in KL.

Hello Babushka! How are you guys feeling after the EP launch at the Esplanade?

Very good, thank you. It was a very satisfying experience for all of us.

Tell us more about Flights Of Fancy and the themes and inspiration that went into it.

Our music is inspired by travel, and hopes to evoke different kinds of places around the world. Last year, Fauzo and I went hiking in Nepal, and the song 'Sherpa' emerged from there. In fact, all the photographs on the EP were taken on that Nepal trip by Olivia Kwok, a professional photographer and a good friend of ours.

What was the recording process for the EP?

I’ve got a basic recording set-up at home, so we used that. We tracked our parts separately, which works better for some songs than others. The process was fairly straightforward because we don’t have a drummer. Drums are notoriously difficult to record well.

It's interesting that Babushka's genre of choice is World Music, a genre that's not as popular as the usual rock and pop fare in the live music scene here. Why did you guys decide on doing this project?

The funny thing is, none of us are really into world music. I’m more into song-based indie rock, Fauzo’s a neo-classical shredder, and Sophia seems to like big, ballad-y things. Which is good in a way, because that means none of us are precious about the direction of the band. We’re all in a neutral territory, and having fun exploring it.

We didn’t consciously decide to do world music; we started out by deciding to avoid the standard scales and chord progressions in pop music. Which means we play a bit of jazz as well. ‘World’ is just a convenient label, for people who need to know what we’re about in 140 characters or less. In fact, we’ve been told that one of our tunes sounds post-rock. 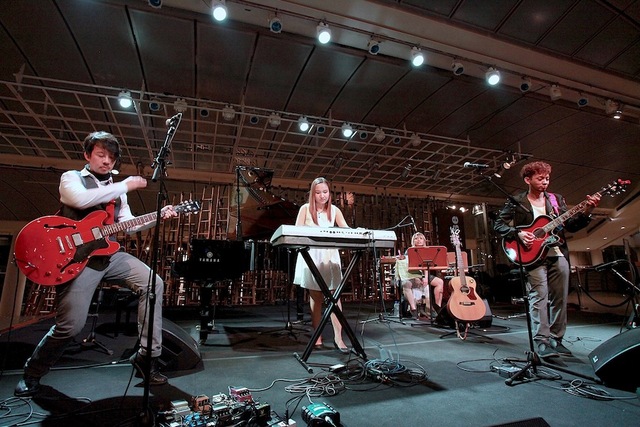 Will there be any plans to include a drummer and/or a vocalist in the band?

We performed with a singer and percussionist for our EP launch, but that was just to spice things up a little. I don’t think we’ll be including any new members in the immediate future. For now, we’re just going to focus on writing and playing better together. But who knows? We might switch things up later on.

You guys played in KL last year - how was the reception and was it different than what you would usually receive over here?

It was just one gig at this really underground venue in an abandoned floor in an office building. It was the kind of makeshift performance space that attracts bohemian, artsy types. The reception wasn’t too different from what we’ve gotten at places like Blu Jaz and Artistry, but the thing that left an impression on us was the space. Makeshift, pop-up performance spaces like that just don’t exist in our highly-organised, well-managed country.

What's in store for Babushka in the near future?

We’ve got two gigs lined up at the end of March (look out for the listings on our Facebook page and Bandwagon!). We also have a couple of tunes that we performed at the EP launch which aren’t on the EP; we’ll polish those up and record them.

Steve Vai is certainly the man. He's one of the most accomplished musicians out there, doing music on his terms, writing very intricate pieces and performing them live. He's a true legend, a master of songwriting as well stage performance. There’s an interview where Steve says "I have never worked in my entire life". He believes music shouldn’t feel like work. Fire garden is one of the best albums by Steve Vai and you can hear hints of "Angel Food" in our own song, “K2”.

Check out the way this young man plays the guitar. He’s reinventing the way of playing the guitar. His style of playing is so unconventional that everyone’s jaw drops when he performs. His fingers are pure muscle. We are so influenced by his fingerstyle playing that our song “Sherpa” is based on that style.

It's almost sinful not to mention Dream Theater here. In this album, all the songs are interconnected so it’s virtually impossible to listen to the songs individually and able appreciate them separately. It's all linked up into a giant epic and one has to listen from start to the end to enjoy the full Dream Theater experience. There's various technical aspects of playing with odd time signatures and frequent key changes like "The Dance of Eternity" to the very soulful, spiritual and soothing soaring vocals in the song "The Spirit Carries On". This is probably one of the best albums in the world and I actually bought three copies of it.

For fans who can't get enough of Dream Theater's instrumental pieces, some Dream Theater members released two albums as the side project Liquid Tension Experiment.

Every guitarist knows the legendary Jason Becker. This album was released when he was 19, about a year before he was diagnosed with amyotrophic lateral sclerosis, which made him lose his ability to speak and left him paralysed from neck down. Although now he's unable to play the guitar, Jason Becker still writes music with his eyes via a system created by his father. Till now no one has actually been able to play any of the songs in this album well. It's just impossible to play them.