Blending old-time musical vibes with modern legends like Prince, the new kid on the block, Dru Chen, is quite the old soul. He's been on the gigging circuit quite a bit as well, performing with Charlie Lim at Timbre's new joint Barbershop, one of the artists for the stellar Mosaic Music Festival this year, and even crossing seas to do shows in KL and Melbourne - it's a wonder how we got him to sit down to answer some very important questions about making music videos, the EP-making process and D'Angelo.

How did you first get into music?

I started out being classical trained on the Piano and Violin from the age of 6. As a teenager, I taught myself guitar, bass and keyboards. I started singing, and I was inspired by vocalists such as Jeff Buckley and Freddie Mercury. I began writing my own songs at 15. At 17, I moved to Australia and did my Bachelor's Degree in Music Production. I also discovered R&B, Soul and Funk at that time as well.

Why soul music? As opposed to going the indie route and the sorts.

I suppose I am creating Soul music independently. "Indie" is an attitude in my opinion. Having said that, I was brought up on Sam Cooke, Ray Charles, Stevie Wonder, and eventually Prince and Michael Jackson. They are all essentials in the lexicon of Soul. Bands like The Jimi Hendrix Experience, Prince & The Revolution, Earth, Wind & Fire and Sly & The Family Stone as well!

You’re on the road a lot, what do you like/what do you not like about touring?

I love meeting new people! I also like reaching out and finding a way to connect with people of different cultures and backgrounds. I don't like not having much time to reflect and write music whilst on the road.

You’ve been doing shows in both Australia and Singapore, how different is it performing in these two places?

I thought the audiences would be a lot different (my very generalised assumption was that Singaporeans would prefer ballads and melodic music, and Australia would prefer the more uptempo rock pieces and blues roots styles). However the tours proved that Singaporeans could very well "get down" with the funky tunes. Every gig is a surprise for me, and sometimes I like to keep it fresh by not writing a setlist and instead "going with the flow" of the audience.

Tell us about the making of the video for your song 'You Bring Out The Best In Me'.

I was very fortunate to be able to work with choreographer Aisha Kuryana (Kimbra, Delta Goodrem, Guy Sebastian) to bring out a colourful Motown/Soul-Train style music video. My immensely creative and talented music video director Edwin Tejoz came up with the one-shot camera technique where the entire clip was made to look like it was one take. We spent three days filming it in the peaceful neighbourhood of Northcote, Melbourne, Australia.

How did Australia influence your music?

In Australia, I grew up amongst friends who made their music DIY, completely indie, lo-fi, and very creatively so. They came up with music that was so interesting and at one with their "inner artistic voice" that it totally overcame their lack of funds or label support. This changed the way I thought of music, and this is exactly how I like to make my music now. Although my ears may have developed a liking towards a more "high fidelity" or "polished" sound, the attitude and creativity is still the same. 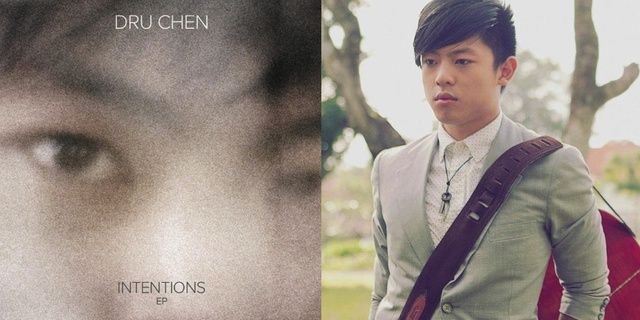 Everything on the EP is you – the instruments, the songwriting, singing – were there any challenges you faced in the making of Intentions?

When you spend so many hours fine-tuning and tweaking your songs, sometimes you lose objectivity. You get too attached to a certain sound or a particular feel. Some musos call it "demo-itis". I played most of the instruments on the EP, but I did have guests play on it as well. This definitely contributed to the funky vibes. Also, performing songs live in concert prior to studio recording helped shape the way they turned out on the EP, because we were able to see how audiences reacted to changes in tempo, form and arrangement.

What’s next for Dru Chen after the Intentions tour?

After the Australian leg of the Intentions tour, we will be making a music video for my next single, 'Turnaround'. After that, we will commence the Intentions Tour: Asia. We hope to reach further parts of Asia, including Hong Kong, Malaysia, Philippines, Indonesia and Japan.

Taught me so much about "slop" and "feel". I love every moment on this LP. I listen to this everyday.

Very much an 80s version to Voodoo. Same musicality, same experimentation, genre-hopping, with The Purple One's unique flavour. So wacky! "Starfish & Coffee", "Housequake"? How the hell? Have you seen the concert DVD "Sign O The Times"? Breathtaking.

Off The Wall | Michael Jackson

The musicality that I respect so much came from the horn arrangements, guitar lines, slick pocket, songwriting, vocal harmonies, everything. I have so much respect for Quincy Jones, the producer.

Like Bono said, "a pure drop in an ocean of noise". The dynamic range in this album is unbelievable. From the quietest pin drop to the loudest crash. Literally, a-whisper-to-a-scream. Truly a work of beauty within the rock lexicon.

A Night At The Opera | Queen

Freddie Mercury was probably my earliest inspiration as a vocalist, but its the artistry of the whole band that really shines on this record. I cover "Love Of My Life" in my gigs. The song forms are so unusual yet remarkably memorable and mass appealing. Art Rock in the most positive sense.