Words by Karen Gwee
Photography by The Idealiste

If there were a perfect word to describe Sean Lam as a musician, it might be 'quiet'. This wasn't always the case. After all, as frontman of the incredibly influential Concave Scream, he seared Singapore's eardrums in the late 90's and 00's with angst anthems like "Driven" and "Gone." But after Concave Scream lapsed, Lam turned to soft, acoustic folk tunes, made in hushed sessions during the wee hours of the night.

He dubbed the project Hanging Up The Moon, another evocative band name intended to reflect the music's nocturnal nature. Lam put out the first Hanging Up The Moon self-titled release in 2011 and the second record, The Biggest Lie In The World, in 2013. He maintains a reassuringly constant if slightly muted presence in the Singaporean music scene, surfacing between album cycles to perform the occasional gig and deliver the occasional update. Like we said: quiet.

Things might not remain this way for Lam, though. Hanging Up The Moon was one of the few local acts invited to perform at the highly anticipated St. Jerome's Laneway Festival this January, and the once-solo project has officially expanded to become a full-sized band. The sparse guitar and ukulele have properly given way to lush and layered soundscapes.

The new album by this new iteration of Hanging Up The Moon is Immaterial, which will be released exclusively on vinyl this Saturday to celebrate Record Store Day. It will be released in other formats on 24 May. We spoke to Lam to find out more about how Immaterial was made, his love of vinyl and his relationship with Concave Scream.

It's been two years since your last album, The Biggest Lie in the World. What was life like in the interim? Did you take a break before writing Immaterial, or did you plunge right into making music again?

My involvement with music has always been a cyclical affair, so after the last album, things pretty much went back to normal for a while, focusing on my day job and doing the school runs etc. In between, I would still write songs whenever I got inspired. I ended up with enough songs for Immaterial sometime in February last year.

The Biggest Lie in the World had a lamb on the album cover. On Immaterial, there's a fox. It fits with the album title, because the fox doesn't look quite real — it actually seems more like taxidermy to me. Was the continuing animal motif intentional? Why a fox?

Yes, I chose taxidermy as the visual theme to go with the mood of the album. I've always been fascinated by good taxidermy. How dead and artificial things can be made to look so hauntingly beautiful. I did not however plan for the continuing animal motif. It just so happens that I love animals, especially when they are alive and free :)

I actually did an earlier version using photographs of dioramas I took at The American Museum of Natural History... but then canned it after realizing that I probably couldn't afford their licensing fees. 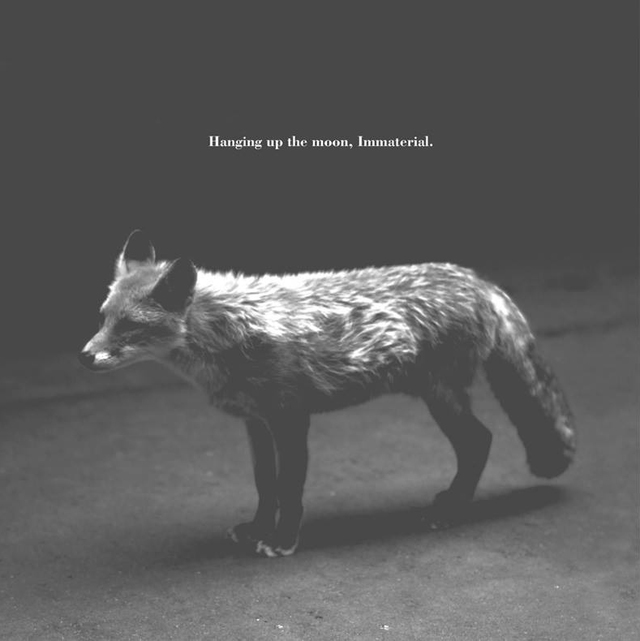 The album cover for Immaterial, the third official album of Hanging Up the Moon.

Hanging Up The Moon has evolved from a singer-songwriter project into a five-man band. What would you say each of your bandmates bring to the table? Could you break down their musical contributions for us?

Yes, through the years, this project has definitely grown in both line-up and sound. Needless to say, each and every one of the guys have made invaluable contributions to the music. Let me just give you a quick rundown. Victor Low (Affixen) is on bass and effects. He is also responsible for mixing and producing the album. Leslie Low (The Observatory) is on guitar and he also backs me up on vocals. Alexius Cai (Piblokto) is also on guitar and Dean Aziz (Concave Scream) is on drums and percussions. Everyone sings in this album :)

In addition to the band, we also roped in two sessionists, Karen Lee on violin and Zhong Ren on cello.

The first song off the album you released in full is 'The Divers'. It's a beautiful track with fuller and richer instrumentation. Is it the first single? Why did you choose it to be the first song for proper release?

Thank you! 'The Divers' is a simple love song. There are a couple of them in this album. It's strange. I used to avoid this topic in the past but somehow these songs just came to me. I chose it cos it has a nice groove to it and figured it'd be a good introduction to the album.

When asked to speak about your lyrics, you often shy away from talking about exact meaning, and you've said many times you think the lyrics should be up to the listener to interpret. Is this a belief you've held since you started writing songs? Have any musicians inspired this belief in you?

Yes, I'd rather not go there because I truly feel that songs exist for people to put their own meanings in them. That's the reason why we love them and why we hold some dearer than others.

Also, when I write songs, I'm really not thinking very hard at all. Usually it's from a feeling that I get and what gets penned down are just thoughts that happen to find their way there. So you see, when a song is forming, sometimes even I don't seem to know exactly what I'm writing about...

The Biggest Lie in the World was released on vinyl, and Immaterial was released exclusively on wax on April 18, before other physical and digital formats. It's probably safe to assume you love vinyl. Could you elaborate on your relationship with this music format?

Yes I'm fond of the vinyl format because of how warm it sounds. Naturally, it has less clarity than a CD but it is exactly this analog quality that I feel really suits the lo-fi nature of Hanging Up The Moon's songs. LPs are also tangible and I think there's something really nice about having music in physical formats. It's so much more of an occasion when you put a record on a player. I think it actually encourages people to appreciate the music more because you'd have to care for it. Of course, where packaging and album art is concerned, it's also a wonderful thing to look at.

I'm glad that this whole vinyl revival thing is proving to be more than just a trend. Quite sure it's here to stay. 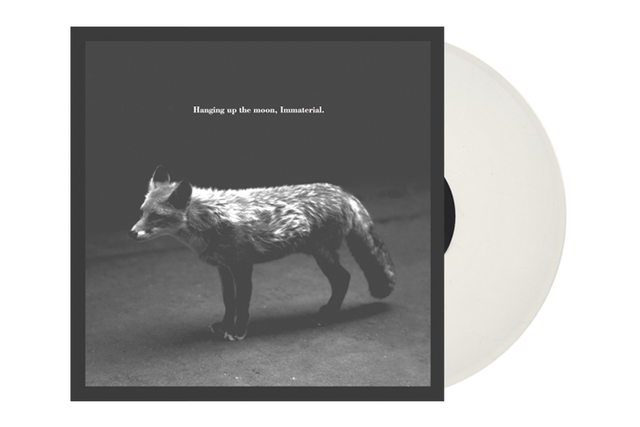 The vinyl packaging for Immaterial. The album was released exclusively on vinyl for Record Store Day on April 18, with a subsequent digital release on May 24.

The first Concave Scream album is 20 years old this year. Has that been a cause for any reminiscence? How often do you think about Concave Scream and that period of your music-making career?

We had a great time and a pretty long run making music together so naturally, Concave Scream will always have a special place in my heart. Still, ever since we put it on hold at a point where we all had to move on with our lives, I have never really felt the urge to look back. I suppose nothing stays the same and through the years we've all changed one way or another. It is unfortunate how some people just won't accept that. I'm thankful and proud of the past but I'm also equally happy to be moving on.

All Things Must Pass | George Harrison

This album is practically bursting with emotion. You'd come away feeling a bit wiser every time you listen to it. A timeless classic.

No Such Thing As Ghosts | Leslie Low

Leslie's songs have so much depth, it's easy to lose yourself in them. This latest solo album of his really hits home.

Neil Hannon has a bucket load of wit and wry humour. Genius.

Love the laid back, feel good vibes as well as the disarmingly simple way in which the music is presented.

Immaterial will be officially released on May 24 but the vinyl edition is already available at these locations. You can also refer to our vinyl record shopping guide to get more info about these places.