The latest offering from audio-visual collective and record label SYNDICATE comes in the fluid form of Intriguant and his debut release Ellipse. Already finding acclaim and a global audience (with hype seen in places as far as Israel, Slovakia and a feature on The Fader), Louis Quek is on a fast-track to prominence, and making a deep-seated impression every time he's up on stage. Melding downtempo music and fragile beats with minimalist undertones, he impressed us when we first caught him live at Shots Cafe in Digital Death - a quietly mesmerising exhibition of the utmost audio-visual experience with visual artist Brandon Tay on projection duty. We caught up with Intriguant recently for a conversation about Ellipse, granular synthesis and the importance of visuals in storytelling.

Hey Louis, what have you been up to these days?

Prior to the release of Ellipse, I did a few shows such as Syndicate Subsessions, Blue Hour Sessions, Sole Superior (Zouk) and also a gig up north in Kuala Lumpur.

I also had the opportunity to design the music for a projection mapping installation of a HDB building by visual artist Brandon Tay, which was commissioned by Channel 8. And I also did the sound design for a short documentary 'The Collectors' by filmmaker Thaïs Breton, which recorded and processed sounds of abandoned places in Singapore.

Let’s talk about your new release – tell us more about Ellipse and what went behind the making of this album.

Ellipse was based on the perception of different spaces that I occupied and cherished. These ideas were drawn from spaces that resonate with me, which allows me to render spatial cognition into audible sounds. These visual memories of shapes, objects and textures are a collection of images that activates the conceptualisation of a soundscape fragmented by the elements of nostalgia.  With field recordings as a starting point, I was able to inject in my own interpretation of memories, reconstructing environments to revisit these moments.

Ellipse articulates a lot about your music; a deeply downtempo style with fluid, minimalistic swathes of delicate sonic inputs. Why did you choose this subdued approach over other aesthetics?

At that moment, it felt natural for me to explore sounds there are in between spaces. I was exploring the concept of granular synthesis, where sound is broken down into microseconds and later reconstructed to produce a textural sound palette. From there, I would cut it up for resampling and process it further.

The visual aspect seems very important to your live performances; how do you view the relationship between the audio and visual element of Intriguant, and where do you feel this relationship is going in the future?

Visuals play a significant role for the storyteller to articulate the sonic gestures of the music. I always want to maintain a one-to-one relationship in order to portray it as a unit rather than a separate entity. I guess it's because I have always been drawn to the aesthetic of audio-visual installations and performances from artistes such as AntiVJ and Ryoichi Kurokawa. Well, I would definitely want to maintain that relationship with a greater immersive experience. 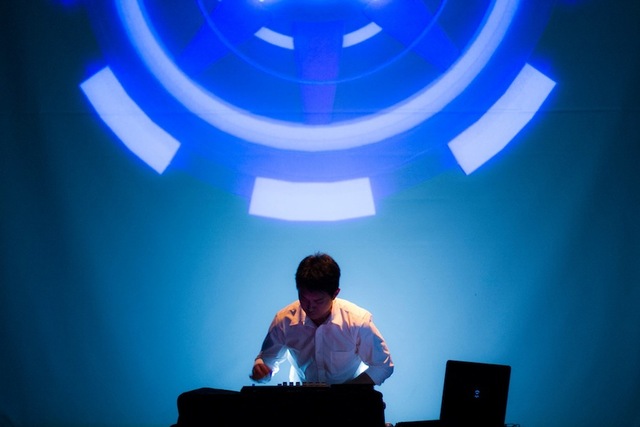 You work very closely with fellow SYNDICATE member and visual artist Brandon Tay – how did your collaborations with him begin at first? What’s going on in that mind of his?

I met him at a bar called Lucky 13 and started having a little debate about the concepts of Stockhausen, Alvin Lucier and Xenakis. I later on approached him to collaborate on an esplanade project that didn't went through but it led to the performance at the Syndicate Subsessions in October last year. Prior to that, we would have discussions about the concept of the EP and how the songs came about. This led to many late nights at the studio and the occasional differences but it has allowed us to obtain a certain level of understanding between each other.

It’s hard to decipher what’s going on in his mind. It depends on how you want to interpret it. But if you really want to have an insight, be sure to check out 'Kings of Sleep' with the Oculus Rift.

What do you think of DJ/producers such as Bonobo, SBTRKT and more expanding their live sets to a full band? Would this be something that you’d be exploring as well?

Yes, I have always planned on exploring the live aspect of the performance with live instrumentation. Since we're on the topic, I had the chance to catch Bonobo and his band live at 25th Dour Festival last year. It was such an inspiring experience for me. The entire live set was seamless from the beginning to the end. Personally, it was one of the best representations of a live electronic set with live musicians. I do hope to have a chance for the right opportunity and environment to showcase the music with a full band.

Sweet. What’s next for Intriguant?

Keep working on more materials and live shows. Maybe another release by next year. Maybe.

This album opened up a whole new realm of sounds for me. Amon Tobin is such a genius in putting together this modern day musique concrète album.

Drift was the album that inspired me into producing my own music. The record did its magic by sounding different from that I have heard at the moment. Through his music, I also discovered the LA’s beat scene and Low End Theory. Till today, I still listen to this album every once in a while.

This collaborative album has the perfect example of an exchange between the aesthetics of electronic pulses with the acoustic element of a grand piano. It is the album to listen to when you need to pull an all-nighter.

Discovered this electronica trio from France when they were touring in Singapore some years ago. I was pretty much blown away with their live audiovisual performance, as their third member was the VJ of the band.  Because of this album, I enjoy creating the contrast of glitchy rhythmic syncopations with a flowing chord progression and I definitely hope to work with a vocalist someday.


This was 2013's album of the year for me. I am a huge fan of Japanese electronic music. There is something special about their sound, which is not easy to emulate. Japanese producer, Yosi Horikawa has a keen sense of hearing. Produces music with field recordings as the primary sound palette. Every sound source in this record sounded clean and very well produced. Vapor is truly a breath of fresh air.