When they return to our shores this time, it will be a new Mystery Jets we will see. Recently, the usually London-based band moved to Texas to write an entire album. That's not the only interesting thing about them. Sharing with us tales of zoo visitations as a ritual, living in a haunted house, being Neil Young and the sentimental Paul McCartney aficionados, we begin to really, really like the folks of the Mystery Jets.

What have you been up to since the last time you were on our shores?

We listened to nothing but Neil Young for a year and recorded a new album out in Austin, TX in a house we named 'Radlands', which is what we also called the record. We have gained two new members and lost another... but I think we are sounding the best we ever had. It’s an exciting time.

What do you remember about Singapore and what did you like?

I always try to visit the zoo in each country we play, as a sort of custom, and Singapore's Night Safari is hands down the best in the world. You see all the creatures that 'only come out at night' - like the Smashing Pumpkins song.

You relocated temporarily to Texas to write Radlands. Why and how was the experience like?

It was like a dream and perhaps a slight nightmare at the same time. We feel the house we lived and recorded in may have been haunted, there was just a strange energy flying about which I think got to each of us at one point or another. We would all meditate together in the mornings, which was about the only thing that kept the whole thing together. It was such a wild place to spend the summer; we had armadillos and rattlers in the back yard, and a gun in case any came too close. We lived by a little shack on the Colorado River, which served iced margaritas, and fried pickles, which is pretty much what we lived off.

The album is described as your own ‘version of a country album’. What triggered this direction?

I guess we got to a point at the start of last year where we really needed to find a new muse. Twenty One and Serotonin felt very much like sister records, and we knew instinctively that we needed to change as a process of evolution. Going to live in the states provided that for a short while. I wish we could have stayed a lot longer, but then all the wives and girlfriends would have kicked up a fuss you know?

In terms of the way the album sounds, I wanted to keep technology a far away from influencing the recording as possible. To me, Radlands needed to sound like a string being plucked, being picked up by a beautiful and crisp old microphone and sent down a wire through a box which would amplify it so that it could make an impression on a piece of tape, which would then be cut onto a piece of vinyl. All sounds pretty simple really, and it is. 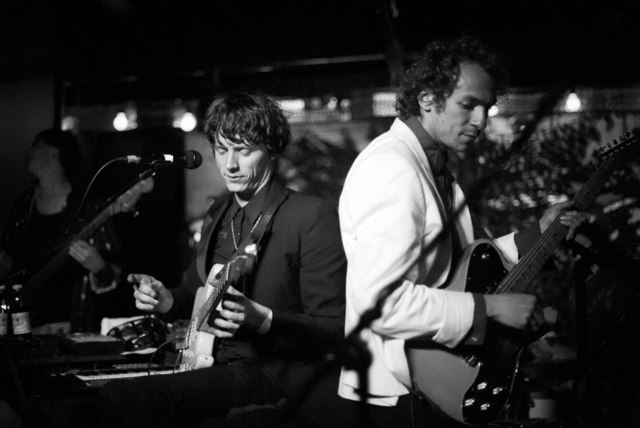 Not to be confused with the 'complete' King Crimson, I got given this on cassette tape for Christmas when I was 9 years old and it blew my tiny child mind. It spans right from their classic first record with Greg Lake to their avant-garde pop work with Adrian Belew in the 80s. I have Greg Lake's number on my phone from when he came to see us play, it really is about time I get on to him about a collaboration.

On The Beach | Neil Young

Harvest is usually his first record people come to, but really it's what he was doing in the mid 70s that interests me the most. This is the centerpiece of his Ditch Trilogy and documents his dark discontent at the world of fame he found himself in living in schmaltzy LA. At the time he said "Heart of Gold put me in the middle of the road, so I headed for the ditch, it's a rougher ride but you meet more interesting people."

It is far from being a 'perfect' record - at moments it rambles, there are a couple of throw away boogies, and it's quite overly sentimental, but that's precisely why I love it, because of it's imperfections. Paul could have done anything he wanted after the Beatles; he had all the stardom any man could imagine in his wildest dreams. But what appeared as his first solo release is an incredibly unpretentious, intimate collection of songs that feels a lot like looking through the keyhole into a very private world. It is quite unique.

It's not an easy listen, but it is a record which 30 years later still feels modern and stands up as a very consistent expression of artistic intent. On Broken English the flower child Marianne Faithfull of the sixties has long been destroyed and corrupted and has been replaced by a gravel-throated, smacky, sexy old bitch barely recognisable as the same person. I think it must have been a big inspiration to Grace Jones, and features some exceptionally filthy, squalid lyrics.

In 1973, when ex Soft Machine drummer Robert Wyatt was in his early twenties, he fell from a third-floor window at a party and permanently paralysed himself from the waist down. Considering he had been allegedly committing adultery at the time, it is remarkable his then-girlfriend Alfie Benge stuck with him through his recovery and went on to become his muse for the entirety of his career to date.

Rock Bottom is a hazy, dreamy gem of a record. It is, at a time, both the sound of complete desperation and hope, in the face of being within inches of life.