Syndicate's latest offering is truly something remarkable - a seductive blend of everything we love about R&B, soul, electronica, and experimental music in the form of Octover. They've even been reviewed by Pitchfork and Pretty Much Amazing (yes they're that good). We've already gushed about their debut EP in our record review here and we were more than happy to have them in our Guest List this week. Read on as we talked about their art, the importance of the Victorian Era and some Nine Inch Nails.

Hi Octover, introduce yourselves to us!

We are Jason Tan and Vanessa Fernandez, producer/engineer and singer/songwriter respectively. Jason has produced and arranged music for several Taiwanese acts and Singapore Idols. Vanessa was previously in Urban Xchange, Parking Lot Pimp and a presenter on 987fm. We've been involved in the Singapore music scene for a long long time. Please don't ask us how old we are!

How did Octover come to be?
V: Octover came about almost organically. We've known each other for years, since Jason was a mixing engineer on some of the tracks for the first Urban Xchange album. On one occasion we were working on a project Jason needed backing vocals for and I brought him a demo I'd done for Hurt. Jason listened to it and said he'd work on it with me and that's when our journey began, almost 3 years ago.

Octover's music is a refreshing experimental mix of soul, R&B and electronica. How would you describe your own sound?
We don't really want to describe our sound. We prefer letting people decide how they want to interpret us.

How did you decide on a sound that is predominantly R&B/soul but in a non-traditional form?
The only thing we really decided on was that we wanted to create something together. That in itself was really liberating because we were each free to express ourselves musically however we wanted.  We didn't actually sit down and think "yes, this is the style of music we will do". The way it sounds is the result of our individual experience as artists coming together at a point in time when we were meant to find each other. 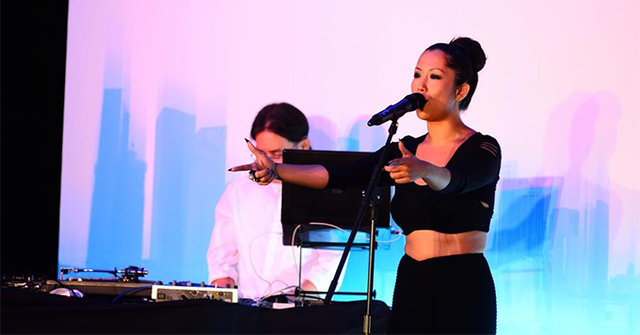 Vanessa, how would you describe your creative progression from Urban Xchange to the present?
Urban Xchange was a great learning experience. It was the first time I made music in a recording studio and learned how the traditional format of creating and releasing music works. After Parking Lot Pimp I took a break from making music and supported it instead by being a presenter on 98.7 FM. When I left I met the Syndicate crew and they opened my eyes to a whole other world where concept is key. They inspired me to think differently about music, in terms of what I really wanted to say as an artist and what was the best way to communicate that. Not whether what I was making was catchy enough or if it was "hit-worthy" enough. I am truly grateful to them for that.

Congratulations on getting your song 'Satisfy' reviewed on Pitchfork and Consequence of Sound! How does it feel to know that you are being appreciated across the globe?

What's next for Octover? Any upcoming shows and plans to tour?

We're performing at an event for the Wall Street Journal this month. We're also performing at a social media week event on the 21st of Feb at Broadcast HQ, which Inch Chua is doing as well. We'd also really really like to go on tour with the entire Syndicate crew this year.

Both of us have an immense respect for Trent Reznor. In a lot of ways he possesses skills and qualities as an artist that we admire and emulate. Everything from his approach to making music to how he shares it with his audience. When we used to spend time in the studio just playing music to each other, we got lost in Nine Inch Nails easily. You can hear the industrial influence in our music quite clearly. We both also happen to like this Nine Inch Nails album the best.

Trip-hop is this wonderful fusion of electronic, rock, jazz and hip-hop elements. If you drew a venn diagram of our collective influences, trip-hop would be that sweet spot in the middle. There are so many amazing songs on this album and it winds through the light and the dark, the soft and hard, the synthetic and organic... Very similar to what we aspired to achieve on our album.

Billie Holiday | Jazz At The Philharmonic

Not many people know this but we actually recorded two different sets of vocals for the album. Initially everything was really soft and whispery. Then after we performed our songs at the Gilles Peterson Worldwide Festival in Velvet Underground and Syndicate Sessions at The Esplanade in 2011, we decided on a more soulful vocal performance because it was closer to how we played live. Billie Holiday was known for having an amazingly unique voice but her life was filled with struggle. It really took it's toll on her not just mentally but physically on her voice as well. Many people talk about this live album of hers because it was during her performances in LA and at Carnegie Hall that she transcended all the difficulties she'd faced and just sang her heart out, completely captivating everyone. It was a huge inspiration in the final stages of our recording process when we were finishing up all the vocal tracks.

Sweet Dreams (Are Made Of These) | The Eurythmics

In the early days of our recording in the studio we watched the video for Sweet Dreams. There were similar themes in our music that the Eurythmics translated visually, which united us conceptually outside of the sounds we were creating. The perception of strength and beauty in women, how masks hide and liberate us at the same time. The Victorian era is especially meaningful to me (Vanessa) because when I was in school I wrote a paper on the moral, economic and social repression of women during that period of time which really enlightened my perspective on the female sex and struggle, which is essentially a recurring theme in most of the songs.

Kate Bush is one of Jason's favourite female singers. This is the album on which you'll find This Woman's Work, which we covered on our album.  The first time I'd heard it was actually Maxwell's cover of the song and he's one of my favourite male singers. Maxwell's voice is immaculate but Kate Bush delivers an emotion on the tune that it's impossible to feel anything but incredibly moving. It was the perfect song for us because it represented how we were so different but understood each other so well.