It's been a while since we've heard anything from Pleasantry. A usual fixture in the gigging scene the past two years, the deliriously catchy indie-pop supergroup took a short break to adapt to the physical absence of guitarist (and former Amateur Takes Control mastermind) Adel Rashid. Staying true to their "recycling musicians from active as well as inactive bands" spirit, they've recently acquired the skills and membership of ANECHOIS frontman/guitarist/vocalist Haziq and dropped their second EP Inhabit at the Blue Hour Sessions last week.

We chat with Pleasantry for some enlightenment on their upcoming full-length release, their growth as Singaporean musicians and get an update on their music's metaphorical allegories.

Hello Pleasantry! Great show last Friday, and congrats on Inhabit! How are you guys feeling post-show and EP launch?

Isa: Hello Ilyas and Bandwagon! Thank you so much. We’re feeling great. It was a wonderful show and we feel all warm and fuzzy inside with the great response to Inhabit thus far. The optimism of those who attended really took us and we appreciate the love so much.

Dan: Thank you! Was great to see everyone having fun.

That's great to hear! Tell us more about your upcoming album.

I: Sorry, we've yet to finalize the album title! The newer songs we’ve been writing heavily deal with the consistent theme of memory. On a personal level, we’ve always been attracted to the idea of memory and the importance it has in our everyday lives, spanning banal occurrences to highly important milestones. Memory, in our interpretation, not only deals with nostalgia but also forms an individual’s unique experiences and hence moulds one’s own perspective. Present ideas are projected onto these memories and over time, these overlap and coalesce to form new experiences. Memory never truly escapes us, being an entity part of the past, present and future. These are some ideas and themes that we’ve been actively thinking about, as a central theme to the upcoming album, future songs and even showcases.

We’ll be recording our first album with Leonard Soosay at Snakeweed Studios. It’s been awesome working with him for Inhabit and the band’s really excited to go full-speed with the album. The distance between us and our dear Adel has come in the way of this process, but we’ve since managed to overcome this, thanks to technology and Adel’s quick thinking. 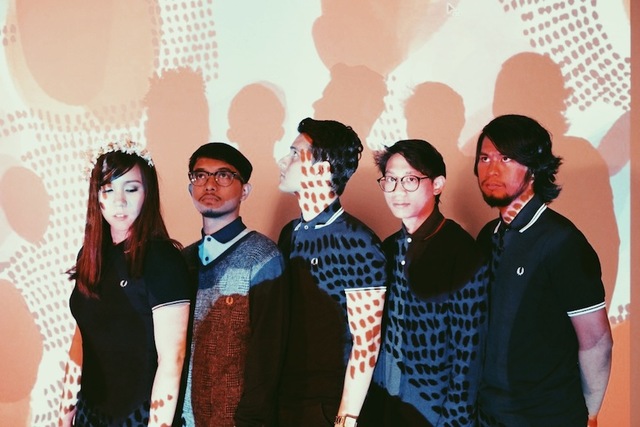 How has the latest addition to Pleasantry - Zeek from ANECHOIS – contributed to the band’s sound?

I: It’s been really great so far. Right now, Zeek’s been filling up guitar duties while Adel’s away and also really allowing us to maximize our sound vocally especially in terms of harmonies. We’ve been writing new material with him and it’s been really exciting having someone new in the band with a fresh perspective.

Adel: I have always tried to sing backup. I guess Zeek can do it now, since, well, he can actually sing.

D: We’ve been focusing a lot on vocal harmonies and structure because Zeek has an incredible vocal tone. I think you’ll hear a lot more of that in future songs.

Two years ago, you guys described your music to us as “a fence planted between two fields - one with grass, breeze and sunlight, and the other perhaps with thorny red roses accompanied by still, stagnant and slightly humid air”. Would you still say the same today?

I: I think that same idea has changed over the years. It’s difficult or perhaps even impossible to negotiate with one’s self and come to a perfect conclusion that falls on just one of these “fields”. I suppose our conception of music is one that has always been reflective of these irregularities of life and a set of songs represent a specific time in our lives, filled with both the flaws and the happier moments. Perhaps one change is the quality of that fence, in terms of its tangibility and permeability. Each of these “fields” can of course seep and leak into the other, complicating this outdated perspective.

Coming from a variety of bands (Lunar Node, Amateur Takes Control, Postbox), what would you say about your progression as musicians?

A: I’ve progressed to become a more laid-back musician with Pleasantry. With Amateur Takes Control, it was more about writing faster, heavier and more complicated songs. There were a lot of weird chords and time signatures involved. With Pleasantry, I play less stuff, which actually is more difficult than it sounds.

D: Adaptability. I’ve learned how to apply different styles of drumming to suit different kinds of music. And also how collaborations can be super fantastic when done right.

I: I probably have become very stagnant in terms of technical skill in my guitar/bass playing. Over time, I’ve tried to focus more on songwriting and arranging and that probably affected that drive for improving more direct skills with the guitar. (I still wish I could shred)

What have you learnt from your years of experience in different bands here? Any takeaways?

A: No band starts rehearsal on time…

D: It’s all about the friendship.

I: Enjoy performing what you write and play. These things are extremely apparent whether you’re on stage or even in the recording studio tracking an instrument and especially vocals. Having that lasting passion is something that nothing can ever buy and it’s this drive that truly fuels everything we do, make, say and think.

Are things always pleasant for you guys? (haha)

I: Haha, not always of course. We do get stressed out a lot, especially when there are huge plans in store. But at the end of it all, the friendship we’ve had together for so many years has kept it (and us) together.

Amazing progression of songs throughout the album, and every track is as memorable as the last. Both lyrically and musically, some of us have been huge fans of Death Cab for Cutie (and Ben Gibbard). Intricate guitar lines with a strong, focused rhythm section are things that we’ve attempted to create with Pleasantry.

Broken Social Scene | You Forgot It in People

Great album, BSS has that special ability to switch from feel-good indie rock tracks to more self-reflexive, emotional and memorable songs. From this album, we’ve been influenced to writing memorable songs, both to our listeners and to ourselves. Making that personal connection is something really difficult to do, especially to the audience but it’s something we strive to do. BSS has managed to do this insanely well through this album.

We’re suckers for Canadian bands and Stars definitely comes in as a huge influence. Torquil and Amy’s vocals intertwine way too beautifully here. This female-male combination of vocals is something that we’ve been going for when Isa started to try adding his vocals to songs. Stars has been a huge inspiration for the vocal arrangements in Pleasantry.

We were going crazy about this band for a good amount of time and they were a huge inspiration to quite a number of our songs. The energy that their songs exude seem to bridge that line between full control and “losing it completely” perfectly.

The vocal harmonies are insane! With the current line-up, harmonies are something we would definitely be exploring, especially when Adel returns home.