If you haven't heard Riot !n Magenta's stunning EP Voices, we highly recommend you to. If you have a vinyl copy, even better. Smooth with Eugenia's strong vocal delivery, Voices is definitely one of the year's most outstanding local release. Having recently performed at the So Happy: 50 Years of Singapore Rock showcase and for Hear Records' RSD celebrations, on top of putting out a new release, the band has been garnering a lot of hype of late. We sit them down for this instalment of Bandwagon Guest List to get to know them a little better.

Tell us more about the Voices EP.

Ken: Voices is a documentation of how our sonic experimentation evolved over the past 2 years. We've discovered more about ourselves along the way and it is definitely reflected in the music that we've  produced.

Why the decision to release on vinyl?

Sulaiman: In this day of age when almost every single song we can think of is available on digital formats, one could just forward or skip through songs. Pressing on vinyl gives one a physical tangible listening experience, the romantic feel of dropping the needle on the record and waiting for the song to come on, enjoying the sleeve art. There is always the ongoing argument of the sonic advantages of vinyl over digital. We are not vinyl enthusiasts though most of us own a record player. It does make sense to release on digital formats too, like iTunes, Spotify, Bandcamp because it's not practical to lug a record player around all the time. We decided not to release on coloured vinyl though it would complete the whole white clean look as black makes it easier to see the dust and grime.

All of you come with diverse musical portfolios - how was it like when you all decided to come together and create music as a group?

Ritz Ang: At first it was pretty unpredictable, like none of us knew what to expect. As we all come from different playing styles and have different influences. So we were tapping on to unchartered territory, but that's the beauty of it. Not knowing how it would sound eventually turned out to be a mixture of beautiful noises. At the end of the day, all of us did our homework, trying to understand each other, and compromising sounds for the grand scheme of making music as a whole. 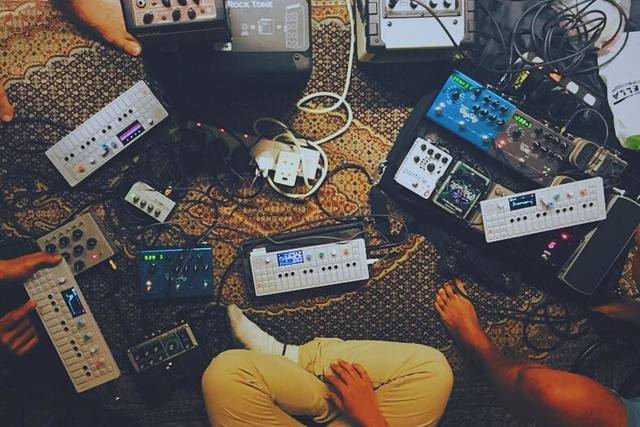 Were there any challenges in choosing a sound or style?

Ken: The challenges in the band is to know each members strengths and fused it into a melting pot. It took quite a while but we are definitely on track now!

Eugenia, your vocals feature very prominently in the music of Riot !n Magenta, are there any local vocal powerhouses you guys admire as well?

Recently the band were part of the So Happy showcase to celebrate 50 years of rock in Singapore, how is it like to be part of the movement - and for nostalgia sake, do you remember your first local gig?

KHAI: My first gig was with a band called Sideshow Judy. We were the few female fronted indie bands during the 90s and it was always a challenge to impress the dominant punk and hardcore scene back then without having Pauline Chong, our vocalist being jeered at or simply put down just because she sings and plays the guitars. But nonetheless we stood our ground at our very first gig held at the world Trade Centre amphitheatre. I remembered even back then that it really didn't matter who was in the crowd but if the band is having fun and puts on a great show, the crowd will eventually join in on that energy.

Ken: Passages by Phillip Glass and Ravi Shankar was a study in harmony for me. This album was my music school. It has changed how I approach and write music.

Ritz Ang: Black Radio by Robert Glasper Experiment. It's one of those albums where something fresh just hits the market, with a mixture of jazz, rnb and hip hop. It doesn't get any better then that. The sound of the album is so raw and honest, kinda like what voices is to me.

KHAI: most influential album for me is The Verve's A Storm in Heaven. Nick McCabes's surreal guitar playing style has made a huge impact on me till today.

Sulaiman: Cure for Pain by Morphine. How this formidable trio (led by Mark Sandman on 2 string slide bass) personifies their sound with 'subtraction' amazes me. No need for any 'egoistical' guitar playing to rock it out.

Eugenia: It Could Happen To You - Chet Baker Sings. Everything, and I mean every element of the album jumped out at me. It is intense, but it isn't in your face. It lingers. I can't explain it well, but listening to that album was life changing.