Mysterious, brooding and dream-like, the music of Australian electronic/experimental outfit Spartak conjure almost tangible landscapes - though one filled with glitchy digital grooves and giddy post-rock-esque drones. With their latest release Five Points, the trio have carved themselves into a comfortable niche of challenging yet accessible intelligent dance music, firmly locked within the spheres of audio-visual technicolor. Thanks to the folks at Dunce, we'll be able to experience Spartak live once again in the confines of The Lithe Paralogue Studio along with fellow sonic progressives .gif, Intriguant and a/b. We catch up with Shoeb Ahmad (guitar, vocals, electronics) ahead of their show this Saturday and uncover more secrets behind their music.

Hey Spartak, what are you guys up to these days?

We just released our most recent record Five Points on the label Feral Media from Sydney, Australia and have taken ourselves on the road, including this trip to Singapore.

Tell us more about your new release Five Points, and what went behind the crafting of this album!

We started making the record back in 2010 when Evan (Dorrian - drums, vocals, electronics) was living in London for a year and we began to exchange files so we could construct the songs between us. Between then and earlier this year, we managed to bring in a new member (Matt Lustri - bass, guitars), plus have young electro-popster Raus join us live on analog synths, which helped us finish the songs and have them sound how they do on record.

Five Points showcases the vocal work of yourself and Evan more prominently than past releases; what brought about this newfound confidence in singing?

There has always been voices within Spartak music, mainly as texture, but when we started writing songs for the band, a lot of that had to do with the lyrical ideas we had - both as turns of phrase, subject matters and narratives - and the importance of that meant it needed to be heard within the music, both as words and as pure sound.

Many have noted the higher level of accessibility in your new recordings; how important do you think ‘accessibility’ is in your music?

It is not something we have knowing tried to achieve but I think our strength is that we still try and retain our sound experiments while creating simple songs that are both easy enough for the audience to understand while revealing layers each time to hear some more.

Australia, Malaysia, Singapore, Japan… what other places would Spartak love to play?

Obvious places are the UK, Europe and the US but before that, our next step is to go beyond a simple gig performance and provide our audiences with a great audio-visual experience each time they come to see us. 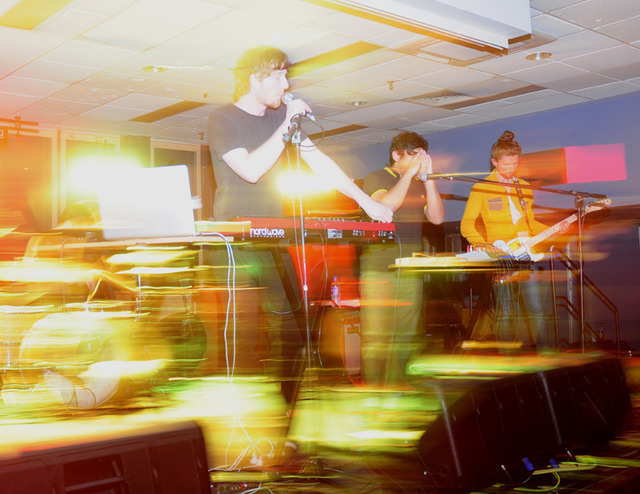 What can one always expect in a live Spartak show?

A dense wall of sound built on sub bass, rhythmic fluidity and glitchy melodic sensibilities. You will notice that we use both live electronic triggers amongst our live guitars and keyboard instruments while Evan performs live drums amongst the triggered grooves.

What’s next for Spartak in the upcoming months?

After this trip, we are going to preparing another release for later this year and also work on new material that we will be recording for our next album in 2015.

A great underrated album that brings together melancholy and hyperactivity all in one swoop. Somehow, the mash of simple guitar melodies and glitchy rhythms don't clash how you think they would and on top of that, the everyday, everyman vocals of Chris Adams totally nail the vibe.

To Rococo Rot | The Amateur View

The German trio manage to update Krautrock for the proper digital age with a crystal clear sheen while the 4/4 rhythms are underpinned by warm bass guitar lines and bubbling electronics. Still going today and still innovating after all these years.

At the height of their fame, the biggest band in the world decided to use innovative (in the context) electronic music as the backbone of their next record and they put this album out. Wicked dancey funk grooves with weird samples and heaps of pretty guitars too. Johnny Cash finishes the album off with a tale over a tech-country shuffle too.

Some people say this album is boring but I don't think I would be making music like this if I never heard this album. They manage to explore a whole range of emotions through the quiet-loud formula but it never gets old. That - I would say - is because the songs are solid and that's all you need!

Tortoise & The Ex | In The Fishtank

Chicago's finest meet Amsterdam squat punks in an amazing one-off collaboration from the late 90s. Weird disjointed hip-hop vibes go head to head with thrashing guitar rumble that have history through Tortoise's roots in American hardcore as equally as The Ex's interest in free jazz and African rhythms.