You probably know of Take Two from last year's hooky, unabashedly romantic tune 'Ariel'. Or from their days as a cover band playing to fellow students from the National University of Singapore. Or even from their opening slot for Scottish legends Travis at The Star Theatre last August. You probably know them as an affable indie pop band that settled comfortably between Two Door Cinema Club and The Killers.

With their forthcoming EP Pairs, Take Two are changing gears slightly. On lead single 'Always Been Right Here,' the boys slow down and reflect. Frontman Paddy (real name Jonathan Ong) sings about unexpected opposites ("The less you seek, the more you find") and plays with turns of phrase ("Red sky in the morning, sailor's warning"), urging the listener to take a good look around them and savor the beauty that's "always been right here."

If that sounds a little didactic, take heart in the sprawling, celebratory chorus (no doubt indebted to U2) and the twinkling, Great Spy Experiment-esque guitar lines courtesy of axemen Tan Peng Sing and Johnathan Lim. Drummer Jeryl Yeo and bassist David Siow complete this joyous track that debuted at #5 on Singapore's iTunes charts, squeezing between Sam Smith and Taylor Swift. We spoke to the band about Pairs, their mentor Saiful Idris and what it is to be Singaporean.

This April, you will be releasing your debut EP titled Pairs. Why an EP, and what's the story behind the album title?

Releasing an EP was always something we wanted to do for the longest time. It's like a proper little self-introduction to people who have been listening to our demos and songs at live performances. If the demos and live performances are likened to rumours, hearsay and small talk, the EP is our "public announcement" - one that presents our songs, both and old and new, as how we would want them to be heard.

It's titled as such as the album has come to represent our short little journey as a band thus far, the experiences gained playing together and navigating this "double life" that we have embarked on by doing music.

You've written songs about a variety of things, from the beauty of char siew to finding love on public transport. Are the songs on Pairs equally eclectic? What are they about?

We've got a song that's about not taking what you have for granted in 'Always Been Right Here;. It's our first single off the EP and it was written after our travels in Malaysia, Thailand and Spain last year. When we came back, people were asking us whether the bands "out there" were much better than our musicians back home. We replied with a resounding "NO" because our talent back home can really stand shoulder to shoulder and even best the "international" talent from beyond our shores.

We realised that there is sometimes this perception that things outside always better than what we have, and this song is our little tribute to what we have back home. We also have songs about yearning for escape and longing for the familiar; and I suppose it's this sort of contradiction/bipolarism that underlines the EP, hence giving us the inspiration to call it Pairs.

"...Singapore is home. It is what it is, it is part of who we are, no matter where we go and what changes in our lives."

The lead single, 'Always Been Right Here', has already gotten significant traction on Youtube and iTunes. You guys in particular upped the production value on the music video with funky effects and a drone. How long did the video take to shoot? What was the inspiration behind it, particularly the double exposure shots and the white sheets?

We have to hand it to Mike from Stampede Pictures who did all the work for that one! It took about 3 days to shoot! The concept was based around the main lyrical motif of the song that everything's "always been right here". So that little reveal that we do with the bedsheets was based off that, all the funky effects and the drone were all down to the wizardry of Mike.

Paddy got on Humans of Singapore recently thanks to a photo with Andy Young of The Silver Strings/Velvetones. How did that meeting happen, and what did you talk about?

(Paddy) A friend of mine happened to know Andy and it was quite a happenstance meeting. I was always curious about the Singapore's musical past, so when the opportunity came up, I jumped at the chance. It was just a very eye-opening conversation about what life was like back then as a musician in Singapore. He told me how local music was a large part of everyone's life back then, and how he formed The Silver Strings. The whole "cut your hair" rule was totally enforced too, and he told me how Led Zeppelin were turned away from performing in Singapore because of it.

Comparing the past and the present, some things never changed. The Silver Strings were neighbours who lived near each other and they came together as they shared a passion for music, not dissimilar to how we formed, being neighbours in our university halls. It was great listening to his stories — like traveling through time. 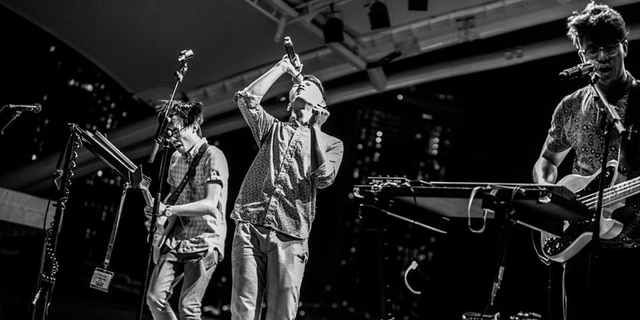 Speaking of local music legends, you guys worked with Saiful Idris of The Great Spy Experiment in last year's Noise Music Mentorship, and in our last conversation you talked about how much you learned from him. What role did Saiful have, if any, in the making of Pairs?

Saiful saved us from being one song short on the EP! We have a track called 'Plantations', which we were prepared to drop from the EP as we felt it might not fit with the rest of the songs. But he told us to have faith in our music and to keep playing that song live and keep working on it. We took his advice and reworked the song quite a fair bit, and we're quite proud of it now and can't wait to let people hear it.

'Always Been Right Here' is quite a patriotic song. You seem to be encouraging (local) listeners to appreciate what they already have in Singapore rather than take it for granted. It's an apt sentiment to express given that Singapore is turning 50 this year. So here's a big question: what does Singapore and Singaporean music mean to you?

Wah this question damn "cheem" (difficult). Nothing too big and fancy: Singapore is home. It is what it is, it is part of who we are, no matter where we go and what changes in our lives. We wouldn't say 'Always Been Right Here' was intended to be patriotic, but rather more of an acknowledgement and acceptance of what we have. There are many things said about our country - how we are too western, we have no soul, we are efficient, we are too clean, the list goes on. But whatever all of that is, that is the fabric of who we are. It might not be perfect, but it never is anywhere else either, so might as well come to terms with who we are.

Singapore music is the soul that haunts the shiny and sterile things in our country. It's the collection of all the life experiences and stories that we as musicians feel need expressing in the form of song. Every culture needs a voice that sings on their behalf, so I guess that's what our local music is.

In A Million Years | Last Dinosaurs

It's no secret how much we love this band (a Last Dino's cover is always under our sleeves). Their philosophy to music is about capturing that indie spirit while not sacrificing the way the music is played. They don't believe that indie music should be shoe-horned into something that's basic and simple and neither do we.

OKAY so this doesn't exist yet and we are cheating by choosing all the albums, but that's only because we feel BBC should be listened to as such - their whole discography as one giant album. Musically they are such a brave and inspiring band. The way they swing from genres in their different releases and the speed of which they do it and the quality of it all. Much amaze, wow. We need more mavericks like them.

This work is just absolute genius. It will take too long to describe why. Every Singaporean needs to have all the B-Quartet albums in their playlist, it is part of the ICA's requirements to retain citizenship. You don't even need to talk about trivial things like it being amazing for "a local band". Objectively, if this album was out there in the world, B-Quartet will conquer it. However, it makes for a sweet little secret. We are all rather selfish and smug that this gem of a band of musical geniuses is something we can call our own, and that not many people outside of our little dot will know about it.

In The Silence | Asgeir

There is a lightness that flits between all the tracks in songs. We're not sure what it is about Scandinavian artists, this lightness gives their music so much depth. It's something we're always looking to create - music that hooks you to the very core.

We don't care how hipster or alternative or "out there" you have become. This album was the one that started us all on musical journeys for so many people in our generation.

You can find Take Two on Facebook and buy their newest single, 'Always Been Right Here', on iTunes. Their debut EP will be released later in the year.