The Ocean are a band that, while unbeknownst to the general mainstream, have carved themselves a very respectable fanbase within the global domain of metal. Subtly traversing through the murky relentlessness of sludge metal and the lofty ambitions of progressive metal, the German outfit have defined themselves best with a series of enthralling concept albums. With subject matter including the prehistoric-era of our planet, Darwinism, astronomy and more, the band matches the density of the topics they tackle with earth-shattering music that's equally thought-provoking and suitable for the mosh pit. Their latest album, 2013's Pelagial, is even a fitting paean to...well, the ocean.

Aside from their music, the band has an remarkable history as well — starting out with a revolving door of musicians that included members of hardcore legends Converge and Integrity, surviving an unfortunate robbery on tour that cost them over US$6000, along with being one of the few international bands to embark on an extensive tour of China over the past few years.

Now stopping by Singapore for a one-off date in Southeast Asia, we managed to speak with Robin Staps — the founder and ringleader of the band — about documenting their tour in China, releasing elaborate boxsets complete with acrylic layers and more.

THE OCEAN LIVE IN SINGAPORE

How’s the tour been so far?

We just played a one-off gig at the Paris tattoo convention last Friday, that was awesome. Now we are preparing for our New Zealand and Australia tour, which also involves a gig in Singapore on the way down there. We're stoked!

For the sake of the uninitiated, who are The Ocean?

The Ocean is a band/musician's collective from Berlin, Germany. imagine you're diving at Tioman. You're at about 20-30 meters, abundant marine life all around you — lots of beautiful coral fish in amazing colors. There’s moray eels hiding under the rocks but they are not really dangerous. You’re looking at Parrot Fish and Clown Fish and Sea Fans moving gentle in the current.

All of a sudden, you're running out of breath. Your regulator fails. You don't have a spare. You always bring a spare, but not today. It's not your lucky day. You look up and see a huge water column above you. You panic. And while you desperately ascend in a rush, the CO2 in your blood expands and explodes with a sparkling water effect.

You get terribly sick from the CO2-intoxication and you panic even more as you realise that you won't reach the surface in time. And in the midst of all this, a big fucking shark is closing in. That's kinda what we sound like.

The Ocean started out with a revolving door of musicians. What made you decide to settle on a stable line-up?

The idea behind the revolving door policy was that it definitely helps to not get stuck with one musical formula if you bring in new people from time to time. On the other hand, a certain stability comes with the certainty that you can rely on each other, and that you know each other well — both as musicians and as people. So it both has its pros and cons.

We have been swapping out a lot of members in the early years, simply because we did not really have reliable and committed people. When we started out with this band, we had nothing to offer except for a shitty band name — no label, no tours, just a bit if a vision of what I wanted to do.

With only that, it's difficult to attract good musicians, because most good players are already involved in other, more established projects. So that's why it was hard to get a stable line up for many years.

You guys are one of those rare bands that has toured extensively in China. What was the most enlightening thing about the trip?

We have toured China twice since, and it's been an amazing experience both times. I had a completely wrong idea of this country until i first had the chance to visit. I was surprised by how easy and efficient a lot of things were — from passport controls at the airport to public high-speed transportation.

I could not feel the totalitarian vibe at all that I was expecting. I was surprised by how far emancipation seems to have progressed here, as opposed to a lot of other places in the world. We were all also blown away by the amazing food!

Their China tour was also documented in a 30-min video, here presented by Noisey.

There was also the unfortunate robbery on tour you guys experienced back in 2010. How did that affect the band when it came to tour practices/behaviour?

We were so fucking angry. We didn't know if we could afford to continue the tour for a few days and we've been thinking and discussing a lot, as all of us were faced with a situation of getting back from 2 months on the road with absolutely nothing in our pockets but lots of bills to pay at home. We were facing a loss of 6000€.

We then decided to carry on and try to be positive and then we started a donation program through my label and have had great feedback. We realized that we have a lot of really devoted fans who were willing to help us out. Lots of people who preordered our album donated US$5 and right now we have almost half the money back, so that's great.

Pelagial was released two years back and it had a really elaborate boxset on vinyl. With the kind of planning it took to make that, are you planning on doing something even more intricate in the future?

Probably not, this project was a lesson haha. We spent weeks in the warehouse packing, unpacking, peeling off paper dorm acrylic layers, boxing, unboxing — sometimes with 13 helpers at the same time. It was the most nerve-wrecking project I have ever done on my label but it was worth it. I'm proud that we have this amazing box set out there. 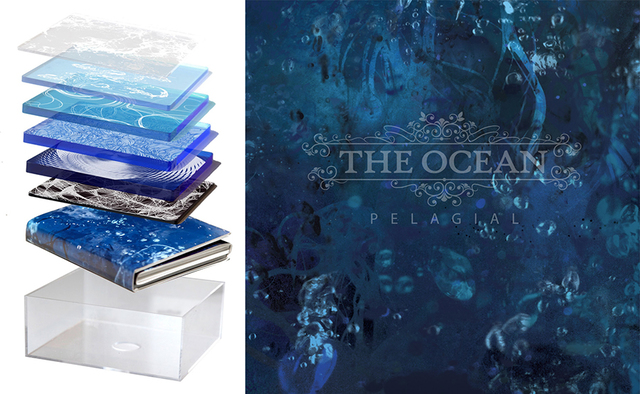 The product shot of the Pelagial box set, alongside the album cover.

How's the new album coming along?

Slow, but good. The first few tracks have been written, and we started rehearsing in January and it felt really good to play all together live in the same room again. We haven't really done that for a long time. It's cool to see that the band is now touring more than rehearsing but it's also a pleasure to jam and to work on ideas. We won't be able to really continue working on the album until end of the year though, so we're looking at a 2016 release.

What can we expect from The Ocean’s first Singapore show?

We will play our album Pelagial in its entirety, plus some older tracks. Pelagial is a journey from the surface into the depths of The Ocean — the music was written with that conceptual idea in mind. And so the "surface" parts feel light-weight and playful, while the deep sea parts feel heavy, slow and claustrophobic.

Everything in between is a progression, a continuous development. The only way to approach this was to write all the music in one piece, and that's what I've done, for the first time ever. Whenever I wrote a riff, I always knew where this would find its place, on the timeline of the record: whether it was more like a surface riff or more like a deep-sea riff. And obviously, this is how the album needs to be performed live as well — as one continuous piece of music.

THE SHAPE OF PUNK TO COME | REFUSED

SOUNDTRACKS FOR THE BLIND | SWANS