There was of course Ocean Avenue, Way Away, Empty Apartment, Only One, and that song from the Spiderman 2 OST, Gifts and Curses - you can say that Yellowcard is a band of many hits and songs that stick. The pop-punk stalwarts are still not slowing down, and have released a new album even! We caught up with frontman Ryan Key to discuss a little more ahead of their big show here on December 10.

Hi guys! What are you up to these days?

We are on tour in the States with Memphis May Fire and Emarosa in support of our new record 'Lift a Sail'.

Good to see you guys are still going strong, tell us more about this new album?

We are so excited about this one. We realized very early in the songwriting process that we were heading in a new direction. These songs carry a lot of weight for the band. We recorded with our long time friend and producer, Neal Avron in Los Angeles, CA. This is our 6th record with Neal. He pushed us this time to really try new things and step outside of what we've done before. So far performing the songs live has been amazing.

You guys have said that the new album features “less of a pop punk sound and more of a rock sound.” Do you feel pop punk has reached its peak in creativity and relevance?

I think we may have peaked in our own creativity within that genre. I don't think it has to do with relevance. There are lots of amazing bands writing and playing pop punk songs right now. For whatever reason we just needed to go somewhere new this time around. I think we have opened up a lot of doors for the future. I have always felt like putting music into genres is really restrictive. I like the idea of having possibilities to try new things.

Last year you guys released Ocean Avenue Acoustic, a nice revisit to one of your most loved hits - which Yellowcard song is your personal favourite and why?

I will always love performing Ocean Avenue. It is still such a huge moment every night. So many people connect with that song. There is always such an amazing energy in the room when we play it.

Aside from your own songs, what song gives you goosebumps every time you hear it?

Right now the song MSK from 'Lift a Sail' does that to me. It is such a powerful lyric for me and the music behind the melody is just so epic feeling.

Do you feel services like Spotify help a band like yours or does it do a great disservice to your sales?

It helps the band but also does a huge disservice to sales. It spreads the music but deters people form committing to buy a full record. It is definitely a double edged sword. 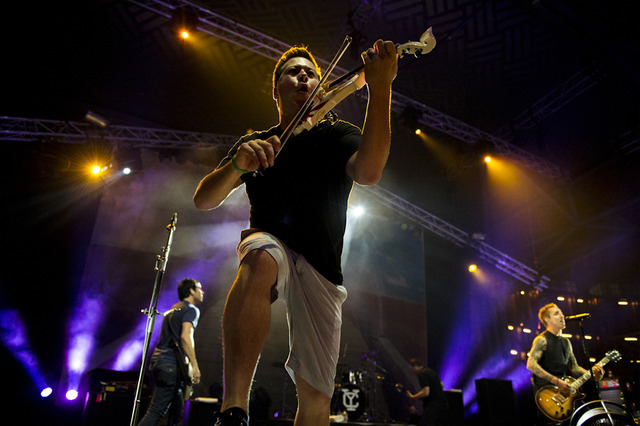 As a band who has been active for a long time, what do you feel is the most important aspect of making music after all these years?

You’ve seen so many cities from all the touring - what’s your favourite one by far?

I'd have to say Tokyo. It was my first international touring destination in 2003. I have been so many times since then. There is something about the energy in that city that I fell in love with.

Name the first thing that comes to mind with these words.

A Rush of Blood to the Head | Coldplay

The record that started me down the path towards them being my all time favorite band.

The Colour and the Shape | Foo Fighters

Probably my favorite rock record of all time.

I am still blown away by the caliber of songwriting on this record.

Leche Con Carne | No Use for a Name

The first punk rock record I was given by a very close friend.

This record opened me up to a whole new kind of music that I never knew I would love.