Few local bands have had the distinctions to release their records on international labels. Naysayers here can carry on about the lack of quality music made here but artists like Wormrot, Kiat and Xhin have proven themselves worthy of being on labels on the other side of the world. Five-piece screamo band Yumi can now add themselves into that league with their debut record Epicureans, finding a home in Dog Knight Productions, an emerging UK post-hardcore/screamo label recently featured on Noisey. Having finished a two-date stint in Taiwan and a record release show here, we speak to them about Epicureans, being under Dog Knights and their top five influential albums!

How are tour preparations coming along?

It’s all good! We only have a couple of weeks for rehearsals and that’s about it. Our friend Kit will be standing in for our bassist Suhayl who couldn’t make it due to work, the transition has been quite seamless. We’ve also sorted out some merch stuff and we can’t wait to join our Japanese counterpart Kowloon Ghost Syndicate for this leg of the tour! Really excited!

How was Taiwan like? What are you guys looking forward to do in Japan other than playing shows?

Well, Mimi our vocalist got his chou Tofu (smelly tofu) there! We went to see some pretty historical monuments on our 3rd day before the show and met lots of interesting characters there. It’s always a good thing to meet people from other countries. You learn a lot from them. People elsewhere don’t live like us in Singapore so it’s always interesting to pick their brain and see what connects and brings us together. We would probably be staying in a friend’s apartment in Japan like we did in Taiwan and to us that is one of the best way to mingle, get close and learn from one another instead of being in a hotel.

Could you tell us more about Epicureans?

The album was recorded in 2012 at Anvea’s studio, Lithe Paralogue within a span of 2 to 3 weeks. The album title is based on the philosophy of the thinker Epicurus. It's aim was to liberate people from fear, not only the fear of death but the fear of life; in an age when all forms of public life were unpredictable and highly dangerous, it taught people to seek happiness and fulfillment in their private lives. Thus us being epicureans, believers of the said philosophy.

There’s no theme on the lyrics, maybe metaphors to life struggles, some of it are also based loosely from the diary of Anne Frank. Most importantly, we want our audience to feel the vibes and intensity from our live set, to hear the honesty of our music; nothing forced or acted. You might not be able to understand what Mimi is conveying during our live shows but the only clue is to read through our lyrics, else to come speak to us to understand it. 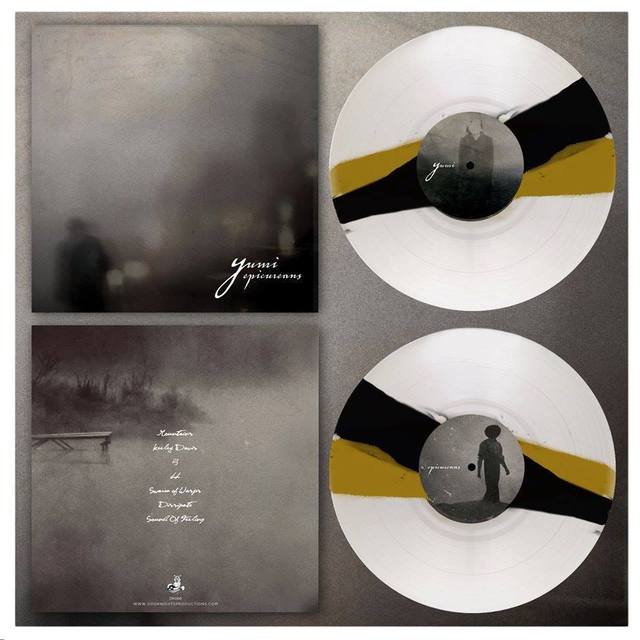 Yumi's debut album Epicureans on vinyl. You can get a copy here, Ujikaji Records or Canopus Distro.

How did Dog Knights Productions get to know about your music?

Initially we wanted to self release the album but figured it would be best to release it under a well known label as we want it to be heard by as many people as possible from around the world. Anvea approached Dog Knights Productions and got a reply from Darren the man himself right away. He got very interested and that’s how we started working together. Really stoked to be able to work with him as he gave us the freedom to explore creatively in terms of the album artwork. Such a wonderful experience working with him.

Have you guys learned anything valuable since being signed onto the label?

That Dog Knights Productions is one of the best in UK! Nothing came easy for them. 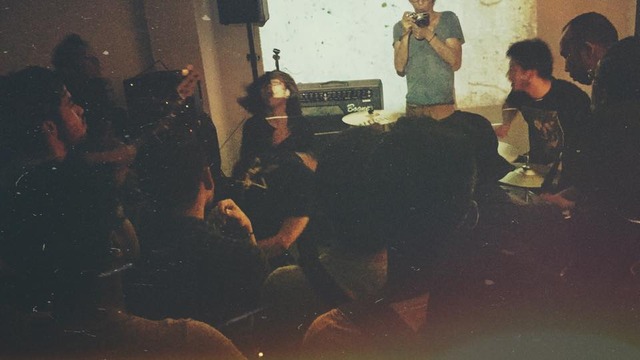 Despite being signed to a label now, do you still consider yourselves a DIY band? How important do you think a DIY work ethic works for a Singaporean band?

Yes. We will always be a DIY band regardless because apart from our label helping us produce the LP and distributing it, we have to do everything else by ourselves. From rehearsing, to recording, getting merch done and booking tours, we do it ourselves. Yes we did get invited to Taiwan for the tour but we still have to coordinate getting money and booking the flights and getting everything else in order. Basically it is part and parcel of being in our type of band. We strongly believe Dog Knights Productions is a strictly independent distribution/ label and for them to help out another small DIY band from tiny Singapore is really a cool thing.

DIY to us is the freedom to explore, to learn and to grow without any constraints; to be independent. DIY ethics is important because we don't need any commercial exposure to progress. We don't need sponsorships and such from big companies. Major labels? "Bigger platforms"? "Exposure?" For what?! They don't care about small bands. All they want is money. That also depends on what kind of music you make. The music we make is not for them - the mainstream. We make it for the DIY hardcore/punk community, we make music for ourselves and that's important. The DIY community is a good channel for hardcore/punk bands to share their music with the world. All thanks to the internet. Yumi is a small band and we are comfortable like this. We are comfortable putting out our own materials ourselves.

What’s next for Yumi after the tour?

We will head into the studio again and record the songs that we’ve already written for the past 2 years, the ones that did not make it into the Epicureans LP. Write new stuff for a split? You'll have to wait and see!

I’m sure there are a couple of other bands that I missed out but the albums listed are the ones that got me inspired to write and got me through a lot of things in life.

1) Godspeed You! Black Emperor - Lift Your Skinny Fists Like Antennas to Heaven (Canada)

3) Mouse On The Keys – An Anxious Object (Japan)

5) Heaven In Her Arms – Erosion Of The Black Speckle (Japan)

We are all inspired and influenced from different music. I'm not really into that post-rock stuff, maybe a little but I don't bother searching for new bands like that. Anyway, those are the five albums that inspired me when writing music with Yumi.

1) Envy - Burning Out The Memories (Japan)

All these albums have killer songs and there’s also quite a variety of style could be found by all the bands. Seriously recommended!

2) Born Against – Patriotic Battle Hymns (US)

3) Heaven In Her Arms – Erosion Of The Black Speckle (Japan)

5) At The Drive-In – Relationship Of Command (US)

These albums play a part in terms of my vocal style and stage presence for YUMI. I like the fact that we can still gel as a band despite the different influences and musical backgrounds.

5) Discordance Axis – The Unalienable Dreamless (US)