Bandwagon Guestwriter is a series documenting specific topics in music, where we invite guest contributors to lend their knowledge, experience and most importantly, their voice.

This time we’ve got superboy himself Adel Rashid who’s been at it in the Singapore music scene since the tender age of 14, forming local post-rock darlings Amateur Takes Control and having his hand in many other outfits including Pleasantry, I Am David Sparkle and more. It is during these formative years as a young music enthusiast that set him on a noble mission to spur Singaporean music to greater heights. Read on as he recounts his personal journey throughout the years with both hands firmly at the wheel, taking control of his destiny built upon miles of hope.

After a year-long hiatus, Amateur Takes Control will be re-uniting for an exclusive one-off performance at the Esplanade Waterfront Theatre tomorrow in Localmotion: Labels Galore as part of the KittyWu Records showcase! Be sure to catch them live in two distinct sets as they perform old classics and newer ones from their recently released compilation album We Are All Amateur Takes Control. 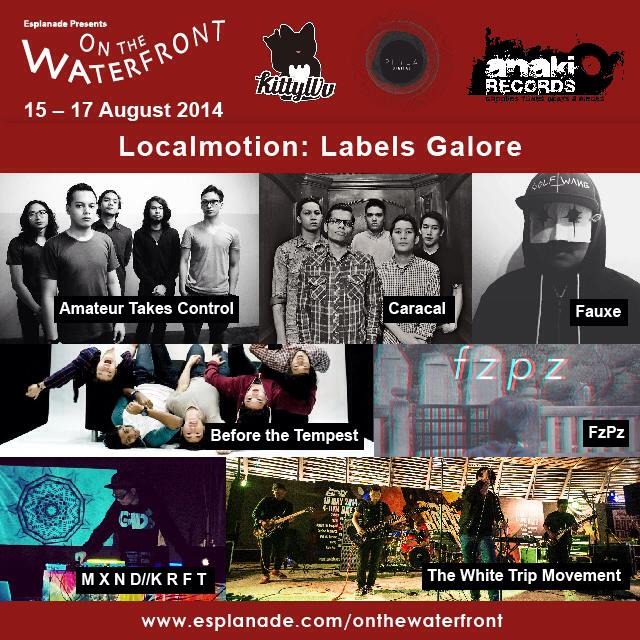 ALL MY TEENAGE FEELINGS

Life was pretty uneventful at age 14. I was a well behaved student in an all-boys school, knew how to play a little bit of guitar, had formed a (not serious) band with a few of my schoolmates playing Metallica and Blink 182 covers - a pretty typical affair for a teenager. The first (and last) show I played with this unnamed band would then end up becoming a pivotal moment in my life. Shortly after, I joined Munchies at Nine having been introduced to the band by my cousin, who sang in the band. Up till then, the only performance experience I had was busking and small studio gigs but I was interested in getting the band to play a proper gig at a venue that could fit a reasonable amount of people, and to play alongside my favourite local bands. In 2005, right before I turned 15, I organised my first show at the old Republic Polytechnic thanks to the folks from Jammerz Arena back then.

It was a whirlwind - why they would trust a secondary school kid to run a show, let the said kid and 10 other bands use all the gear, the number of bands who played at the show - Ronin, A Vacant Affair, Set For Glory, No Direction (now After The Sky), Dyna Turmoil (now Paris In The Making), Munchies at Nine, and One-Eighty were present. Things got quite rowdy - a friend got punched in the face and a most 'mild-mannered' member of the crowd punched and broke a piece of the drop ceiling. Chaos or not, I had enjoyed the experience very much and told myself that I wanted to put up more shows to give upcoming bands a platform to showcase their craft. It's funny because I hear this bouncing around a lot now.

Facebook in 2005 was practically nonexistent so we didn't have the luxury of easily promoting gigs on social media. Instead, a huge chunk of promotion actually involved the bands putting out word about shows on their blogs (yes, Livejournal even), music forums like SOFT, and the mighty MSN Messenger. Placing flyers at jamming studios and local shops such as Straits Records and La Vanita at Peninsula Shopping Center helped a lot. Having said that, word of mouth still is the best way of promoting your show, in my opinion. In the initial stages of doing shows, I had the pleasure of working with the greatest and most supportive bands and people with whom I am still friends with today. And this helped fuel my passion for pursuing music further.

BOTH HANDS ON THE WHEEL

Now that I had my taste in running shows, I thought that I should grasp other aspects of the music trade, which led me to an internship with Wake Me Up Music (WMUM) in 2005. Back then they had a store at Margaret Drive and my duties included handling sales of music merchandise in the store and managing booking for the rehearsal studio. For a 15 year old with no retail background, it was a steep learning curve for me but the folks from WMUM were patient and kind to me and I learnt a lot of stuff especially when it came to dealing with customers and managing a retail store. During my stint at the WMUM shop, I actually had a lot of down time, especially during the weeknights when it was less busy. This led to me trying out the guitar pedals that were on display and this was also when I started writing my first few songs for Amateur Takes Control. 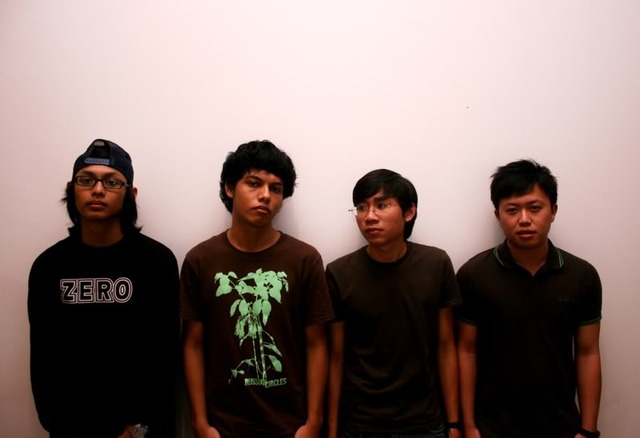 Amateur Takes Control started out as a solo project because I was really just interested in writing music I could be proud of. In mid 2006, I left all my previous bands due to creative differences to focus on ATC. To secure my first show as ATC, I called Razi Razak of Rockstar Collective (RSC) who was involved in Home Club events to ask if he had a slot, and then there I was sharing the stage with Caracal and Hear Me Toby… in an empty club. Still, it was the one of best shows I've ever played.

The sound guy that night was Zahir Sanosi who now happens to be my current bandmate in I Am David Sparkle and the boss of Hail Satan Records. Having been a fan of I Am David Sparkle (IADS), you can imagine how great it was when he told me he liked my music! After that, ATC went on to play 7 shows at various venues and this was the start of the band’s real journey. By 2007, we were in the studios to record an EP with producer Nick Chan and released it independently.

BUILT ON MILES OF HOPE

It was time, we decided, to record an album after getting a lot of exposure from performing. But money was going to be a problem (it's always a problem), because we were still in school. With the help of Djohan Johari (also my current bandmate in IADS), ATC put up a fundraiser show in 2008 called ‘Built On Miles Of Hope’ which was also the name of our second EP. Over a hundred people turned up and we could finally afford to record the album proper. When it was done, we approached Errol and Lesley from KittyWu Records asking them if they would like to put out the album. You, Me and The Things Unsaid was released in October 2008 and this opened more doors for the band. We played even more shows here and even a couple in Kuala Lumpur. It’s safe to say that this album defined the band for a while. We never released anything after and kept playing the same songs over and over again. During this time, I was still running shows for bands, now with ATC on the bill since I liked to see how we would sound next to bands of other genres. 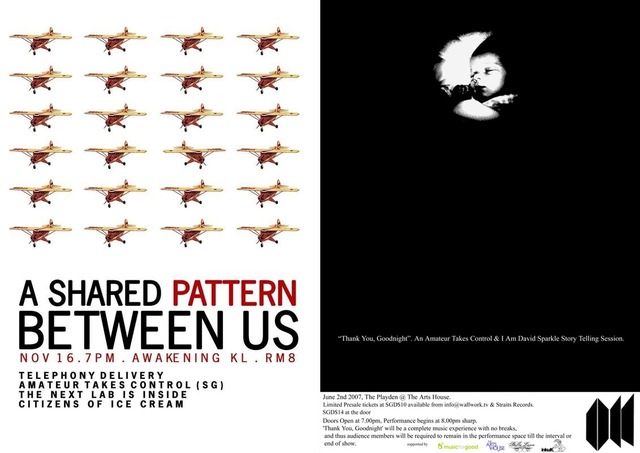 My early months of National Service was quite a downer for ATC, and a couple of members were also busy with personal commitments. At this time, my two bandmates Isa and Ariff started a band called Pleasantry with Samantha, their bandmate from Postbox and Daniaal, Ariff’s bandmate from Lunar Node, and also my cousin. I thought, for a change it would nice to be in a band with vocals, and a fresh start with another band, having to go through the process of playing smaller shows and meeting new people. Pleasantry was and still is self-managed and we often split duties such as show bookings, publicity and finances and we plan to do this for as long as we can handle it.

THE WAY OF THE UNIVERSE

I have been friends with the guys from I Am David Sparkle since I was a teenager and the four of them (Zahir, Djohan, Farizwan and Amran) have been my 'big brothers' who I’d turn to whenever I needed help with something be it personal or music-related so it was an honour to be joining the band in 2012. Unlike my other bands, I Am David Sparkle has been around for a very long time made up of very experienced musicians who have played for Singapore’s finest bands back in the day. All this while I had been the one taking control (haha) and running things so I found my time in IADS to be a change in pace because my role in the band is mostly on the creative level - the managerial duties are handled by Amran and our label KittyWu.

I'LL SEE YOU WHEN WE'RE BOTH NOT SO EMOTIONAL

Alas, things took a turn again when in mid-2013 I got offered a place to study music business at Columbia College Chicago. I took it up after going through one of the toughest times of my life trying to secure funding. And then I finally left for Chicago in August. Many people have told me that what I was studying something ‘obvious’ since I’ve been involved in the music scene for years. Well, they're right to a certain extent but I didn’t choose to travel halfway across the globe for institutionalised education. Having been there twice, I saw similarities in the independent music scene with ours - numerous talented bands of different genres working hard to spread their music to a bigger audience - and I felt that I could learn a lot from it. Of course, Chicago itself has had a long history when it comes to music and the support system (labels, booking agencies, show promoters) for local music goes way back. However, it’s still very much driven by the local community at large, rather than corporations. That’s pretty similar to what we have in Singapore which is pretty much driven by people who are passionate about local music. We’ve got a long way ahead of us and nothing can go wrong if we keep supporting one another. 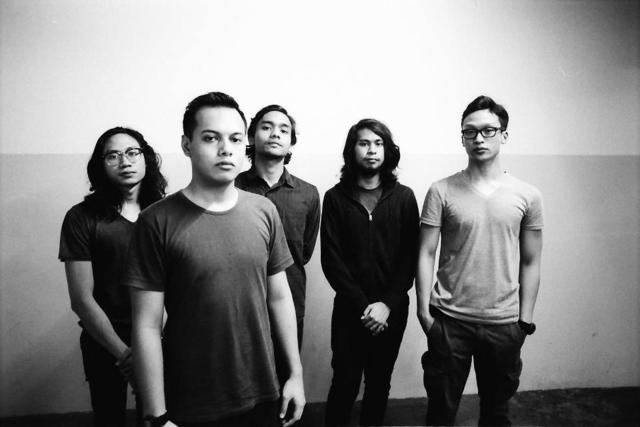 WE ARE ALL AMATEUR TAKES CONTROL

I’ve been very blessed to have grown up in a music community where most people actually care about their craft and do it because they love it. Since I began playing shows and being a part of numerous music events, I have met the greatest people who have contributed a lot to everything that I’ve been a part of. Some really special ones include Razi Razak who showed me the ropes and shared his experiences with me when I was still starting out doing shows, the guys from I Am David Sparkle who have been brutally honest with me and having my back all these years, Errol and Lesley from KittyWu Records who believed in me and for letting me always help and learn at their shows. My family, bandmates and friends who are the reason why I am even doing music in the first place. There are way too many people that have been a part of my life in music and many of these people are the very same folks that are the reason the Singapore music scene is the way it is now - getting better and better every day.