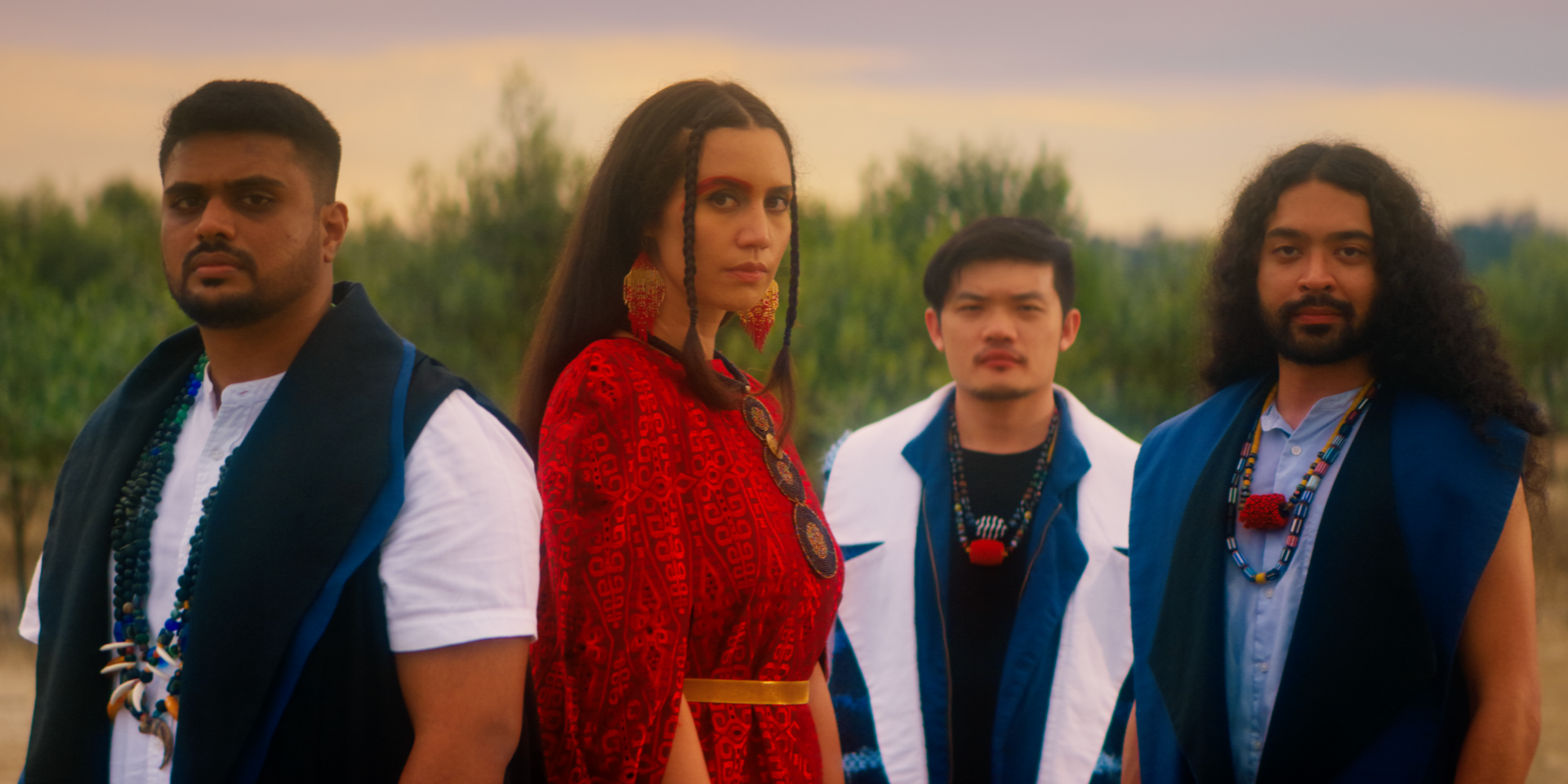 A proud member of the Dayak Kelabit indigenous people from Borneo, Alena Murang's brand of traditionally-inspired music has helped place her culture front and center on the global stage.

The inimitable Sarawakian singer-songwriter and expert player of the sape' (a tribal lute instrument) released a spellbinding music video for her instrumental track 'Warrior Spirit' on May 27. The track comes off her latest album Sky Songs.

Steeped in heritage and cultural significance, the visual finds Alena in the middle of an entrancing dance performance by a company of young, traditional dancers. Interspersed by scenes of her band members playing along to the rock-tinged tune, the video is rich with meaning and well captures the beauty of Alena's indigenous background.

Bandwagon caught up with director Sarah Lois Dorai to talk about the heart behind this culturally immersive music video for 'Warrior Spirit', her experiences working with cousin Alena Murang and the crew, as well as the challenges behind filming amidst tight COVID restrictions.

Hi Sarah, what were the sources of inspiration behind the music video for Alena Murang’s ‘Warrior Spirit?

Hi Terry! I think for starters, the music itself served as the main source of inspiration. The tune, as explained by Alena, “was inspired by a folk tune for the traditional male warrior dance of the Orang Ulu people, [and those who performed it were] mostly from the Kenyah and Kayan people. It tells of the warrior watching the mist rise above the mountains on the morning of battle.” That became the starting point for the visual imagery we were about to create.

Secondly, the unique identity that comes with having indigenous heritage also inspired me. There is so much culture and tradition that we can not only draw from our ancestry, but also choose to infuse them into who we are today. I wanted other indigenous people to watch the music video, recognise their culture, identify with it and feel unapologetically proud to be who they are.

How have you infused the message of ‘Warrior Spirit’ into the concept of this music video?

Though we ancestrally descended from headhunting warriors and have since long moved past that practice, we still carry within us their unbreakable spirit. Except, this spirit isn’t always demonstrated with a rah-rah cry as we charge into battle. Sometimes, it is a quiet determination and deep-rooted conviction that keeps the flame alive in us.

This is my take on what a warrior spirit can look like today: gentleness. We see this in the soft and gentle movements of the dance choreography which juxtapose against the concept of a fighting warrior. This puts into context who we are culturally as a people in this day and age.

Tell us more about the dance that was performed in the music video. What did it symbolise?

From the get-go, we wanted to pay homage to the traditional practice of mass dancing. So even in the choreography that was done by Munirih Jebeni, Naz Manterang and Alena, we made sure to keep it to mostly traditional dance steps from the Orang Ulu's ladies hornbill dance and male warrior dance.

Metaphorically, the image of Alena being surrounded by a large group of people was meant to represent the strength that one finds and draws from community. It is a central value in indigenous people groups and I wanted that to come across in the music video.

How were the dancers featured in the music video chosen, and what was it like working with them?

We put out a call for people who had knowledge of basic Orang Ulu dance steps. No professional dance qualification was necessary. Anyone from any background was welcome because, above all else, we wanted to share our heritage with people. And we believe that begins from the creation process.

The dancers were an amazing bunch to work with. They not only brought their best but they braved through the scorching sun and unending rain with us. We couldn’t have asked for a better group of people to work with.

The identity, psyche and culture of indigenous peoples are very much intertwined with their lands. So when crafting the visuals, Fabian Joseph (Director of Photography) and I knew that we had to look for a location that's not just visually beautiful for aesthetic purposes, but also had enough resemblance to the forest and skies that are part of the entire native identity.

I have to say Fabian brought the visuals to a whole new level that I could have never imagined and made the locations an absolute feast to the eyes.

What was it like working with your cousin Alena on this music video? In what ways did she add to the final product of the video?

Working with Alena is always a fun process because she pretty much lets us at Project Room do anything we want! She knows that the entire team and everyone else who comes on board will push boundaries to take the film as far as it can go creatively. But I also think that firstly comes from a mutual understanding of what we want it to ultimately say and stand for.

Alena is very much in tune with the culture and sensitivities that come with it. I think that she was a good anchor in making certain decisions, such as deciding against wearing some things that we knew were ceremonial or more sacred to a certain group so as not to be disrespectful. I think her being discerning about these little things made a huge difference to the film.

How did COVID restrictions make this shoot more challenging than previous ones? What did you do to overcome these difficulties?

COVID restrictions made it exceptionally difficult to pull off this shoot. We had multiple lockdowns throughout last year and this year. We had very small windows of time when we were permitted to be shooting with such a large number of cast and crew members. We postponed our shoot dates several times. We shot over three days — two in 2020 and the last day in April 2021. The entire project took up to a year to complete because of it!

In the end, the delay turned out to be a blessing because we were able to release it just in time for Gawai, the Harvest Festival, when most were unable to return back to their villages and hometowns to celebrate with their family. 'Warrior Spirit' came at a time when they were able to draw strength from it and be reminded of home. We were so glad to be able to make that tiny bit of difference for them.

The team behind ‘Warrior Spirit’ also worked on Alena’s previous music video ‘Midang Midang’ in 2019. How has the experience working with the team changed over the years?

The working dynamics of any team improve over time as you begin to understand each other. There is a better sense of camaraderie which enables us to focus and push our work further subsequently. You need to trust your team and that is pretty much what happened here – you can see that translated onto the screen.

Both 'Midang Midang' and 'Warrior Spirit' had its separate challenges. But I think what did remain the same is that every single person in the team gave it their all. Everything you see in the film – they were the ones who made it happen.

Lastly, what do you hope viewers would take away from watching this music video?

I hope that this film awakens the warrior spirit that lives in all of us, reminding us of who we are and where we come from. That it would inspire us all, no matter our backgrounds, to take pride in our heritage, understand its value and relevance in our lives today, and share it with the world.