In recent years, a number of major music festivals have cropped up in Singapore with the likes of Laneway Music Festival, Camp Symmetry and to an extent, Hostess Club Weekender. But so far they've all been focused on big-name international acts. Kudos has to be given to the people behind Laneway earlier this year for including local names such as The Observatory, Vandetta and Gema in the lineup, putting them on the same stage as the rest of the international bands.

100 Bands Festival came out of nowhere as a community music festival curated by The Rockstar Collective, in collaboration with People’s Association's BANG! BANG! WONDERLAND - an Aljunied cluster Arts playground. It arrived with an unrivalled vision to celebrate and highlight homegrown music acts 100%, featuring strictly Singaporean creative talents old and new, no matter the genre of music. An important thing to note: this is not a display of Singapore's top 100 bands, but a symbolic celebration of local acts.

Other local music festivals such as Ignite! Music Festival, Tones and Baybeats have also been championing local acts in their lineup, but 100 Bands Festival takes that concept to the next level by amplifying it in terms of sheer scale, volume and ambition. It's a concept so large that it had to be split across three weekends. What does it actually take to actually run a show of this magnitude? Who are the actual people making sure everything runs smoothly? We investigate. 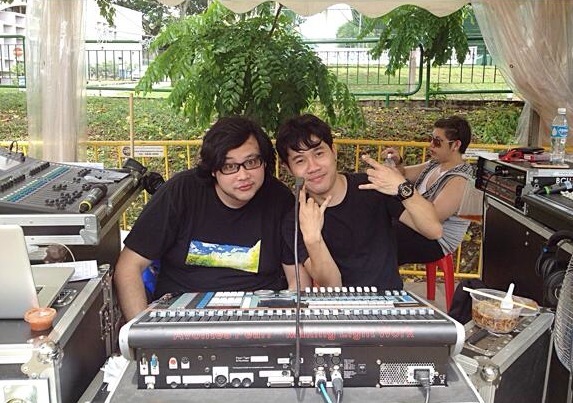 The gears start grinding early in the morning at 8.30 AM, where the BCUBE Entertainment technical crew arrive at Kovan Hub to set up the stages for the show, making sure all the equipment are patched and placed properly on stage before commencing a line-check. BCUBE's operations executive Glenn Ong takes charge stage-side as the technical project manager and the festival's sound engineer. Two other engineers flank him by the console, providing the much-needed assistance to ensure the smooth running of the show's son et lumière.

Soundcheck begins at 10 AM and two figures stride over to the sound booth and speak to Glenn. It is Juhardi Mohamed and Hanis Isahak (of Spacedays and sub:shaman), both members of local arts and music collective Dunce, both project managers of the festival - and quite possibly the two most crucial figures involved in 100 Bands Festival. They say their hellos to the few bands that have just arrived at the location, and warmly welcome them towards the stage, ensuring that all their needs are settled. The sound bounces from stage to stage, with every subsequent band's sound check taking place at the opposing stage. 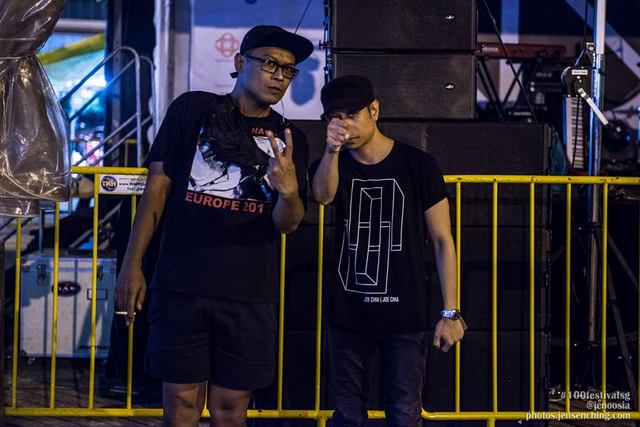 Meanwhile, another group of people converges at the Old Hougang Bus Interchange - it's The RSC and its various affiliate arts and music collectives Dunce, Canopus Distro, Statement and Crüe. They look listless and heavy-eyed, but undoubtedly ready for the start of the weekend. Festival director and The RSC head-honcho Razi Razak gathers the crew and starts the briefing, running through the program for the day while Juhardi and Hanis delegate and assign jobs to each person, making sure the distros and merch booths are set up and running by the time the show kicks off at 12PM. Everyone takes their position behind the tables and beside the stages, kopi kaus in one hand and cigarettes in the other.

The festival preparations actually begin well before the weekends, Hanis remarks. Technical riders have to be collected from the acts, stage plans have to be drawn out, and production schedules have to be ready and sent out to everyone involved. Juhardi keeps the buzz for the festival ongoing throughout the week, publishing posts and relevant music videos on the Facebook event page regularly. On show days, both ensure that bands arrive on time so that there is enough time for all the producers to prepare before the band's set. As the programme is continuously running, this process never stops for the entire day. Communication is key it seems, as the both of them continuously pass information to the other stage managers through walkie-talkies. 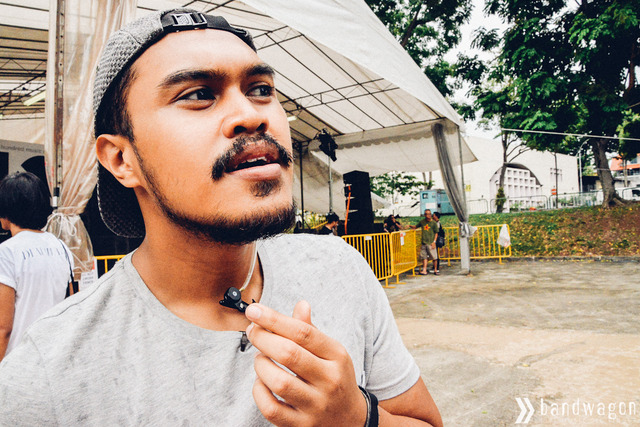 Undoubtedly, difficulties seep through the cracks, even in a well-oiled operation such as this one. Speaking to the various people working behind the scenes, they all seem to agree one thing: the weather has been a total bitch. "For the first weekend, it was crazy hot and it just puts everyone in a bad mood, which in turn results in a more stressful working environment", stage manager Nurudin Sadali (of .gif) reveals. "Things sometimes can get unnecessarily tense, but it gets better as soon as the sun sets". Fellow stage manager and bandmate Chew Wei Shan (of .gif, sub:shaman and Weish) agrees, attributing the scorching hot and humid weather in making people falling sick and becoming irritable. "Festival-goers seek shelter in the interchange which is not a bad thing, but I do feel for the bands performing to very few people on the grounds because of the weather", Hanis comments. 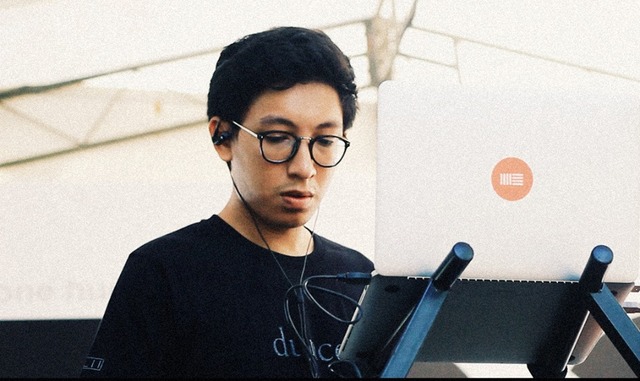 For Glenn, the erratic weather also greatly troubles him during the ongoing operations. "I have to keep a constant look out for rains and strong winds - even while I'm mixing the band", he says. "I have to inform my stage crew to cover the stage to prevent weather damage in case of imminent storm". In the sound engineering aspect, he has to keep the sound level in check - 100 Bands Festival does take place in the heartlands after all. "We have to keep to a certain volume so as not to disrupt the peace of the residents around the Kovan area".

Looking around the festival grounds, a varied bunch makes up the audience. The crowd ranges from the regular hipsters to the most grizzled hardcore music fan, from seasoned gig goers to curious Kovan residents with children in tow, and all of them are genuinely enjoying themselves. It is most amusing watching them ping-pong from stage to opposing stage as each new act begins as soon as the previous band rings their last note.

Glenn thinks that the festival is a huge success so far, while Juhardi wishes there were more people attending the event, even though the past days have seen a respectable amount of audience cheering the bands on. Razi looks on and notes that the community is ready to acknowledge our local music subcultures, beaming wide with pride watching The RSC's seven collectives working together passionately for the festival. "We work on many limitations with budget and equipment but the spirit of the music community here at 100 Bands has been very good over the last two weekends." Hanis reflects while checking his watch, always careful of the schedule - which so far has been remarkably on time, every day of the festival. 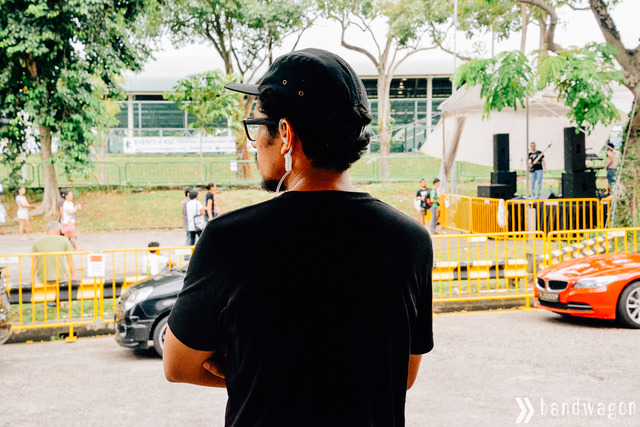 Moments and memories last infinitely, and it's something that the folks running around behind the scenes have been grateful for the past couple of shows. Both Juhardi and Hanis expressed their pride and joy seeing the various bands, crew and production team work hand in hand with one another to produce consistently good sets.

Nurudin and Weish both remember the little unexpected things that happen in the midst of the crowd - aunties and uncles headbanging, random folks coming up to them to give thanks, and little children air-drumming and air-guitar-ing while watching the bands play. "I thought that was awesome and I sincerely believe that by exposing the next generation to good local music, we’re sowing future local musicians", Nurudin remarks. "In my mind I play out an involuntary fantasy: that a small part of them has been awakened to local music, and has decided to somehow be a part of it when they are older", Weish laughs. Clearly, it is positive vibes and good friends (and a lot of coffee) that have kept the crew going relentlessly over the past show days, and something that Juhardi is most happiest about. "We're all suffering together, but it's all for a good cause - to keep the music and arts scene alive", he says.

Glenn and Razi attribute their passion for the industry that keeps them going in these long days. "We have been trying the very same set up of having two stages for the last two years with Identite at Home Club", Razi remarks. "To be able to do it in a larger scale with 100 acts over three weekends is probably an exciting growth to experience". Glenn expressed his commitment to the BCUBE motto of ensuring quality sound while recalling the fun, jokes and laughter with the rest of the people running the festival; all of which have helped him through the long, hot and humid hours at Kovan. 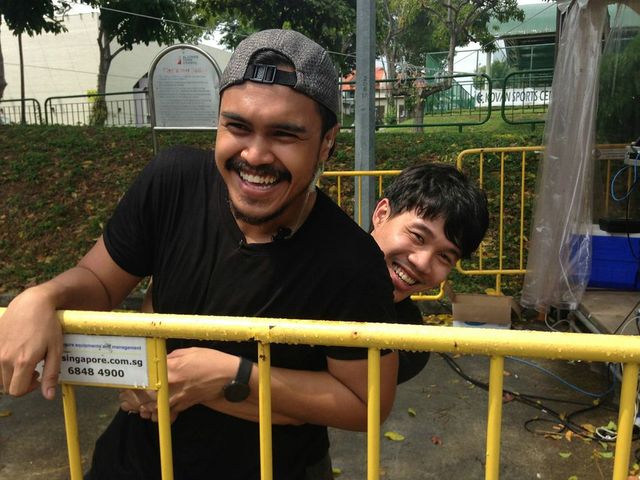 Night gathers and the crowd thickens considerably as the air cools down. Juhardi and Hanis are still seen bouncing around all areas from the stage to the sound booth to the distros, making sure everyone else are doing okay. By the last act of the day, we spot Juhardi sitting down on the concrete ground, slumped against the yellow steel barriers, visibly worn-out. For him and the other crew members, it'll be a few more hours before they can retreat to the warmth of home - they still need to assist with the crowd control, clear the rubbish and litters left behind and attend a debrief. It's been a rough Saturday, and it starts all over again the next day. Considering the sacrifices they all have to make for 100 Bands Festival to happen, what is the message are they sending out to the local community? 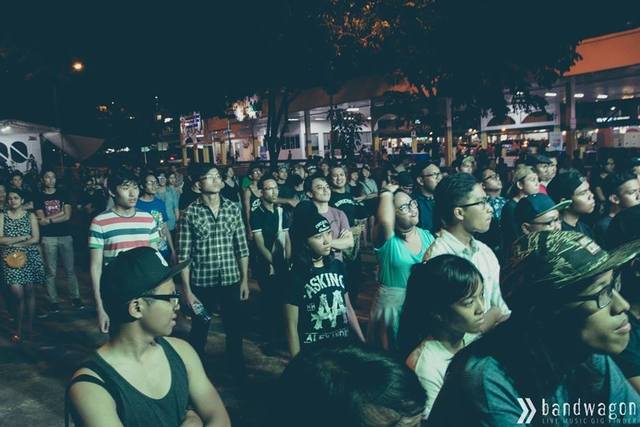 "The curation of this festival is one that believes very strongly in up and comers of the independent music scene. We have a huge variety of bands playing different styles of music and it's all a matter of discovering bands", Hanis explains. Weish exclaims about the staggering amount of local arts and music talents which are worthy of everyone's attention. "When you realise how good it is, you’ll want to join us in celebrating and supporting it as much as we can", she continues. Nurudin agrees, maintaining the existence of good local music that are worth listening if you actually give them a chance. Regarding the questionably grandiose scope of the festival, he only has this to say: "There’s no such thing as being overly ambitious, so… go big or go home".

As the largest online database of live music happening in Singapore, the festival represents everything that Bandwagon has been advocating from the start: the local music scene is well alive and kicking. Live music gigs - no matter how big or small, regardless of genre - are happening everyday here and it disproves any cynical presumption that there's hardly anything interesting in Singapore's creative scene. 100 Bands Festival just might be Singapore's biggest local music showcase yet and an extremely positive sign of how far we've come as a blooming music community. It's something that all of us Singaporeans should be proud of, and it's something that all of us Singaporeans should get behind. 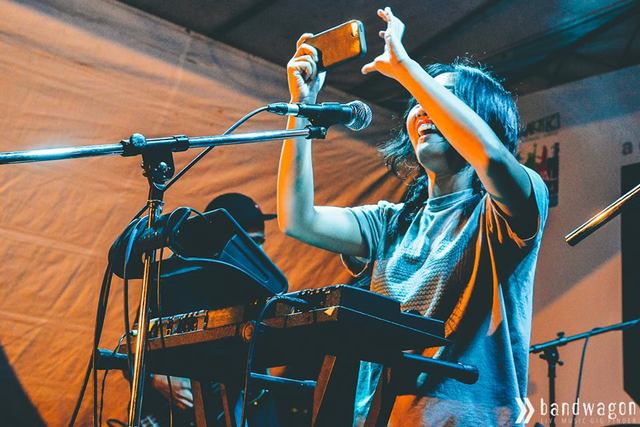