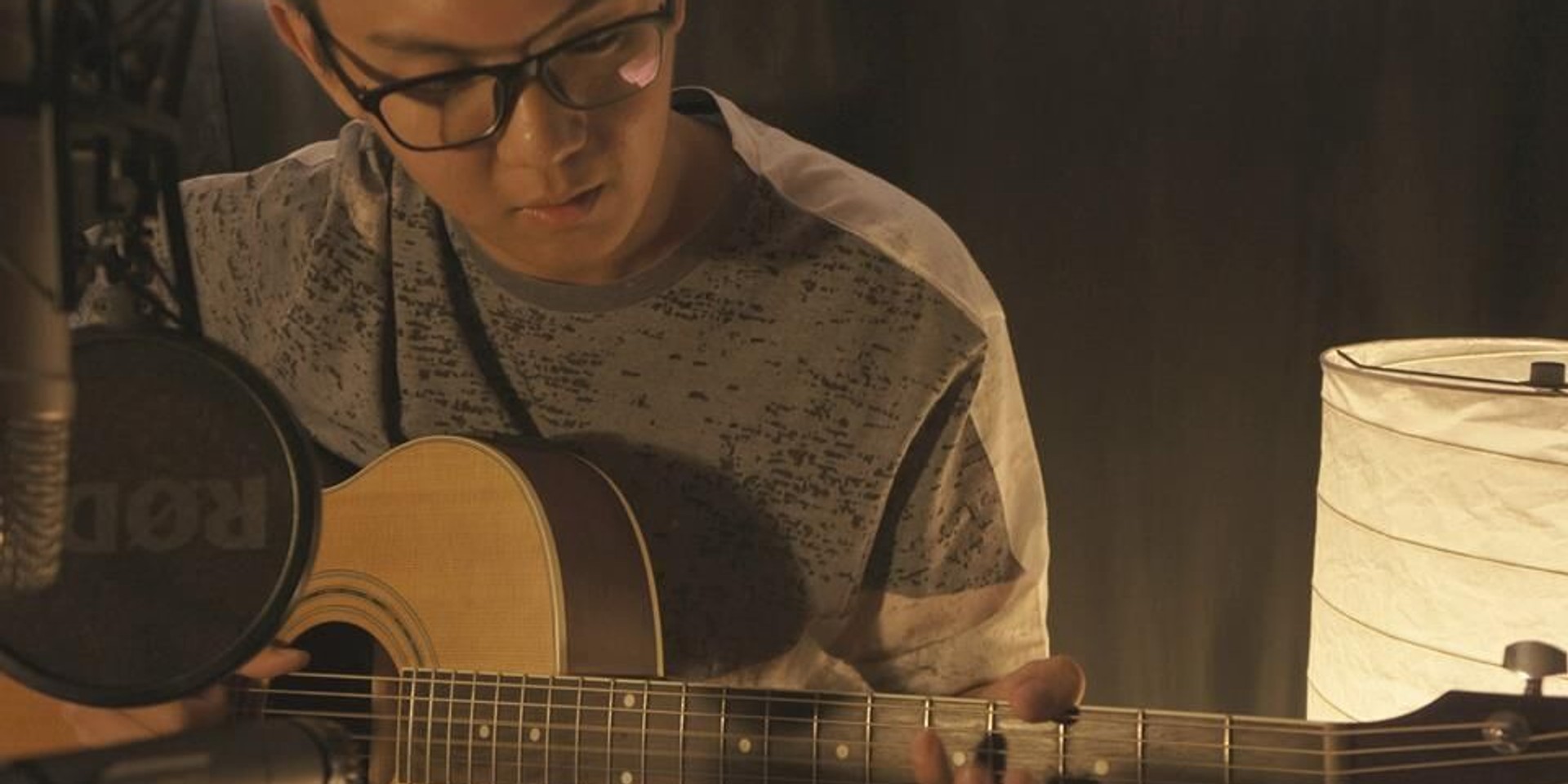 Amongst the delightfully eclectic lineup of Neon Lights, which boasts an array of newly-minted acclaimed acts and modern trailblazers, there lies a name unfamiliar to most — but one that may just leave a lasting impact in the months to come.

Introducing Bennett Bay, a fresh-faced 20-year-old Singaporean who, despite having performed only three times in his four years of writing and performing music under the project, was selected to appear at the festival's maiden outing this November. Despite his placement in a festival that's set to provide an evening's worth of sensory overload, complete with art and comedy performances, Bennett Bay's strength lies in tender melodies — driven by his fascination with the emotional dynamism of post-rock, along with the foundation of imagery purely driven by instrumentation.

Though many influences inform him, where Bennett Bay begins is in an area with nary a blueprint — harder for the imitators, but inspiring for the artistically invigorated. Bennett Bay clearly falls in line in the latter, judging from his (admittedly scarce) output and vivid, heartfelt ideas he shares with us.

We speak to the wide-eyed, classically-trained musician, whose performance at Neon Lights will include a nine-piece ensemble bringing his songs to life on the live stage.

Hey Bennett. Tell us a bit about yourself!

Hey Bandwagon, sure! My name is Bennett, and I'm a musician/composer from Singapore. Currently, I'm waiting out the days until its time to go into university and further my studies with music. Apart from this project, I'm currently playing bass in an instrumental trio called Hauste that a couple of my closest friends and I formed recently. I've been playing music since I was 8, when I first picked up the suona in primary school, and I've been writing my own music for about four years now since 2011.

Tell us about how you started writing and recording music.

I first started writing music when I was exposed to a composition course in my school at the time, School of the Arts (SOTA).

It was great being exposed to writing music graphically, but I was writing just for the sake of it. When I really started writing my own stuff, it was when a friend of mine named Jarod introduced me to (seminal post-rock band) Explosions in the Sky. At the time, I thought their music was the best thing I'd ever heard — I'm sure many of you have felt the same way, with this band or any other — because it connected with me in a way music had never done so before.

From then, I started writing my own music in many different genres, but it was only until I wrote the song 'Sundance' for a close friend of mine that I started to realise that this genre and this style of writing was something that felt right and natural. I started writing more and more songs (most of which came through one take improvisations), pouring my everything into guitar melodies, string parts, horn parts and lyrics.

What was the turning point when you decided "I should be doing this"?

The real turning point, what made me really think before deciding to take this seriously, was about a quarter through 2015 when a friend of mine told me to grab all my fears by the balls and just do it — emphatically with Shia-esque gestures. Before this I was just been bumming around and afraid to take the next step, to bare my everything for the world to see.

What he said got me thinking, and I started to think about the bigger picture. The more I thought about it, the more I realised my thoughts were leaning towards the question, "Would it really matter if I did or didn't do this?" I realised then that "I should be doing this" when I came to this conclusion: every small thing that happens in this world matters. So if the majority of the population wouldn't take notice, at least some will.

What's at stake in the world are the lives of people and the connections that are forged between them, in my opinion. If music can be the bridge towards healing and stronger interpersonal connections, then maybe there's a slight chance my music can do that too, and I'd want nothing more than to play at least a small part in that role — no matter how insignificant.

Are you primarily self-taught or did you receive a formal education?

I'm self-taught in instruments such as the guitar and bass, but I had formal instrumental tutelage for the suona which is like a Chinese trumpet. I did, as well, receive a formal musical education in SOTA (which includes history, theory, performance and much more). 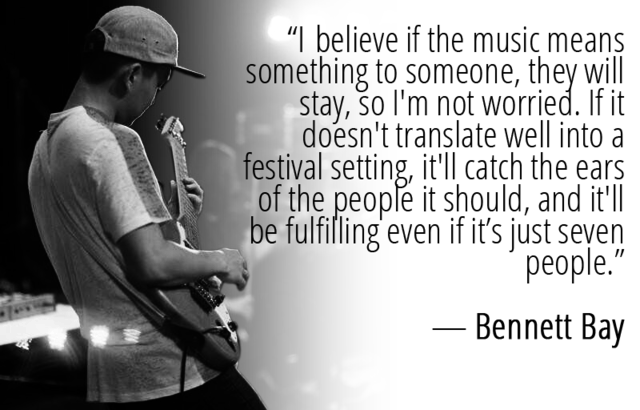 So how does it feel being on the Neon Lights line-up?

It's an incredible honour, I still pinch myself everyday. I can't really believe that I get to share the stage with all these amazing musicians and bands that I've looked up to and admired for the longest time.

The line-up is so well-curated, and the credit goes to the brilliant organisers and people involved in bringing these artists in. I mean bands like Daughter and Mogwai on the same stage? It's insane. It's great as well to be playing alongside Hanging Up The Moon, Paint The Sky Red and Lost Weekend — three stunning local acts that I've been so amazed by and have had the pleasure to watch and sigh from afar.

This will be my fourth time performing in public for this project. I'm still nervous every time I'm onstage, and it'll be even more scary this time round considering the size of the festival.

How are you preparing for it?

I've just been practicing whenever I have the time. I have the luxury of a nine-piece ensemble for this performance this time, composed of the nicest friends who are, as well, some of the best musicians I know. We'll be rehearsing throughout the month, making sure that everything is as perfect as possible. I've been meditating a lot too which helps with the nerves.

And by meditating, I mean sleeping.

Are you worried that your intimate brand of music may translate differently on a festival stage?

Initially! There will be so much going on in this festival, and I was worried that the genre and the style — coupled by the fact that I'm literally a nobody — might push people who were expecting something more upbeat and dance-y away. But I believe if the music means something to someone, they will stay, so I'm not worried. If it doesn't translate well into a festival setting, it'll catch the ears of the people it should, and it'll be fulfilling even if its just seven people.

What kind of imagery drive your music?

Although I wouldn't say it's the imagery that drives my music, but it is the root! Images of mountains, hilltops, greenery, a clear blue sky where the sun is covered by the clouds (most of which i make up in my mind). Images of things that i see and experiences everyday, the housing estate i live in or the park across the street. The sounds of birds, of cars moving, leaves rustling, wind bustling, of rain as it lightly falls onto the streets or as it violently pours on my head. The feeling of touching a warm blanket on a cold day, the sweat that beads down your chin on a hot one. The way your heart beats when you hug someone you love, the way it hurts when you lose someone you hold dear.

These images translate into feelings and emotions for me, and these emotions primarily drive my music.

Do your songs tell a story?

Most of them do! They tell stories that I've made up, dreams I've had, or things that I've experienced in everyday circumstances. The stories are meant to portray subtle (or not so subtle) themes that I'd like to express.

Which track means the most to you so far? Why?

Right now there's a song that I wrote called 'Compass'.

It's a song about a boy who's lost, and he's trying to find his way back home. I meant for the song to be read in a few different ways, and that's what I love about it, because it encompasses all of what the song means to me. It can be about the fear of insanity, of literally being lost, or being lost in life and trying to find your way back on track. I've had all these fears for the longest time — I still do — but it's as if I've flushed a little bit of them out by putting them into this song.

Where do you see this project going in the next year or so?

At the moment, I have no expectations of where it will go or what it will become in the next year.

I'm about to start recording my first EP in the middle of November: it's a small little project I've been wanting to do for a while to kickstart things. The plan for now is to eventually release an album next year. It's quite like a concept album and it's really important to me, so that will be the goal for now.

Obviously though in the long run, beyond the next year, the hope is for this project to eventually go somewhere, to reach the people it needs to reach and make any kind of impact it can, to its fullest extent. I don't see it happening any time soon, and it may not happen or take off at all. Yet even if that's the case, I don't ever want to stop.

Bennett Bay is set to perform at Neon Lights Festival on November 29. Find out who else is performing at the two-day festival, happening at Fort Canning Park.