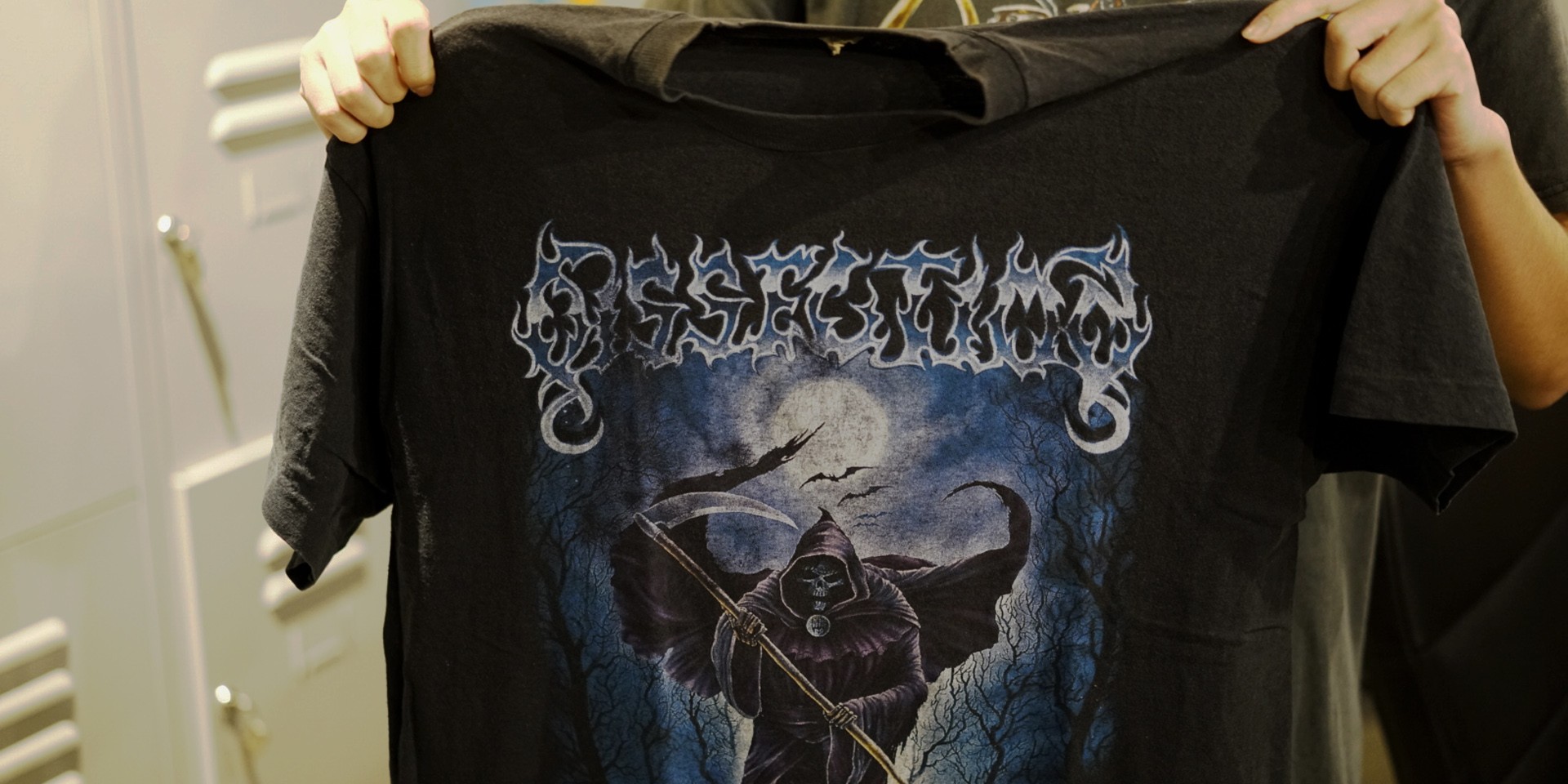 One of the most interesting (and contentious) moves in modern fashion is the proliferation of vintage rock t-shirts.

It's not hard nowadays to find supermodels sporting tattered Iron Maiden t-shirts, or H&M stocking band apparel facsimiles next to dapper pastel shirts. The band t-shirt has always been a sacred thing amongst rock devotees and metalheads: it's both a public display of fervour and a go-to outfit for any concert.

It's the easiest way to spot a Slayer fan on the street, and with the communal aspect of metal well and alive, it's a practice still lovingly embraced to this day. Certain fans go a level up with denim vests decked out with band patches, but the band t-shirt has been an everlasting constant in a tectonic and diverse rock culture.

Which is why fashion trends absorbing the band t-shirt look have understandably drawn the ire of its most guarded practitioners — especially with the short-lived hashtag #metalisnotafashionstatement — and its most reverent icons. Fashion brands like MadeWorn and Fear Of God studiously imitate band t-shirts that survived the 90s — down to the soft, worn-out cotton material — and accomplished designers chase the jagged, mutilated aesthetic of thrash and death metal band logos for their own original designs. 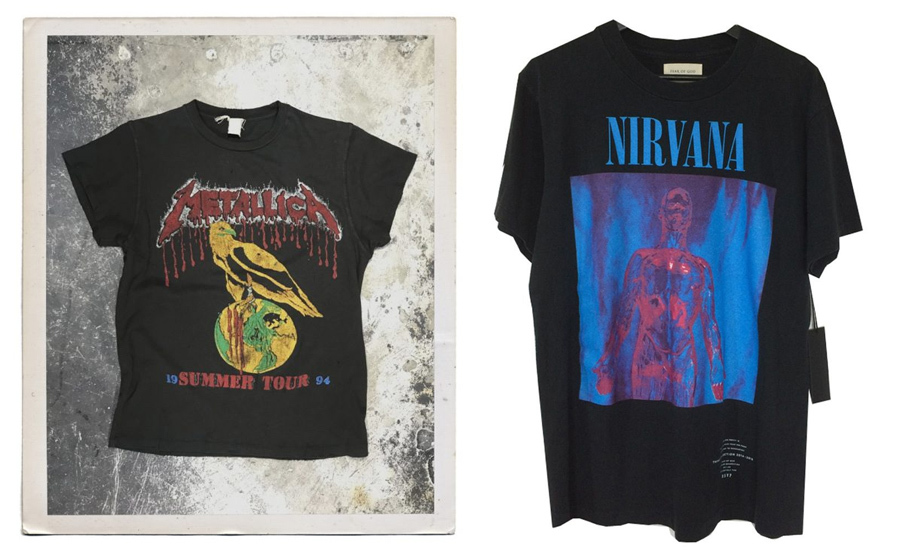 A custom Metallica t-shirt by MadeWorn (left), and a Nirvana piece by Fear Of God, the same label responsible for Kanye West's Yeezus merch line in 2013.

As heavy metal's legacy expands with each passing year, older band merch becomes increasingly rare and, as a result, much more expensive to acquire. They're now much-coveted items, either as a bold fashion piece or the missing piece in a devoted fan's collection. But with the ever-reaching access of social media, purchasing these items has become much easier.

On Instagram, there's a fraternity of dealers doling out a growing catalogue of t-shirts in varying condition — if you'd like an official Morrissey t-shirt promoting his 1992 album Your Arsenal, it's yours for £139 (US$198), thanks to UK-based seller Teejerker. Or if it's a tattered Morbid Angel original, complete with that much-coveted vintage fade, that will set you back U$125 from reputed San Francisco collection Never Gonna Turn Down Again. The iconic green Sonic Youth Dirty t-shirt? US$350 by one of the most prolific names in the business, Tyranny + Mutation.

All three maintain sleek and accessible websites to browse and purchase their items from, but Instagram is where they're able to cultivate a following and communicate with customers. One of these dealers active on the platform is Joshua, or as he's known to his followers, causeofdeathvtg.

The 24-year-old Singaporean student has been maintaining his account, named after the classic 1990 Obituary album, as a means of dealing vintage t-shirts he sources locally and overseas.

A metal fan since his teenage years, Joshua has been a regular collector of metal t-shirts, but didn't get into the vintage game until he discovered scores of them at vintage stores in Australia. Making the most out of his trip, he steadfastly gathered a pile of t-shirts, even ones of bands he wasn't a fan of. Preferring bands on the extreme side of the genre — think death metal and black metal, and less Metallica and Aerosmith — he noticed that some of these t-shirts would still be worth bringing back home to sell. 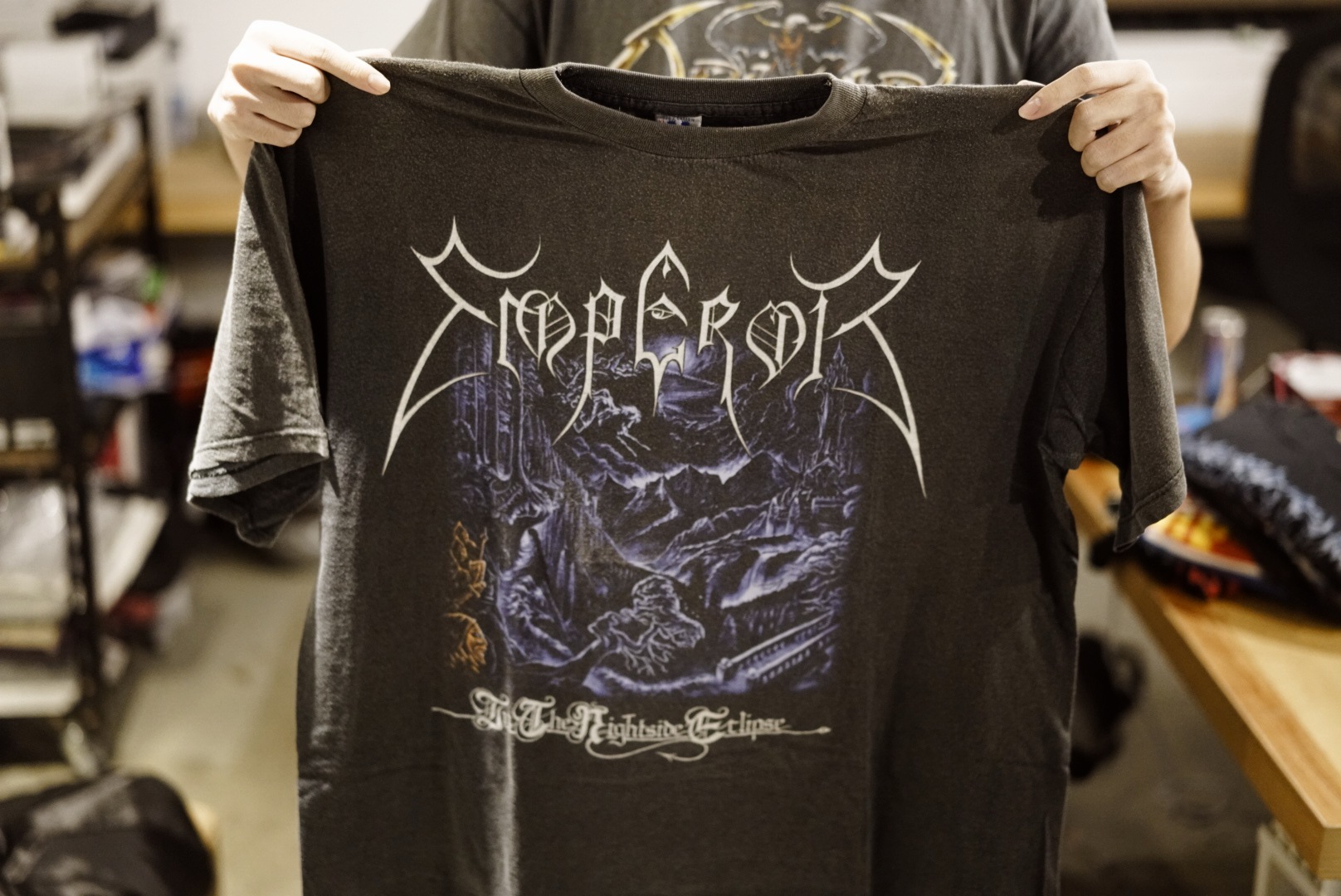 A piece by black metal band Emperor, which Joshua counts as his favourite piece thus far (and a popular item on his store).

Acquiring more t-shirts online, the business student was able to build up a sizeable and diverse collection enough to begin selling over Carousell, where some of his prices were too intimidating for certain potential local buyers. Sizing up to international buyers via Etsy and Instagram, it was there where causeofdeathvtg picked up.

But as clothing that's essentially used and abused, why are these shirts fetching high prices? Similar to the trade of vintage baseball cards and vinyl records, a shirt's price depends often on rarity and history.

"It all boils down to doing research," he says. "You also have to see exactly how rare and how vintage the item is. I check the prices that other resellers are putting the same design up for, and use that as a ballpark figure. The more rare and vintage, the higher the price."

So how does Joshua determine whether an item is a vintage piece and — in an industry where t-shirt bootlegs can easily be passed off as genuine under less discerning eyes — the real thing?

"For most of them, there are a few factors: the most obvious being a copyright license tag and the stitching," he explains. "For American merch, the ones from the 1990s are usually single-stitched, whereas new merch is double-stitched. The European march from the 90s were already following the double-stitching trend, so that one’s a bit tougher to distinguish, but the copyright license tag should still be there. There’s a database online that helps too, this website will tell you if a shirt is authentic or not. They’ll tell you what to look out for." 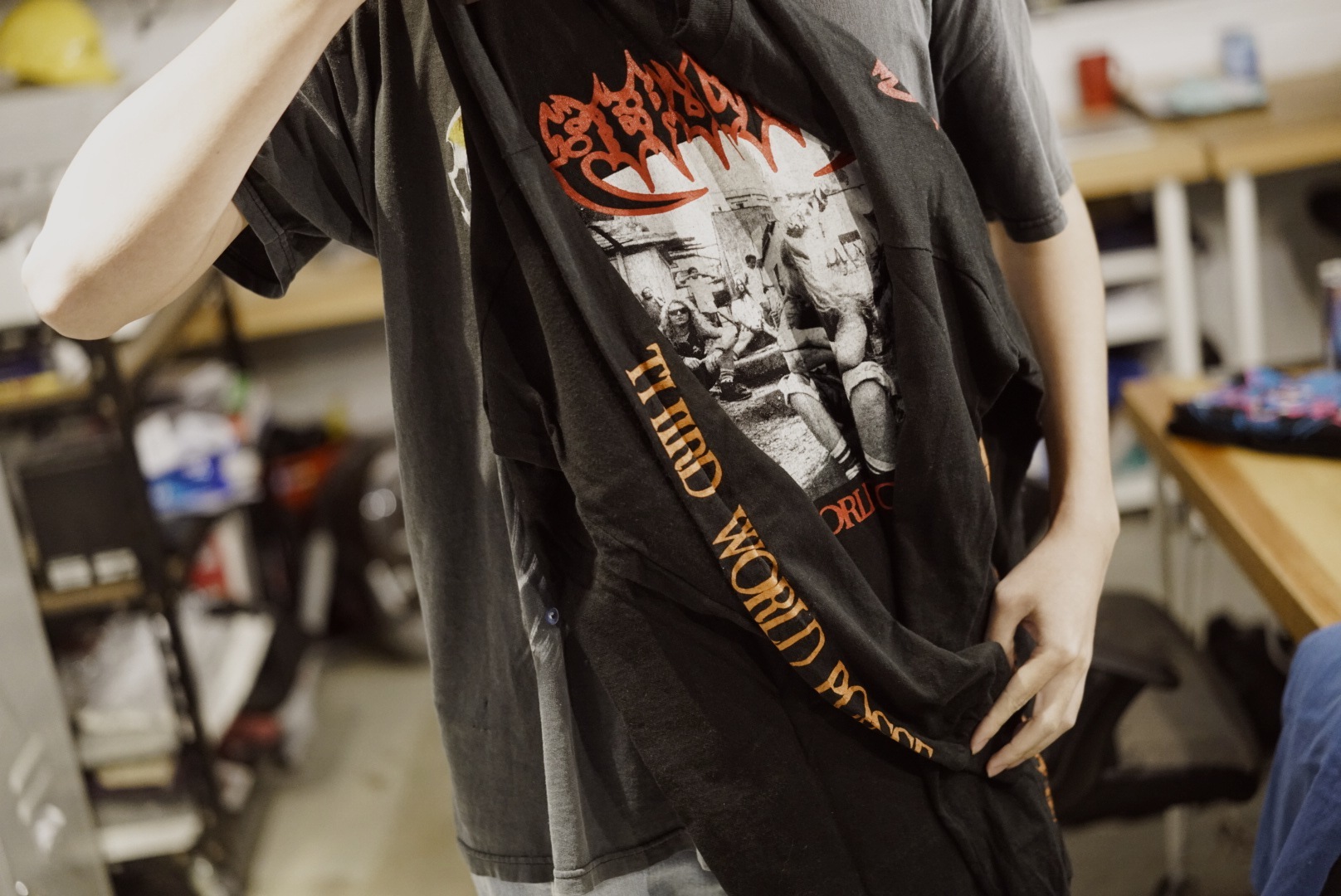 One of these resourceful databases that help merchants like Joshua is TShirtSlayer, where a community of devoted and discerning metalheads share information about almost all metal merch available. Think of it as a less user-friendly Discogs, and for metal t-shirts.

Over time, Josuhua been able to cultivate expertise that has allowed his own personal collection to grow — just like Never Gonna Turn Down Again or the handful of other merchants, he is an enthusiastic collector at heart.

Joshua recounts how, after much patient trawling on the web, he managed to procure a deadstock (an item still in shrinkwrap) piece of original Sepultura merch (pictured above), from an era just before the band became international metal icons. "I found someone else online who was looking to let go of part of his collection," he says. "It cost me quite a bit, but not as much as the other sellers." 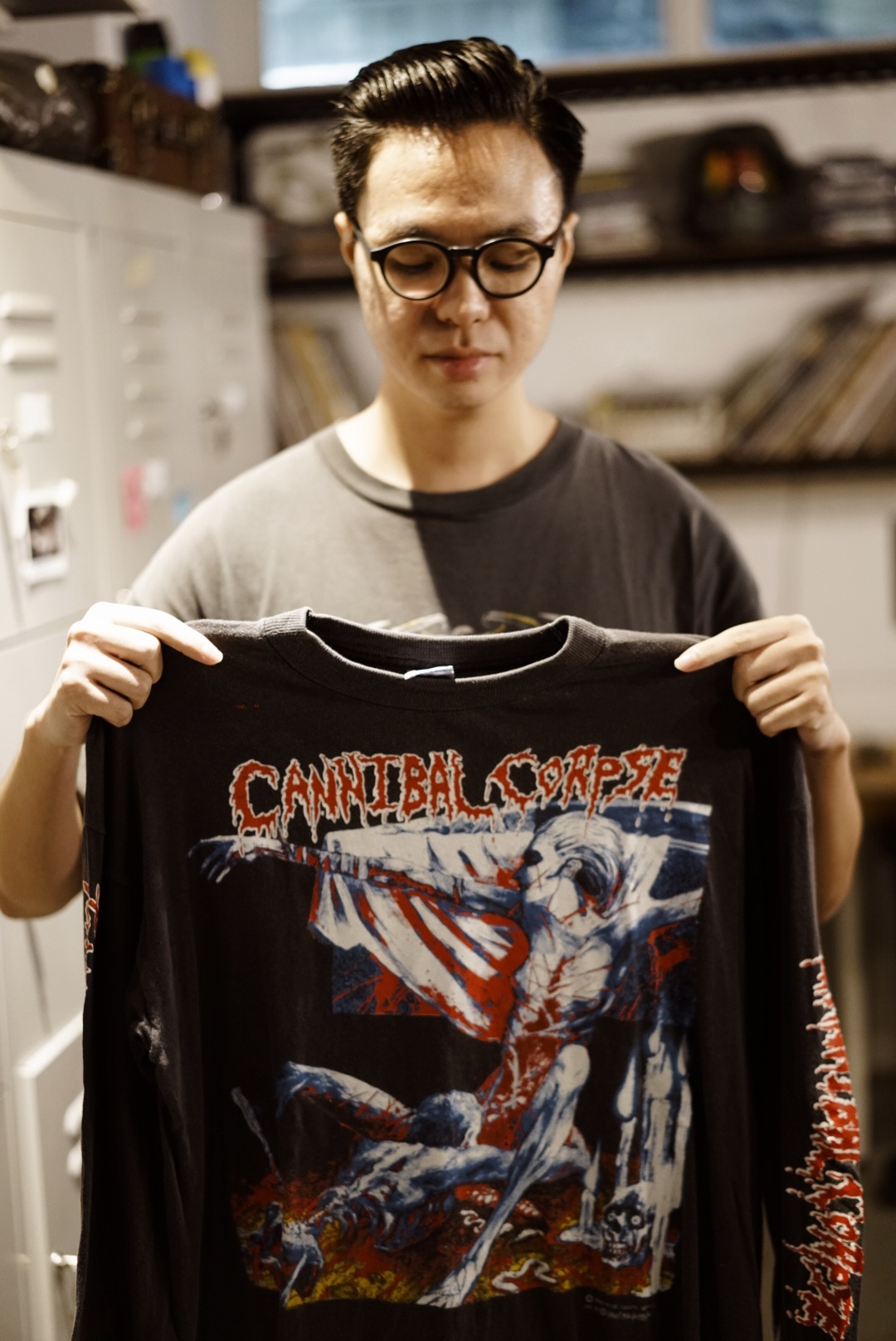 "I’m glad I gave metal a chance because it showed me a whole new world."

— Joshua aka causeofdeathvtg on what metal means to him.

But which vintage band merch has he yet to add to his collection? "Definitely Bolt Thrower. Even among fans, we know that if one piece were to pop up, the price would be super crazy. So that definitely takes the top spot." He also cites established bands like Metallica, Mayhem, Slayer, and Anthrax, whose apparel from their early periods are now among the highest-priced pieces available (and also highest in demand).

While causeofdeathvtg remains a low-key operation — Joshua handles all orders himself — he has found camaraderie with the founders of Death Threads, a local store established by Deon Phua (of art collective Tell Your Children) and Edmund Tan. Anchoring his brand in classic metal apparel, Joshua has also started looking into pop culture t-shirts, showing off a mint condition Aliens t-shirt from the early 90s during our conversation.

"I’ve been bringing a collection of vintage pop culture t-shirts that stray away from metal," he tells us. "I’m not only into metal. I’m also into movies and video games, so I try to bring those pieces in as well."

Lining up with the store's collection of pop culture clothing from the 80s and 90s — "Deon invited me to join the group to bring a new dimension to it" — Joshua's t-shirts have become accessible to local customers, but, as he tells us, it's his international following who snap up his items, swallowing hefty shipping costs along the way. 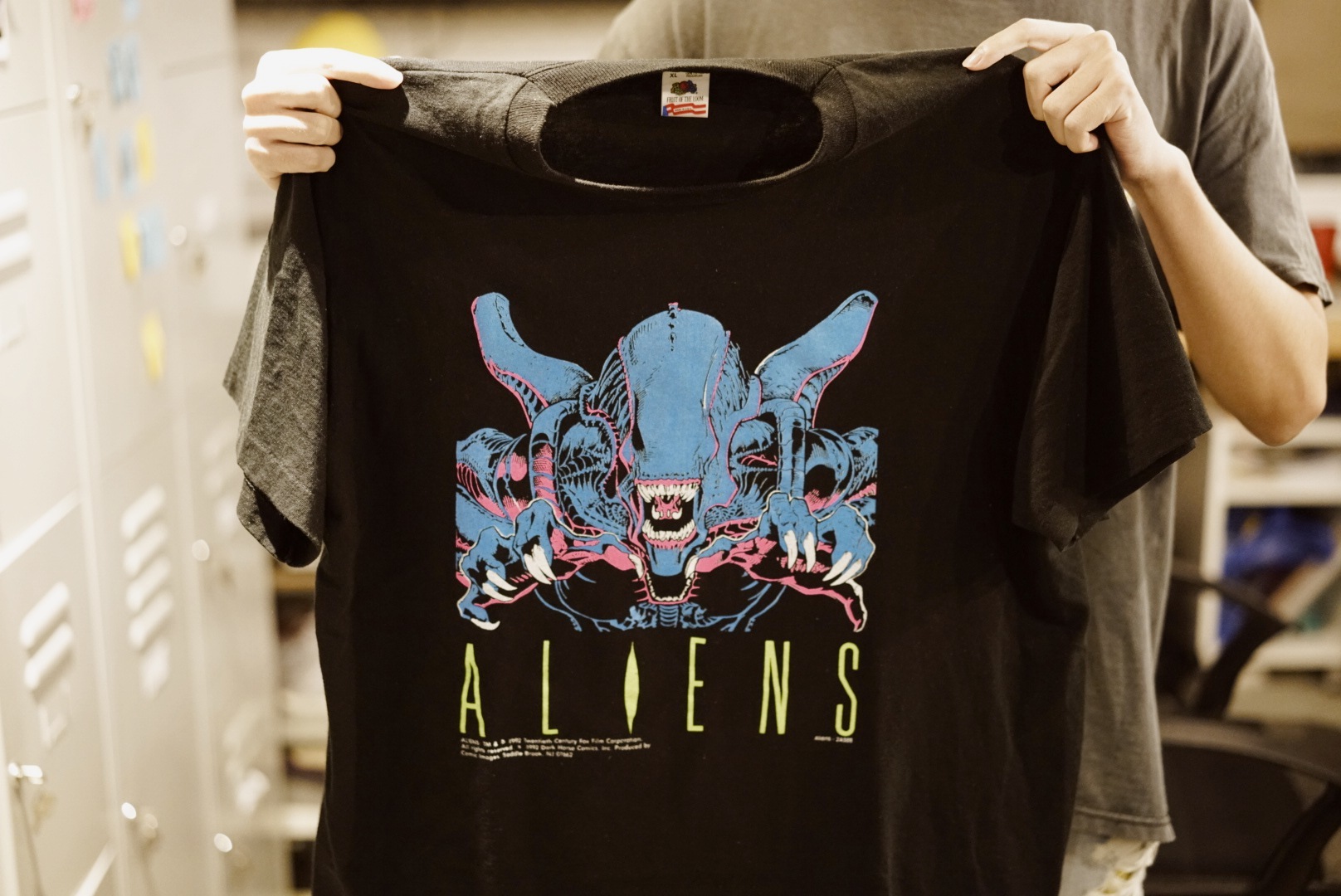 Despite his lucrative journey thus far, he still treats his venture as a means to fund his own collection, and if there's ever space for a proper business, it will not be in Singapore.

"It’s generally so much cheaper and easier to get things in America and Europe on the ground," he explains, "whereas, in Singapore, we have to get everything online." He even cites Malaysia as a country with a healthier repository for vintage merchandise.

For now, he hopes to cultivate a vintage t-shirt scene in Singapore with fellow collectors, and with every customer buying a metal t-shirt for the aesthetic appeal, he hopes they'll treat it as a gateway to a world of music he's come to embrace. "Most kids deal with angst growing up and I think it was a good way to deal with that," he says. "Apart from that, I love the sonic aspect to it. I’m glad I gave metal a chance because it showed me a whole new world."

And as for the skeptics? Joshua stands by one thing: "There’s always history behind the shirts that I sell."