I've been waiting to catch Coldplay live since I discovered Parachutes, their first album, during my college years. I feel like I've grown up alongside the evolution of their music, which has been with me through the happiest and darkest moments of my life. Coldplay's music also holds such a special significance for me and my husband.

Why Bangkok? We decided to watch Coldplay in Bangkok even though the Singapore venue is but 10 minutes away from our home. We felt this concert would be best watched here since we first met in Bangkok and consider this city as our second home in Asia—not to mention this gave us a chance to take a quick break from the daily grind, too!

The good thing about catching Coldplay in Bangkok is that we got to hear from those who saw them ahead in Singapore and Manila. According to my friends, it was best to line up as early as 2:00 pm. Since April is the height of summer in Bangkok, you can just imagine how crazy hot and humid it was waiting for the next several hours before gates opened past 5:00 pm. 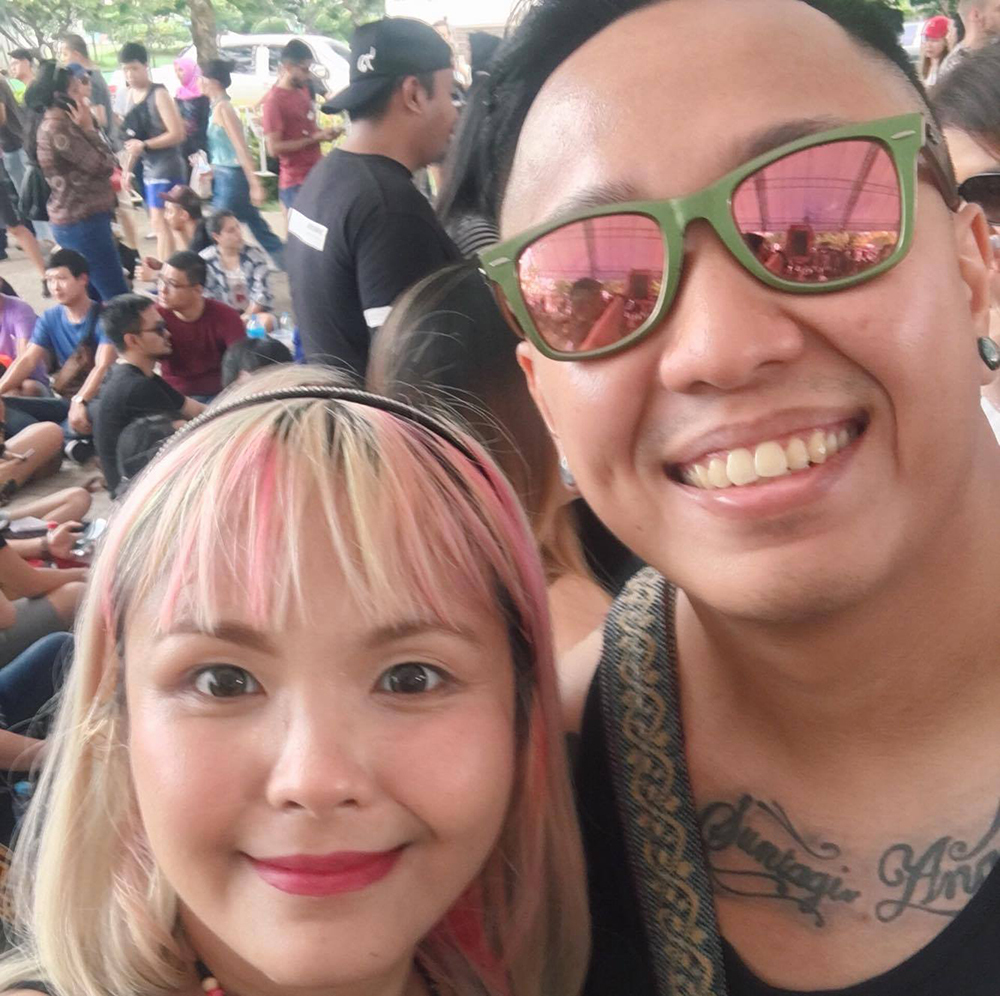 Me and my husband lining up hours ahead of the concert─but
apparently thousands had the same idea!

At which point did you cry? The Coldplay concert by far is the most intense, the most moving, and the most unforgettable concert I've ever been to. It was an overwhelmingly emotional experience, so I was crying for more than half the time!

My tears first fell when I saw them emerge onstage in their full, colorful glory. I can't believe I was actually there watching them live. Of course, feelings intensified when I heard the classics "Yellow" and "Fix You." I was also truly moved when they dedicated "Everglow" to the deceased King Bhumibol of Thailand. Another really emotional moment for me was when Chris took a break from singing and introduced the rest of the band, his best friends for 21 years and counting, after which he turned over the singing duties to them for "Don't Panic." By the end of the concert, I was one sweaty and teary-eyed, yet happy, mess. 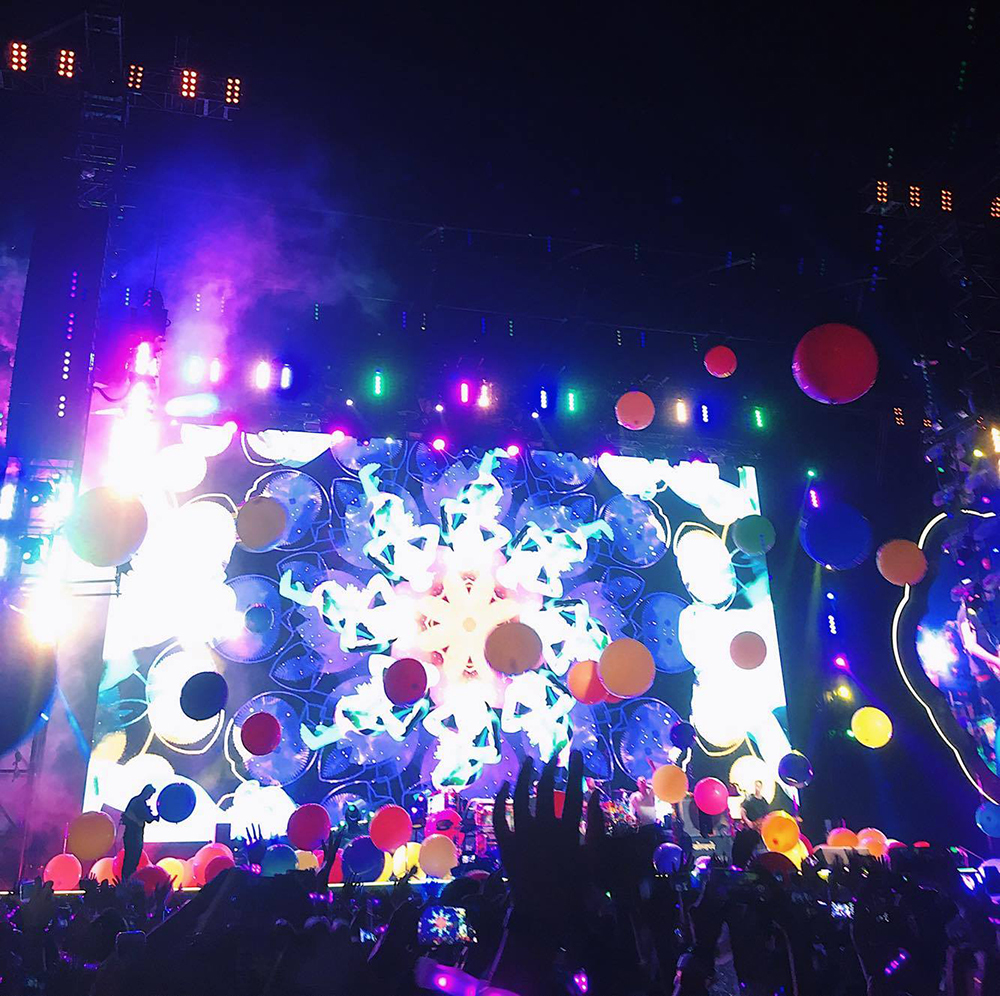 Has the show changed you in any way? I was there, standing amidst tens of thousands, and yet I felt each guitar riff, each stroke of the keyboard as if it were played for me. I was one with the rest of the fans in Bangkok's largest outdoor stadium, but at the same time immersed in an experience I can truly call my own.

The Coldplay concert has definitely set the bar high for me in terms of what to expect from a live performance. More than the music, it was an audio-visual spectacle that offered a moving narrative that reflected the band's beliefs, their stories, as well as their journey as one of the most highly-anticipated music acts in the world.

That night, I was reminded of what it means to be a fan and why music will always be one of my greatest loves. My heart is full with memories from this concert of a lifetime.

Why Bangkok? When we found out the ticket prices for the Manila concert, we found them too expensive and not worth it. We opted to watch the concert in Singapore; however, for some reason, we had problems with the online payment. Good thing Thailand was an added city, because it was the only concert day that wasn't in conflict with our schedules. 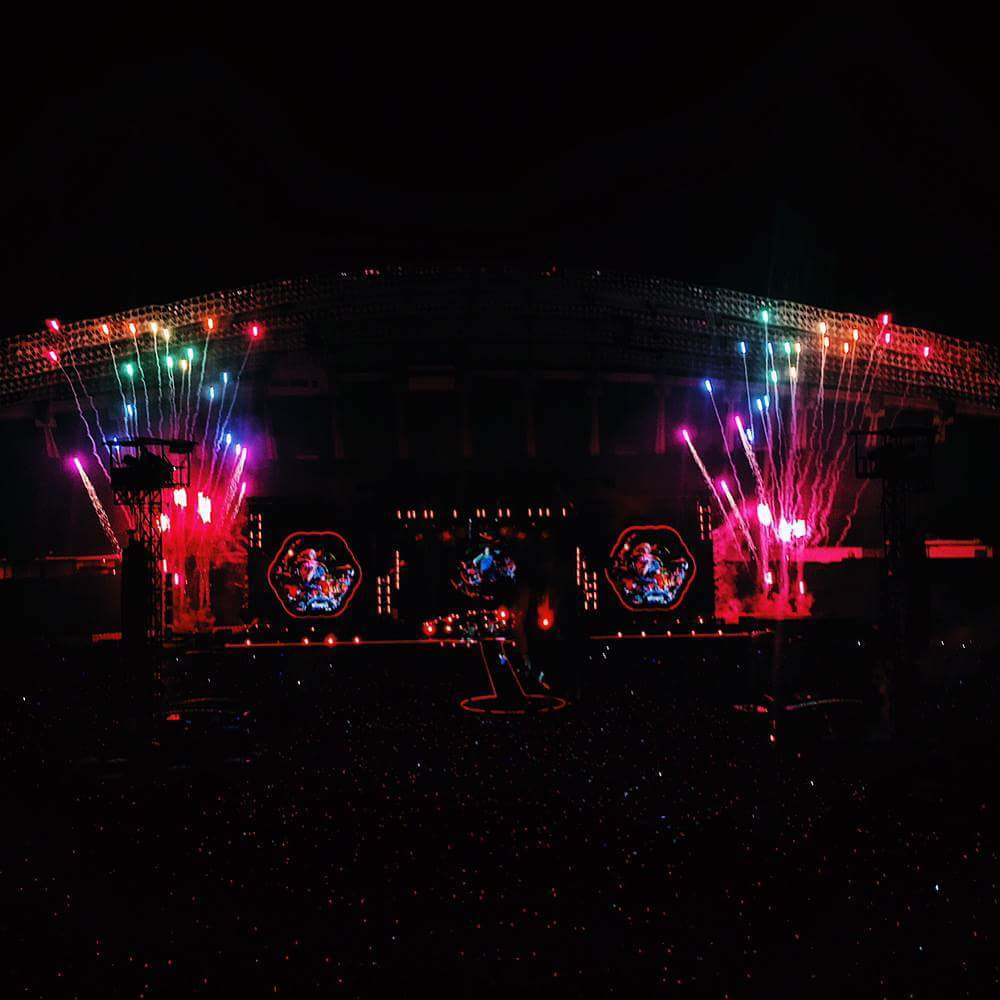 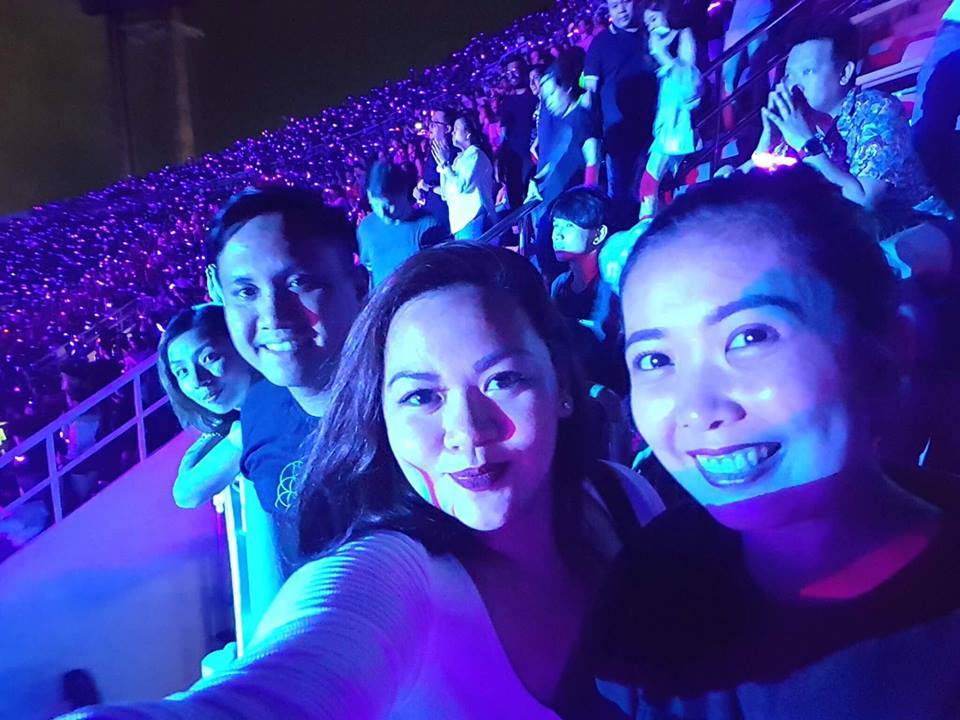 Coldplay sends positive, happy vibes to the world. Something that we all need especially with all negative things happening around us. 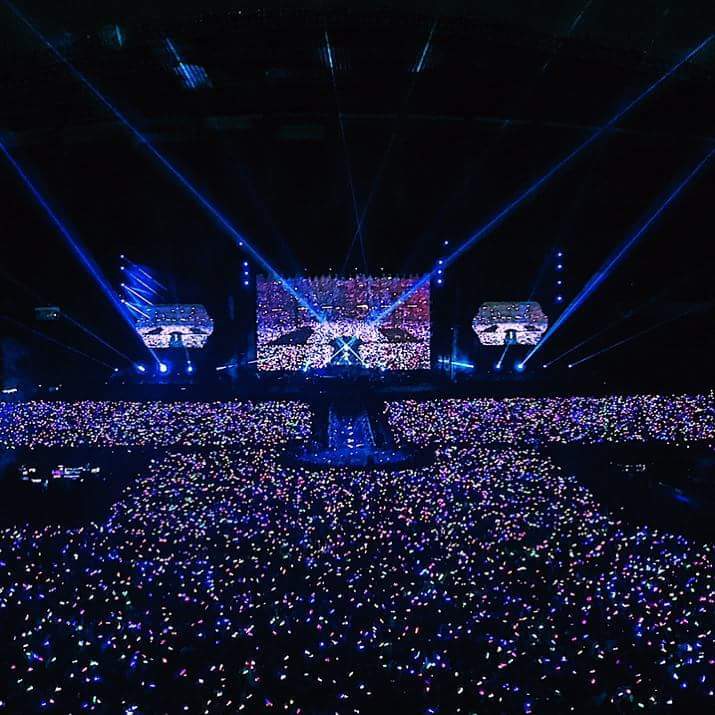 Has the show changed you in any way? It made me appreciate concerts even more. The lights and Xylobands made the concert-goers invested in the show. Every time our wristbands would light up, you'd definitely feel that you're part of something.

Why Taipei? After seeing the crazy demand for their AHFOD Tour, I knew the only way I could get tickets was by watching them abroad. Luckily, I had friends in Jeron Travel Agency which had a complete package for the concert in Taiwan (VIP tickets, accommodation, transportation, etc.). If there were any concert that's non-negotiable for me, it's Coldplay, and the minute I saw the package for Taiwan, I made sure to take it.

I thought I was going to go alone because there was a waiting list, but luckily, I was able to book not only for myself, but for four other friends. We all ended up in Taipei for the concert, together with 70 or so Filipino fans who booked through the same agency. 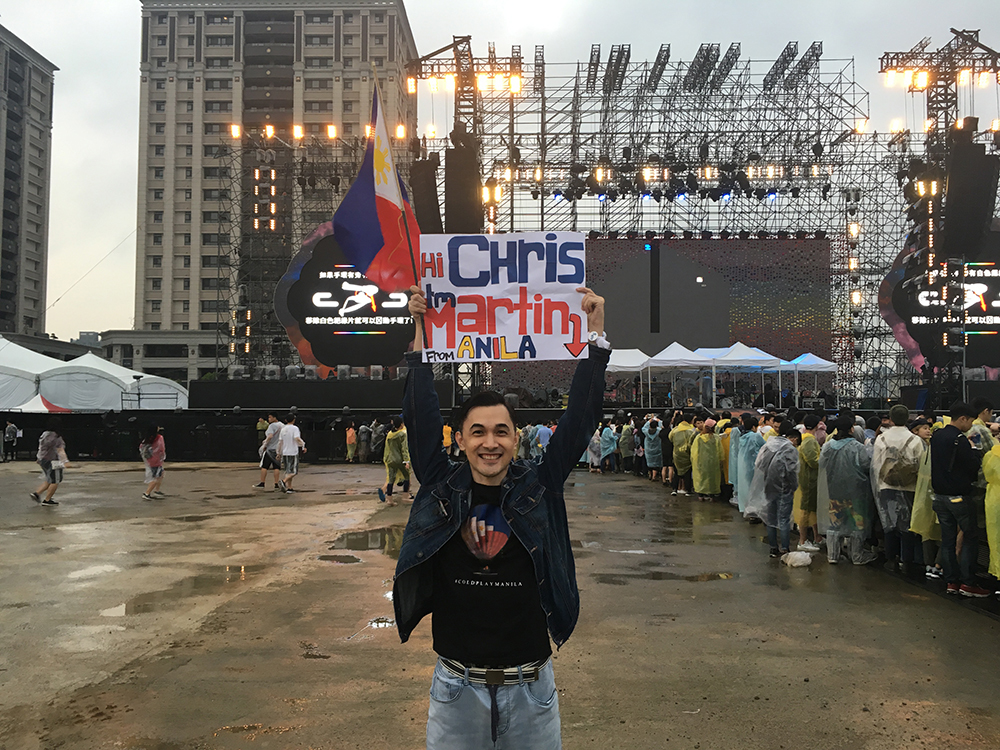 I brought a witty banner that played around my name and Chris's, alongside a Philippine flag which went rogue inside my raincoat (they didn't check) and repped a Coldplay Manila shirt I made. I also brought my xyloband from Manila, which functioned well in Taipei, while the one I got there, didn't! 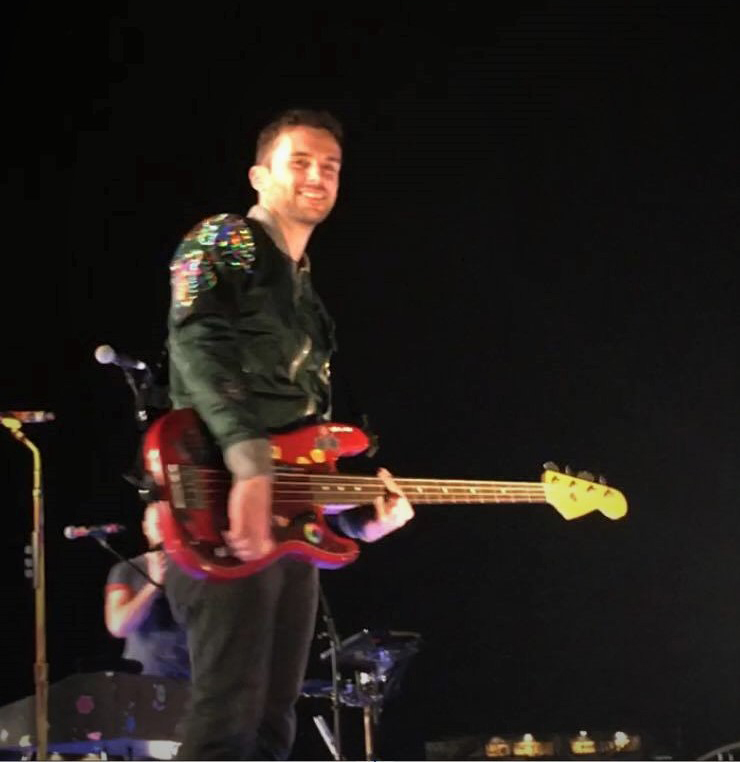 During the part where they were closest to us, I loudly said happy birthday to Guy Berryman since his birthday was the following day, and he gave us a smile! 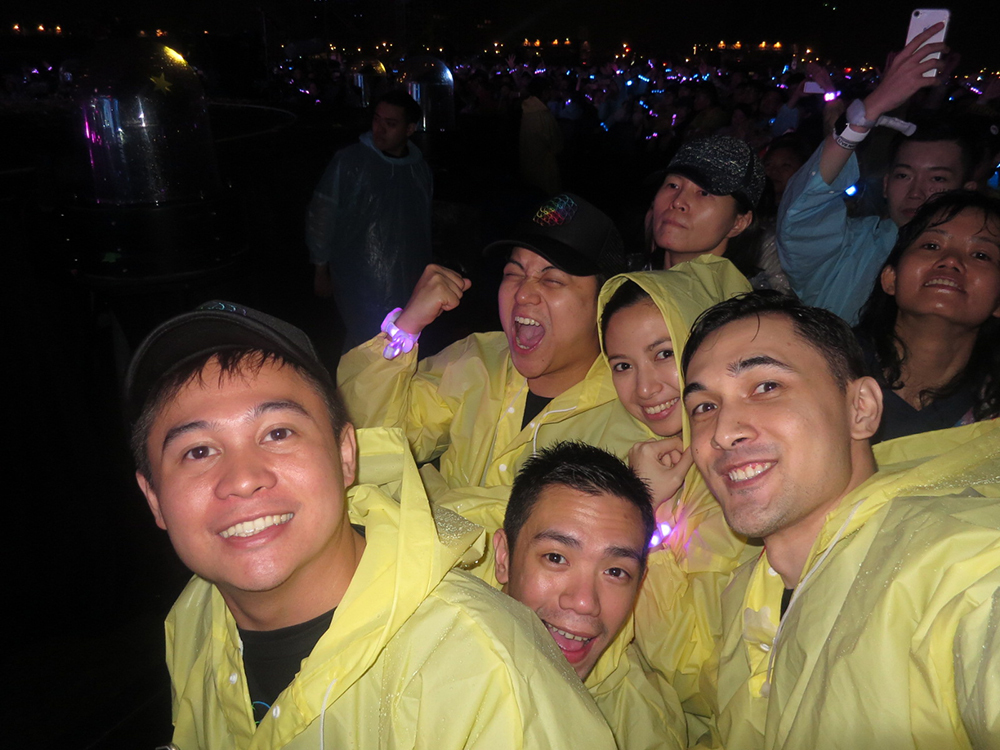 It was all yellow... raincoats in Taipei. It rained during the show;
we bought these at 7-11 beforehand!

You ended up watching in Manila, too. Any difference between the two shows?

There's no crowd like a Filipino crowd. I say this without bias. Maybe it's because 1) we know the English language very well (so it's easy to sing along), and 2) if there's anything you can't take away from a Filipino, it is the love for music. While the Taipei show had bits and pieces of the crowd on the up and up, the Manila crowd had more gusto and sang their hearts out—possibly the reason why Chris Martin talked about our crowd more in their special tribute song to Manila, as compared to talking about the rain and the train station beside the venue in Taipei.

I also think the write-ups of fellow Filipino fans just goes to show how much of a fandom we are. There was no Asian Tour that didn't have a Filipino in it. We had marriage proposals in Singapore, Manila, and Seoul. Filipino fans also had the honor to introduce the band in both the Singapore and Manila leg.

Both shows were truly overwhelming and they will definitely be a core life memories till I die. I took tons of pics and videos and I can't seem to let them go even if my phone is at full capacity. 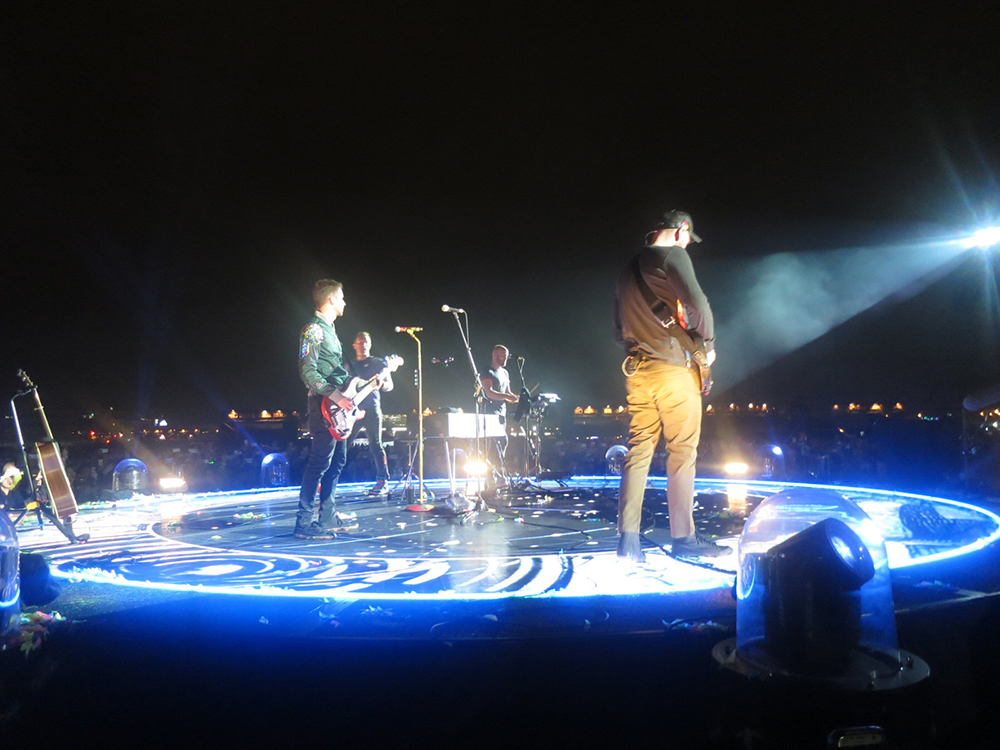 I gotta give it up to the band. It rained pretty hard during certain parts of the show that I thought it wasn't gonna push through, but they went on with everything as if it was just another day for them. I do hope that they continue to churn out music and I look forward to seeing them in the near future. I might actually see them a third time later this year in the US. I feel it's worth it another round because they truly are MAGIC.

Why watch again in Korea, after seeing them in Manila 11 days prior? It’s in my bucket list to watch a Coldplay concert in a stadium. I was kind of disappointed when they announced that the PH concert will held at an open space, but I also didn’t want to miss their first ever Manila concert, so why not watch twice? (Or as it turned out, thrice? Haha!) 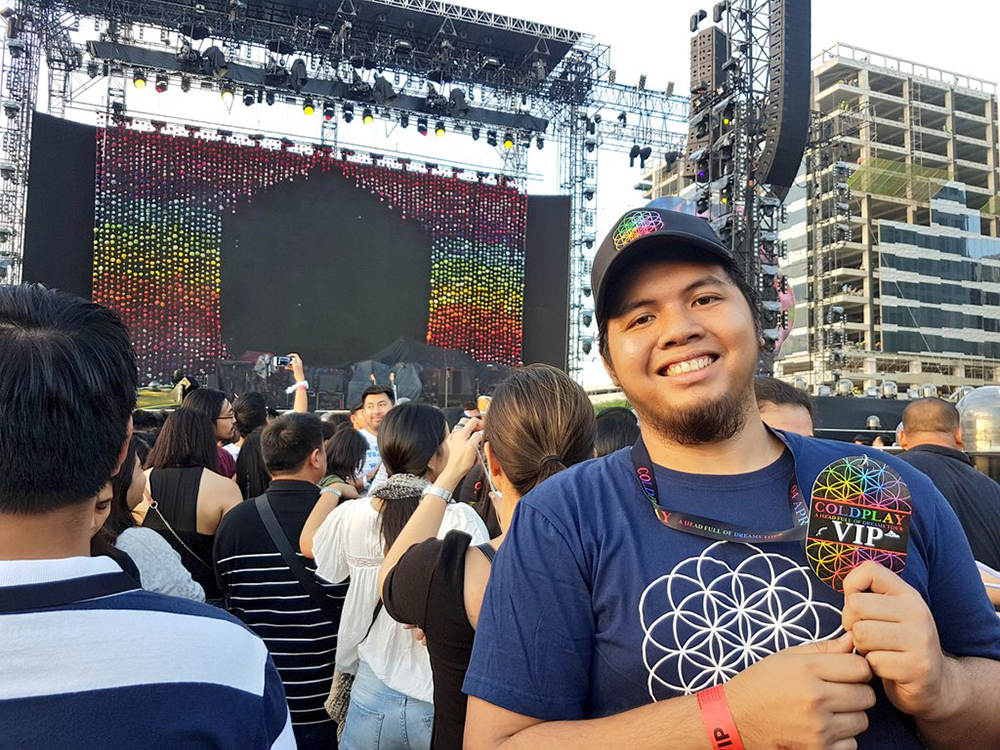 How did you get tickets? Pure luck! By the time I went online for tickets, the VIP section was already unavailable. I tried again after 5 minutes, and boom, there were three slots for me and my friends. I also failed to secure tickets during the selling period for Day 2, but one month after, I randomly checked their website, and saw free slots to some seats at the back of the stadium. That was my original plan anyway: to have a better view of the xylobands and the pyrotechnics used in the show. 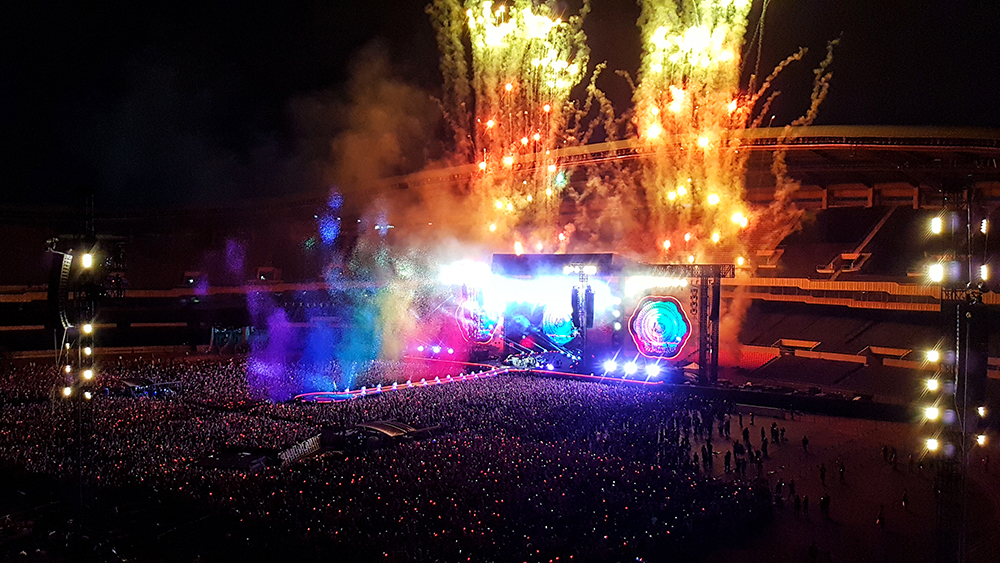 What time did you line up? Concerts in Korea are stress-free. For standing sections, people have to line up according to their ticket number, which is based on the day you booked your tickets. Turning up early doesn't get you in any sooner.

At which point did you cry? The climax of “Fix You” when Jonny starts his guitar solo, then Will comes in with his drums together with some fireworks, followed by Chris singing "Tears stream down your face..." Holy crap, that song will definitely make you cry if you hear it live. Happened to me for all shows! 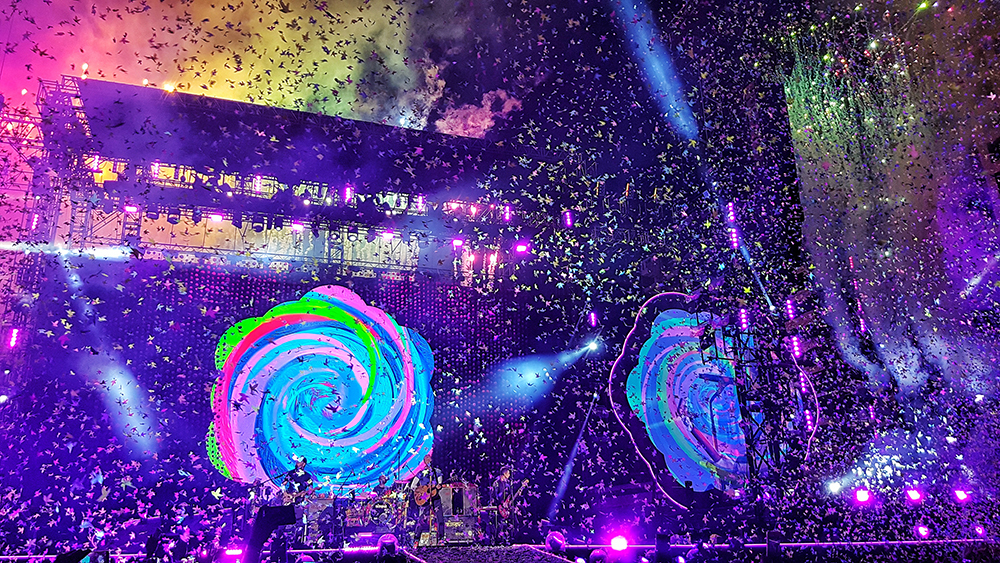 Unexpectedly, I also teared up during “Viva La Vida” on the second night. The entire crowd was singing on top of their lungs for the chant, even leveling the loud speakers at the venue. It was one of the most beautiful things I've witnessed.

Has the show changed you in any way? Yes, that I should work harder for future Coldplay concerts. Haha, kidding. It changed my definition of happiness.

I remember reading #ColdplayManila posts of some fans, content with Gen Ad tickets or being Team Labas just to hear the band live. And during the last Korea show, I was next to a girl who was unhappy with her defective xyloband, so I gave her mine. I immediately saw her face light up, and she kept thanking me for saving her night. I mean, it's just a simple light bracelet for me, but for her, it's the one thing that will complete her night.

I should learn to appreciate the little things in life because what I take for granted might mean the world to some people. 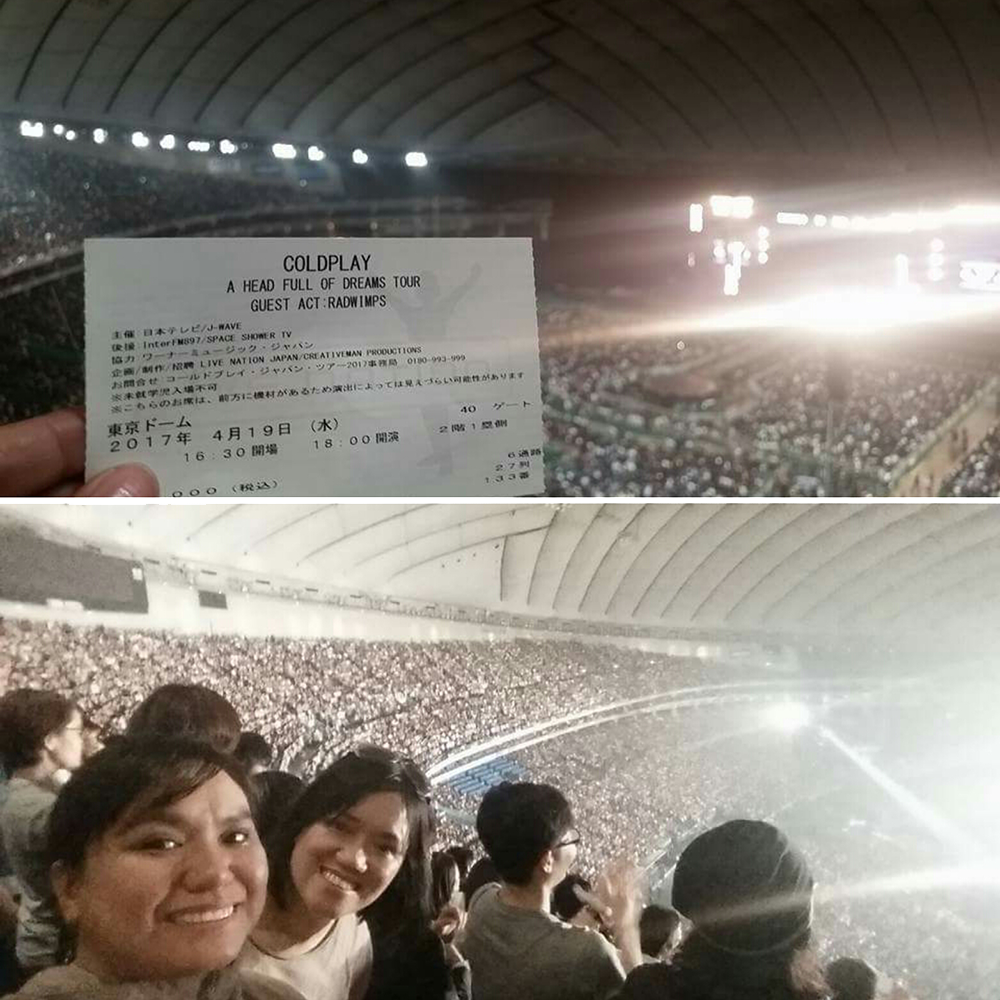 What time did you line up? We didn’t; we made a run for it. LOL. We had a 4pm Studio Ghibli tour, which was about an hour away from the Tokyo Dome. We left just before 6PM, and took the train straight to the Dome. When we got there at around 7PM, there was no more line outside, but there were people like us rushing to get in. In fact, there were still some people trying to secure super last-minute tickets at the booth! The concert didn’t start till 7:30PM so we caught the entire thing from the start, fortunately.

Since we got our tickets fairly last minute, we were seated along the second to the last row. Thanks to the Dome’s layout, though, we got an awesome view of the show. 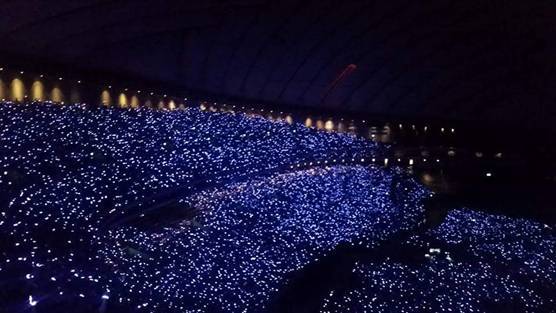 This picture sums up the experience for me: it was simply magical. There was nothing simple about the production, as they definitely pulled out all stops to give a great show. And even though they played more of their newer songs, when they did play their old ones, it was a great reminder of why I became a fan in the first place.

At which point did you cry? “The Scientist.” I didn’t ugly cry, but the tears did well up, and emotions did soar. The song had always been special to me, but it is true that you tend to have a deeper appreciation for the music (particularly the lyrics), if you’ve gone through something similar. The relatability of the song had become extraordinarily high in light of my past several years, which frankly had me wishing to go back to the start because nobody said it was easy, but also no one ever said it would be so darn hard.

Hearing them sing it live (with superior audio quality, by the way!) was poignant and a humbling reminder that you do get your ups and downs in life.

Coldplay's A Head Full of Dreams Asian Tour, as told by Filipino fans Part I includes stories from the Manila and Singapore legs of the AHFOD Tour.