In this day and age where lines are unscrupulously drawn by music journalists and fans, the most distinct divisions are the ones made between electronic music and rock music. People reminisce about the days when 'rock' music ruled the charts and now music is a digital, auto-tuned nightmare with no originality and creativity. People deride the apparent lack of skill it takes to produce music on a computer and that music made from traditional rock instruments is 'real' music. Music evolves and recycles. Sometimes evolution can happen by looking back. Guitar music isn't dead and the people who harp on that untruth may very well be the same ones who make it stagnant. Of course, inevitable questions prop up due to our unwavering curiosity: what's next for rock music in terms of innovation? Darkside may not have the answer but they're pointing towards something truly remarkable.

The group was formed as one of electronic maestro Nicolas Jaar's many side projects. Teaming up with guitarist and tour member Dave Harrington, Darkside offers electronic music that subtly hints their many diverse influences but are on their way onto becoming a formidable, forward-thinking force. With their feet planted on Earth and their eyes transfixed towards the cosmos, they've been impressing critics and wowing audiences worldwide on the back of a self-titled EP and an excellent debut LP, Psychic. So it was with much surprise that they decided to drop by for a live set (hurray for no DJ sets!).

Although at first The Ground Theatre @ Scape seemed like a bizarre choice for a venue, seeing how it has played host to primarily metal and rock acts (and with Zouk not very far away), the place proved to be more than capable of generating an atmosphere befitting of an act like them. With the venue almost pitch-black, it gave off less of a club vibe and more of an abandoned warehouse one (albeit with excellent air-con circulation). Opening act Das Moth warmed the audience up with some choice nu-disco and house tunes for a fair bit. However, the audience were definitely not prepared for what was to come. 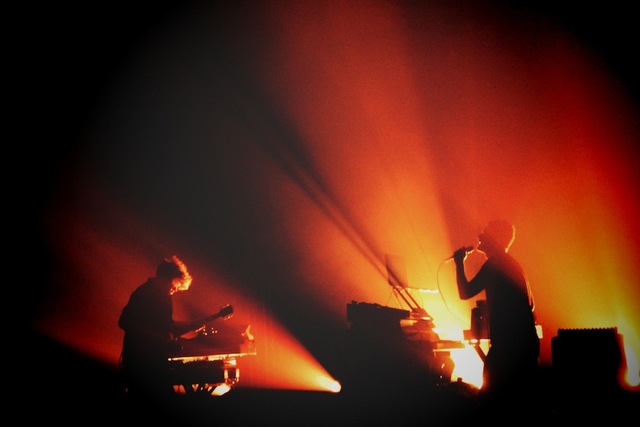 Before the headliners themselves took the stage, the sound system played 'Pharoah’s Dance' by Miles Davis, the brooding opening track to the mind-boggling jazz fusion record Bitches Brew. Whether it was an intentional choice by the band or just music randomly selected by the organizers, it felt like it was a slight nod towards what Darkside were about to unleash onstage. Armed with a boatload of synths and an electric guitar, Darkside launched into an improvisational track (or at least it appeared to be) that leaned towards musique concrete rather than danceable electronic music. Not until about 15 mins did they start to slowly summon the first recognizable track of the night, ‘Freak Go Home’.

While the songs on their LP already sound incredibly spacious and detailed, it wasn’t until experiencing them live that these songs were given even bigger room to breathe. ‘The Only Shrine I’ve Seen’ had psychedelic beats that were thoroughly infectious live and ‘Paper Trails’ transmogrified into a bluesy rave (if that even makes sense). Whoever said electronic artists have no live skills clearly have not seen Nicolas Jaar perform. The extended compositions were filled with imaginative synths and effects that only further highlighted Jaar’s ability as a top-tier performer in the electronic music scene right now. Dave Harrington did not fall short either. Not since Nile Rodgers has a guitarist felt so right commanding a dancefloor. It was a sight to see Harrington work his ass on stage with riffs that were as fiery as they were textured, a nice contrast to Jaar’s cool, collected demeanour.

The set may have only lasted about six songs, ending with the classic 'A1', but the way Darkside weaved all these tracks together made the gig less like a regular performance and more of an astral, out-of-body journey. They're without a doubt one of the most talented and engaging live acts out there now and it's only just the beginning. Never has the future looked so bright for the dark side.