Born and bred in Singapore but currently based in Warsaw, Poland, Dharni is legitimately one of the planet's best beatboxers at the moment.

Recognized as a prodigy from the very beginning, the self-taught artist began by cutting his teeth within our tiny hip-hop scene during his teens.

Developing his craft at local shows and through burgeoning online communities (this was before YouTube and social media existed), Dharni swiftly climbed up through the ranks, earning respect from his Singaporean peers, and eventually, from all corners of the globe.

By 2011, he was already named as the Emperor of the The Mic in Canada. By 2014, he became the first person in history to ever win the prestigious Grand Beatbox Battle Championship twice in row.

Dharni's first ever beatbox track, made up of 100% vocals.

And by now, Dharni has come to be known by many in the beatboxing realm as a legendary veteran, looked-up to and admired by his younger contemporaries.

From serving as judge for the Beatbox Battle World Championships in 2015 to performing alongside the likes of Kanye West and Mariah Carey on huge stages, Dharni is undoubtedly one of Singapore's highest-profile musical exports over the last decade.

Ahead of his homecoming set at Chang Beer's invite-only urban art exchange event, Chang Urban Pulse, set for Friday, 24th February at Infinite Studios, Dharni talks to us about evolution, success and his desire to pay it back to the beatboxing community.

Hey Dharni! When and how did you first become attracted to the art of beatboxing?

When I was 14, I saw on Michael Winslow on television making noises with his mouth. I decided to do the same, but also imitate sounds and beats which I heard on the radio and on the Internet - where I discovered another guy, Rahzel, who could beatbox and sing at the same time. It was really mindblowing for me. I came to realize that this artform was called beatboxing, and I got sucked in like a blackhole.

Once you became passionate about it, how did you go about developing your skills?

Before YouTube and Facebook times, I was in a forum called Human Beatbox, and over there, there were many people like me and we shared our audio recordings to exchange ideas and listen to feedback. The community was and is still growing till this time. And now there social media platforms like YouTube and Facebook really speeds things up in terms of development for beatboxing.

Do you remember your first ever live show?

My first live show was in secondary school during Talentime. It was a euphoric experience, everyone stood up and cheered at me. Those who didn't know me before started to scream and dance. I felt my talent was being acknowledged by the whole school which empowered me to do even more.

Growing up in Singapore, what was the hip-hop and beatbox scene like in those days?

The hip-hop and beatbox scene was very small and everybody knew each other. In the beatboxing community, we would gather in town weekly to hang out and jam with each other. It was really simple back then and not many people knew what the word "beatboxing" even was. 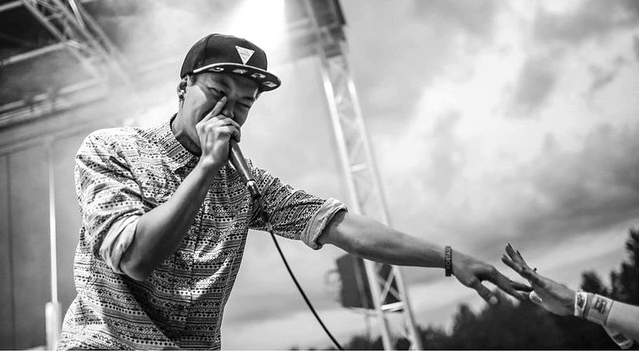 "My proudest achievements are yet to come. Beatboxing is not only about winning, but paying it forward to evolve the community."

Over the years, you’ve grown to be known not just as one of Singapore’s best - but as one of the best in world. What have been your proudest accomplishments as beatboxer?

My proudest achievements are yet to come. Beatboxing is not only about winning, but paying it forward to evolve the community. This year I'm organising the world's first international beatboxing educational event, World Beatbox Camp running from 6 to 16 August, in Krakow, Poland. Lasting over 10 days, beatboxers from all over the world will come to learn from the best beatboxers in the world.

There will be battles, and after parties. Basically it's to evolve the community and build new bonds with one another, and to show that beatboxing will be more prestigious in the years to come.

You’re currently based in Poland as well. How’s your career progressing in Warsaw at the moment?

Everything is going very well. My videos on social media went viral and it helped me a lot to reach out to the Polish community and it's been well received. I'm currently also doing a few campaign projects for major brands.

Speaking of that, you were involved in Boiler Room recently! Could you tell us more about that project?

It's a campaign project to promote the alcohol brand Ballantine's and their whiskey. Boiler Room is collaborating with Ballantine's this period promoting their motto 'True Music'. I am involved to promote this campaign on social media as an influencer. This is a worldwide campaign and recently was in Moscow. The next stop will be in Madrid.

To successfully organise my event, World Beatbox Camp. And also to finally work on an album with my singing partner K-Leah. I'm also working closely creatively with a mobile app called Kwaver, which musicians can share and jam their tunes with each other. And of course to level up my beatboxing skills when I have time and keep having fresh content in my videos.

Who are your favourite beatboxers out there right now?

Right now, I can easily give a few, like Tom Thum, Berywam, Reeps One, Gene Shinozaki, Alem, and many more.

Lastly, you’re often tapped as an instructor for camps and workshops worldwide. If you could offer a piece of advice to any young, aspiring beatboxer out there - what would that be?

Keep that hunger going. If you want to be a beatboxer, as long as you have that passion, don't stop and always evolve. Welcome to the beatbox family, let's level up together.