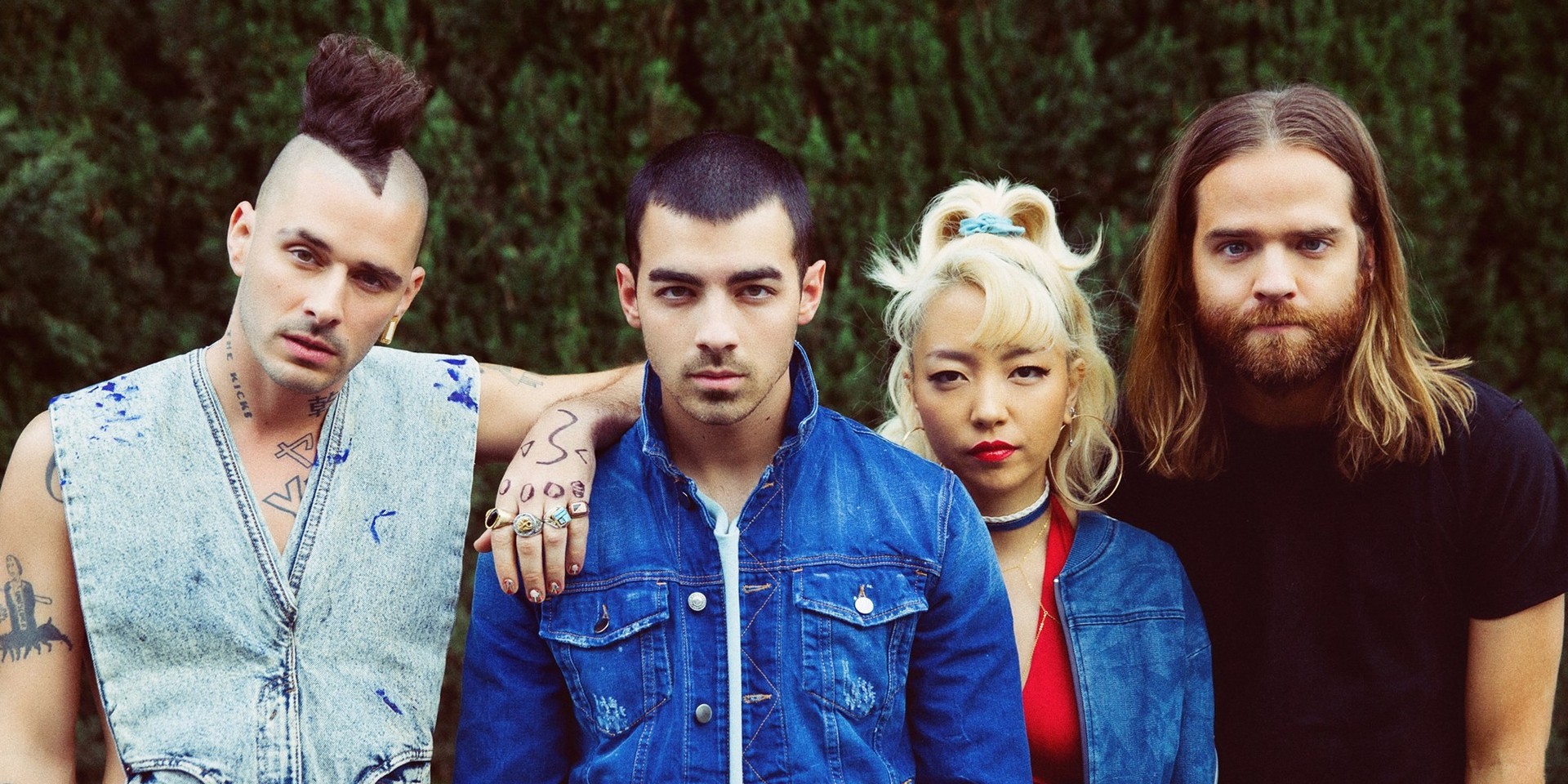 Last week, we were told that we will be interviewing Joe Jonas from DNCE and asked all the DNCE (or maybe just Joe Jonas) devotees to throw us the best questions you’d like to ask him.

Much to our disappointment, Joe Jonas was unavailable for the call, but we still had a blast talking to bassist/keyboardist Cole Whittle instead, and we directed some of the burning DNCE questions over to the Berklee graduate.

Here’s what he said:

How would you describe DNCE as a team?

I would describe our music as disco and funk hits played by a 90s rock band. You know, I think we are funky and clean — we are pop music but we are also kinda messy rock n roll. I think that’s what people respond to — the rawness — but the catchy and funkiness of it. You can dance to it too.

Describe all the other members, but only using food flavours.

Erm, I would describe erm (guitarist) Jin Joo as a peach, because she’s so sweet.

I would describe Joe as an apple because he’s kinda crunchy and sour. I just mean, he’s kinda like a serious leader so you take a bite in the hand and you hear that sound, you hear that crunch and it gives you the core — it’s like a strong core.

I describe (drummer) Jack as a cantaloupe because he’s smooth. I think I would be a banana because you can peel me and there’s a lot of layers.

What has been the best experience with the rest of the members of DNCE?

The best experience and the best memory I would say is when we won the MTV Video Music Award for Best New Artist. We all grew up watching that show and saw some of our famous favourite bands from Nirvana and Eminem. Winning that award put us in the class of our heroes. I would say, of all the amazing memories we had, that’s one of our biggest ones.

We didn’t feel nervous, we just feel honoured to be even considered for an award — like any award show, we’re just honoured to be acknowledged, you know. We love music more than anything, whether we are playing it in an arena or a club, we are just glad to be playing it.

Bring us through what it’s like in the studio with DNCE. What is the usual song writing process?

Name a song of DNCE with the most memorable story behind it.

You know what, let me think.

I have to say it’s 'Cake By the Ocean', because it’s such a cool, accidental moment in life where you were just joking around with your friends and it becomes a super hit around the world.

For 'Cake by the Ocean', we were in the studio with one of the sweetest producers and it was one of the moments in between creation when you were just hanging out — they were talking about a drink, Sex on the Beach, but they kept calling it a "cake by the ocean", which is just kind of a mispronunciation of the drink. And Joe has had a crazy sense when something funny is happening, he immediately picks up on it. He grabbed that error in speech and made it into the song as it is.

We felt grateful when it got attention. We were surprised but we believed in all of our songs. If you believe in something, you can’t be that surprised when other people like it. We were so happy and overjoyed that we got to go and play for the whole world — and now come to Asia and play — because of one silly song that got on the radio everywhere.

But we do not take it for granted, we cannot wait to come and play and put on a great show for everyone in Asia. We just hope they would want us back over and over again.

What is your ultimate dream collaboration?

I would say everyone from the Rolling Stones to Outcast to Kendrick Lemar to the Teenage Mutant Ninja Turtles (laughs). We're kind of cartoon characters too, so I feel like we can make a cool movie together — maybe like a movie, maybe like a Broadway show. Teenage Mutant Ninja Turtles with a DNCE funk film score. I feel like they will do great ninja choreography to our songs (laughs).

You know what, I just thought of it while talking to you, so I hope it does (come true). If you know any ninja turtles, please call them up for me. (laughs)

If you had the opportunity to relive any moment of your life, which moment would it be and why?

You know what, I have a feeling I can’t answer this question because it will be the moment we walk out on stage in Singapore and hear the fans screaming at us.

A fan once broke into our tour bus. We were sitting on the couch and I came in — she stood up and she handed me a stack of studio-quality photograph of her pet skunk. You know what a skunk is? Yep, her pet skunk in a custom skunk go-cart and she looked me in the eyes and she walked out — she basically ruined my life because I got no idea what it meant and I can’t figure out.

Give us a hilarious story while the band was on tour.

You know one night Joe and I got left in Toronto, Canada. The tour bus left us. We were partying too hard and, and we were five minutes late to show up at the tour bus from the hotel.

The tour bus had left us because the driver had thought we were sleeping in our bed. So we were standing outside in the snow for an hour, looking at the stars and they almost went to America without us. We waited out there for an hour for the tour bus to come back, to turn around and come pick us up. We got on and made it to the show the next day. So it’s uh, a happy ending. (laughs)

What can your audiences for Singapore’s show expect this coming concert?

What’s one thing you look forward to for your visit to Singapore?

You know what? The show. I can’t wait to experience the city and meet fans and make new friends and party. But, everywhere we go, our favourite thing is to look at the audience from the stage and see their eyes and see their hearts — to really, really feel their energy. That’s the moment where we get in tune with Singapore.

DNCE will be performing in Singapore on August 15th at Suntec Convention Centre, Hall 403. Tickets are available here.