The Stand For Something campaign has been something Dr. Martens has been deeply involved in since it was first revealed to the world. A world-class purveyor of footwear and clothing, they've also been highly engaged in the ever-shifting culture of modern live music.

Ever since introducing the Stand For Something Tour in the UK back in 2013, they've introduced an exciting way of connecting fans with some of the world's top indie acts.

Counting bands like Blonde Redhead, Twin Shadow, Dutch Uncles and Palma Violets as part of the long-running campaign, they've been committed to engage audiences around the world through live performances in an intimate setting.

Since the tour's inception two years back, they've always taken note of Singapore's burgeoning live music culture and introduced British alt-rock band The Heartbreaks to our shores in 2013, along with American garage rock duo Deap Valley in 2014.

This year, they've continued their winning streak with one of the UK's hottest breakout rock act of the past year.

Arriving in Singapore later in October would be four-piece Circa Waves, a band making waves (sorry) in the UK and beyond with their reinvigorating take on indie rock, one that eschews jangly melodies for heartfelt anthems that are almost revivalist, but the band's youthful zest retain them in a modern culture of buzzing social media.

“We stand for making genuine music. No gimmicks, No backing tracks, we are straight to the point. We play every show like it’s our last, put blood and sweat into gigs and push ourselves till we have nothing left to give.”

Having been featured on the NME Awards Tour 2014 alongside Royal Blood, Interpol and Temples, along with a tour supporting indie rock legends The Libertines and an appearance at Glastonbury 2015, Circa Waves are aiming big since their debut album Young Chasers and are now headed on their global quest for rock domination.

The band will be in Singapore on October 23 at arts space 72-13, as part of a South East Asia tour that will reach Jakarta at Foundry No.8 and 12 Monkeys in Manila.

Tickets to the show will be complimentary. More details on a ticket release date will be announced soon. Best part? Looks like Circa Waves will be receiving some support by Singaporean acts. Watch this space. 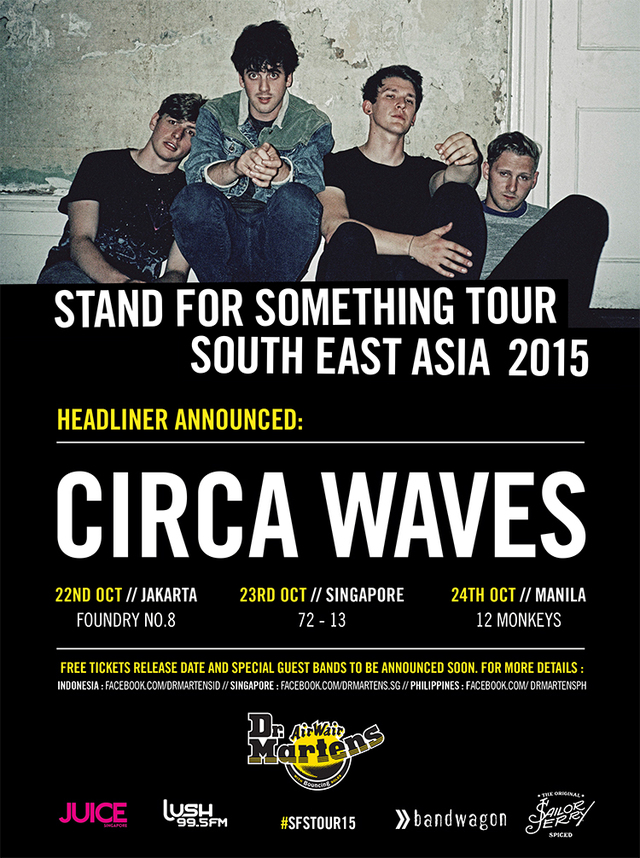 UPDATE: As previously reported, the opening act for Circa Waves' show in Singapore has been confirmed as Riot !n Magenta. Tickets are currently available at Dr. Martens stores from 16th September 2015 at Wheelock Place (#02-17A, 501 Orchard Road) and Capitol Piazza (#B1-31, 13 – 17 Stamford Road).

No purchase is necessary, limited to two tickets per person. The show will only permit patrons 18 and above only.

Here's a short chat we had with the band about their upcoming tour:

You guys have been riding on a wave of acclaim and hype for the past few months. How does it feel?

It's awesome to be recognised for the work we've put in touring. The best feeling is seeing thousands of people turn up to your shows and go nuts to songs you wrote in your bedroom.

From hustling through jobs to writing albums on a major label and travelling the world, has the shift been overwhelming?

Yes. At first certainly, but you would be surprised how quickly you settle in to it. It's within our nature to never be content with our lot, so we are always wanting to write better songs and play bigger and better shows.

Could you tell us a bit about the songwriting process behind ‘Young Chasers’?

I wrote all of the songs so quickly. The outlines of every track would come together in about ten minutes. Then I'd finish lyrics when I had time. I wanted it to feel connected to a moment in my life. That adolescence period is something I wanted to capture and write about.

What are you looking forward to the most on the 'Stand For Something' South East Asia tour?

Seeing that part of the world. It's so far removed from the UK I can't wait to see it. Also playing to people who know our songs who live that far away is always still an insane experience.

As a young band, what would you want Circa Waves to stand for?

We stand for playing every show like its our last and writing genuine music.

What can we expect from a Circa Waves show?

You can expect the best show you'll see a year. All four of us push ourselves to the limit. No one stays still and tries to keep their hair looking pretty, we rock out and get f*cking sweaty.