On paper, the Fresh Filter Vol. 1 launch show at venue saGuijo would most likely send a more cautious business planner into fits of rage. One might argue that the whole set-up ran counter to The New Normal of the commercial music industry. On a humid, wet payday Friday, co-organizers Jam 88.3 and Satchmi put on a show at the longest-running independent music venue in Makati, and didn’t charge any entrance fee. (For context, most gigs hover around the PhP200 range, including a standard drink.)

Instead, the free gig was like a de facto come-on for listeners to buy the Fresh Filter Vol. 1 vinyl compilation, which brings together a curated slate of independent local acts, including all the ones booked at saGuijo that night. 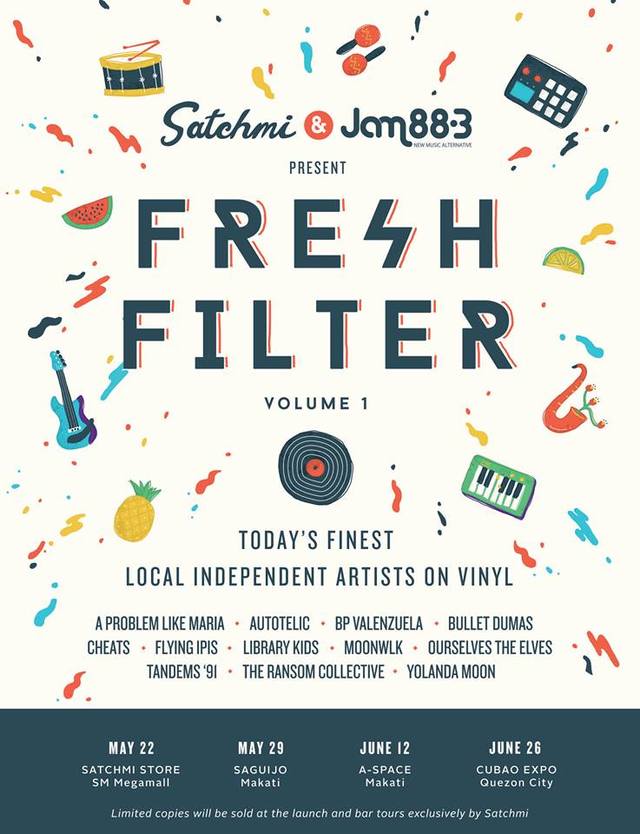 It almost feels like a deliberate "f**k you" to the conventional wisdom of how to sell music in 2015. Instead of sharing digital tunes in the cloud, like most promotional campaigns for new albums, The Fresh Filter crew lined up stacks of vinyl in the hope that they’ll fork over cash for a physical record. Between sets, Fresh Filter host (and Jam 88.3 DJ) Russ Davis repeated the spiel that buying the record would give direct support to the bands involved.

It’s a bold approach, no doubt – for one thing, there isn’t much reliable consumer data about how many Pinoy music fans even own a turntable. It opens up a related marketing opportunity for Fresh Filter’s partners at Satchmi, which also produce the Motorino, a portable record player that’s branded as a starter model for vinyl newbies. Sure enough, they even raffled off a Motorino during the show at SaGuijo.

In effect, the organizers established that the goods – the vinyl compilation and the record player – were the real focal point of this live event. So where does that leave the actual performers?

For what it’s worth, each act delivered a set worthy of the live experience – not just a sonic advertisement for their contributions on Fresh Filter Vol. 1.

Tandems ’91 opened the show, burdened with the difficult task of pumping up a crowd right out of their weekly grind. The group comes across like a gimmick band at first, with their affected preppy outfits and the air of eager fresh grads – as if Vampire Weekend had been formed at the Ateneo. But forget about their looks – there’s a genuine heart to their laptop soul. Channeling retro New Wave pop elements, the sound they coaxed out of their pads and controllers would not be out of place at a prom scene in a John Hughes movie. By the time they worked in familiar samples from 'Careless Whisper' and The Eraserheads’ 'Pare Ko', they had won over the jam-packed venue.

In fact, their whole cyborg pop vibe pretty much set the tone for the evening, with electronics being a normalized part of the sound. Of all the acts on the lineup, it’s Autotelic whose songwriting hews most closely to the kind of straightforward, radio-friendly verse/chorus/verse structure that rockist critics hold so dear, and yet their sound is delicately textured by Eric Tubon’s synth lines.

(from left) Tandems '91 proving the New Wave is barely old while Autotelic ignites the punchy pop-rock spirit of the night.

Up next were Flying Ipis, whose angular dance punk set the apart as the only group without any type of keyboard. It was almost like the inverse of what the other bands were doing – creating frenetic disco beats and danceable hooks with a traditional guitar, bass, and drum setup. The highlight was a newer song 'Half Brain' with a memorable sing-along refrain – “You and I won’t be denied” – that could well be interpreted as an anthem for marriage equality in the Philippines.

After that, Moonwlk made their return to saGuijo. Let’s put aside the TMZ-esque speculation about the reasons for the duo’s long hiatus. Whatever alleged drama happened between Nick Lazaro and Gabbi Buencamino, it seemingly had the benefit of intensifying their well-crafted electronic pop.

It’s worth noting that Nick’s laptop was fiercely emblazoned with a decal that said “REAL INSTRUMENT”.  Maybe the producer doth protest too much? The pair led the crowd in a gender-split call-and-response of “Right now!” for the ladies and “Not yet!” for the men, during 'Your Electric Kiss Is Late Always'. The audience followed like a congregation to their minister. With a reaction like that, the defensive posturing seems a bit uncalled for.

(from left) Flying Ipis delivering their stately brand of electrifying dance punk and Moonwlk proving why they're one of the Pinoy scene's most beloved electronic acts.

Yolanda Moon’s smoothed-out Prince-ly indie soul felt like a comedown after the high of Moonwlk, but it was no less captivating. Singer Cholo Hermosa started things off from behind a keyboard decked out in blue Christmas lights. His vocal melodies hinted at middle-of-the-road yacht rock influences – and it felt more like self-confident attempt to broaden musical horizons than ironic appropriation. It seemed fitting, given how much the whole Fresh Filter Vol. 1 project is about embracing whole-heartedly the format of an earlier generation.

The final slot was reserved for cult favorites Cheats, and they’re tighter than ever. By now, they’ve just owned the whole Broken Social/Arcade/Stars comparisons, and focused on making that sound more cohesive. Their fans don’t mind that the group wears their Canadian indie rock influences on their proverbial sleeves, and just enjoy it for what it’s worth. All the familiar crowd-pleasers like 'Crash' and 'Accidents' resulted in fierce shout-alongs during the high-speed breakdowns.

At the end of the night, the gig was a study in contrasts.

It showcased artists using the tools of the bedroom producer age – midi controllers, laptops, digital synths – to replicate or even fine-tune the sounds of previous eras. It’s easy to write this off as retro faux nostalgia, but ironically, the reason so much 20th century pop music is so accessible is precisely because it’s so readily available over the web.

That’s also why it’s tempting to view Fresh Filter Vol. 1 as an exercise in analog fetishism. It’s clear that Russ Davis genuinely believes in the format – and so do his financial backers. Vinyl may not kill the MP3 star but it still has a niche in the post-iTunes audio marketplace.

Can Pinoy independent music grow within that space? With a compilation like Fresh Filter Vol. 1 off to a promising start, we'd like to think so.