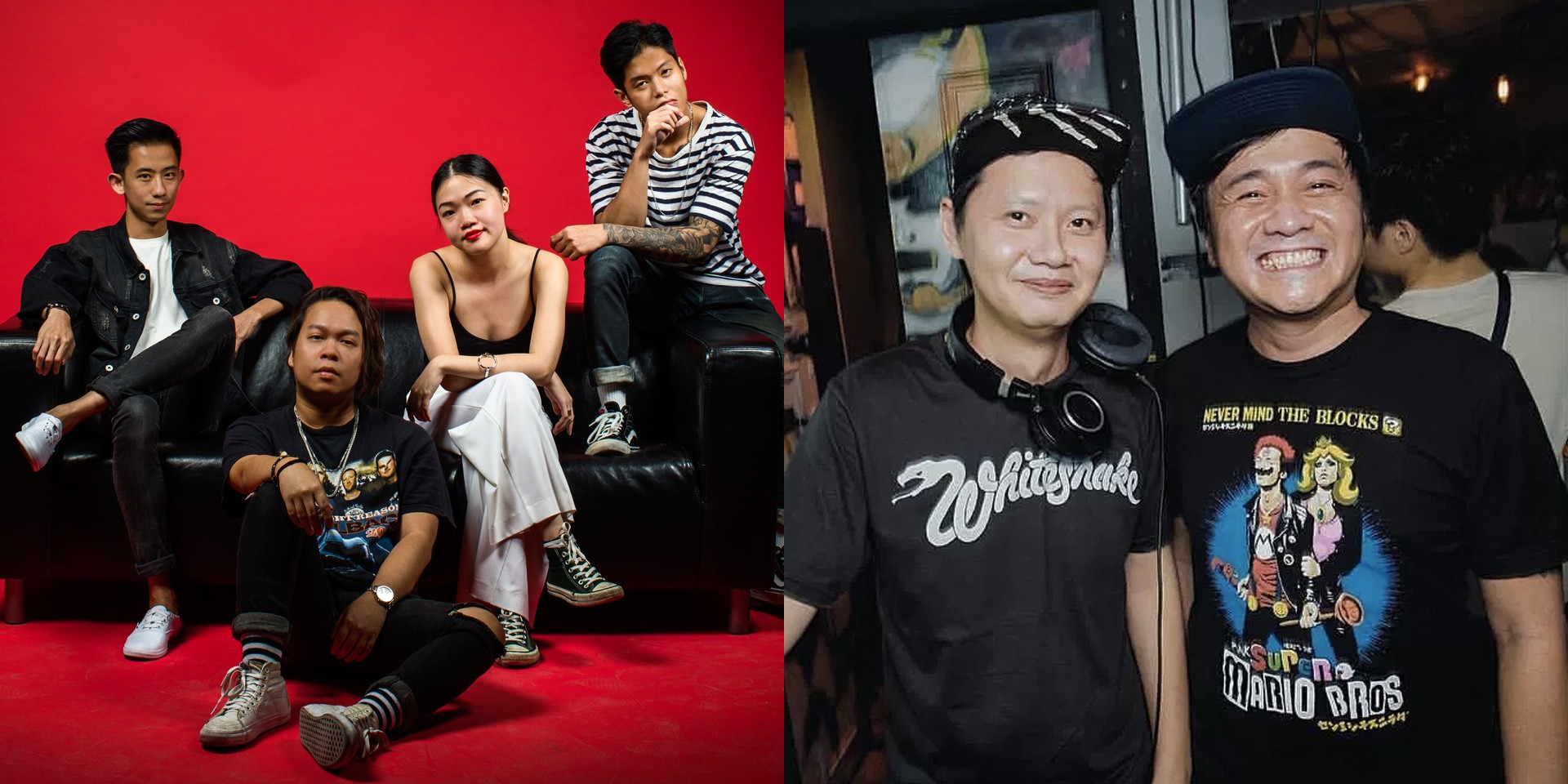 Our upcoming edition of the Bandwagon Riverboat invites a new breed of crew onboard. This time, they're the tastemakers behind EMONIGHTSG and the dynamic duo of EATMEPOPTART.

It's a little different from a standard night out on the dancefloor. Think less hypnotic beats and more euphoric singalongs.

Both crews pride themselves in digging into the days of MySpace, baroque anthems and angular guitars to provide nights of unparalleled fist-pumping goodness. They know exactly what to play that gets crowds moving, but do they know some of the tiniest, most obscure facts about the bands they endorse at every party?

Before both crews perform at the Bandwagon Riverboat on November 10th, we figured we'd sit them down over the phone and shoot them some questions to truly test their knowledge. On the side of EMONIGHTSG we have Edwin and Ritz, and for EATMEPOPTART, Adrian takes up the challenge. Here's how they fared.

Hey guys, let's start with My Chemical Romance. The band was on a major label for most of their career, but their debut album was released on a modest independent label. Can you name the album?

Edwin: "This is before Three Cheers for Sweet Revenge, right? Wow. I’ve seen the cover art for the first album. Is it something like I Brought You My Bullets, something something Your Love?"

That’s actually pretty close, you nearly got it right! There are three more words, “I Brought You My Bullets", but who brought who "Your Love”?

Edwin: "Really ah? I Brought You My Bullets, You Bring Me The Horizon (laughs). You Brought Me Your Love?"

That’s correct! Now, I’m going to quote lyrics and you just have to name the song. Cool?

Okay, so the first song goes:

"So darken your clothes,
or strike a violent pose,
maybe they’ll leave you alone,
but not me."

Great! The second one is,

“Too much, too late,
or just not enough of this.
Pain in my heart for your dying wish,
I’ll kiss your lips again.”

Edwin: "I know it’s from the Three Cheers album."

Yes, it is. But do you know the name of the song?

Edwin: "I’m just going to take a wild guess, is it from 'You Know What They Do To Guys Like Us In Prison'?"

It is, actually! Okay so for the last song, the lyrics are

“And if your heart stops beating,
I’ll be here wondering—”

Seems like you guys are more confident with the Black Parade stuff!

So now we’re going to move on to Saosin. I’ll start with an easy question. Can you name all three existing Saosin albums?

Ritz: "Is one of it the one with the beetle on the cover?"

Ritz: "Does that count?"

We'll give that to you guys. There are two more left!

Edwin: "The second one should be In Search of Solid Ground. The last one, I have no idea."

The last one was called Along The Shadow and it was released in 2016.

The next question: Anthony Green left the band in 2004 because he was unhappy about the band moving to a major label. True or false?

Ritz, what do you think?

The answer is false. Anthony Green actually revealed it in an interview last year — he said he was mainly scared of committing to the band. It had nothing to do with the band signing to a major label.

Where were you when you found out that Anthony Green was back in Saosin?

Edwin: "I remember seeing a video on YouTube of him performing with the band again, but I thought it was a one-off performance. I didn’t know he had officially joined again."

Let's move on to Saves The Day.

Close! It also starts with an E and they’re very well known.

So their lead singer, Patrick Stump, once revealed the weirdest thing a fan asked him to sign. What was it?

It's a crucial medical device for certain people.

It was a pacemaker.

Next question: Fall Out Boy was inducted into the Guinness Book Of Records. What was it for?

It's long, but you're not close. They actually had the most amount of interviews within a 24-hour span.

For the next portion, it’s going to be really easy. This is about Yellowcard.

How many times have they performed in Singapore?

Ritz: "It’s two or three. Two plus two is four, minus one, that’s three. But I think two."

Yeah, it was three. Next question. How did they get their name?

Edwin: "It has to do with soccer, but not in a game they played in."

Close enough. They used to apply soccer rules to any party they held in high school. So if someone did something, like spilling beer, they get a yellow card for a party foul. That idea was good enough was good enough for Ryan to name the band Yellowcard.

Our final question is going to be a tough one. It’s about Taking Back Sunday. They once had a feud with another band. What band was it and why?

Edwin: "One of them had their girlfriend’s stolen or the girlfriend cheated on them with a member of the other band."

You pretty much nailed it! John Nolan fronted Taking Back Sunday and he hooked up with Lacey’s girlfriend. That led to Lacey leaving the band to form Brand New. Did you know that before you guys first got into the band?

Edwin: "Yeah, I was reading up on it when it happened."

Thanks for taking part, guys! Before we end this, tell us what we can expect at the Bandwagon Riverboat this Friday.

Edwin: "You're going to see people from all walks of life coming together as one. It doesn't matter whether you are a banker, a tattoo artist, a lawyer, a student, a musician because at EMONIGHTSG — everyone leaves their titles at the door and just have the best time of their lives.

Get ready to lose your voices because you're gonna be singing/screaming along to songs you thought you forgot all the words to."

Let's start with Franz Ferdinand. The band’s name – who is it named after?

He’s Austrian, but he’s not a physicist.

Nope. All we can say is that he’s royalty, but there’s a specific title involved.

Not a Kaiser, right?"

Correct! This next question is a bit tougher – which DJ is mentioned in the song ‘Dark of the Matinee’?

Yes, he was an ex-BBC DJ. He’s since passed away, but he was quite popular when he was under the BBC.

Wait, was he the one the controversial one?"

Not exactly, he was actually named as the greatest BBC radio presenter of all time recently, by the BBC. His name starts with 'T'

I don’t think I know, I think it’s probably Terry something."

You're getting there. His surname rhymes with "Hogan".

(laughs) Terry Wogan? I’m not very familiar with him."

Yes! That’s fine. He may not be well-known outside of the UK, but the next band is. Let’s go to Queen.

You’ll need to guess the song based on these lyrics. The first one goes:

“I’ve paid my dues,
time after time,
I’ve done my sentence,
but committed no crime”

We Are The Champions!"

“How do you think I’m going to get along,
without you when you’re gone,
you took me for everything that I had,
and kicked me out on my own."

Another One Bites The Dust!"

Phenomenal, Adrian. You're doing well. Next one is The Killers and it’s going to be the same format. The first one,

“Seventeen tracks and I’ve had it with this game,
I’m breaking my back just to know your name,
But heaven ain’t close in a place like this."

This is ‘Mr Brightside’ right?"

“Can we climb this mountain, I don’t know,
higher now than ever before,
I know we can make it if we take it slow,
let’s take it easy”

This is not from the first album right?"

It’s not from the first album, but it’s from the second album. In fact, it was a hit single from the album.

Technically it’s wrong, but I’ll give it to you – it’s ‘When You Were Young’.

How do you think you're doing so far?

Don’t worry about it, we’ll give you enough time. The next one is The Strokes.

I think this is the one I’m the least familiar with."

We’ll just get it out of the way then. Name all five of their studio albums.

I think I only know the first two."

What are the names of the first two?

When it comes to The Strokes, do you guys only play songs from the first two albums?

Yes, I’m actually not much of a fan. But the more recent album…"

Do you remember the name? It has a big RCA logo on it.

I remember it was a pretty okay album… Comedown Machine!"

Correct. You've got 3 out of 5, so that’s not too bad! Let’s go to the next question: which actress has drummer Fabrizio Moretti had a long-term relationship with?

Was it Winona Ryder?"

No, but you’re kind of close — Winona Ryder comes from this prestigious class of actresses from a certain period in Hollywood.

Correct! The next one is Arcade Fire – the frontman of the band, Win Butler, deejays on the side – but do you know his DJ name?

I actually saw it earlier..."

You should be able to guess this then. The name is quite ubiquitous. You would’ve seen that name before because it’s not just a DJ name, it’s a name for something else.

Yes, you can say so. It’s a throwback name, so to speak.

Yes, it’s an operating system. But which OS? It was the defacto OS of its era.

Correct. The next question has to do with their third album The Suburbs.

For the music video of the title track, a popular Hollywood film director was responsible for it, do you know who it is? Hint: he also happens to be a very prolific music video director.

Nope, but you're already getting close.

Just to put you out of the misery, we’ve come to the last band – it’s Bloc Party. This one is going to be a bit tough, so we’ll start with the easier questions first.

The first question is: their second album A Weekend In The City was inspired by the music of a certain modern classical composer. Who is it? This composer is a huge figure in minimalist music.

I’m just going to make a wild guess and say someone like Philip Glass."

Glass is actually the only name I can think of in modern classical music." (laughs)

We’ve come to the last question: In an interview after the departure of two crucial members in the band – Gordon Moakes and Matt Tong – Kele, the frontman revealed the reason why they left, and it has to do with a single drug substance. What is it?

Your wild guesses have been right on the money. That's correct!

Eh, when you’re earning that much money, I think cocaine would be the go-to drug."

Thanks for taking part, Adrian. Before we end this, could you tell us what you have in store for the Bandwagon Riverboat?

The Eatmepoptart rock 'n' roll madness our crowds have been so accustomed to. We have two new faces in the line-up — Drujo and Zhan — so they will be bringing their playlists of indie pop, disco, electro and rock. Be sure to check them out as well!"

Bandwagon Riverboat feat. EMONIGHTSG and EATMEPOPTART is happening on November 10th at Stewords Riverboat. Presale tickets are officially sold out, however there will be a limited amount available at the door. Come early to get yours!