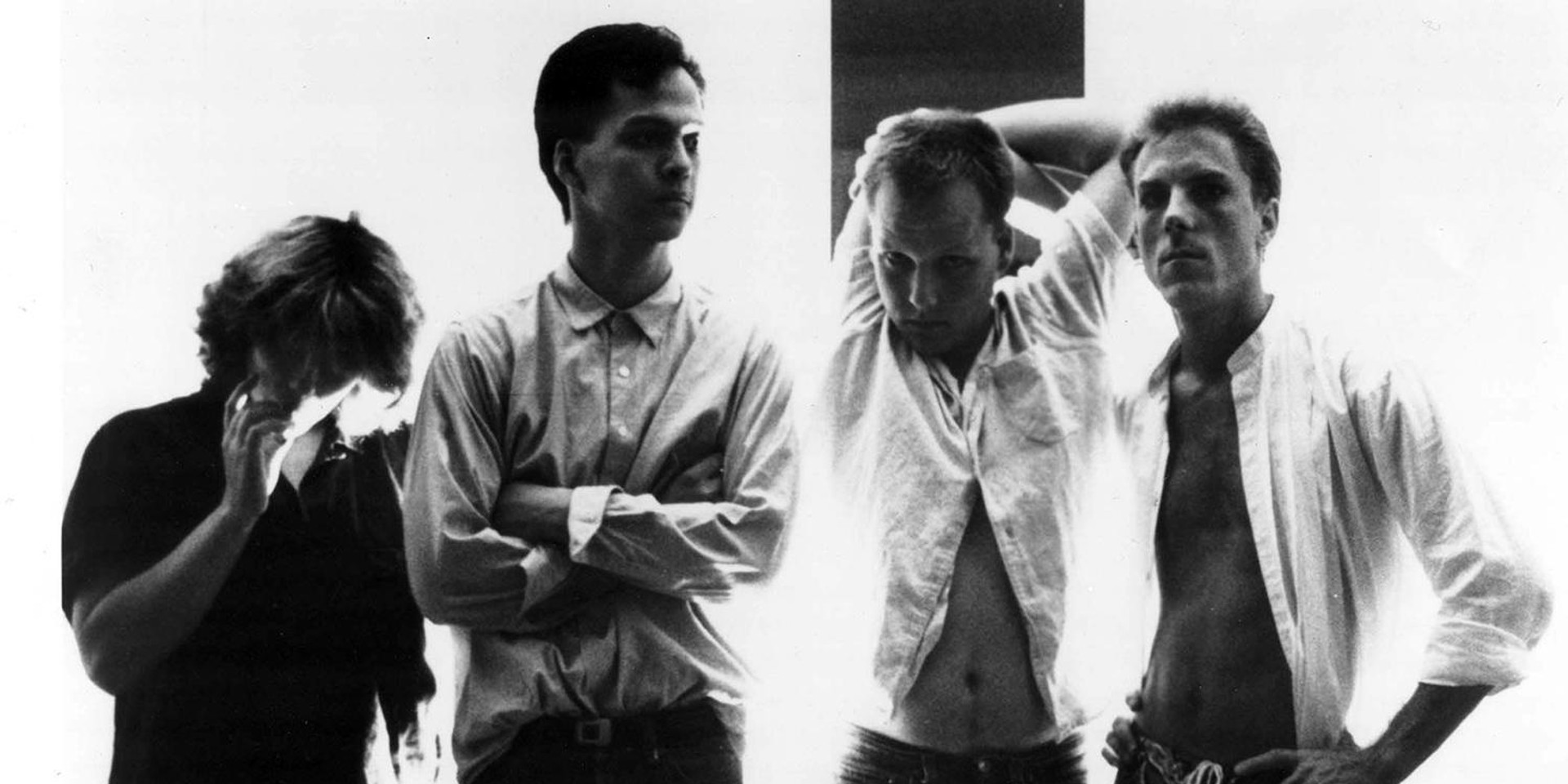 The Pixies were always cooler than Nirvana. While that might seem like a subjective opinion, let’s look at the evidence measured by an objective unit of coolness: David Bowie.

Even Kurt Cobain himself wouldn’t argue with the above statement — when interviewed about 'Smells Like Teen Spirit', the frontman famously said “I was trying to write the ultimate pop song. I was basically trying to rip off the Pixies. I have to admit it.” And while it was their debut album Surfer Rosa he put on his famous handscrawled “Top 50 Albums” list, Pixies never came closer to pop perfection than they did on its follow-up: Doolittle.

Doolittle exists in a perfect space in the evolution of the Pixies. Its predecessor Surfer Rosa is raw, abrasive, and angry. Its successor Bossanova is glossy, poppy, and wistful. Doolittle lands right in that sweet spot that the best Pixies songs occupy: a perfect, gorgeous blend of jagged punk and pop confection.

The Boston four-piece recorded Doolittle over the course of six weeks at the ass-end of 1988. While Surfer Rosa was produced by punk legend and famed asshole Steve Albini — with all the sharp edges that entails — Doolittle opted for a more deliberately commercial sound by employing pop-minded British producer Gil Norton (later known for perfecting the pop-punk formula by producing Foo Fighters, Jimmy Eat World and the like). Their bid for pop stardom was relatively successful: the LP charted in the UK top ten and spawned two evergreen alt-rock hit singles in 'Here Comes Your Man' and 'Monkey Gone To Heaven'.

The album feels cinematic in the true sense of the word. Much has been made of opening track “Debaser”’s allusion to Buñuel/Dalí’s surrealist film “Un Chien Andalou” – in addition to namechecking the film in the chorus, frontman Black Francis gleefully sings about “slicing up eyeballs” in reference to a well-known scene from the movie (you’ve definitely seen the .gif).

Francis said in a 1989 interview that "I got into avant-garde movies and surrealism as an escape from reality. [...] I recently read an interview with the director David Lynch who said he had ideas and images but that he didn't know exactly what they meant. That's how I write."

And Doolittle very much feels like a Lynch movie. But not a deliberate and artful one like Mulholland Dr. – no, it feels like his more dangerous and unhinged yet hysterically funny work, like Wild at Heart. It’s an aural transmission from The Black Lodge. 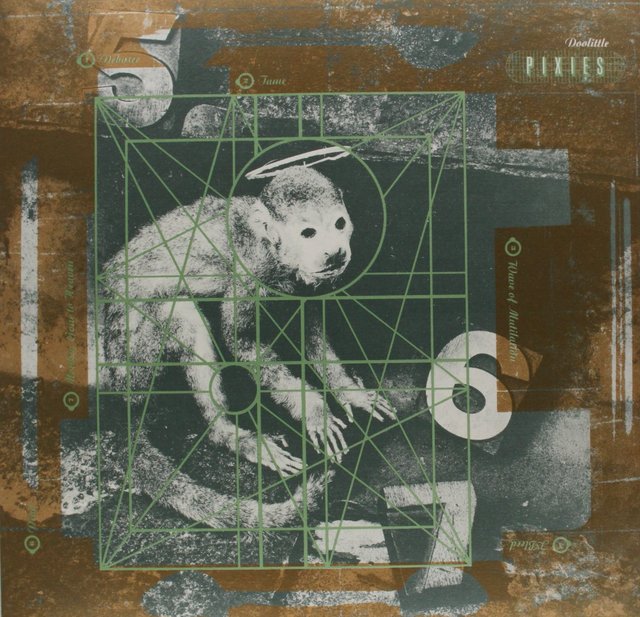 "The legacy of Doolittle can be felt everywhere in today’s cultural landscape. It showed the world that being punk as f*ck and poppy as hell do not need to be mutually exclusive concepts."

The subject matter runs the gamut from the banal to the sublime. Much like the repeated chant at the end of 'Monkey Gone To Heaven' – “if man is 5/and the devil is 6/then God is 7” – the songs concern themselves with the affairs of men and gods alike. Not exactly a revolutionary thesis, as the album cover bluntly depicts a monkey wearing a halo – and yet the Pixies make this unpretentious bluntness endlessly endearing.

Between 'Monkey Gone To Heaven', 'Dead', 'Hey' and 'Gouge Away', there are at least four songs directly invoking concepts from the Hebrew bible. Yet true to the Lynchian philosophy, Francis essentially admits to pulling everything out of his ass: “I don’t know a lot about it really”, he says. “I didn’t go to the library and figure it out”.

Songs like 'Here Comes Your Man' and 'La La Love You' are almost like childlike playground chants in their simplicity – the latter includes wolf whistles and a chorus of voices flatly declaring undying love and devotion. But they’re mixed together with weird, complex tracks like 'Wave of Mutilation', which Francis described as a fable about “Japanese businessmen doing murder-suicides with their families because they'd failed in business, and they're driving off a pier into the ocean."

The album is perfectly bookended by 'Debaser' and 'Gouge Away' – the former being a statement of intent to mess shit up, the latter making good on that promise by mixing the Hebrew legend of Samson and Delilah with stoner philosophizing, often within the same line (“you stroke my locks/some marijuana, if you got some”). Eyeballs are being sliced up on the first track, and on the last they’re being spooned out and gouged away.

Doolittle’s imagery is strikingly powerful and evocative. It’s hard to imagine it not having some formative influence on great 90’s-defining artists like Daniel Clowes, Richard Linklater, Charles Burns and Todd Solondz, who also mixed the minutae of humdrum existence with gigantic, theological questions. Black Francis perfectly encapsulates the themes with his vocal performance, a Bobcat-Goldthwait-in-Police-Academy-esque wail that forever seems to reach way, way beyond its own capabilities – a primate reaching for the clouds in frustration.

For all the talk about Francis’ lyrics and delivery, the other three members of Pixies are equally important. It is impossible to imagine Pixies without lead guitarist Joey Santiago’s indescribably unique guitar sound – he himself claims it to be “angular and bent”, which is as good a description as any. Francis calls attention to it on 'Monkey Gone To Heaven' with a cheesy squeal of “rock me, Joe!” leading into a solo, but it’s on shredding desert-punk tracks like 'Crackity Jones' where he really gets to shine.

Drummer David Lovering has never sounded better than he does on this album. Him and Gil Norton seem to have taken some cues from Ziggy Stardust in crafting the drum sound, which bafflingly sounds both crisp and hollow yet also warm and rich. (Mick Woodmansey of The Spiders From Mars famously complained that his drums on the Bowie LP sounded “like a bunch of cereal boxes” – that may be true of both records, but somehow it works.) Lovering also sings the beautifully cheesy lounge lizard chorus to 'La La Love You', seemingly as a warning of the danger in letting the drummer sing.

Then there’s bassist Kim Deal. The Breeders frontwoman is undeniably crucial not just to the Pixies, but to modern alternative rock in general. The precise twangy bass sound she provides is one thing, but she also frequently co-wrote with Francis and sings on several of the tracks – most notably on sludgy jam 'Silver'.

Without Kim Deal there is no Pixies, as evidenced by 2014’s reunion LP Indie Cindy. While this writer feels kinder towards it than most (in that I think it’s a 5/10 as opposed to a 1/10), it just feels wrong. You need Kim to sweetly back him up as Francis squeaks and sputters out the chorus to 'There Goes My Gun'. Together, they perfectly embody the “loud-quiet” dynamic of the Pixies.

The legacy of Doolittle can be felt everywhere in today’s cultural landscape. It showed the world that being punk as f*ck and poppy as hell do not need to be mutually exclusive concepts. 'Smells Like Teen Spirit' may have gotten the majority of the credit, but Doolittle consists of 15 dang “Teen Spirit”s. Even in a world where it consistently shows up on “Top 100 Albums of All Time”-lists, it will remain eternally underrated – always a debaser.

If you like this, you'll also like: Yeah Yeah Yeahs’ Fever to Tell, Black Lips’ Good Bad Not Evil, The White Stripes’ White Blood Cells.