The Smiths is a band best known for encapsulating the angst and depression that exist alongside the mundane drudgery of life.

The band's preference for the dramatic has often been criticized as pretentious and endlessly parodied, yet their sharply defined music has won them legions of fans. Their influence lingers on too, from '90s Britpop to contemporary indie folk music.

But of course, in their short-lived career, the album that features them in their most triumphant is The Queen Is Dead.

Released in 1986, The Queen Is Dead was a rare post-punk gem amongst the big hair, synthesizers-driven New Wave era. The album's opening title track perfectly captures their signature style — Mike Joyce's relentless drum beats, bassist Andy Rourke's spidery backing tune and the Marr-Morrissey partnership in full blast with closing lines like “Life is very long, when you're lonely.” Backed by Marr's jangly guitars, Morrissey's self-wallowing behaviour in The Queen Is Dead is more alluring than pitiful, and in fact, it can actually be funny.

'Frankly Mr Shankly' is a perfect example of this, a satirical song directed at Geoff Travis, the then-head of Rough Trade, that is filled with lazy insults — “Since you ask / You are a flatulent pain in the arse”. 'Frankly Mr Shankly' also proudly boasts a grossly exaggerated nature that highlights the band's supreme self-awareness: a jovial bass track backing Morrissey's wry claim of “I rather be famous than righteous and holy / any day, any day, any day”.

The Queen Is Dead features plenty of solid tracks that demonstrate the strength of the band's musicality and keen perception of human suffering. The purposely misspelled 'Cemetry Gates' has Marr's sunny melodies and Morrissey's glum behaviour interwoven with literary allusions. The wry grin and quick wit continues with 'Bigmouth Strikes Again' and 'Some Girls Are Bigger Than Others'.

Both songs allude to historical figures, Joan of Arc and Cleopatra respectively, and consist of comical elements, particularly in the latter. The Smiths' unmistakable mix of tragedy and dry humour makes The Queen Is Dead more palatable, especially when the album trudges into darker areas. 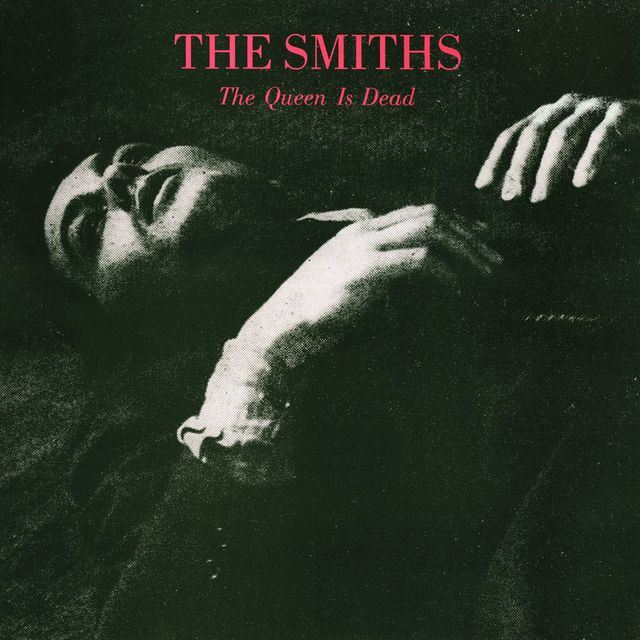 "...what arises in The Queen Is Dead is a remarkable sense of earnestness that evokes an accompanying catharsis. Their melancholy is so hypnotic and inviting, that you can't help being sucked in."

The dramatic ballad 'I Know It's Over' sees a man on the brink of death. It swells with Morrissey's soaring voice and Marr's gentle guitars, and it shows a more astutely mature side of the band. 'The Boy With the Thorn on His Side' is a commentary on the harsh reality of the music industry, but it also brims with a threatening desire for violence.

Ultimately, The Queen Is Dead peaks with the classic 'There Is A Light That Never Goes Out'. From the synthesized strings to the grim romanticization of car crashes, the song brims with despair and agony. It is easy to feel the pain and longing in Morrissey's voice and Marr's arpeggios.

With lines like “To die by your side / Well, the pleasure – the privilege is mine,” the song is a prime example of the highly morose displays from the Manchester band. The best songs in The Queen Is Dead come across as completely effortless, and are akin to a Greek tragedy; their dark themes will always remain eternally relevant.

Certainly, The Queen Is Dead suffers from some missteps. 'Vicar In A Tutu' is a cheeky tune, but it comes off more of as a tacky caricature, sticking out like a sore thumb amongst the album's heavier themes (much like 'Maxwell's Silver Hammer' in The Beatles' Abbey Road). 'Never Had No One Ever' suffocates under a self-pitying gaze too, more reminiscent of teenage moodiness than a dignified sorrow.

Regardless, what arises in The Queen Is Dead is a remarkable sense of earnestness that evokes an accompanying catharsis. Their melancholy is so hypnotic and inviting, that you can't help being sucked in. Only Morrissey knows how miserable you feel and that life is unfair and being in love is the worst. This year marks the 30th anniversary of The Smith's penultimate release and till today, The Queen Is Dead could very likely be the go-to album for you to lock yourself in your bedroom with.

If you like this, you'll also like: The Cure's Disintegration, Pulp's Different Class, and Frightened Rabbit's The Midnight Organ Fight