Never mind the drivers and their flashy race cars, there was only one thing on our minds: The Killers’ set at the Padang Stage! Since bursting onto the scene in 2003 (god, has it really been 10 years?) and making us sit up and take notice with their dancey new wave synthrock, the Las Vegas quartet has been on the rise. Who can forget the thrill that ran down our spines the first time we heard ‘Mr Brightside’ or ‘Somebody Told Me’? Over the next 10 years, they blazed a sonic trail and transcended their new wave beginnings to incorporate soul, Americana, and disco in their sound, firmly lodging themselves into our consciousness in the process. But at the heart of The Killers are anthemic rock songs filled with soaring choruses, big riffs, catchy hooks and triumphant lyrics and they certainly delivered on those.

It was a scorching hot Saturday afternoon and upon having our passes scanned, we made a beeline for the stage, taking stock of the handful of hardcore fans seated on the grass. Upon entering the fanzone, we spied a couple of girls with home-made Killers t-shirts, a girl engrossed in her book and a young couple near a corner of the barricade sharing a lovely moment. We also came across a group of guys drinking beer and playing cards and a couple with a huge Stitch soft toy in tow. Our rounds done, we headed out to explore the rest of Zone 4, keeping our eyes peeled for interesting sights. 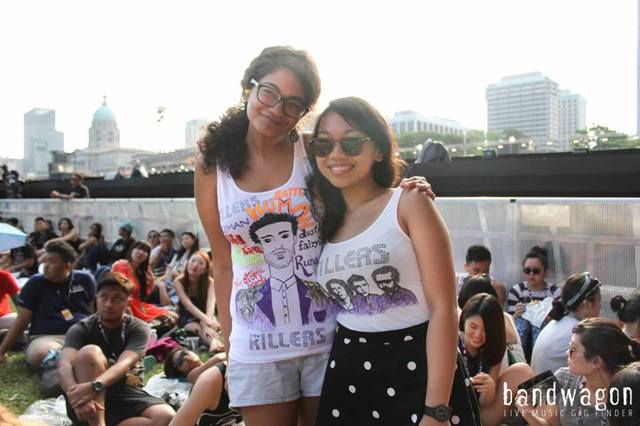 We were rewarded with giant pedal-powered insects, a wacky Japanese couple with the man dressed in a red wig, cape and Ferrari tshirt, and a group of tourists relaxing in lounge chairs near the Village Stage. There were couples and groups picnicking on the grassy field and at the back were hordes of people milling around in front of the food and beverage stalls enjoying a pint or two of beer. A quick scan of the stalls revealed the usual offerings of greasy grub like chicken wings, burgers and kebabs. After taking a look at the inflated prices I decided I was better off starving. $16 for a cone of fish and chips and $4 for bottled orange juice? Umm no thanks, I think I’ll save my cash. Thankfully I had smuggled in a bag of chicken nuggets from home which together with my bottle of water sustained me for the next several hours.

As show time neared, the anticipation grew and the moment everyone had been waiting for was almost here. The 60,000 fans gathered were finally getting to experience The Killers live. For those of us who have been fans since day one, Saturday’s show on our shores was a long time coming. They were originally scheduled to perform at the Singapore Indoor Stadium in 2010 but were forced to cancel due to Brandon Flowers’ mum’s illness, a decision which caused much teeth-gnashing and hand-wringing, and left many fans crushed and disappointed. Memories of that aborted show came flooding back when it was announced that they would be headlining the Padang stage on the second day of the Singapore Grand Prix, but all was forgiven the moment they trooped on stage slightly after 10.40pm to rabid cheers and screams. 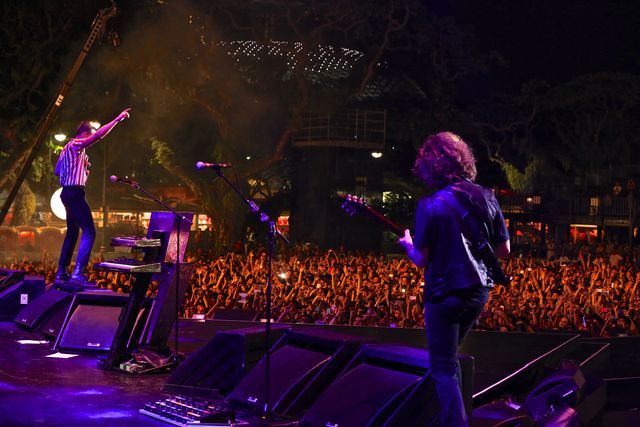 The band was in fine form, taking us on a one and a half hour ride through their discography spanning four albums: Hot Fuss, Sam’s Town, Day & Age and Battle Born. Given that ‘Mr Brightside’ was the song that introduced them to the world, it was fitting that the band kicked off with it. With its erotic tale of jealousy and adultery, it got everyone pumping their fists and bellowing the lyrics as they jumped. I’ve always harboured a soft spot for Hot Fuss, having listened to it endlessly when it came out and I felt an incredible rush at finally hearing that song live.

Dressed in a leather jacket which he shed at the end of ‘Spaceman’ to reveal a red and white candy-striped shirt (showing some love for Singapore there!) and black slim-fit pants, Brandon Flowers looked every bit the charismatic frontman. He was a tireless figure, working the keyboards and traipsing the length of the stage and the divider strip that separated the fanzone in half. His distinctive voice, high and strong, powered the night’s songs of fast rock numbers and slower mid-tempo tracks. Brandon was in high spirits and could hardly contain his joy, smiling so widely at times you couldn’t help but smile along with him. He also scored brownie points for commenting on how good-looking the crowd was and attempting to greet us in the four official languages. Credit too to guitarist Dave Keuning’s chops and drummer Ronnie Vannucci Jr, whose impassioned drumming was evident throughout the show. It was a pity that bassist Mark Stoermer was absent due to an injury, nonetheless his substitute proved adept. 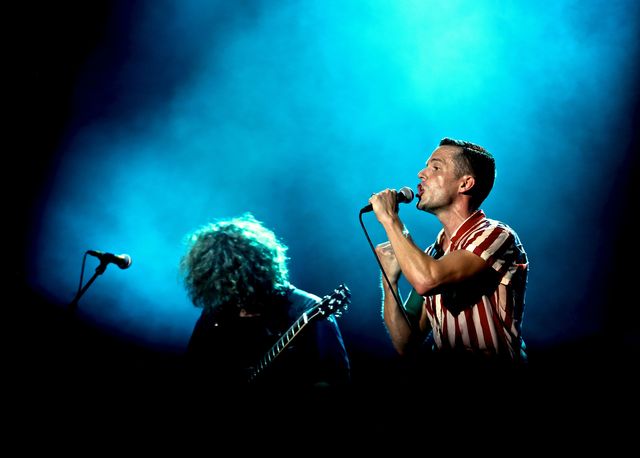 From the evocative imagery of ‘A Dustland Fairytale’ to the soaring exhilaration of ‘Read My Mind’ and a rousing rendition of ‘The Way It Was’, the enthusiastic crowd lapped it all up but the loudest cheers were reserved for their older songs. The driving urgency of ‘Somebody Told Me’, the uplifting neo-soul of ‘All These Things That I’ve Done’, and the drama of ‘Jenny Was A Friend Of Mine’ got everyone fired up and singing in unison. Songs like ‘Runaways’ channelled youthful rebellion and romance and brought to mind halcyon days of carefree youth. Given that their name is taken from a New Order video, they paid tribute to their ‘80s influences in the form of two covers: a heartfelt version of the Tiffany hit ‘I Think We’re Alone Now’ which Brandon said “still resonates today”, and a dance-worthy cover of the Joy Division classic ‘Shadowplay’.

The Killers ended on a high with ‘When We Were Young’ but there was one bit of drama we weren’t prepared for. Moments after Ronny tossed a drumstick which landed in our vicinity, the people in front surged forward then pulled back, and the force of the sudden movement knocked them off their feet. The rest of us who were unscathed immediately helped them up. Meanwhile, a scuffle had broken out amongst a group of fans. About 7 or 8 people had their hands firmly wrapped around the drumstick in a fierce tug-of-war and nobody wanted to let go. Everyone else stood looking on in shock and confusion and nobody dared to intervene. Suddenly the deadlock was broken and the drumstick came away in the hands of a guy. There followed a fiery exchange between two other fans; a girl in front was screaming at a guy to my right, the words “F*ck off!” were uttered and the guy stormed off amidst a torrent of abuse. A security staff intervened and requested the guy with the drumstick to hand it over to him, and after some resistance he complied. Just when everyone thought it was over, a tall Caucasian man started berating the guard for “stealing” the drumstick and demanded that he give it back to the guy. The guard eventually caved in and returned it, and the crowd cheered. The whole incident was supremely ugly to witness and left a bad taste in my mouth. Our photographer Kristina even saw one guy’s setlist get ripped in half! We’ve never exactly been great at looking out for one another but that felt like a low for our concert etiquette. 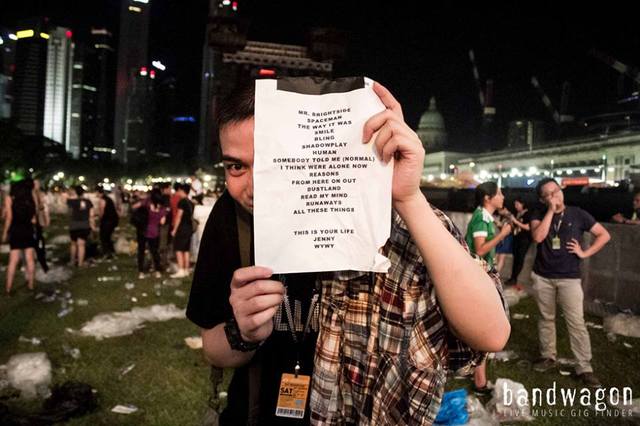 Ugly incident aside it had been a great show, big-hearted and full of soul, and one that definitely made amends for their no-show three years ago. I could find no fault with their set but if I really had to nitpick, it would be the omission of ‘Miss Atomic Bomb’. But really, I was just thrilled to have finally seen them live and that was all that mattered. With any luck, The Killers will be back and let’s hope it doesn’t take them another 10 years.