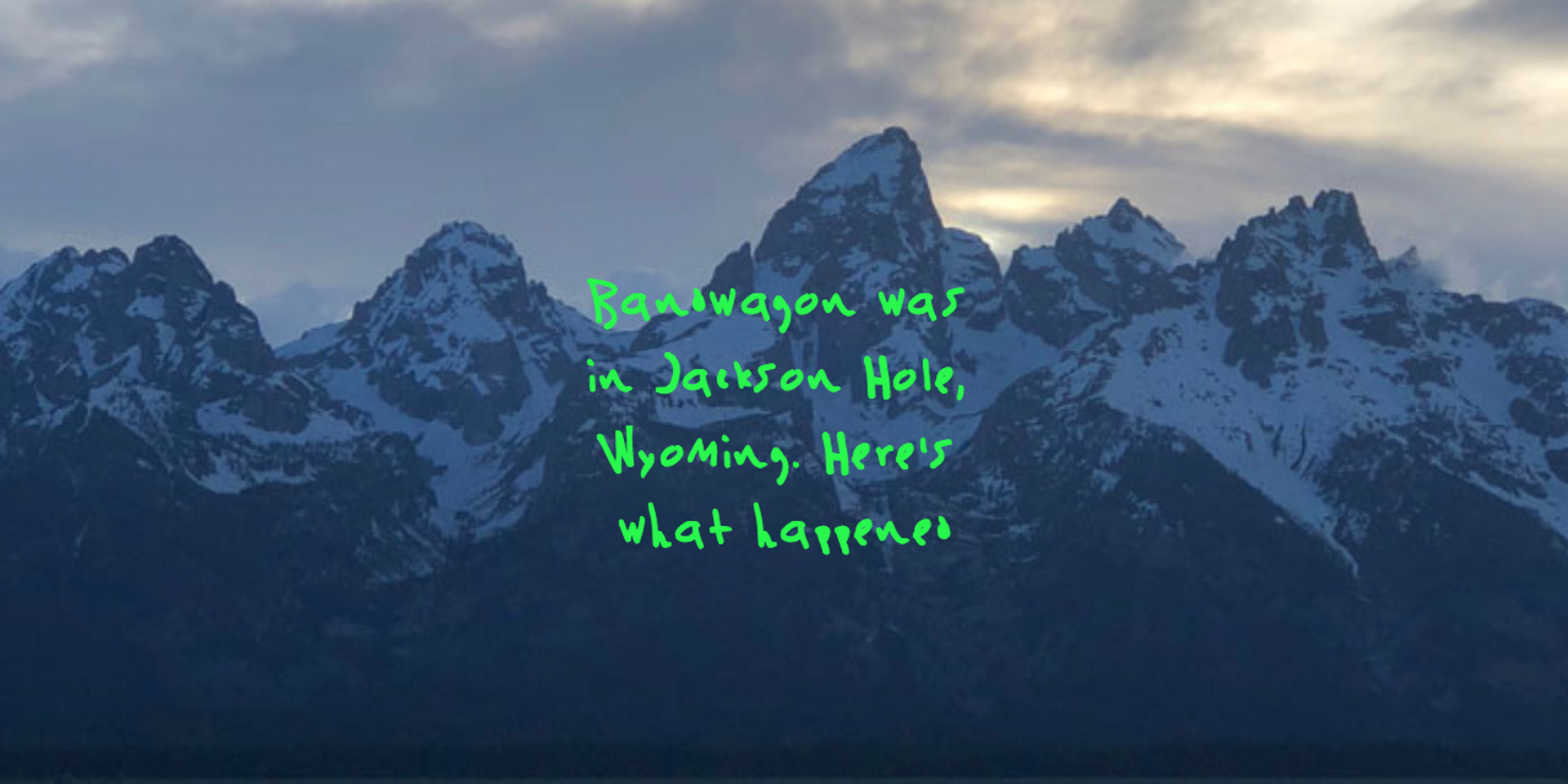 It’s been a week since Universal Music Singapore invited Bandwagon as the only Singaporean media representative to Kanye West’s intimate album listening party in a secluded ranch out in Jackson Hole, Wyoming. To be completely honest, I’m still a bit dazed about the experience.

When I found out I’d be flown out to the US of A with local, rap-loving influencer Preetipls to cover the event, I was simultaneously excited yet wary of what Yeezus had in store for us for the party celebrating his eighth studio album, ye (more on that wariness later).

And much like the neon green scribbled caption on the album cover (which featured an image Kanye reportedly captured in Jackson Hole on the way to the album listening party), the Wyoming expedition was full of ironies – an event that, for lack of a better metaphor, felt like a meme come to life.

Here’s a blow-by-blow account of the trip: from what happened in the hectic hours before arriving at the ranch, the surreal experience of cowboys and hip-hop royalty having a good ol’ Southern barbecue in a barn in Jackson Hole, to the anxiety-inducing delays and golden moments that made the entire experience what it was. 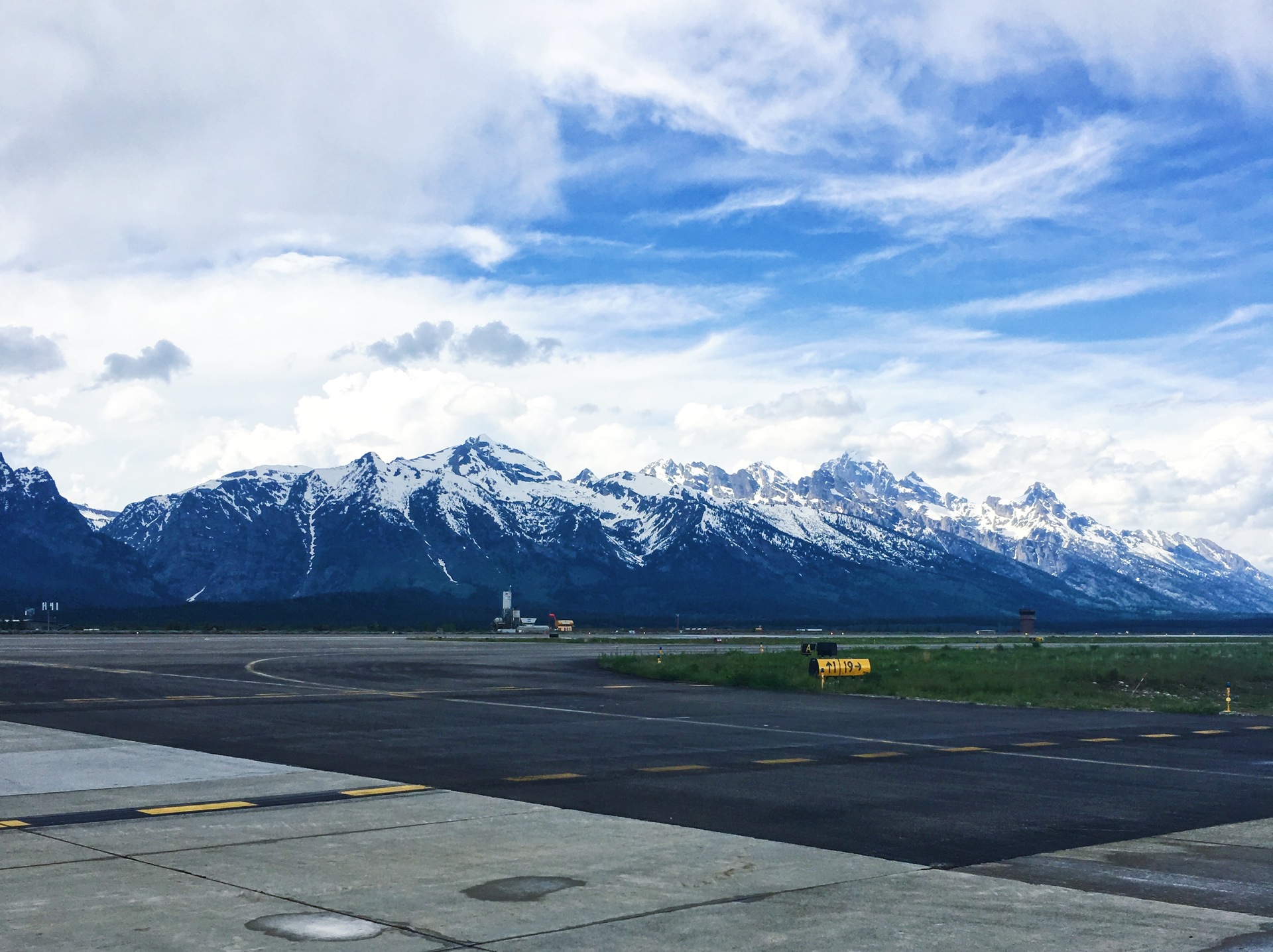 Chaos across the Pacific

Bandwagon found out we had been invited to cover the shindig on the evening of Saturday, 26 May — barely five days before the event itself.

Naturally we were stoked, but at this point in time, nothing had been confirmed and I was still unsure whether I was being flown to Los Angeles or New York City, and whether Kanye himself would be making an appearance at the album listening party. This uncertainty made the stakes feel much higher, and we were very aware of the fact that shit could blow up in our faces — especially because we were expected to fly halfway across the globe.

Kanye’s erratic behaviour and online antics have always made him one of the most polarising artists of the modern era, but his recent behaviour made this entire trip seem like more of a risk than usual. In the last month or so alone, Kanye has dominated headlines for claiming that slavery seemed like a choice, that Donald Trump is his “brother” because he also has “dragon energy”, and for supporting black right-wing, anti-Black Lives Matter pundit Candace Owens (who, as it turns out, was at the Wyoming event after all).

These are headlines that Kanye fans in Singapore read with a possible range of reactions: from intense disappointment to vague, disconnected dread. Unless you’re living under a rock, you’re aware of the state of US politics, but this does not necessarily make us completely empathetic to the emotions and experiences of Americans, whose lives are so far away from our own.

Personally, I wondered how this would affect not just my experience, but the experience of Americans — more specifically black Americans sure to be at the event — who are inevitably far more invested in the controversial political statements Kanye’s been making in the lead up to ye’s release.

On the evening of Monday, 28 May, it was finally confirmed that I would be flying out to Los Angeles before heading to Wyoming for the album party itself. I had no idea what to expect, but I was sure as hell excited for whatever was to come. 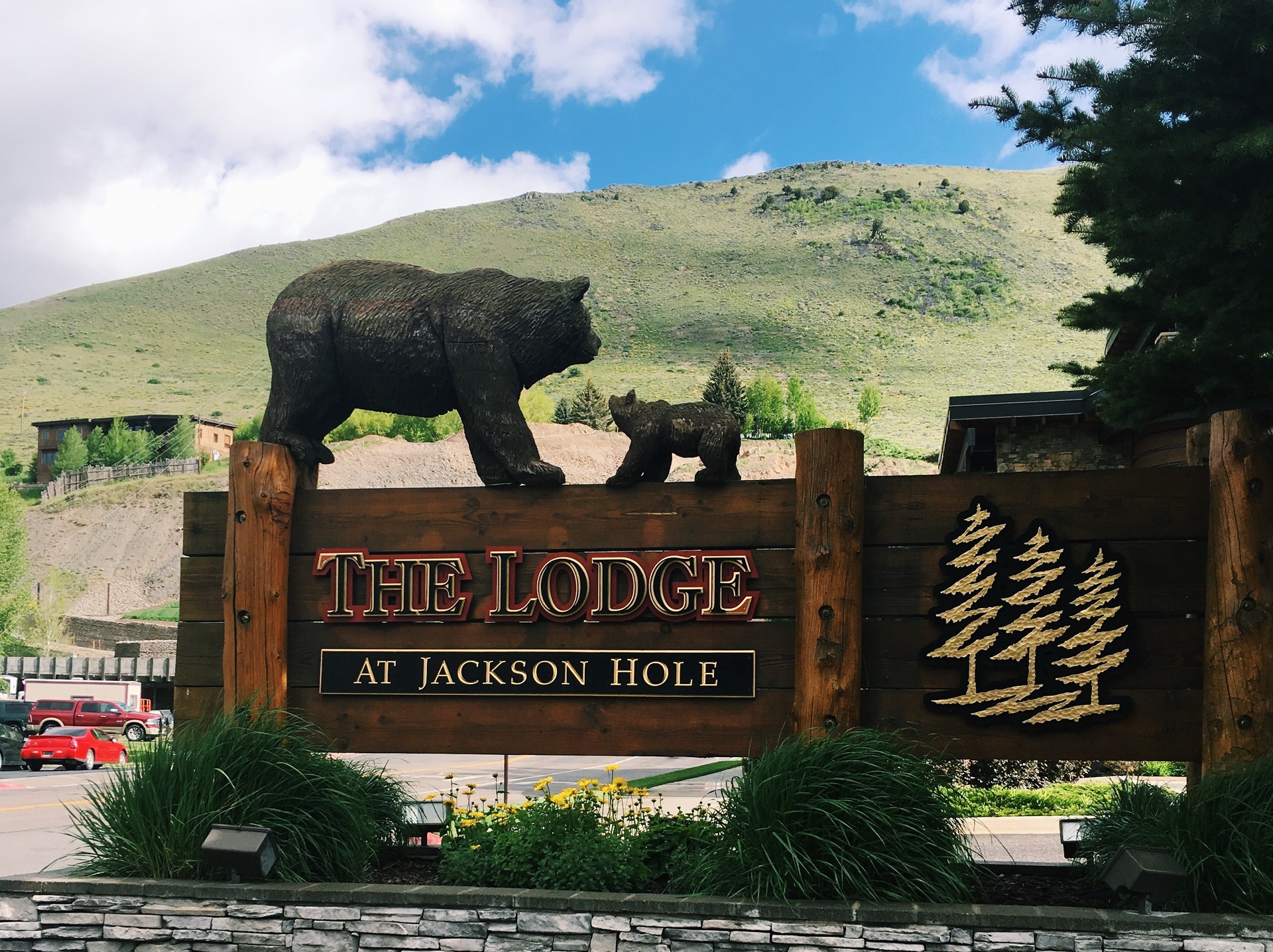 The journey to Jackson Hole

My journey began in the wee hours of 30 May (Singapore time), where I would take an 8-hour flight to Doha, Qatar followed by a 16-hour flight to the States.

With the next day’s exact itinerary still yet to be confirmed, I ate as much plane food as I could for uncertainty of when we’d have our next meal. So, with tummies full and greasy hair, we arrived in LAX after 24 hours of flying, in the afternoon (Pacific Standard Time) of 30 May — time’s funny that way, eh?

Just before midnight, we received an email from Def Jam telling us that our flight to Wyoming the next day would take off at 11am, and that we had to report at the airport no later than 9:30am. So, a full 18 hours after landing, we were back at LAX’s private Atlantic terminal to await our chartered plane. Being the kiasu Singaporeans we are, we arrived just shy of 9am and fully expected to take off at the stipulated time.

Though we weren’t the first to arrive, most of our fellow passengers only trickled in after 10am. A crowd that was predominantly composed of hypebeasts we assumed were Instagram influencers, we were also joined by GOOD Music’s Kacy Hill, bonafide influencer Lukas Sabbat, and the one and only Lil Yachty.

While waiting for more people to show up, I noticed Senator Dianne Feinstein quietly pass through for a flight of her own. Seeing her perplexed smile as she surveyed the crowd of Wyoming-bound travellers who probably didn’t give a hoot for who she was, this encounter seemed to foreshadow the juxtaposition of characters we’d see more of at the event itself.

The wait seemed endless, and every minute that passed seemed to take us further and further away from Kanye and the ranch. My fear was only compounded when we overheard that the contingent travelling from New York City was in chaos as they’d booked a jet for 60 people, yet more than 80 passengers had shown up.

At about noon, we were told we could begin boarding the plane. Following a security check (right on the tarmac!), we were seated and ready for take off.

Except we didn’t. About half an hour into waiting, the captain made an announcement that we were waiting on more than 40 people to confirm whether they were coming.

While waiting for these stragglers to potentially make an appearance, the crowd got restless. Some sedatives were passed around out of a Beats headphone case, and I eavesdropped on conversations about how much weed people would smoke once in Wyoming to combat the stress of the morning. All the while, I was slowly dying inside.

At about 1:15pm, after Lord Scott Disick quietly snuck on the plane, the captain announced that we were good to fly. Relief washed over us — we were finally on our way to meet Kanye. 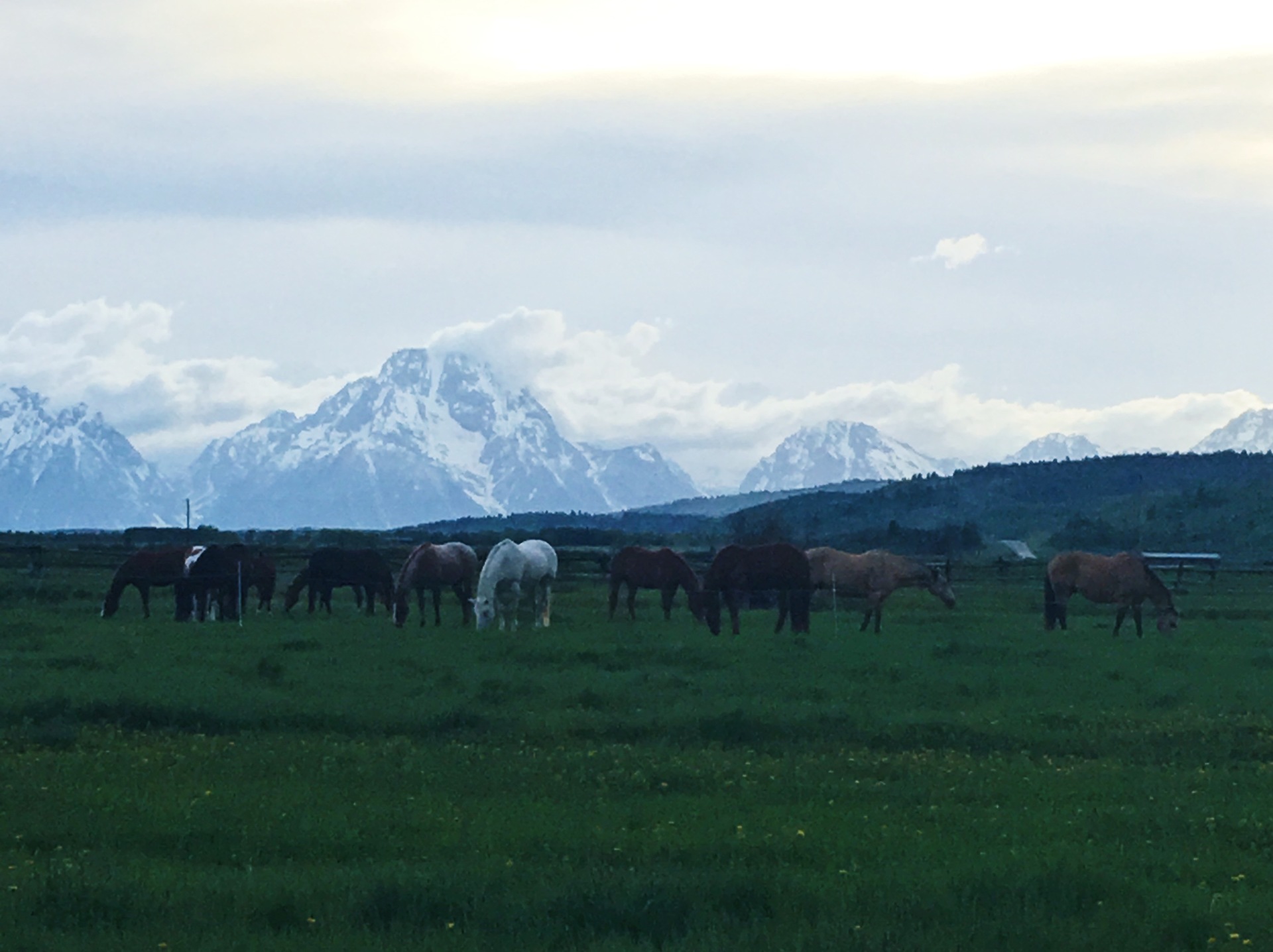 After landing in Jackson Hole there was more confusion regarding accommodation, but we had finally made it. Quickly dropping our things off at the hotel they put us up in, we boarded a bus to the venue for the party.

An hour later we had arrived at Diamond Cross Ranch, a setting that had us feeling like we’d walked into a children’s storybook: the sky was clear, we were on a ranch in a far off place, there were a few bonfires being prepped, and there were horses running free in the field next to us.

Guests trickled in and things slowly got less like real life as we found ourselves sharing air with the likes of Nas, Kid Cudi, Big Sean, Chris Rock, Jonah Hill, 2 Chainz, and Kim Kardashian.

Guests in Yeezy shoes and oversized hoodies were walking around amongst true-blue American cowboys dressed non-ironically in flannel, cowboy boots and hats, and it took all my self-control not to freak out and/or burst out laughing at the surreality of the entire situation. 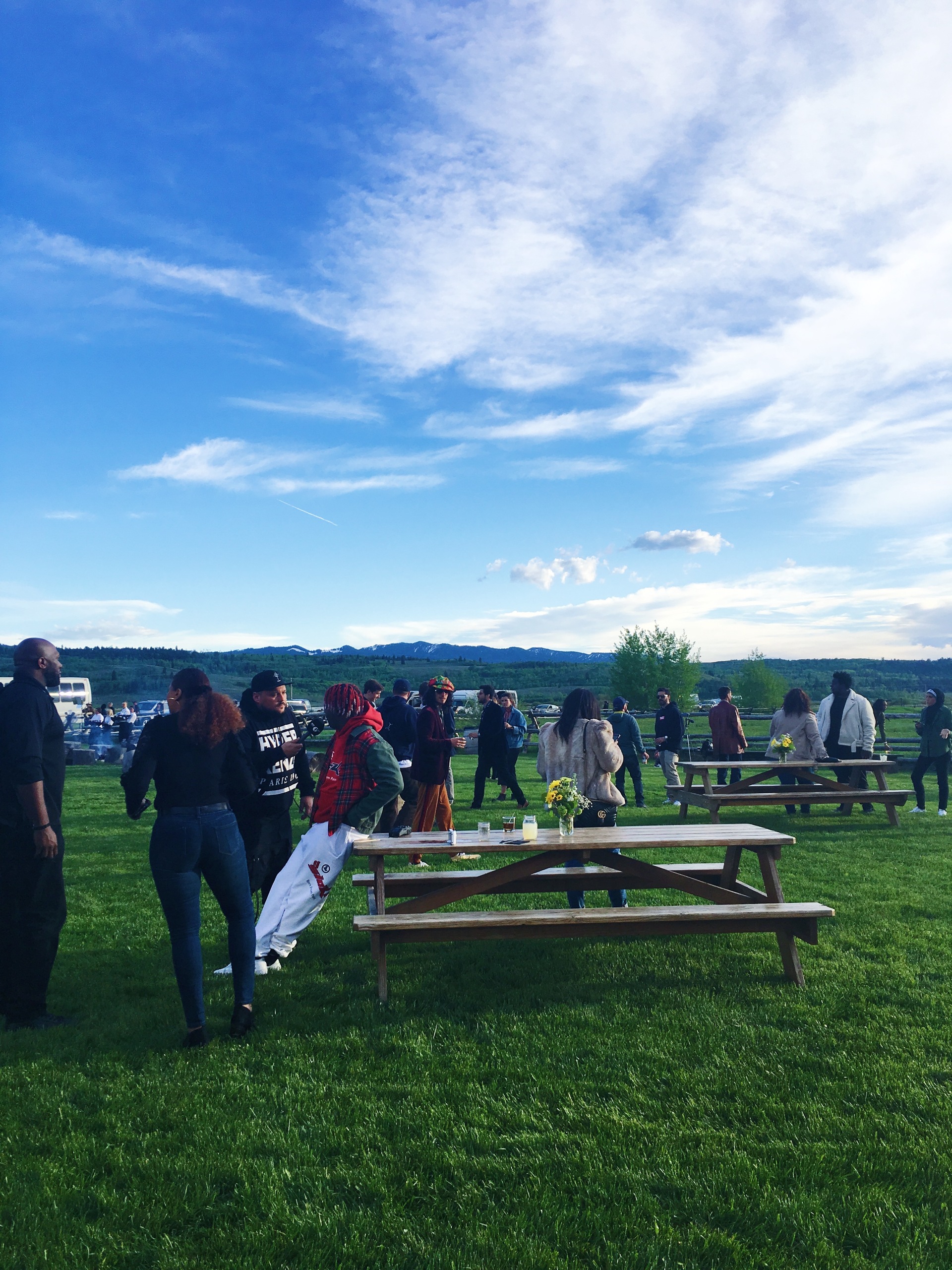 Around 10pm, after we’d ogled our fill of A-listers, consumed copious amounts of barbecue and snagged some of the Yeezy merch they were handing out (not selling) to guests, we were told to congregate outside by the bonfire for the album listening.

Finally, the moment we’d travelled halfway across the globe for had come.

After a short introduction by Chris Rock, and while freezing our asses off in a crowd full of people already wearing their Wyoming hoodies, ‘I Thought About Killing You’ began blasting from the speakers, its monologue-driven intro creating an almost cultish atmosphere in the field.

It dawned on me at that moment that this was probably going to be something for the history books, and all of the calm and inner tranquility I’d been tapping on inside the barn seemed to disappear. As soon as the beat dropped, we were all gone.

With hands raised, big smiles, and swaying hips, we forgot how tired we were, how crazy the event was, how controversial Kanye is, and simply let ye’s beats wash over us like the warm blanket we so desperately needed in that cold field.

Almost as soon as it begun, though, the 24-minute-long album ended. It didn’t take long for them to play it back, and the second round seemed louder and more frenzied as guests, now more familiar with the beats, danced and rapped along. 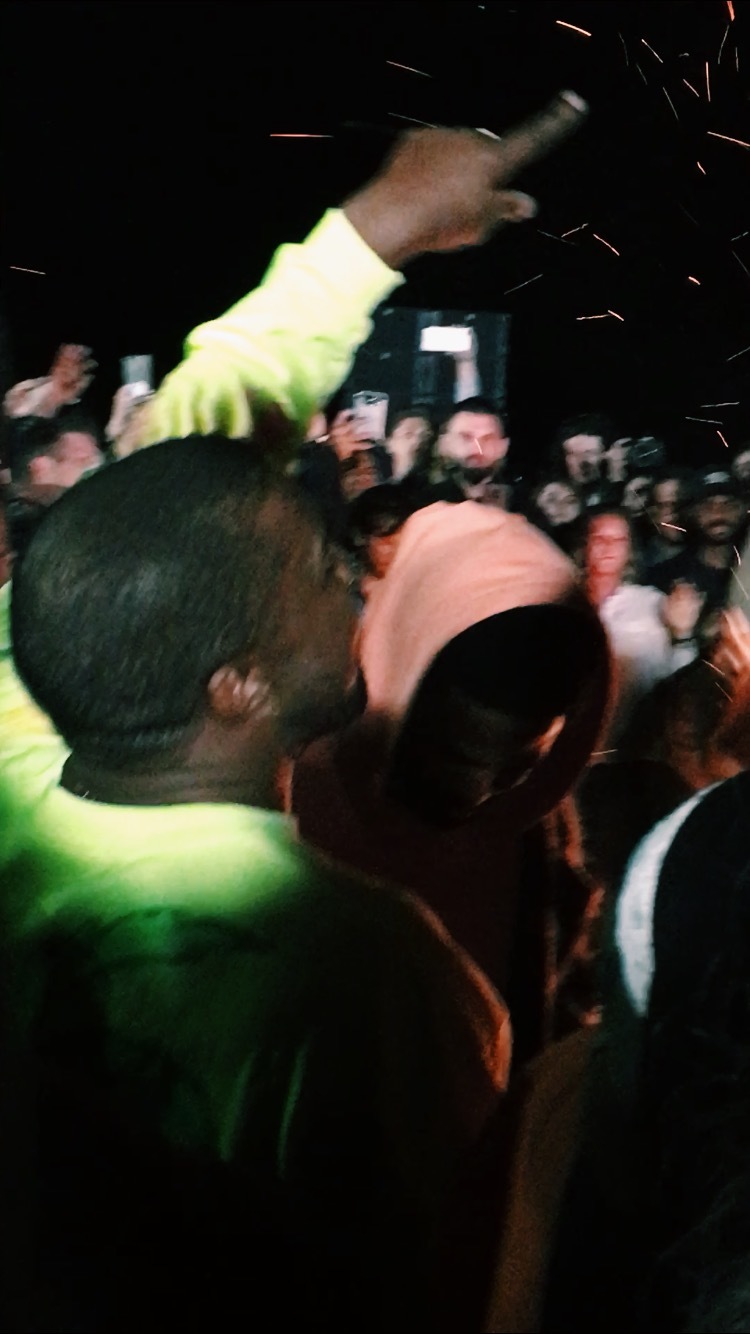 Kanye West vibing out to ye

About halfway through, Kanye’s entourage (famous rappers included) began pushing their way through the crowd, creating a path for the star of the night to walk through.

To say that it was mayhem is an understatement. I was unceremoniously shoved aside by 2 Chainz and nearly trampled on in the ensuing surge of people attempting to get closer to Kanye, and I had a moment there where I thought I might very well die in Jackson Hole.

I decided it was time to move away from the middle of the crowd and positioned myself on the edge, enjoyably watching other guests smoke blunts and lose their shit.

It was during this time that I reflected on where we were, and how the incongruity of this Wyoming setting mirrored the conflicting traits of the man we were there to celebrate that night. As one of the most economically imbalanced cities in America and a place that has been simultaneously dubbed a playground for the country’s rich elite, Jackson Hole, Wyoming and its mish-mash of guests – a blend of the media, celebrity friends from music and Hollywood, and average Joes from the town itself – well embodied all the troubling ironies of American society.

I’m not American, but it was a feeling that stirred something in me. I was beyond grateful to be there in the first place, but being highly cognisant of where we were and why we were there only added to the overall surrealism of the event — and it’s a feeling that hasn’t quite left me yet. 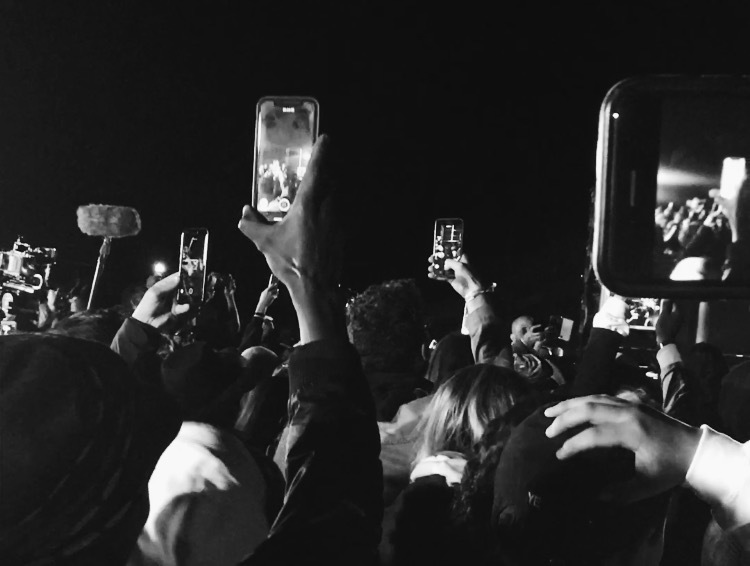 Less than 24 hours after landing in Jackson Hole, we were back on a plane to Los Angeles (with brand new Yeezy 500s in hand), readying ourselves for the next day’s long-haul flight back to Singapore.

Overall, our little trip consisted of about 65 hours of traveling, 72 hours on the ground, and plenty of moments and memories we’ll take with us for the rest of our lives. It definitely wasn’t the most well-planned, but it was definitely everything you’d expect from an artist like Kanye.

Though ye has thus far received mixed reviews from critics, Kanye’s fans have helped the album debut at #1 on the Billboard 200 charts, in addition to being the top album in over 40 countries on iTunes. There are also more Project Wyoming events planned in other American cities.

It was a truly wild ride, and for that, I’m grateful to have been a part of it all. 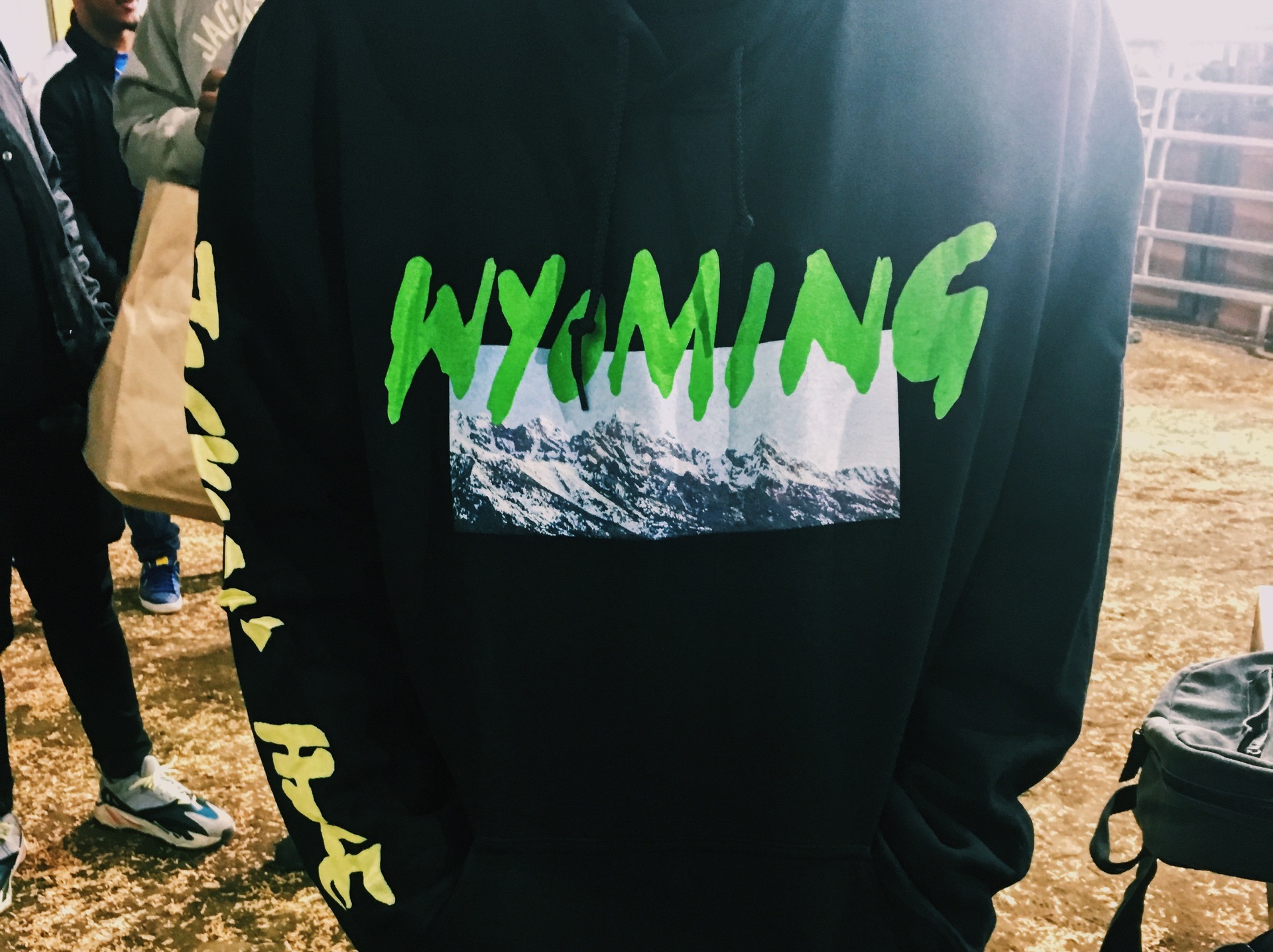 “It’s supposed to start at 7pm, but who knows. We all know who we’re dealing with here.” – Yeezy crew member

“He’s supposed to be my friend!” – Scott Disick (we have no further context for this)

“Seth Rogen is literally right next to you!” – me
“Dude, that’s Jonah Hill.” – Preetipls