After the amazing musical extravaganza at the Tanjong Pagar Railway Station last year that was the Fred Perry 60th Anniversary Party, the folks at Fred Perry Singapore have been pretty mum about their music events. Other than partnering up with festivals such as FMFA, Camp Symmetry and recently opening The Laurel Wreath Collection Shop, the popular Fred Perry Sub-Sonic Live series hasn't been seen or heard for more than several months already.

That has changed with the recent announcement of Fred Perry Sub-Sonic Live 2013 on November 1st, an expansive edition of the brand's music initiative with not just one stage, but three performance areas, each comprising "a distinct performance format and sound". In typical manner, Fred Perry has picked yet another unorthodox venue to hold the event - this time at Offside, a futsal park underneath Thomson Flyover (with cages, synthetic grass and all). 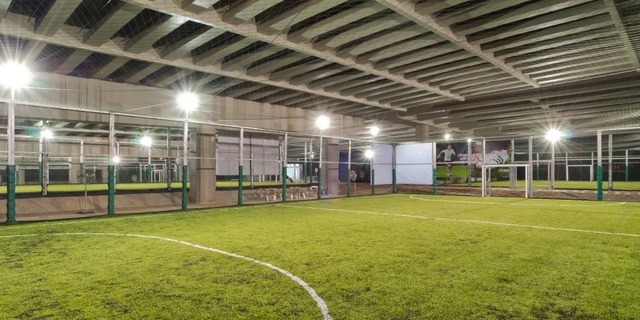 They've also roped in Jeremy Lee (who performs under the moniker Hell Low) of The Diarists collective and mastermind behind The Diarist Open Mic sessions and the Sunday Folke series as music curator. His selection results in one of the more sonically complex editions of Sub-Sonic yet, with the likes of post-progressive rock exponents ANECHOIS and prog/experimental innovators sub:shaman & Horns taking the electric stage, while the moody pianos of These Brittle Bones and the folksy guitars of Hilary Yang take the acoustic dais. DJ collective #Vinyloftheday will also be making an appearance in the electronic side of things, with vinyl connoisseurs Kurt (Clash The Disko Kids), Darren Dubwise and Gerald Ang. All the way from Subang Jaya, Malaysia, dance-rock wizards Enterprise will also grace the show, along with a mystery act from the United States. We walk you through the diverse lineup right here!

It's been a while since we saw the ANECHOIS lads perform live and we were all sad to see original guitarist Justin Koh leave the band. His replacement however, came in the form of guitar genius Ahmad Khaliq (of Silhouette and the now defunct Amateur Takes Control). This will be the first show with their new lineup, and we honestly can't wait to hear how their prog-rock influenced post-rock sound is now.

The band is already pretty formidable in their forward-thinking sonic experimentations and off-kilter melodies… but sub:shaman performing with a horn section? It's gonna be off the hook. Definitely something to experience live.

Chris Jones has always impressed us with his effortless piano-driven compositions, combined with a musical maturity that completely surpasses his teenage years. No doubt he'll impress us again - and this time with his pensive, ambient-filled music echoing underneath the Thomson Flyover.

We've heard nothing but good things about this young singer-songwriter, who's been active in the cafe circuit, playing in venues such as Bellwethers, Shots Cafe and Artistry. She's also gained a bit of following on her YouTube page, performing covers and originals amidst the backdrop of local scenery.

We first caught Enterprise at Urbanscapes 2012 at KL last year, and man they blew our minds. Their intensely danceable songs generated one hell of a synth-rock party under the canvas canopy amidst the muddy grounds of Padang Astaka - they were easily one of our favourites from the festival last year. Now that they're confirmed for Sub-Sonic Live next month, we genuinely hope that you guys will be mentally prepared for an intense frolicking session during their set.

Individually, Kurt, Darren and Gerald are already established DJs in their own right. But put them together in a collective that preaches a "vinyl only" principle, and the results are pretty damn astounding. Anyone who's ever been to their Wax On Wax Off parties at Loof already know how good #vinyloftheday are on decks, and now you will too at Sub-Sonic Live.

Knowing that Camp Symmetry is happening the very next day on November 2nd, the act could all the more be someone from the lineup. Knowing that the act will be from the United States narrows it down further to a potential appearance by Explosions In The Sky, Best Coast, Ra Ra Riot, Wild Nothing or William Fitzsimmons.

Yesterday night, the folks of Fred Perry proved us right - New York baroque pop outfit Ra Ra Riot will be performing in Sub-Sonic Live, one day before their appearance in Camp Symmetry! Imagine experiencing their hallmark chamber indie rock underneath a flyover, chilling on fake grass. Now nobody has an excuse to miss out on this (literally) underground party. We'll see you on the astroturf this November.

Win a pair of invites to the show here!