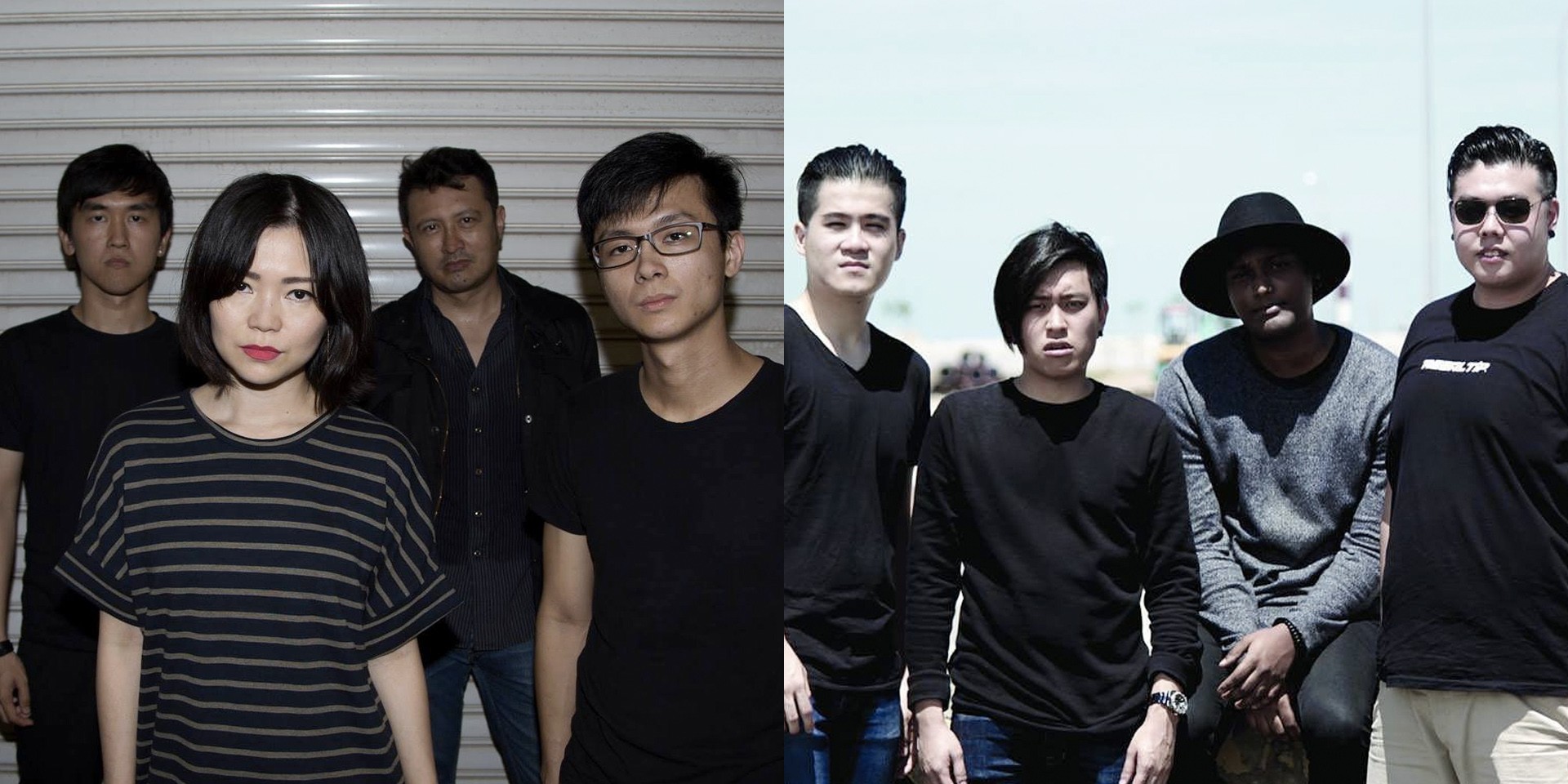 Fred Perry's groundbreaking Subculture Live series of gigs is returning on 13 October, a celebration of the subcultures that form the modern zeitgeist.

In the brand's upcoming gig at Esplanade Annexe Studio, they've roped in two outstanding Singaporean music acts, both of whom have drawn from various British music subcultures over the years to carve their own paths — Astreal, being indebted to the shoegaze greats, along with The Betts and their fascination with the many forms of British rock: from jangly Britpop to the genesis of punk rock.

In the spirit of Fred Perry, we thought it would be fitting to test their knowledge on the music they draw from — we engaged Astreal's frontwoman Ginette Chittick, a bonafide music nerd, and The Betts' spirited frontman (and Oasis fanboy) Jonathan Pereira. Here's how they fared.

We're going to start off our quiz with Oasis.

Do you know where Oasis got their band name from?

They were originally called Rain or Thunderstorm, I think. I know this one, give me a while."

(Pereira takes a while to think.)

Does it have anything to do with the carpets? Am I even close? Lay it on me, man."

The Gallagher brothers had a tour poster in their room, with the venue listed as Oasis Leisure Centre. The band adopted that name for themselves.

That's it? That's literally it? Are you serious?!"

Yes, one of the greatest bands ever got their name off an underground gig poster.

My God. I'm a huge Oasis fan, how did I not know this earlier."

Well, buckle up. We're going to ask you a question on Blur.

Sorry, we're afraid we have to. At what age did Blur's Damon Albarn perform his first gig?

Can you name all six singles off their debut album?

Their debut album was Inside In/Inside Out right? (Proceeds to hum all the songs) Er... 'Naïve', 'Sofa Song', 'You Don't Love Me'. Sorry man, I need to sing it out."

We can't tell you.

You've got it! Let's move on to The Sex Pistols.

God save the queen!"

What food item did frontman Johnny Rotten, aka John Lydon, appear in an ad for?

He appeared in an ad for a food item? What?! I'm assuming it had to be some something really British right? Marmite?"

Not really, but since you said Marmite, we'll give you a hint: it can be used as a spread, among other things.

Marmalade? It can't be chocolate, he doesn't seem like a chocolate guy. Okay, fine. I give up."

John Lydon appeared in an ad for butter, using the money to fund the reunion of his other band, Public Image Ltd.

Are you serious? That's the last thing I would've guessed."

Moving on to The Libertines. In a recent interview with NME, the lead singer, Pete Doherty directed the magazine's photographer to the backstage toilets before a gig. What did he do next?

I have a lot of ideas, not all of them are family-friendly."

Did he flash himself?"

Are you serious? Oh my God, this is recent, right? I thought he was clean already? But then again it's Pete, so I'm not too surprised."

Moving on to Gary Powell, the drummer and Carl Barat performed in Singapore once. Do you know where it was and when it took place?

Gary Powell and Carl Barat performed in Singapore? Must've been some time ago then. Home Club? Not sure about the date."

Before we end things off, tell us what Fred Perry means to you!

When you ask your parents about Fred Perry, they'll just say it's a clothing brand, that's what it meant to them. But for us, it's more than that.

We associate Fred Perry with music, the underground culture, the cool kids. It's a brand that has been involved with the greatest styles of British music. It's honestly something we wish we had in Singapore, to have a brand represent younger kids, with their music and clothes.

That's something we don't have here. But now, at least we have it here. It's a great thing."

Watch a performance by The Betts:

Let's start off with Slowdive, since you just watched their documentary last night. Slowdive released the album Souvlaki in 1993. The title of the record was inspired by something very unlike the regal dreaminess of the album's music. What is it?

Is it some sort of a cake? Souvlaki sounds like a Russian souffle."

It's a Greek snack, but the band got the name from a comedy skit by American pranksters The Jerky Boys. It's quite sexually explicit, and it involves repeated use of the word.

Oh no, that's terrible! Yeah, they should've just said it was a souffle from Russia. Their music is so clean, the name seems so out of place now."

During the recording of Souvlaki, a member of the band went through a particular phase, and was heavily influenced by it. Who was it, what was the phase and how do you think that affected the album?

I know the lead singer was going through a break up. I just watched the documentary yesterday but I can't remember his name. He was very interested in David Bowie so it must've been him."

I'll give you a hint. Who was the break up with?

Oh, Rachel?! What was the phase she was going through, though?"

She was heavy into the goth scene at the time.

Burning Peacocks, wasn't it? I don't know the other one though? Tasty Tuna?"

They were Burning Peacocks and Dave Stelfox.

I like My Bloody Valentine the most! It's a good thing they stuck to that!"

Moving on to the next band, Ride.

Following their break up in 1996, one member of Ride soon became part of another huge band. Who was it and what was the name of the band?

OASIS! I can't remember who though."

It was Andy Bell, but great job!

And we're on to the final band in the quiz, Chapterhouse.

A member of the band famously had a habit that would be considered annoying to most. Who was it and what behaviour did he exhibit?

I don't know who, but let me guess what the habit was. He liked to fart a lot? Could he have been cracking his knuckles?"

Sorry, nope. The member is Andrew Sherriff, and he used to flip his hair every couple of seconds because his hair kept covering his face.

One final question, this time about the party's honorary DJ, Gary Powell.

Which punk legends did Gary Powell play for during their reunion shows in 2004?

Excellent, you did great. To cap things off, tell us what Fred Perry means to you!

We get such a warm feeling when we think about playing for Fred Perry again. I've always wanted to play at Annexe and now we finally have our chance. It's going to be great!"

Fred Perry Subculture Live is headlined by The Libertines' Gary Powell, who will be supported by Astreal and The Betts. An afterparty has been lined up by our friends at The Council, with sets by Yadin Moha, CATS ON CRACK, Jaime React and Julien Brochard, starting from midnight.

All of this is happening at Esplanade Annexe Studio on October 13th. RSVP for free entry here. Tickets for The Council's afterparty, which cost S$20, can be found here. 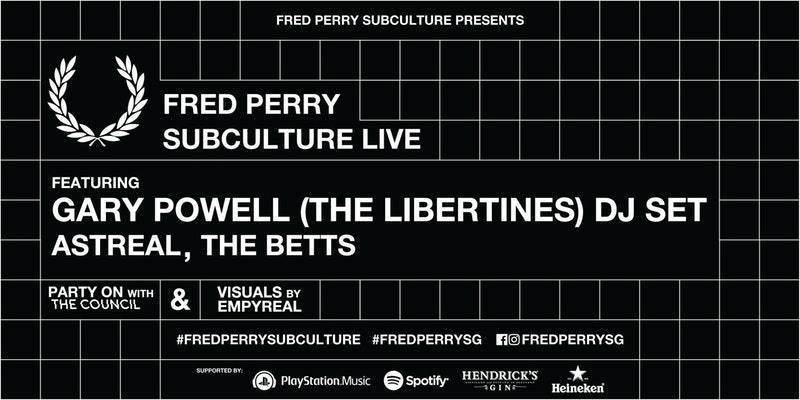 This feature is presented by Fred Perry.