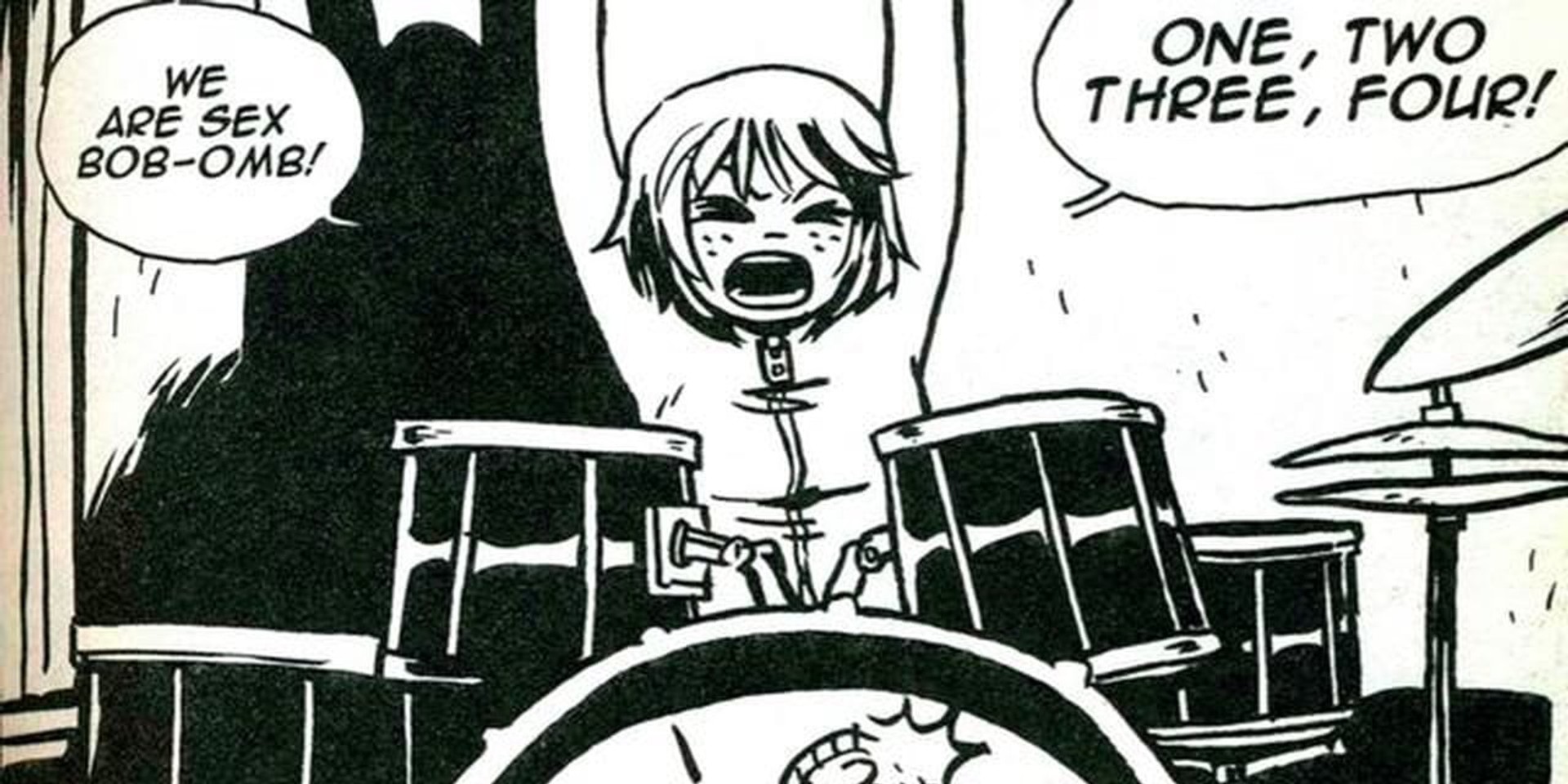 There's plenty of dramatic (and comedic) gold to be mined from band dynamics and the music industry, which probably explains why there are so many invented bands throughout the realm of fiction. From Wild Stallyns in Bill and Ted's Excellent Adventure to Sonic Death Monkey in High Fidelity, we could list down a hundred different examples of fake bands with incredible names.

But instead going through them all, we've decided to filter our favourites by spotlighting the fictional acts with actual releases! And we won't be talking about any old onscreen band with mastered recordings either - the music has to actually be good, and most importantly, original. No covers, no cheating - here are the 10 best real-life songs written for fabricated musical acts.

Fronted by Archie Andrews himself, The Archies were a bubblegum pop band made up of friends Reggie Mantel, Jughead Jones, Betty Cooper and Veronica Lodge. Besides being staples of the long-running comic book (where Josie and The Pussycats also originated), the band were most prominently featured on the cartoon The Archie Show.

Existing from 1968 to 1973, the fictional band achieved several real-life, chart-topping hits, most famously with 'Sugar, Sugar', written by Jeff Barry and Andy Kim. The song went to number one on the pop charts and even captured the top spot on Billboard's annual Hot 100, becoming the only fictional group to ever achieve such an accolade.

Not to be confused with the real Stillwater, who were a Southern rock band from the 70s', this version of Stillwater comes from Cameron Crowe's great semi-autobiographical tale of rock stars on the road in Almost Famous.

Fashioned as mix of Lynryd Skynyrd and Led Zeppelin, Stillwater was so good at mimicking their inspirations that they actually got to be pretty good themselves. 'Fever Dog' was actually written by Cameron Crowe alongside Heart's Nancy Wilson, while actors Billy Crudup and Jason Lee were then taught to perform their material by the great Peter Frampton himself.

Most of you are probably familiar with the hilarious 1984 mockumentary This Is Spinal Tap, which chronicled the twilight years of the hopelessly out-of-touch fictional band Spinal Tap. But did you know that the idea for the band originally came from 1979 ABC TV sketch comedy pilot called The T.V. Show?

Either way, Rob Reiner's facetious creation quickly grew to have a life of its own in the real world, releasing three very real albums, and going on to headline several world tours. Turn your speakers up to 11 when you listen to their signature song 'Tonight I'm Gonna Rock You Tonight'.

The Oneders - 'That Thing You Do!'

Technically this band later changed its name to The Wonders because people kept pronouncing their name as "The Oh-Nee-Ders", but due to pressure from Play-Tone Records (also fictional), we'll be spelling their names as intended.

Set in the summer of 1964, Tom Hanks' film That Thing You Do! told the story of a one-hit wonder rock 'n' roll band which spawned an actual hit song with their eponymous single. The song was actually written by Adam Schlesinger (of Fountains of Wayne) and also features the contributions of Mike Viola on vocals.

Based off the graphic novel series Scott Pilgrim by Bryan Lee O'Malley and later adapted into a super fun live action film by Edgar Wright called Scott Pilgrim vs The World, Sex Bob-Omb was the title character's struggling indie band. Comprising of Stephen Stills, Scott Pilgrim, Kim Pine and Young Neil, the movie incarnation of the band was actually supplemented by original music from Beck!

Their most popular track is called 'We Are Sex Bob-Omb' (not 'Launchpad McQuack' as mentioned by Scott in the graphic novel and film) but we'll be focusing on a deep cut called 'Garbage Truck'. And surprisingly, its a simple albeit catchy lo-fi garage rock anthem that does not make you think about death and get sad and stuff.

The Clash at Demonhead - 'Black Sheep'

A rival band to Sex Bob-Omb also stemming from the Scott Pilgrim franchise, The Clash at Demonhead is actually fronted by Scott's ex-girlfriend Envy Adams (who was also dating Ramona's ex-boyfriend Todd).

The Montreal-based band also had real-life music composed for them by Metric, but intriguingly, the actress portraying Envy, Brie Larson, sang the actual vocals for their hit song 'Black Sheep' instead of Emily Haines.

While Walk Hard: The Dewey Cox Story was indeed a musical biopic poking light-hearted fun at the stylings of Johnny Cash, Bob Dylan, Brian Wilson and many others - its soundtrack was no joke at all. Mostly written by Dan Bern and Mike Viola but performed by John C. Reily himself, there isn't a weak song on the whole thing.

As most critics have already noted, Dewey Cox's songs went beyond folk-rock caricature and could legitimately hold their own as genuinely fine songs in all the genres they were attempting to parody. 'Walk Hard' is simply the most famous track on the OST, but really, you should listen to the whole thing.

The Soronprfbs - 'I Love You All'

Of all the films about fictional bands that we've ever encountered, Frank has to be the most unique. Concerning the unorthodox genius of an enigmatic musician named Frank, a band leader who hides his face beneath a large papier-mâché head at all times (and we mean all times), Lenny Abrahamson's movie is a heartfelt look at the false romanticism between madness and genius.

All the music for Frank's The Soronprfbs was composed by Stephen Rennicks, but since none of the performances in the film were mimed, most of the actors (except Carla Azar who is already a professional drummer with Autolux and Jack White's band) had to learn to actually play their instruments. In particular, Michael Fassbender's vocal performance for this climatic piece was especially affecting.

Black Canary - 'Fish Out Of Water'

In current DC Comics continuity, the superhero Black Canary spends her non-crime-fighting time as the the lead singer of her own band (also called Black Canary). So as a supplement to the ongoing monthly series, the creators figured it would cool have their fictional band jump straight from page to Bandcamp by releasing a very real three-track EP, and guess what, it was pretty darn cool!

What could have been a cute but meaningless gimmick tie-in turned out to be so much more because Black Canary's actual release turned out to way better than anyone expected. Their opening track 'Fish Out Of Water' is the EP's highlight and its music is co-written by Black Canary scribe Brenden Fletcher alongside Caveboy lead vocalist/guitarist Michelle Bensimon and producer Joseph Donovan.

Literally all the songs written for the Empire TV series could be legitimate Top 40 hits because Timbaland (the show's resident producer) is so good at latching on to the commercial hip-hop cliches from the 2010s. The man could make a modern hip-hop hit in his sleep and he's churning them out at a factory rate for a TV show no less.

Whether that speaks more to the quality of music on Empire or the lack of originality on the Top 40 charts is a matter for debate, but what isn't debatable, is that 'Drip Drop' is catchy as hell. Produced in collaboration between Timbaland and fellow Philly producer Justin Bostwick, Hakeem Lyon's breakout track is an undeniable earworm.