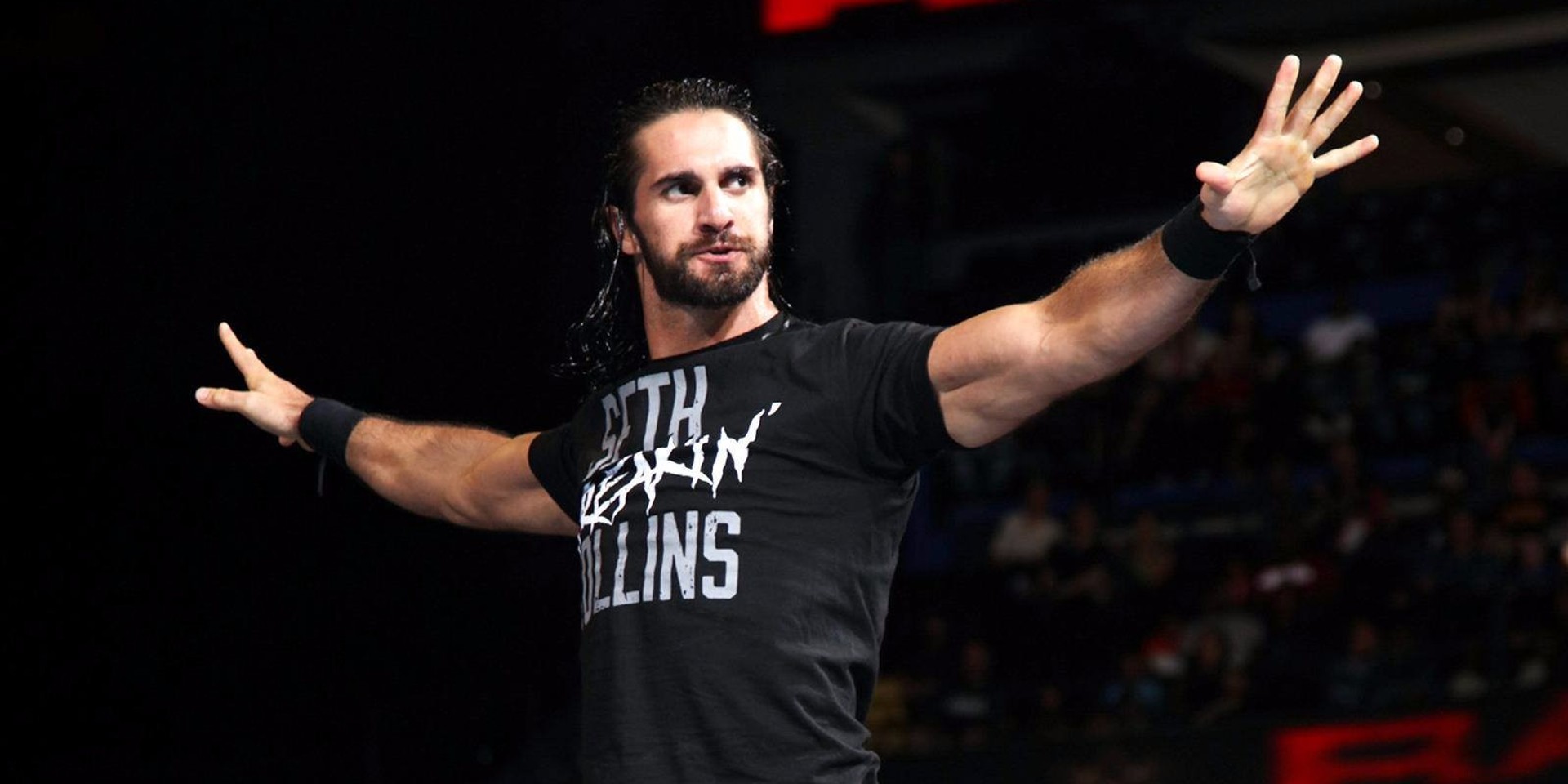 At only 31 years-old, World Wrestling Entertainment (WWE) Superstar Seth Rollins (real name Colby Lopez) is relatively young for how much he's accomplished in the business. Even as a blooming pro wrestler (then going by the moniker Tyler Black), cutting his teeth in the independent circuit, Seth found himself quickly rising to the top nearly every promotion he's stepped foot in.

When FCW was rebranded into NXT, it was Seth Rollins once again that became the promotion's inaugural NXT Champion. After moving up to the main roster, Seth was teamed-up fellow fresh-faced signees Dean Ambrose and Roman Reigns to form a dominant new stable called The Shield. It was during this period that mainstream audiences became enthralled with Seth's relentless work-rate and daredevil style.

After betraying The Shield and breaking out into a heel solo run, Seth Rollins became a singles world champion once again. But this wasn't any world championship - this was the WWE World Championship - the grandest accolade a pro wrestler could be bestowed in the modern era. In fact, his Money In The Bank cash-in at Wrestlemania 31 (to earn the title) will likely go down one of the most memorable Wrestlemania moments ever.

Despite that swift climb, Rollins' momentum has been hampered in recent years due to a string of serious (real-life) knee injuries. Nevertheless, the fan-favourite superstar is thankfully healthy once again, and looking to reclaim his place at the top. And judging by how well management has been booking him since his return, we reckon that it won't be too long before the big prize is his once again.

Seth Rollins will be in Singapore with his RAW cohorts for a WWE Live house show on Wednesday, 28 June (get your tickets here). Ahead of The Kingslayer's impending arrival, we spoke to Seth over the phone to talk a little bit about his career and how his various theme songs have informed his character through the years.

Hey Seth! I believe the first one you’ve ever used was 'American Love' by Haste the Day way back in IWA Mid-South. What can you tell me about that?

Haste the Day is actually a Christian rock band from Indianapolis, Indiana. I’m not a huge uh... I’m not a very religious person but I love the song – I thought it was very melodic but also very heavy. The reason I wanted to use it specifically for that show is because at the time I was doing a character during my entrance I kinda slam danced around the entry way and stuff like that. It had a really good breakdown so if you get on YouTube and search "Tyler Black dancing" I’m sure you’ll find videos of me looking like a goof ball at 19 years old. It’s a beautiful song, the band’s great – they got a lot of great records out.

Outside the WWE I think most fans are most familiar with your ROH theme 'The Haunted' by a band called, funnily enough, Walls of Jericho.

Oh yeah 'The Haunted' man. That fit perfectly with what we were doing with Ring of Honour and Age of The Fall – the lyrics just dead on. It was just super gnarly. I thought it was very appropriate for what we were doing – the group that we were, the outsiders that we sort of were. It had a really haunting beginning I remember. My partner at the time, Jimmy Jacobs – he doesn’t listen to that kind of music at all, so he was kinda skeptical about it at first but I think once we got a rhythm to it, he kinda got into it as well. But yeah that song’s a killer too man.

Upon getting signed by the WWE, you started out with 'Battle On' by War of Ages, back when you were in developmental.

'Battle On'! I was actually able to use it in Ring of Honour a little bit too. And for a short period of time I used it in FCW when I first got to WWE. It’s really just an epic song, it’s got some incredible riffs on there – War of Ages is a band that’s good friends with me and they were kind enough to let me use the song. I just thought I had a really awesome opening riffs and a great entry point for me to come through the curtain and make my way. That’s actually a great song. One of those I kinda forget about sometimes.

Why did you change it to 'Flesh It Out' by Blues Saraceno when you got NXT?

Yeah... y’know, once you got to NXT and WWE, you start worrying about licensing agreements and lawsuits and stuff. You kinda gotta get music that’s not copywritten. They had me go through a list of songs that had fit my character and that 'Flesh It Out' kinda just worked the best for me. It served me well during the time in NXT.

When you moved up to the main roster 'Special Op' was The Shield's tune for many years. I think that's still the most iconic theme you've used till this day.

Well that song definitely has a special place in my heart, obviously. It’s my first entrance theme on the WWE main roster. We also got to record the beginning to that, the "Sierra Hotel Indie Echo Lima Delta - Shield" ourselves. Me, Roman Reigns and Dean Ambrose sat in a room and did those call signs. That was pretty cool.

It was composed by Jim Johnston – who’s a legendary music maker for WWE. Shawn Michaels, Stone Cold Steve Austin, The Rock - he did all the best ones ever, so he kinda picks and chooses who he wants to work with nowadays and The Shield was his special project. He really nailed it on the head with this one. That song, Roman still kinda uses a version of it. I still miss it though, with our entrance through the crowd.

I think that brings me to your current song, which is called 'The Second Coming'. You’ve been using it for about two to three years now. How is it fitting with you?

Yeah I love it. It’s one of those where soon as the riff kicks in, everyone knows who’s coming through the curtains. That’s all that really matters when you’re picking an entrance theme. It fits my character. Though it was really weird adjusting to it at first because the pace of it is different from The Shield music, so y’know, trying to get the timing down on the entrance and making it feel like my own song took a little while.

I’ve always wondered – if you could use any song ever, licensing aside – what would it be?

Any song ever is a pretty vast range of difficult choices.

I guess, what fits your character the best.

There’re some incredible songs – who doesn’t wanna come out to 'Welcome to the Jungle' by Guns and Roses? There’s a lot of options. For me, if I were to pick a perfect theme song, it’d be the song by Parkway Drive called 'Wild Eyes'. It’s a really fantastic song, it’s got a good rhythm to it, I think it would work really well as an entrance theme.

I know you guys tour a lot and you’re in a lot of cars, and a lot of planes – what do you listen to to pass the time while you’re touring?

I kinda mix it up a little bit. Usually when I’m on the road just traveling I listen to more chill music. When I’m working out I got my heavy jams going.

For me I like more relaxed stuff when I’m just on the road or on airplanes or whatever. Bands like The Wonder Years, Mayday Parade, Paris, Neck Deep, State Champs – a lot of pop punk music – A Day to Remember, some of their lighter stuff. Just stuff that’s a little more chill, a little more mellow, a little sing-songy, just get stuck in my head - something that doesn’t get me worked up too much.

On the current roster, if there’s one particular entrance that you could take for yourself, who would it be?

I think Bray Wyatt has a really awesome entrance - has an epic entrance. Shinsuke Nakamura has a really cool entrance too, and a cool theme song. But I just like Bray’s – the phones, the black out, with the fireflies in the crowd, it looks really cool. And he’s got that great creepy little music and he kinda gets to walk to the ring super slow, which is really awesome. Really one of my favourites.

What about of all-time? When you were watching wrestling as a kid growing up, what was the entrance which you wished you could emulate?

The Undertaker. For sure. If anyone tells you anything different they’re lying. The Undertaker’s got the best wrestling entrance in the history of our industry. He’s the dude, man. He’s the benchmark when it comes to entrances.

This kind of outside of my the questions I planned to ask you. But you’ve got the chance to wrestle him before he retired. What was the experience like being in the ring with The Undertaker?

Yeah, I got into step into the ring with the Undertaker one time before he retired – it was a six-man tag match on Monday Night RAW in London. It was one of those nights I didn’t really get to fully grasp what we were doing. We had a show earlier in the day in Cardiff, Wales – and we took a helicopter to London! I had to basically get right into the ring and have a second match within a few hours.

It was against Undertaker, Daniel Bryan and Kane though – so it was a tremendous experience. I remember looking across the ring at one point, locking eyes with a dead man – someone who’s an absolute legend, first ballot Hall-Of-Famer, one of the most incredible performers in the history of our industry. To share a ring with him is very surreal, especially considering our age difference.

At some point, you’d consider that he’d be retired before you’d get the chance to be in the ring with him, but that’s just a testament to how he took care of himself and how physically forward-thinking he was in keeping himself healthy that late in his career.