In a move that's puzzling despite its controversial cancellation here this year over permits, Future Music Festival has canned all future dates in Australia. In a Facebook post addressed to its 500,000+ followers, they cite financial challenges over setting up any more future festival editions. 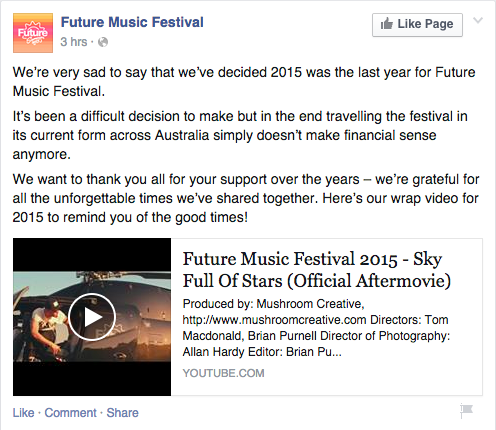 While news about hospitalisations and drug busts did pervade its Sydney leg, it seemed as if this year's edition was by all accounts successful — judging from Future Music Festival's wrap video, of course. An additional media release by The Mushroom Group, who were responsible for bringing Future into Australia, has revealed in an article by Triple J:

"Despite the considerable critical acclaim of the 2015 festival, the last two years of ticket sales for the festival have underperformed, meaning Future Music Festival will not be returning in 2016."

"Mushroom Group share the belief expressed by a number of promoters globally that the day of the large scale travelling festival in its current form is unfortunately numbered."

Future Music Festival attempted to continue its venture into Asia this year after 2014's unfortunate drug deaths in Kuala Lumpur, which resulted in promoters Livescape Asia targeting Singapore for 2015.

This news follows Miami EDM powerhouse Ultra Music Festival's announcement where they've revealed a 2016 edition in Singapore. Whether Ultra will be able to go through with it remains to be seen.

UPDATE: It looks like we won't see any action from Future Music Festival Asia as well, although they've hinted at another event under a new name. They've posted their full statement on their Facebook page.

"While the sun sets and we say goodbye to Future Music Festival Asia, know this. A new dawn will arise. As our Founders said today, "One chapter of the book is closed, 772 chapters to go". See you all in March next year."

Here is the wrap video for Future Music Festival's 2015 edition, which sadly had no Singapore inside.