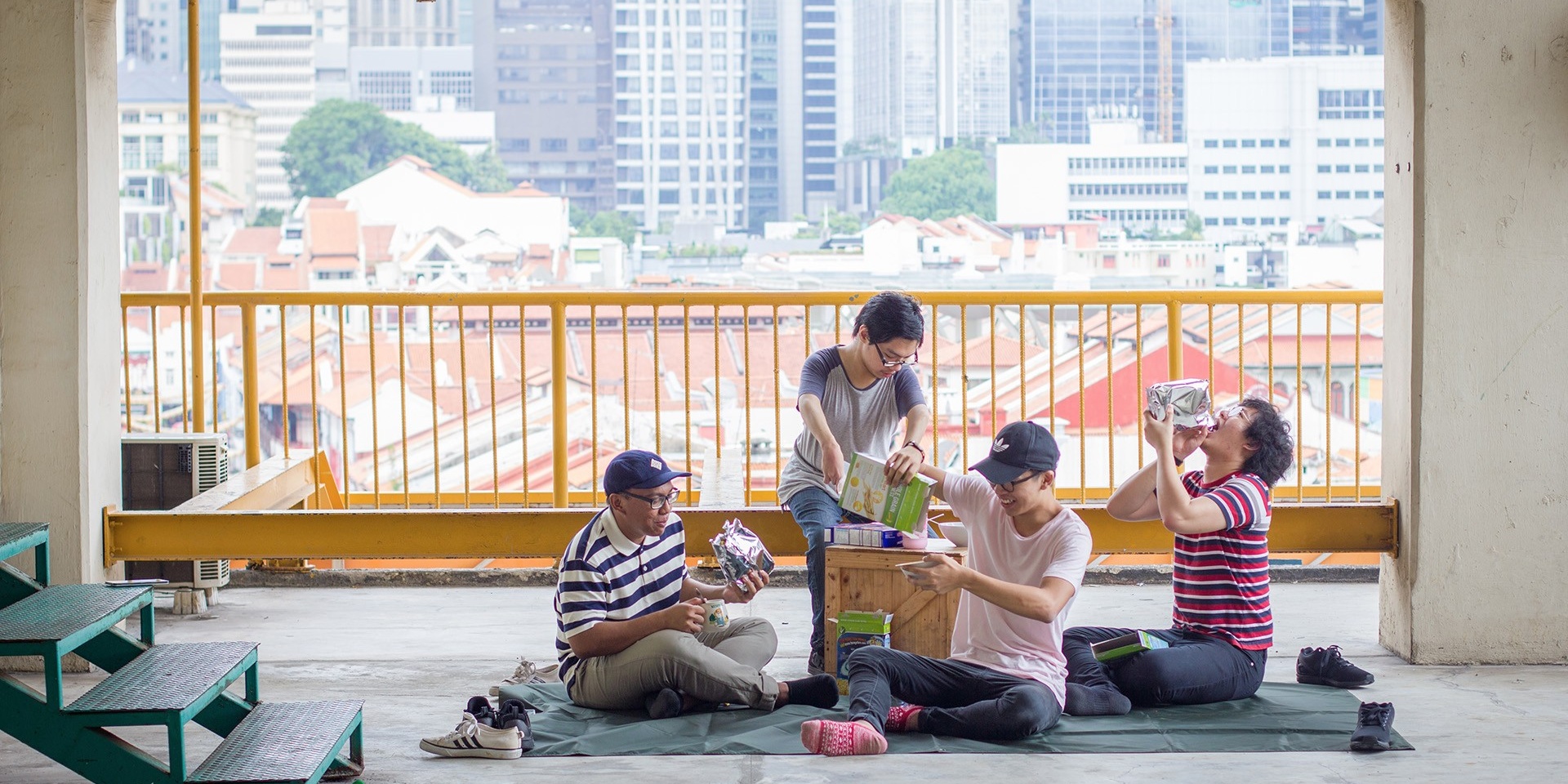 FXTRT are fun to talk to, as if their music isn't enough indication.

Running on the motto of being "serious about our not-so-serious music", the band — comprised of Kadir on vocals and guitar, Ming on guitars, Jack on bass, and James on drums — are quite the peculiar quartet. Their debut release Palette was a noticeable, if uneven, effort – a far cry from the sparkling consistency of Bento Set A.

Speaking to the band about their progression revealed more about themselves than we expected – or, perhaps, that's just how the band operates in nature. Their music is wholesomely inviting and engaging, and as people, they're refreshingly unguarded.

They're also really close to each other – they complete each other’s sentences, and the sheer amount of inside jokes – of which I was privy to – threatened to veer us off-topic more times than you can imagine. Not that I'm complaining.

It's easy to not take things seriously, but to translate that into your music with a degree of enjoyable musicianship is a skill FXTRT are building towards. From their vibrant, positive outlook on life to the bright pastel colours of their artwork – along with the endless food references – Bento Set A is deeply immersed in a joie de vivre Singapore so sorely needs.

The band has humble roots: it was formed originally as a patchwork of friends who coalesced with stronger ideas when they took the same course in Republic Polytechnic.

Ming shares: “I met Jack for the first time when we were Sec 2. We were all NPCC kids. We met on the jetty after a camp. Fast forward a few years later, the rest of us are all in this course in RP called Sonic Arts. In Year 1, we were all in the same class. Me and James we had a thing.” Kadir joined the fold after 2014’s 100 Bands festival. “After that we had a few jams. We jammed at Soundexpedia to get the sound going lah. The general direction was really indie rock.”

The band was then quick to put original material out: “We continued writing, then we did our first EP, Palette. It was more indie rock than anything else. Listen to 'Districts' [off Palette] and you’ll know what kind of indie rock – like indie rock and power pop.”

Not all bands are always comfortable with the music they put out the earliest – such was the case with FXTRT’s debut release, which didn’t really speak the way the band wanted it to. This exchange between Ming and Kadir sums it up.

K: "Felt like we wanted to make something that was nice to play, easy to play."

K: "For me, the first ever math pop/math rock – local math rock band – I heard was Forests. I felt that Forests was really damn good."

K: "That’s where I started to feel - let’s play something that’s nice to hear and nice to play. In a way, I think we can all agree is that we won’t get tired of our [current] playing. It won’t get repetitive."

The band was bolstered even further by their individual musical inspirations, ranging from indie rock group Algernon Cadwallader to visual kei icons X Japan, with fusion acts CHON and Guthrie Govan in between for good measure.

Finding a new groove with math-y influences, the band set to work on their sophomore release, Bento Set A, which includes a full instrumental track, as well as a copious amount of solos, characteristic of the genre. 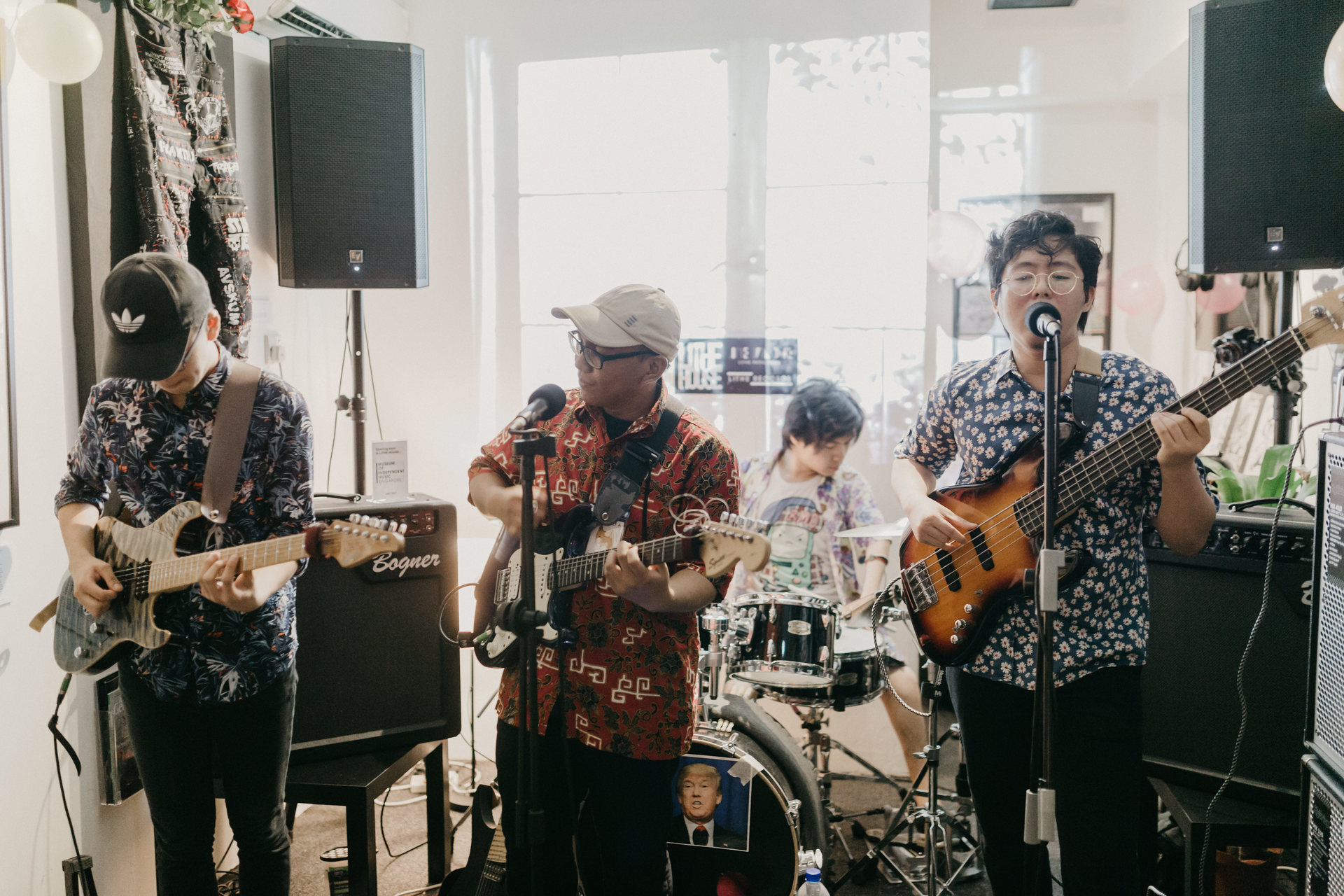 Even on the songwriting front, there's a quirkiness and comfort that belies a wit and sense of imagination. “Some elements are drawn from our own experiences," Kadir says.

"Most of it is not like, ‘eh today I experienced this train breakdown, and saw this pretty girl… let’s write about the girl.' Rather it’s... 'what if there’s actually a smurf stopping the train and its wheels? What if suddenly there’s just one fat dude sitting in front and the train stopped because of that?’ That’s our take on things.”

Most of it is not like, ‘eh today I experienced this train breakdown, and saw this pretty girl… let’s write about the girl.' Rather it’s... 'what if there’s actually a smurf stopping the train and its wheels? What if suddenly there’s just one fat dude sitting in front and the train stopped because of that?’ That’s our take on things.”

Their single, ‘Elephant’, is apparently the prediction of the unfortunate shooting of Cincinnati Zoo gorilla Harambe, as Ming shares that the story of the song pretty much predicts Harambe two years before it actually happened (#RIPHarambe).

But this jovial, spontaneous songwriting style is a far cry from the meticulous methods they employ during the recording process. Ming emphatically declares: “We are entirely self-funded, actually. We are actually DIY all the way.”

Indeed, all the recording was done in what the band calls the “Ming Cave” – Ming’s house, basically. This home studio played host to the band’s multiple attempts at recording, mixing, and mastering the three-track Bento Set A, which went through an unspeakable amount of mixes until the band reached a point of satisfaction.

Furthermore, it’s worth noting that the drums on Bento Set A were entirely programmed and EQ-ed, forgoing the live drum treatment entirely. "I [did it] myself," James says. "I programmed the drumset. [We did it this way because] one, it’s expensive. Second, no time and no space.” You wouldn't do a double-take listening to the EP – bland and dry MIDI sounds are treated with such care that it evokes the vigor of live drums, without the woeful financial cost for the young musicians.

FXTRT's ability to play straight to the heart is also encapsulated in their performance of the song 'Maggie', which they performed at their EP release last Friday (30/06). FXTRT can indeed keep a mean groove, and they really care about the kind of music they make.

"We don't take ourselves too seriously lah," Kadir says. "We’re quite serious about our not-so-serious music. That’s our slogan. We really take care of our craft. [We had] like 17 different mixes in one week.” 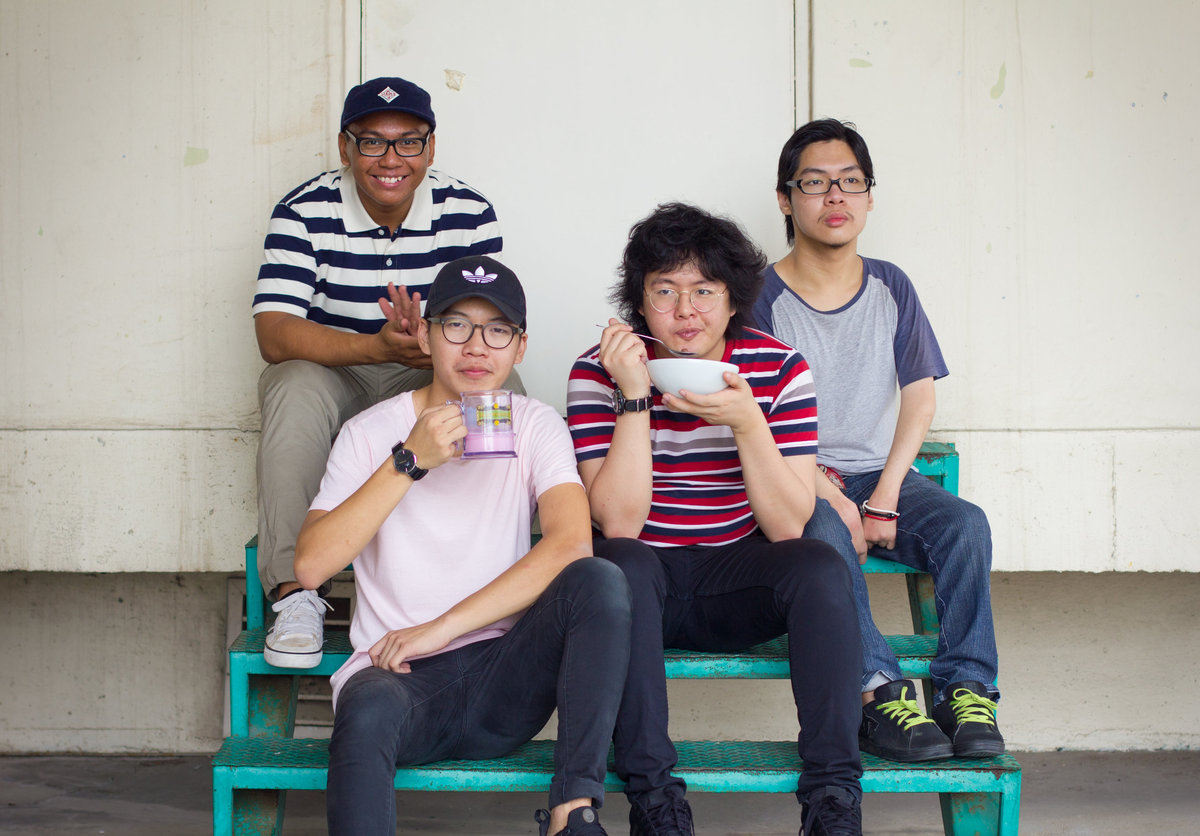 We’re quite serious about our not-so-serious music. That’s our slogan. We really take care of our craft. [We had] like 17 different mixes in one week."

– Kadir, on the band's sonic discipline.

These 17 mixes often only had minor tweaks made to them across mixes. "That actually happened," Ming demonstrates. "This part, up a bit more only. Compress a bit more. A bit more reverb.”

As serious purveyors of not-so-serious music, they have big dreams – hoping to play Tokyo's Summer Sonic festival one day, because everyone in the band loves anything and everything to do with Japan. “Except the occupation”, adds Kadir.

FXTRT may not be the serious emotional respite you may want, but they're the fun, assertive companions you need. This band is all about the smurf pushing back against a train, injecting whimsy into the mundane. They're playful with their escapism – toeing the line separating acceptance and delusion – but are dead serious about giving a fun time.

With their numerous food references (a plus for our food-conscious populace) and an endless stream of joyful melodies, they've locked into something special. Let's hope they keep it into full gear for the years to come.