Words by timwee
Photography by All Is Amazing, Aloysius Lim, Alvin Ho

“Music washes away from the soul the dust of everyday life.” Berthold Auerbach

Fresh from a national day of mourning for their MH17 victims, Kuala Lumpur (KL) was not exactly party central last Saturday. Reeling from the unexpected tragedy, black MH17 ribbons were still visibly worn throughout the nation. And once again, as illustrated in the opening quote, it was left to the Good Vibes Festival organizers to showcase the healing power of music.

Held at the Sepang track, did the electro-pop heavy musical event live up to the task? We will let you, the reader, decide as we pay tribute with 17 things good, bad and everything in-between about the Good Vibes Festival. 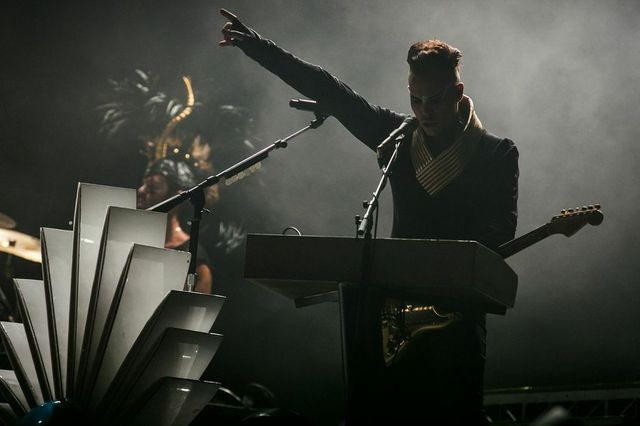 Rays of (Empire of) the Sun

Though over an hour late, Emperor Luke Steele, all decked out in his eye catching regalia, brought a much needed warmth to the cold cold night. Complete with his entourage of dancers and band members, the Emperor, donning a hell of a bling crown, unleashed a mesmerizing spectacle complete with neon-lit instruments.

Obviously sparing no expense, Empire of the Sun was truly a festival band to be ‘Celebrate’(d) with their dynamic danceable beats, flamboyant visuals and outrageous costumes. Such was their impact that Steele and co left the crowd either stunned in awe or breaking out in hysterical dance; it was like ‘Walking on a Dream’. Ending off with a bang, the Emperor smashed his six-stringed sceptre to smithereens despite us wanting more. Easily our pick of the festival, this was a performance that really brought made the audience feel ‘Alive’. 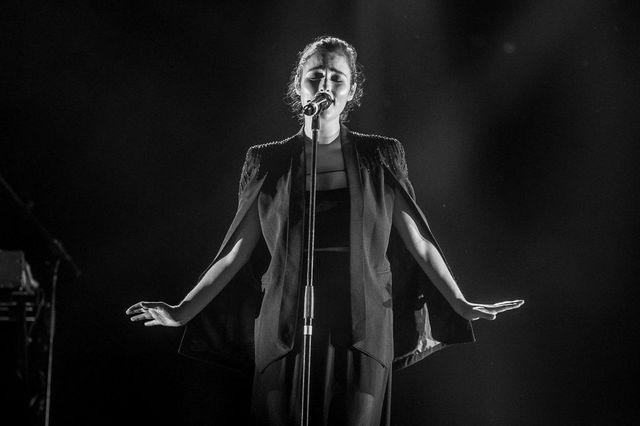 Banking on the Goddess, BANKS

Dressed in her signature “moody” attire, 26 year-old American singer-songwriter Jillian Banks saunter around onstage like a powerful witch goddess. Revealing her sensitive soul, BANKS bewitched her audience with her expressive voice during the acoustic rendition of ‘Warm Water’. With an album due in two weeks, the psych graduate thanked her assembled crowd for braving the rain. Launching into her most “empowering” track ‘Goddess’, BANKS’ soulful performance certainly justified the hype that had been building up around her. With self-professed celebrity fans like Ellie Goulding, we have definitely earmarked the sultry songstress as an artist to watch out for. While it seemed a pity at times for such a talented voice to be hidden under layers of effects (evident during the song, ‘Changes’), BANKS’ performance certainly made our list as the second highlight of the night. 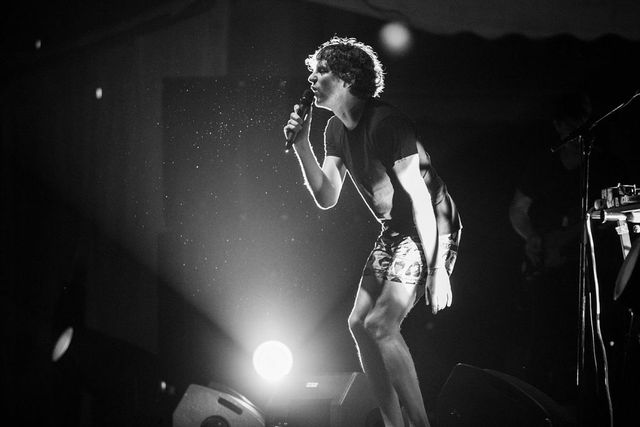 With a name that wouldn't be out of place on a Happy Monday record, !!! certainly channelled the wa-wa sound of the Mancunian group; albeit with a better vocalist at the helm. While it may have been their maiden Asian performance, mad props to frontman Nic Offer (who showed us how mud can be our friend) as he launched himself and the mic stand headfirst into the ground for an unforgettable finish. Respect dude, respect…

While the festival did feel like an underage keg party (obviously, majority of the festival goers were of the hipster persuasion), it was nice to see families members of all ages united in music. From stroller pushing mothers to middle aged dads with teenagers in toll, it was a sight to behold. 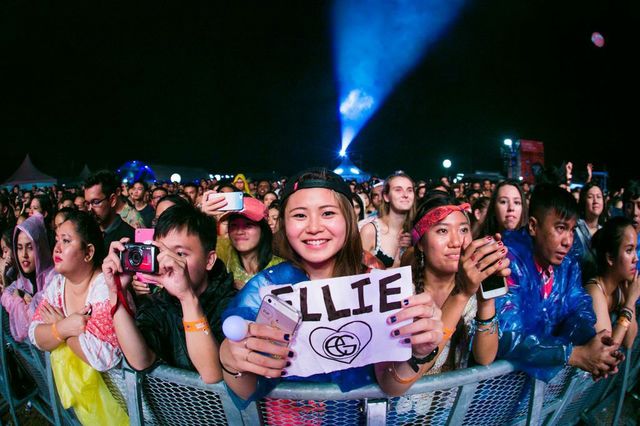 Catch You on the Flip Side

Having packed for a summer festival, the unexpected downpour left many pairs of shoes caked in mud. But, that wasn't the worst case scenario with many flip flops being lost as casualty of the mud.  Many noble flip flops met their end as they went into the gooey mud sludge, and never made it out intact.

So having lost our flip flops, we were forced to resort to the trusty paper thin hotel slippers. Though sad for our fallen Havaianas, our feet were so comfortable that it felt like wearing nothing at all. This could be the start of a new Fall fashion trend y’all! So remember, you heard it first on Bandwagon.

With Sepang a fair distance away from any residential area, we spotted some zealous festival goers who were brave (or foolish, depending on how you look at it) enough to peddle their way to Good Vibes. While we could barely walk after the draining festival experience, we are certainly tipping our hat to these green environmentalists.

Usually a five-piece rock n’ roll band, this was the first time that we heard the Malaysian band Kyoto Protocol behind the DJ decks. Aiming to educate audiences on the 50s’ rock n’ roll sound through to 70s’ disco, their retro mixtape seemed to cut no ice with the small crowd. It was a scene that was right out of Zouk’s Mambo Nights, sans the maddening crowds. Despite egging the audience to groove with inflatable guitars, the only time the covered arena was filled was when festival goers were seeking shelter from the heavy storm.

Music on the Go

Adding new meaning to the expression, music on wheels; Red Bull Malaysia rocked a pimping ride with a mobile DJ deck mounted to an open-top off roader. The mobile music station was a hit as it travelled around the festival ground early on in the going. However, it proved to be quite the nuisance during the headlining sets as it distracted fans with pulsating beats. 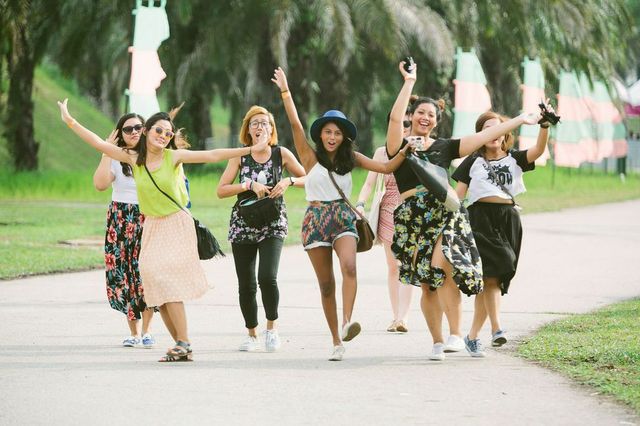 Presenting the interesting concept of converting any space into a silent disco arena; the Silent Discotek tent had everything that a nightclub should have, but with a twist. Covered in funky disco lights, the tent was hushed with silence as the music was delivered via portable headphones. With two DJs playing simultaneously, party goers could choose their musical poison of choice.  While we weren’t too sure if the Silent Discotek had the quintessential club vibes, it sure was jarring to be able to have a crystal clear conversation at a ‘club’.

With the ALS ice bucket challenge going viral worldwide, we were not too surprised to see a water dunk station on the festival grounds. Though not exactly filled with ice cold water, people were still freezing their ass off, after getting dunked, thanks to the chilling winds.

With the chances of getting wet alarmingly high during Good Vibes, the GAP pop-up store was a sight for sore eyes. Not only providing the crowd with a range of festival wear, the kind GAP team was also handing out free popsicles and festival kits for Good Vibes survival. 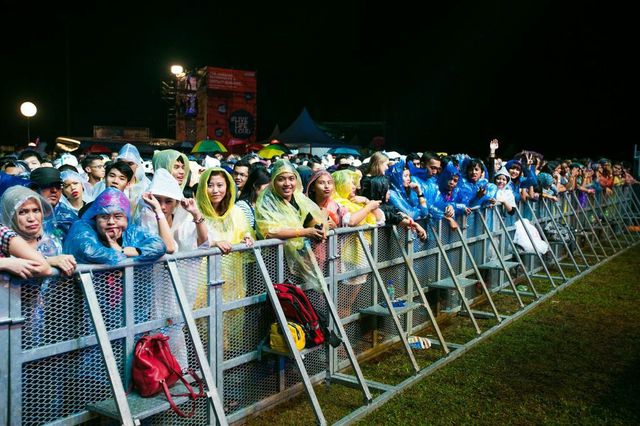 Ladies and gentlemen, the extremely quotable Forrest Gump with the local KL weather update, “It started raining, and it didn't quit… We been through every kind of rain there is. Little bitty stingin' rain... and big ol' fat rain. Rain that flew in sideways. And sometimes rain even seemed to come straight up from underneath. Shoot, it even rained at night...”

If that didn’t put a damper on proceedings, then the fact that there were no ponchos on sales certainly did.

Channelling the Glastonbury vibes, the Sepang track resembled a mud mosh pit after the torrential downpour. Festival goers were struggling across sloppy mud trail that were as slippery as ice; though those brought pool floats were now seen as geniuses. While some had the foresight to come in wellies, many punters had to suffer the indignity of broken flip flops as they sank into the quicksand mud fields.

With the rain starting in the early evening, much of the local bands were denied their 15 seconds of fame as the main stages were forced to shut down; casualties of the weather includes Malaysia’s +2DB, Bittersweet, Paperplane Pursuit and our very own Electrico. Fearful of a festival cancellation, we were glad that the rain did stop for the festival headliners to carry on.

Though repeatedly warned about exorbitant KL taxi charges, it has been our good fortune that we have never been ripped off while in the Malaysian capital; that is until the Good Vibes Festival. Heading down to the trusty mytaxi booth, we were horrified to learn that a 15 min journey was going to set us back a ridiculous RM$55.

As frequent KL travellers (and having used the mytaxi app there), we were certainly loss for words. For shame, for shame mytaxi; you have let us down. 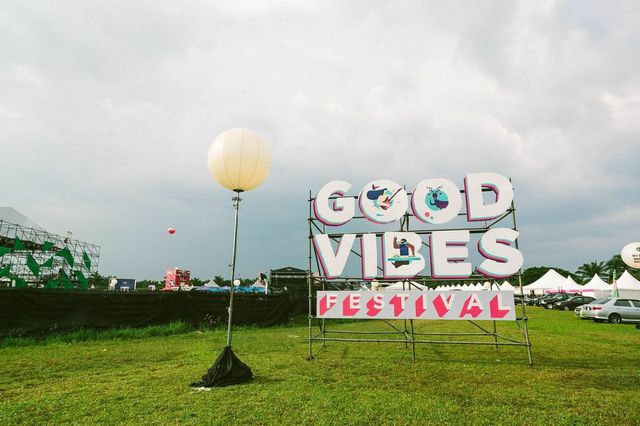 Us: Hi, what do you have on the alcoholic drinks menu? 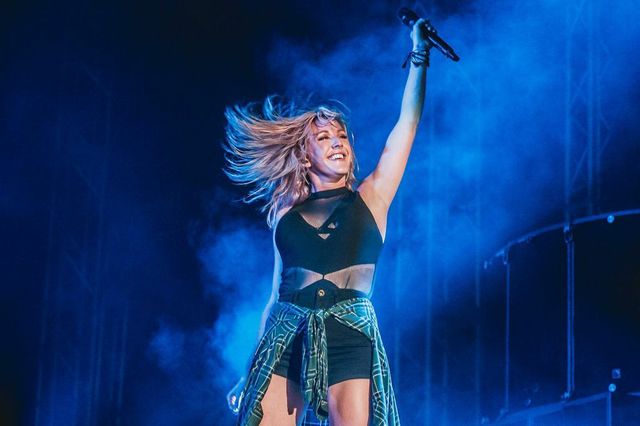 Pot of Gould(ing) at the end of the rainbow; Not!

In what was an underwhelming festival finale, Ellie Goulding’s maiden Malaysian showing fell surprisingly flat. Perhaps, it was a tall order to top the spectacle that was Empire of the Sun. But, the British singer certainly didn’t bring her A game with a performance that seemed more ‘going through the motions’ than inspired.

Sure, Goulding was animated and physical on stage; jumping around displaying her Shakira inspired moves to the roaring crowd. But, she never ventured far from her vocal comfort zone. Belting her hits like-for-like off her albums, we could have sworn that we were listening to a synthesized Britney Spears performance (no, it isn’t a compliment) at one point. The final nail in the coffin, in our opinion, was when Goulding delivered the patronizing “I’m glad to be here” line in a rather monotone voice. If this was the best she could offer as a sincere showing, we would hate to see what she considers a poor show.

But to be fair, there was an up-side to Goulding’s set. Her intriguing visuals proved to be an adequate distraction from our rooted disappointment. However, it most certainly didn’t work for all as we spied a couple of girls dozing off at the Heineken lounge; despite being in full view of main stage.