"How are you Mr Terrapin/ Is there anywhere you've never been?/ Take me with you, teach me how to swim"

I was getting serenaded by Ellipsis, outside a sex shop in Orchard Plaza. Odd as it may seem, despite the silly lyrics the song about terrapins, an Ellipsis original, it had all the sentimentalities of a love song. 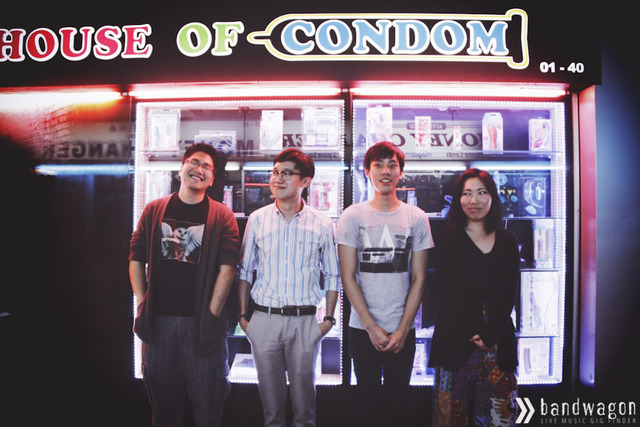 We work at Orchard Plaza - chockfull of money changers (the best in Singapore apparently), ready-in-six-hours suit makers and… sex shops. And though this is the case, we have never stepped into any of these profitable chains, that is until Ellipsis decided to drop by our headquarters. What resulted was a whole lot of curious fascination, smart quips, and also getting to know the band on a more um, intimate level.

Ellipsis is Soh Zhengping on vocals and guitar, Jowell Tan the guitarist, Yen Hui on drums and Japheth Ng the bassist and occasional vocalist. Last week at Marina Promontory, Ellipsis played to the biggest crowd they have ever played to at the Guinness Arthur's Day showcase with Colorado band, The Fray but around 8.30PM on a weekday, Yen Hui is telling the group a certain news report about a lady who had passed out from overusing her vibrator. Minutes later, Jowell shoves a questionable toy to Yen Hui exclaiming, “Here, one time you can be the man!” Amid the laughter and friendly bicker, we realised that being stuck in the usually intimidating shop with this bunch was going to be a lot of fun.

We shift awkwardly around the shoebox sized store, ooh-ing and aah-ing at paraphernalia while the band also introduced themselves. The not so conducive interview environment of the sex shop meant that it was distracting the band from answering questions. “Oh my god this thing is $75!” Jowell says warily handling a shiny package. Clearly it is time for a cigarette break. 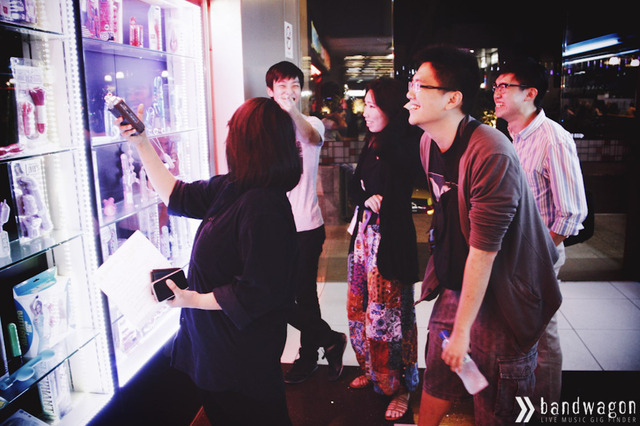 Elements of their comedy rock days are still evident, from their most popular song 'Padawan' which was actually written by the original member of Ellipsis. The band still hold their comedic moments but have definitely taken it out from the songwriting process. “Recently Japheth found a video on YouTube on how to do ambient guitars and now he wants to do ambient bass,” Jowell quips. Yen Hui lets in that it’s usually Jowell and Zhengping that grounds the band when they get too carried away. 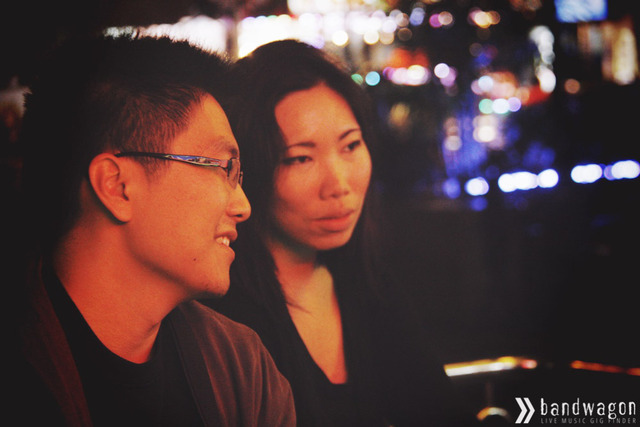 "GO WITH THE FLOW"

Things were happening fast for the band since the launch of the ‘Padawan’ single at Hood Bar. They were invited to play at the weekly Home Club showcase Identite within the same week, getting interviewed on radio and scored a place into the final selection of bands that would open for The Fray on Guiness Arthur's Day - which they went to eventually win. “We were just going with the flow so we didn’t expect anything,” Japheth says. “But Zhengping said must win!” Jowell added. When the winner for their round was announced the band were actually having a cigarette break, just happy and relieved that they had completed another performance.

"Zhenping's the Mastermind," Japheth says as the rest of the band openly agree. Although he writes most of the stuff, the creating music process is very much collaborative. "These guys are very much into the post-rock thing and the stuff I write on my own is very skewered to what I like but in the studio, it is where I like to have as much input as I can from the band. I'm really excited to blend different things like psychedelic and post-rock into our music," Zhengping says. 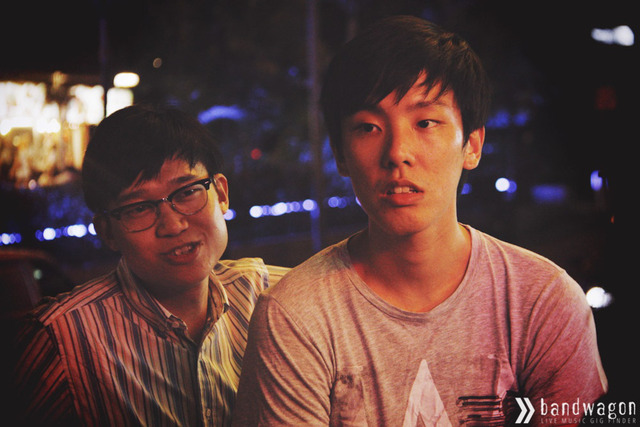 The diverse musical preferences have definitely contributed to the distinct sound of Ellipsis. One listen and you might pass it off as ‘indie rock’ but listen closer and you hear the walking bass lines, the cinematic post-rock element and the drums that keep it all grounded. The Fray has also commended their musical stylings and had handpicked them specially to open because they had “a unique sound.” We assumed the meeting with The Fray went well as the Colorado dudes also went on to discuss the consumption of chilli crabs.

Opening for The Fray was the biggest show Ellipsis had done so far. Besides meeting the band and exchanging some words, it was definitely a watershed moment for Ellipsis. “The crowd was fantastic and there were many valuable lessons we took away from watching the band perform live,” the band stated. Hopefully it won’t be the biggest one yet for this affable band as we’ll definitely be keeping tabs on them and their future shows. 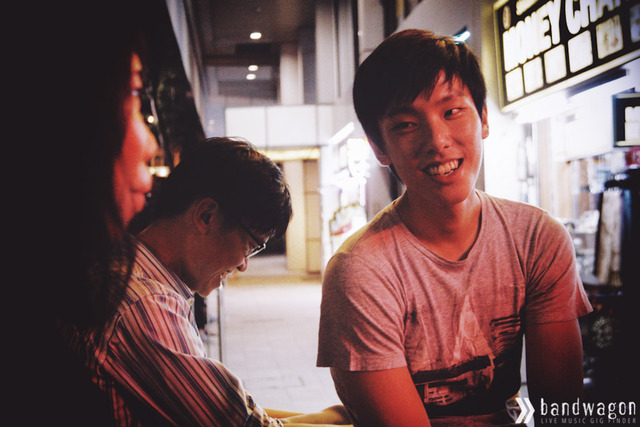 We ended the night discussing music we listened to and liked and as every conversation to exist, the topic of pop music and guilty pleasure music will surface. Before we indulged too much in the days of Aaron Carter and Backstreet Boys, Zhengping, the voice of reason said, “Pop songs have melodies and hooks which I try to use in my music as well, just that we do it in a more rock way.”

Surprisingly, their knowledge of cheesy music was more than extensive and even The Rasmus managed to pop out as a point of discussion. Jowell even reveals that the first song he ever played on guitar was ‘Papercut’ by Linkin Park. With different preferences in music, we asked where we could find all of them at a gig. “We were at I Am David Sparkle and This Will Destroy You. For Baybeats we really liked Asian Chairshot,” Yen Hui says.

Radiohead: ‘Yes’ all around, but Jowell said he wouldn’t.
Muse: The same, again Jowell declines. The band shouts at him.
Britney Spears: Yen says ‘yes’ and the boys say they’d rather see Justin Timberlake. Still no unanimous decision.
Foo Fighters: They started grumbling about the cancelled gig that was supposed to happen at the Padang.
Backstreet Boys and N*SYNC Megatour: “That one I will I go,” says everyone. Finally, an agreement. 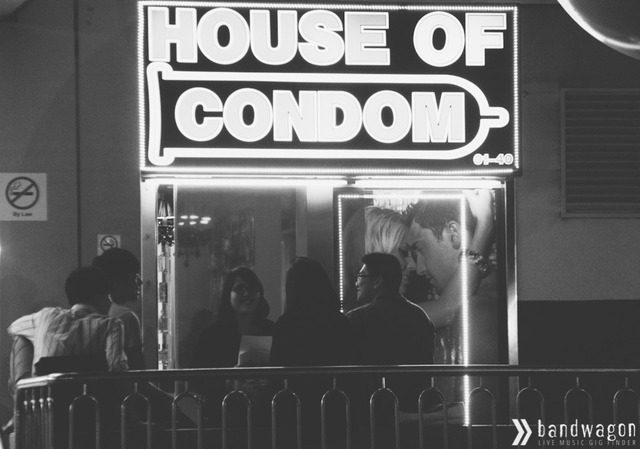