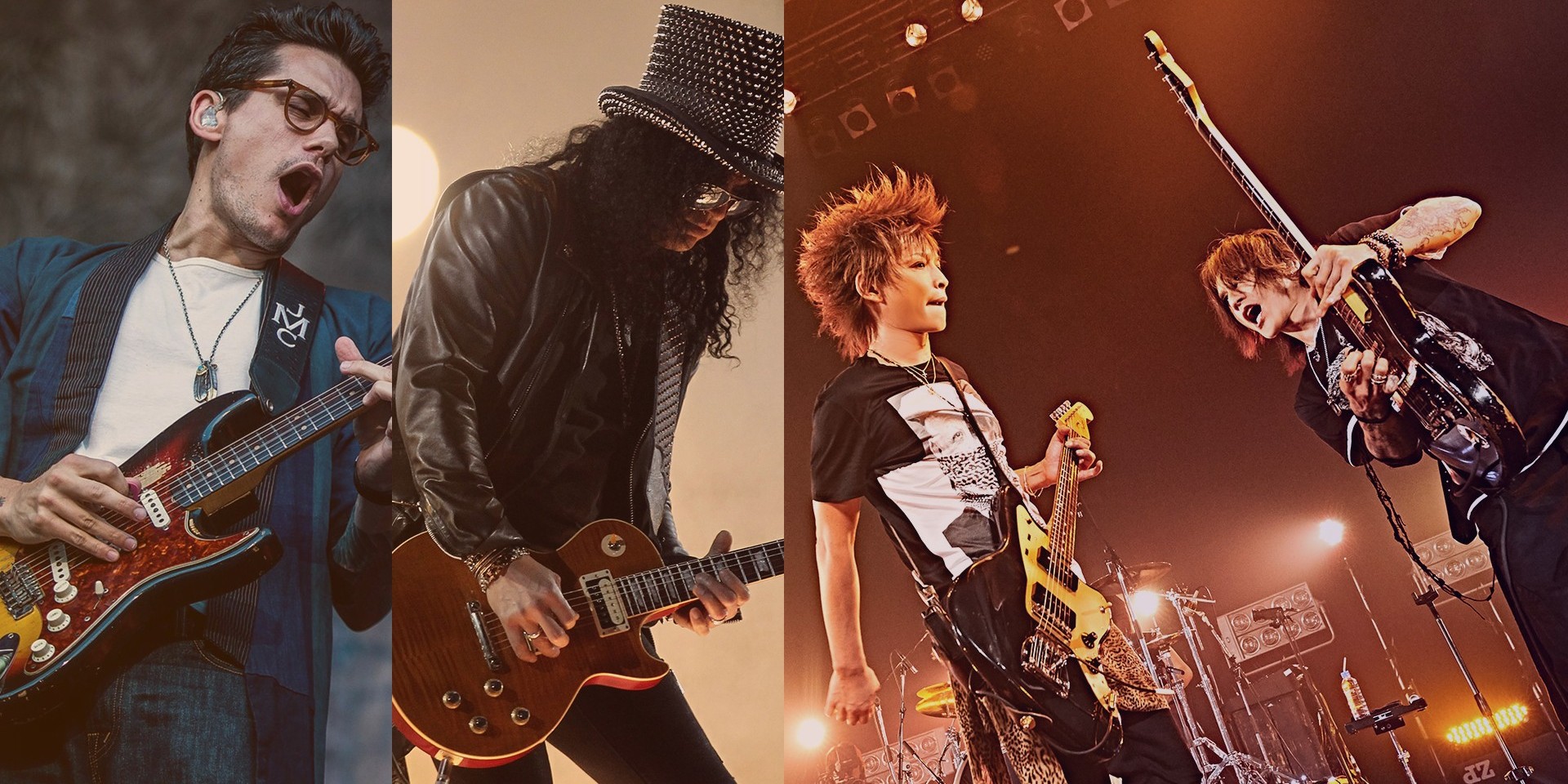 Guitars are never always front row centre in concerts, and when they are it’s probably for a mind bending solo. Sometimes these solos are lackluster, but if you’re at the right concert with a sick guitarist, the solo will blow your mind.

But what’s better than just one guitarist? Two. Dueling guitars have fallen out of fashion in recent times — but with the impending excitement that comes with Japanese rock band LUNA SEA's Inoran and Sugizo holding a guitar-centric show in Singapore, we thought of compiling a list of 10 insane moments of guitar wizardry (with some surprises included) for you to see how insane guitar greats can get with the instrument they love so dearly.

In no order of importance...

The two guitar legends put up a Crossroads concert where they each played songs from one another, and went to work adding their own unique magic to songs that we didn’t even know could sound so good.

These solos, worked in masterfully to the end of Keith Urban’s ‘Sweet Thing’, show that the world of country and blues can merge to form a riveting three minutes of back and forth guitar wizardry. Watch the whole song if you want, but the craziness starts only at the 3:05 mark.

This one’s for the metal fans who would love a dose of Black Label Society’s Zakk Wlyde melting notes with guitar maestro Slash. The video itself opens with Slash adjusting a bank of Mesa Boogie and Marshall stacks, the precursor to a high-octane duel segment of shreds and licks that speak volumes of the legends’ talents.

"Old is gold" – sometimes what we need is a badass riff to get down to before any of that complicated finger plucking action can form a duel. Self-made Master of Solos Kirk Hammett playfully opens with a behemoth riff that is typical of the Metallica legend, which UFO and ex-Scorpions hook master Michael Schenker immediately goes to work on. The result is a beautifully improvised guitar duel between two stars that are wholly deserving of their positions as legends in rock and metal.

Mark Tremonti is a widely acclaimed guitarist both commercially and critically – his work with his main project, Alter Bridge, and his solo project, Tremonti, has generated much hype over the years (maybe not so much with his former main band Creed).

The hard rock behemoth is known for his ability to write powerful, foreboding guitar riffs and speedy solos that make his fingers blur on video. His partner in crime, Myles Kennedy, is also not too shoddy. The duo does duels regularly, belying a chemistry that is rarely seen in bands today.

This video is the first and only video on our list that’s a proper duel, as the two guitarists go back and forth one-upping each other on a solid foundation formed by Modern Drummer Hall-of-Famer Terry Bozzio. This is a typical old school guitar duel, and definitely one for the history books.

While this video repeats the appearance of Steve Vai on this list (but honestly, who’s complaining?), no guitar solo list is complete without Dream Theater guitar virtuoso John Petrucci. Joe Satriani is such a household name that he doesn’t even need an introduction. These three bossmen take their guitars and create beauty with them in this three-way duel.

For those who haven’t heard about the movie, a quick summary: Evan is a musical prodigy who is believed to be an orphan. The scene above is a moment in the movie where August meets his father for the first time, with both characters none the wiser about the significance of the person they’re dueting with. What ensues is a beautiful duet of slapping and popping that’s sure to put a smile on your face, just as it does on August’s.

The two Japanese guitar Gods are guitarists for popular J-rock and visual kei band Jupiter, known for their fast-paced blast beat verses as well as their soaring, melodic choruses.

Signatures of their songs are often solos by the two guitarists, Hizaki and Teru — and they show much of their brilliance and they masterfully melt their sounds together to form a badass yet melodic riff that screams experience and mastery. Their brilliance shines through especially in the introduction, as well as from the 2:54 mark.

Guitarists and melody makers for progressive/experimental quartet Polyphia, the two guitar masters were recently in Singapore for a guitar clinic, co-hosted by Swee Lee and Ibanez guitars. The duo are a perfect example of how guitars can sound when their sounds melt into one another, as they deliver song after song that ony adds more to their credibility as one of the most promising young bands rising out of the woodwork today.

No list is complete without some comic relief – and sometimes we realized that late night talk show hosts dabble with the world of music. Whether it be Jimmy Kimmel organizing a drum battle between Chad Smith and Will Ferrel, or Conan showing some surprising skills on the guitar, this video is for the laughs – and probably a bit of surprise too.

Sugizo and Inoran are probably two of the most iconic guitarists in the J-rock scene today. Known for their work in the famous LUNA SEA, the luminaries have spent time apart in their own projects, building their own flavour into their technique. Sugizo is more known for his speedy, shreddy, solos because of his work with metal outfit X Japan, while Inoran is known for his more mellow, indie vibes as the guitarist for the multi-lingual Ben Lloyd.

If these duels and duets have you inspired, this inspiration has come at the right time. Not too long ago, we were excited to announce that J-rock legends Sugizo and Inoran from LUNA SEA have come together on the 2nd leg of their Best Bout 2017 tour to bring the magic of live duelling guitars to Zepp @ Big Box.

The duo will battle it out in a war of shredding and plucking as they exhibit to the world their virtuosity on the 6-stringed instrument of hooks. You can get your tickets here. Duelling guitars falling out of fashion in recent times? We stand corrected.