We always like to say how Laneway delivers, but boy did they deliver this time.

Judging from the selection of 22 bands (yes, 22), we're presented with one of their most well-rounded lineups yet. Bringing back the indie heavyweights like CHVRCHES, Beach House (both Laneway alumnus) and Grimes (whose appearance at Mosaic Music Festival 2013 was documented in a music video), there are plenty of local live debuts to get excited about.

Firstly, we know many of you are excited with the prospect of a full Flume live show, having been long rumoured to make a local appearance since his debut album dropped in late-2012. Now that that's finally happening, we won't be surprised if he's taking up the headlining slot on the Cloud Stage, only because there's no other timeslot suited for him than one after 9pm, in our opinion.

There will also be duo Purity Ring, producer Hudson Mohawke and Australians Hermitude. The electronic side of the line-up will be rounded off with Singaporean acts Intriguant and Riot !n Magenta. Very exciting.

But now, let's also talk about the unconventional choices that have gotten us so, so stoked — jazz wunderkind Thundercat, former Odd Future production team The Internet and breakout singer-songwriter Shamir will all be making their live debut here. Meanwhile, instrumental trio Battles will be making a long-overdue return, also marking a return of a fully-instrumental rock band on Laneway since Holy F*ck in 2011.

The lineup has also been given serious muscle in the realm of rock music — METZ, Violent Soho, Big Scary, DIIV, and Cashew Chemists are all added, marking their debut on Laneway Singapore. Fans seeking a gentler Laneway experience should be satiated with singer-songwriter Tobias Jesso Jr., ambient-pop artist East India Youth and Hong Kong math-folk group GDJYB. While we're disappointed BP Valenzuela won't be coming down to represent her home country, we're glad Cheats will be filling up that slot for the Philippines.

Check out the full lineup on the festival's official poster down below and get acquainted (and reacquainted) with the acts of Laneway Festival Singapore 2016, happening on January 30, 2016 at Gardens by the Bay.. Tickets are now available through SISTIC. 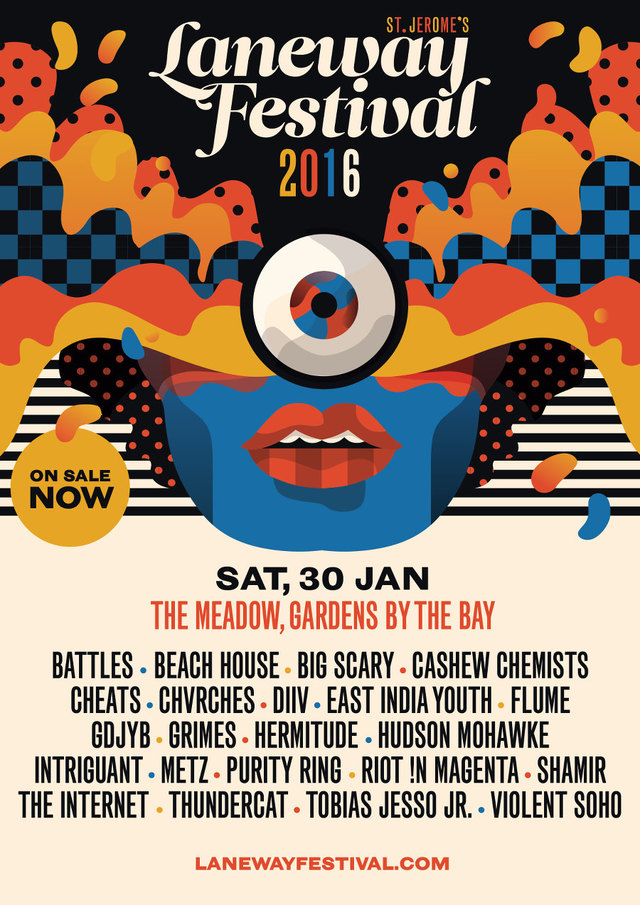