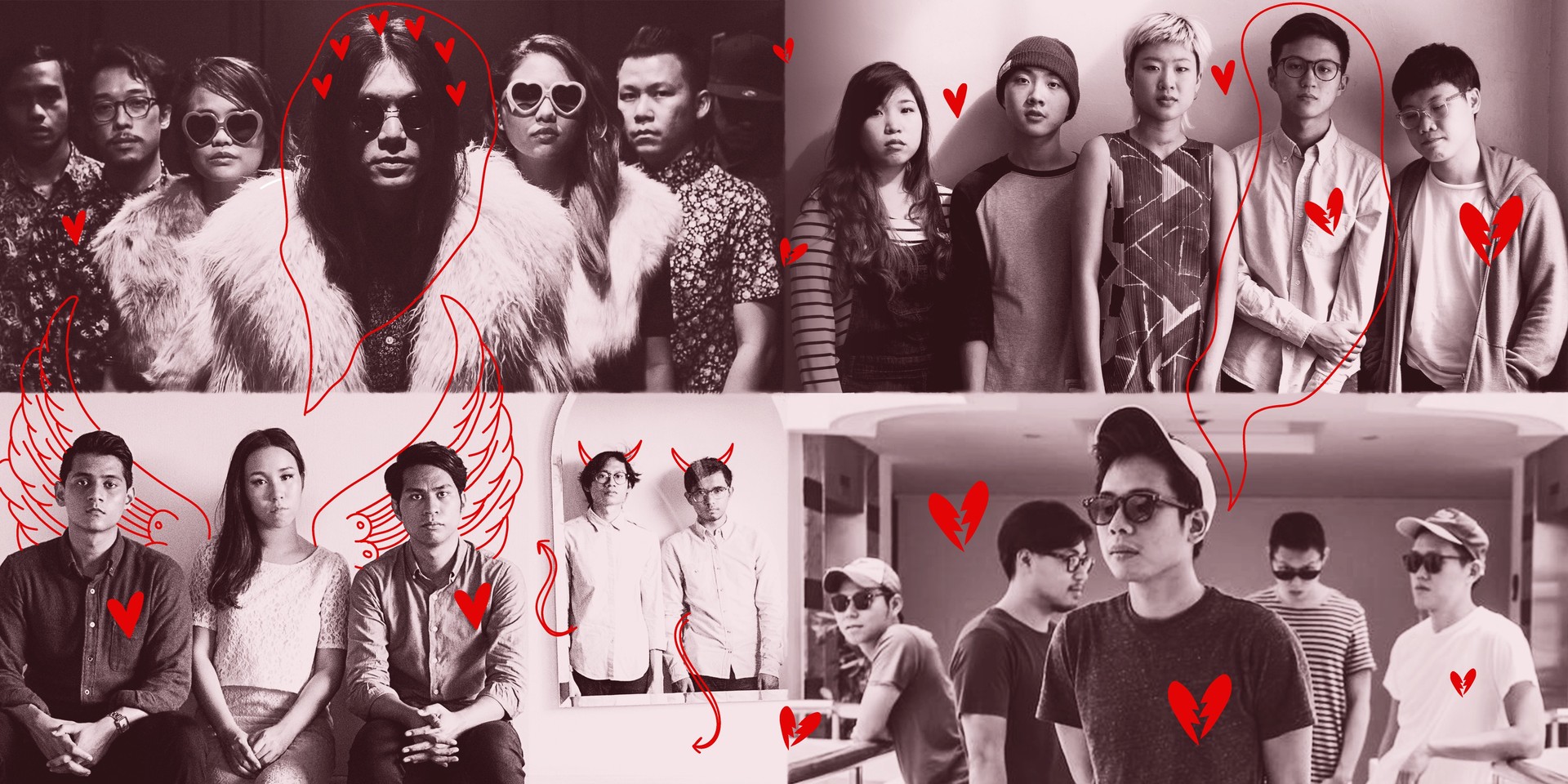 Pining, yearning, and the joys and tribulations of young love all have one thing in common – they make artists create good music, including our very own. Singaporean musicians have long found this a vital source of songwriting inspiration, from Serenaide and Plainsunset in the 2000s and Gentle Bones, Cashew Chemists and Cosmic Child in the 2010s. So on this Valentine's Day, enjoy a playlist of classic local love songs that will either make or break you. It's also no accident that quite a few of these are throwback tracks, because what goes better with love than nostalgia?

If you've got your own favourite Singapore love songs that aren't on this list, tell us in the comments below.

Serenaide - 'The Girl From Katong'

From Serenaide's 2005 album The Other End of The Receiver, ‘The Girl from Katong’ has stood the test of time and still strikes a nostalgia nerve today – just as catchy and as uplifting from when it was first released.

"She said run over you over me / And in a blinding flash, we ended in a crash / I got her to her feet and then she smiled at me"

Think White Lies or Arctic Monkeys, but with the smooth, soaring voice of frontman Saiful Idris – that in our humble opinion summarises The Great Spy Experiment. In this track, they sing about the insatiable yearning for someone when you’re in the thick of love.

And of course, we can’t forget this part of the bridge that almost makes you want to go into cuffing season all over again:

“Mind my heart, this twisted attraction /  Taste your sweet release on my fingers / Rest my soul but leave me so breathless”

After the successful debut of their first album with hits ‘I Want You’ and ‘Runaway’, Electrico displayed more of their electro-pop finesse through their second album Hip City. ‘Love In New Wave’ earned its place on this list with their lyrics and punchy synthetics.

“Your synthesizers to the bone, they lift me off my legs of stone / All I need is to close my eyes / We’re making love in wave”

They’ve been teasing new music since September 2017, so it’s only a matter of time until they release something.

A deep(er) cut from the debut EP of the now-disbanded indie rock band Monster Cat, 'The Courier' is an understated, evocative duet between two separated lovers. The imagery is beautiful and perfectly captures two people pining for each other while miles away, though it ends more with anguish than simple sadness.

"Don't you know that I want to be floating inside your stormy sea? Fish me out with a hook in time, that I whispered into the night. "

By now you've probably realised this isn't any lovey-dovey romance playlist. Nope. We had to slot in Charlie Lim's 'Bitter', fan favourite from TIME/SPACE and also one of Singapore's most heart-wrenching and richly lyrical songs in recent memory. Here's a toast to all the recent singles feeling more than a little lonely this Valentine's Day.

This duvet-pop track from Cosmic Child has it all, melancholic and serene instrumentation, dream-like vocals and the inexplicable capability to get you thinking about the good times you share that someone special.

For this cut off Sun Eat Moon Grave Party, Forests dig deep within themselves to write an unexpected, yet incredibly fun love song complete with a tapping guitar solo and gang vocals.

"Of all these empty faces / I miss yours the most"

What’s a love song if it doesn’t haunt you for days on end? 'Swan Song', from Pleasantry's second album Synapses, is a perfect example of their dreamlike vibe. Pair that with some potent lyrics and it’s the perfect recipe for a heartbreaking croon.

“This hurt; it burns, burns through the silence of the night / You're gone, you're gone, forever has a number”

Not forgetting that slow burning bridge:

There's no one better to capture the giddy, joyful feeling of being in love than the ever-cheerful Pinholes. This cut, off 2015's Youth of Gold, is a perfect, swaying ditty to young love.

"Will you wait for me awhile I should be there / You can make those funny faces I don’t care / Oh you dingle dingle lang, don’t make these end"

21st century love is not simple, and in 'Dear Paramour' Inch Chua captures probably what many of us would like to tell that infuriating person. The slow burn in this Bumfuzzle cut is simply exquisite, and will give voice to your complicated emotions better than you ever can.

Gentle Bones - 'Until We Die'

Gentle Bones’ (Joel Tan) debut single is the literal embodiment of “Till death do us part”, with a whole chorus that goes:

“And darling we will sing until we die, we’ll never waste these tears on fears and cries, and now the world is ours to take, and every single move is ours to make."

Joel earns himself the title of “Singapore’s Ed Sheeran” with familiar acoustic guitar chords and a feel-good melody, making ‘Until We Die’ a classic Gentle Bones track.

A towering classic of Singapore pop-punk, 'Find A Way' is Plainsunset's consummate love song about the perennial problem of just not being able to get someone off your mind. A perfect song to sublimate your emotions in the mosh to.

'14 Grand' is the newest song on this list, but this smoky, R&B track from Ffion and Fauxe about a relationship that's more like a tangle you're not sure if you want to extricate yourself from is more than worthy of inclusion.

Even though Postbox has disbanded, we couldn’t resist including this song in the mix. From the same band that birthed ‘Miss Sunshine’, Postbox sings about the obsession that comes with young love and the fantasies of running off with someone when you can’t seem to get enough of them.

“Where’d you leave / Come away with me”

The final track off the Previously On... Cashew Chemists EP, 'First Kiss' is Cashew Chemists doing The Black Keys – but maybe better. This track is a swaggering story of impulse and lust. Love? Who's got time for that?

"Step outside for a cigarette smoke, yeah / Grime on my blue suede shoes / And I just wanna take you home 'cause we got nothing to lose"