Mogwai. The soundtrack of my life. Pretty big claim to make there but I'll stick to it. Staying relevant is quite a challenge for musicians and a lot can learn a thing or two from this Scottish quintet. For eighteen years, the band has been pushing the boundaries of post-rock and continue to do so with their 2014 release, Rave Tapes. They've dabbled in film scores, both horror and one on Zidane, messed around doing DJ sets and for the latest material, used 'more synthesizers'. Progressing through the years (euphemism for growing older) with Mogwai has been and is definitely something ongoing.

It was only normal that I got a bit nervy while being put on hold to talk to Barry Burns, multi-instrumentalist and sometimes vocalist of Mogwai. But what ensued was a pleasant chat on their cinematic endeavours, Singapore, Gremlins and even a (successful) song request.

Hey Barry! What are you up to now?

I'm actually at parent's house just outside of Glasgow. It's about 7 degrees and it looks pretty horrible outside!

I know, it's pretty crazy isn't it? I actually just got back from Thailand last week. I went to Thailand for two weeks with my wife, for Christmas and New Year's so I'm quite depressed now.

Ah don't worry, next month you'll be in Singapore.

So this is your 4th time back in Singapore, do you remember much about it? What do you look forward to the next time?

Yeah, the food definitely. We went to hang out at The Esplanade and some little shops and the market place in Little India. We love Little India because although indian food in Scotland is pretty good too, and not anywhere else in UK, it's still not as great as over there.

We also always have a nice show in Singapore. The kids that come to the show are really nice. Really, really nice - good crowd. The next time, we'd like to have a nice crowd again as well, and have a nice meal - that's important!

The last time you guys were here, you did a DJ set at a mini-festival and now you're coming back with a pretty awesome line-up.

Oh yeah, sweet! I'm looking forward to seeing them again, we played with them before in Australia (Harvest Festival, 2011).

Do you still do DJ sets?

Maybe once or twice a year, but not really. We're not really DJs I think, it's just a fun thing to do especially if we've just played a concert and we're at the place so we might as well DJ but nah, it's not much of a money spinner.

When you return this time, you'll have released Rave Tapes already. Tell us more about this album.

Ah number eight. I think it's mostly stripped down compared to the last album. There's a lot of synthesizers and lots of toys, even drum machine stuff on there as well. We always like to try new stuff so that's what happened with this record.

You'll probably find that Rave Tapes is rather influenced by John Carpenter (composer for horror film scores) and maybe some soundtracks that we've been watching and listening to, there's quite a lot of that.

Ah soundtracks! You guys have been pretty active as film composers of late.

Yeah, we've really enjoyed it. It's different from a 'normal' album thing because you have a conversation with the director about what he wants so you sort of almost have an extra person in the band to tell you what to do with the film and images. It's unlike doing just a Mogwai album because you don't have that contact with anyone else when working on a normal album, it's much more self-contained.

So with the Zidane film, are you guys huge football fans as well?

Dominic, the bass player and myself are not super big fans, the rest of the band are. I mean, sometimes I go to matches and stuff but I don't really understand it. It's one of those things we just latch on to over the weekend.

If you guys had to compose a soundtrack for Singapore, what will it be like?

(Laughs) Oh my god, I have no idea! It would probably have to do with nice food and the really bad downpours and rain you all get. Back when we DJ-ed there, it was so wet, it was really bad weather.

One of our readers would like to know if you will be adding any of the scores on the setlist for Hostess Club Weekender? And how do you keep the setlist so varied for every show.

I'm not sure, we're still sort of working our way through the old albums and making our way to the recent one - we want to play all the old songs before we can throw in some new material. Actually, we just might. We get really bored of playing the same songs and we like to mix it up a bit so we might play something.

We always spent too much time making the setlist although it should only take about five minutes, we don't want it to sound too rushed. It starts from putting in 4-5 new songs on it and we just add in what fits. 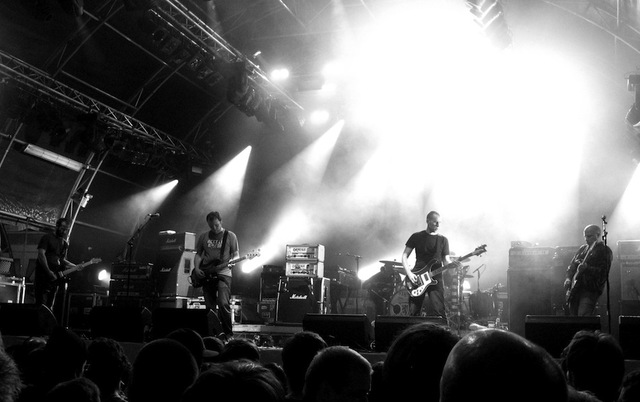 Could we make a request here?

We'd really like to hear 'Two Rights Make One Wrong'...

Oh that's right, all right! We'll be sure to play that.

What kind of music are you guys fans of?

There are a few bands that we all like, but we've got quite different tastes in music between us. Dominic, he listens to a lot of metal. Stuart likes a lot of blues and folk music from the 60s and 70s, I like quite a lot of electronic stuff. It's funny now that I think of it. It's quite a good thing though that we all like different kinds of music and that our music doesn't sound anything like the music we listen to.

As a predominantly instrumental band, what was your formal education in music like?

Stuart did a sort of further education diploma thing that you get, and I almost became a music teacher. Which I'm glad didn't happen... I just quit! The rest didn't really go to music school but just put their heads in it and we became Mogwai.

About the Mogwai name, which Gremlin movie is your favourite?

Number one! The new batch wasn't so good was it? Every film is done five times now, so I'll just wait for a remake.

We just watched that one for Christmas, it's my favourite.

(Laughs) Yeah, people forget! I think some people sort of forget that it's a Christmas movie.

Lastly, would you compose for a Gremlin movie?

If they'll have us, we'll do it. Definitely.