You've gotta be living under a rock to not have heard about the Hostess Club Weekender happening on February 22 2014. Five acts, all worthy headliners will be taking the stage at Fort Canning Park - a place where we haven't enjoyed a gig in a while. We are really looking forward to seeing some of our favourite acts such as The National, Mogwai and King Krule up there on the stage, but first, allow us to introduce Hostess Entertainment. 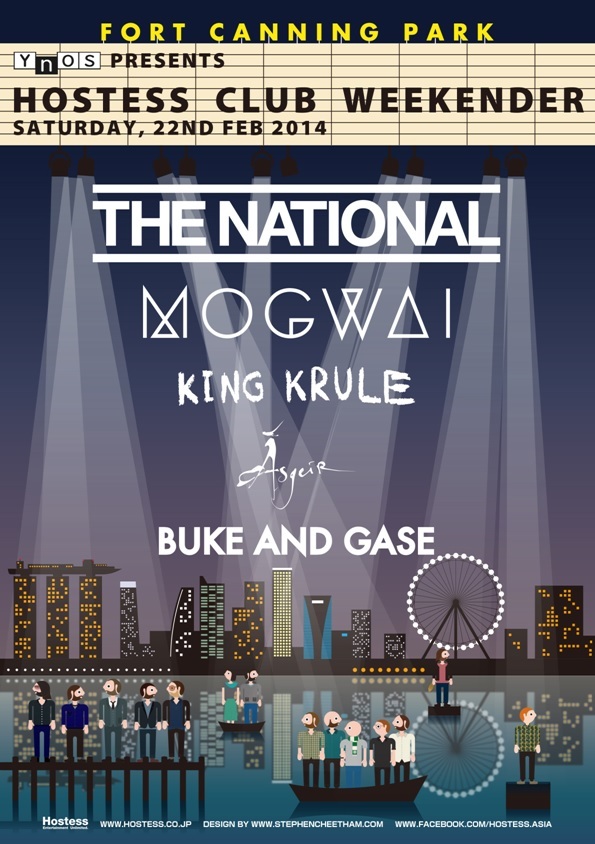 Established in Tokyo in 2000, Hostess Entertainment is the fastest growing pan-Asian independent music company committed to the advancement of new and quality music, which is why they have some very exciting hype artists onboard. By expanding their brand to our shores, they've also brought in the Hostess Club Weekender - a much coveted event in Japan where they started.

Speaking to Nikki Mahmood-Chee, label manager in Singapore, she says, "As part of the company's gradual regional expansion, our unique live series 'Hostess Club Weekender' which has become a permanent and hugely popular fixture in Japan, will land in SIngapore next year. Previous shows have featured bands like Vampire Weekend, These New Puritans, Unknown Mortal Orchestra, Youth Lagoon and more," she added, "We are here finally as we feel Southeast Asia's music fans are now more than ready for the artists and music that we represent, and that is a very attractive quality. Our primary ambition is to popularise good music, really!"

Some hot acts we should check out now:

Dev Hynes deserves to be listened to, and his latest longplay Cupid Deluxe is star-studded (Chairlift’s Caroline Polachek, Dirty Projectors’ Dave Longstreth, Friends’ Samantha Urbani) and should not be missed.

On his latest album Julia With The Blue Jeans On, it is just Spencer Krug and his piano being pure, intimate and authentic all at the same time.

Widely tipped by many music journals as ‘the one to watch’ in 2014.

Sometimes we don’t have to go too far to find talent as witnessed in this Filipino.

To celebrate Hostess Entertainment's presence in Singapore, we have 5 sets of exclusive Hostess goodies to giveaway! Here's what you can expect in this bundle:

+ first 3 to come pick it up gets a Hostess Entertainment t-shirt!

All you have to do is:
1. Like both Hostess Entertainment and Bandwagon on FB.
2. Share this article on your page.
3. Fill in THIS form and tell us why you deserve to win!