K-pop's explosion in the music industry is exactly how it is: a spectacular burst of colour, crazy fashion, tightly-choreographed moves, and elaborate production for music videos. 'Hallyu' is the term that is used to describe the hurricane of South Korean culture that began flooding mainstream pop culture. The Korean government has promoted hallyu, using it as a form of soft power by making South Korea the Hollywood of Asia. Korean TV dramas such as the widely popular 2002 'Winter Sonata', Korean film, and especially Korean pop music have found their way into our pasar malams, the international music market, and effectively earwormed into our heads.

It's easy to explain how K-pop is such a mainstream success. Aesthetically, the singers are young and the setting contemporary, thematically they sing about traditional things like family, friendship, and romantic love, albeit with a splash of comedy sometimes. The hooks are often sung in English, and sometimes suggest a dance move: the coy finger-wagging in 'Nobody But You' (Wonder Girls) and the horse gallop in PSY's 'Gangnam Style'. It is truly music for all ages.

Which is why it is going to be a family affair when one of the biggest South Korean record label and talent agency YG Entertainment (their artistes have garnered more than 5 billion views and 12 million subscribers collectively on YouTube) is bringing down their YG Family 2014 Galaxy Tour: Power in Singapore mega concert to our island. Stretching over two power-packed days, catch your favourite K-pop stars from the label such as the megastar PSY who has even collaborated with Snoop Dogg (or Lion?), hip-hop trio Epik High, top boy band BigBang, edgy girl group 2NE1 and newcomer Winner. The last time the Korean-wave hit Singapore was when talent agency SM brought in the SM Town Live World Tour III with stars such as Girls' Generation and BoA entertaining a 23 000-strong crowd. No big deal.

The YG Family 2014 Galaxy Tour: Power In Singapore will be held on Sept 13 and 14 at the Singapore Indoor Stadium, and will be the only stop in South-east Asia. Tickets are priced from $168 and will go on sale from Saturday, July 19, 10am via Sports Hub Tix ticketing channels. Additional details about the tour can be found at their official website. 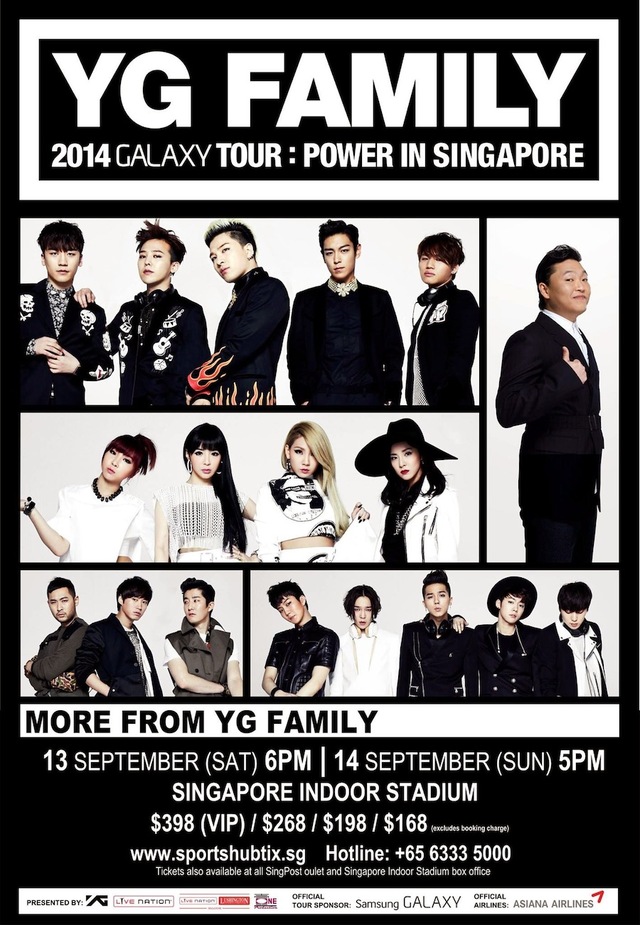