IGNITE! Music Festival returns to the Republic Polytechnic lawn for a two-day all-out local music extravaganza this August! The annual student-driven music festival is already in its seventh edition this year, attracting an ever-increasing amount of spectators to the green at Woodlands every iteration. Last year's celebrations brought in a whopping number of 14,000 festival-goers from all around Singapore, catching the likes of The Summer State, A Vacant Affair, Tiramisu and more across two days - fulfilling the vision of introducing homegrown acts and garnering greater support for local music to young Singaporeans.

This year in typical IGNITE! fashion, they've invited popular festival alumni to grace the main stage again - bands such as 53A, The Sam Willows, Bear Culture, ORANGECOVE and Aspectrum are no stranger to the IGNITE! festivities and are back for more this year. Folks can also look forward to seeing newer (but no less exciting) upstarts Gentles Bones, Stopgap and wyd:syd; all of whom have been making waves in Singapore's music landscape over the past year.

Already sensational crowd-favourites in the local scene, acts such as Charlie Lim, ANECHOIS, Pleasantry and Shigga*Shay will be making their IGNITE! debut come August 15 and 16. And of course who could forget local alt rock icons Caracal, who'll soon be making their 5th appearance at the Republic Polytechnic green.

Other than the thrilling music lineup, IGNITE! also seeks to promote youth volunteerism through music with booths of Volunteer Welfare Organisations housed within the festival village alongside buskers, charity events and workshops in the ongoing fringe events from 4th to 14th August. As a testament to how far the festival has gone since its humble origins in 2008, this year also sees the biggest number of sponsors, supporters for the festival with the inclusion of LUSH 99.5 FM as official radio station, partners SGMUSO, Sennheiser Asia and many more. Bandwagon is proud to be the official media portal for IGNITE! Music Festival 2014. Here's looking forward to the party up north in August. 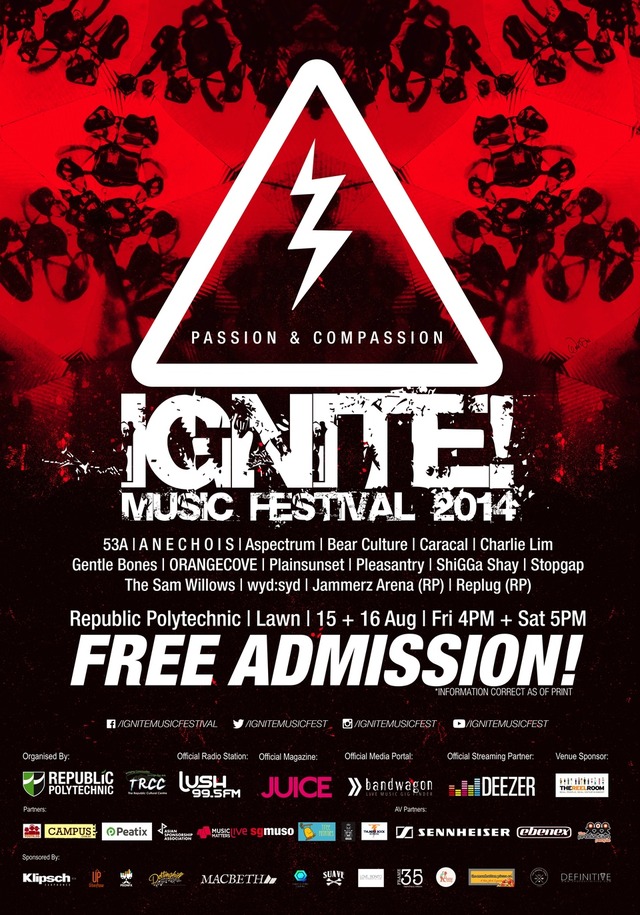