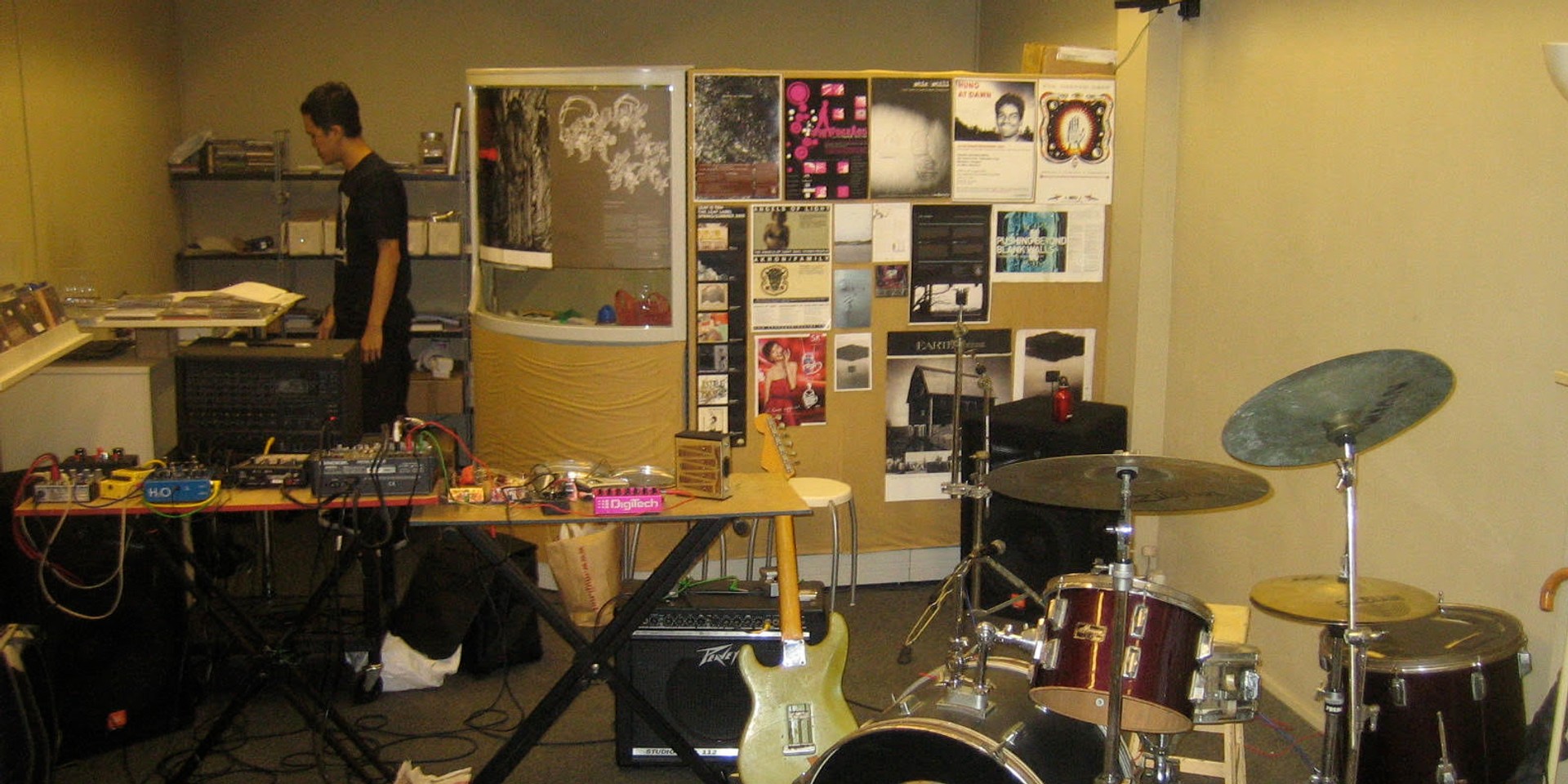 Earlier this year, Yuen Chee Wai and Lasse Marhaug released In Praise of Shadows, a two-track, 37-minute album that took 10 years to make.

Yuen – the Singaporean musician, artist and designer and member of The Observatory – as well as Marhaug – Norwegian artist and musician who is also a longtime friend of the Obs – first planted the seeds of In Praise of Shadows over a decade ago in 2006, when they had an overnight recording session in experimental record store FluxUs in Peninsula Shopping Centre. ("Fluxus" is also the name of a rebellious artistic movement in the 60s and 70s championed by the artist George Maciunas.)

From Yuen's telling, it seems FluxUs was short-lived but not insignificant. It's not easy for the uninitiated in 2018 to find out more: a Google search turns up only scraps of information, like the occasional mention in an interview with a Singaporean noise musician, but an archived post by the website for now-defunct Malaysian record store The Ricecooker offers what seems to have been FluxUs' mission statement at the time:

“Because the world has deceived us into thinking that music is difficult. Improv, experimental, Japanese psych, free folk, avant rock, noise, electronica, extreme metal, pastoral decay… These are not difficult but the simplest forms of musical expression. They speak of the simplest emotions. Theory and method, you say? But what about the sound of falling rain? Or the sound of blackness and despair?” 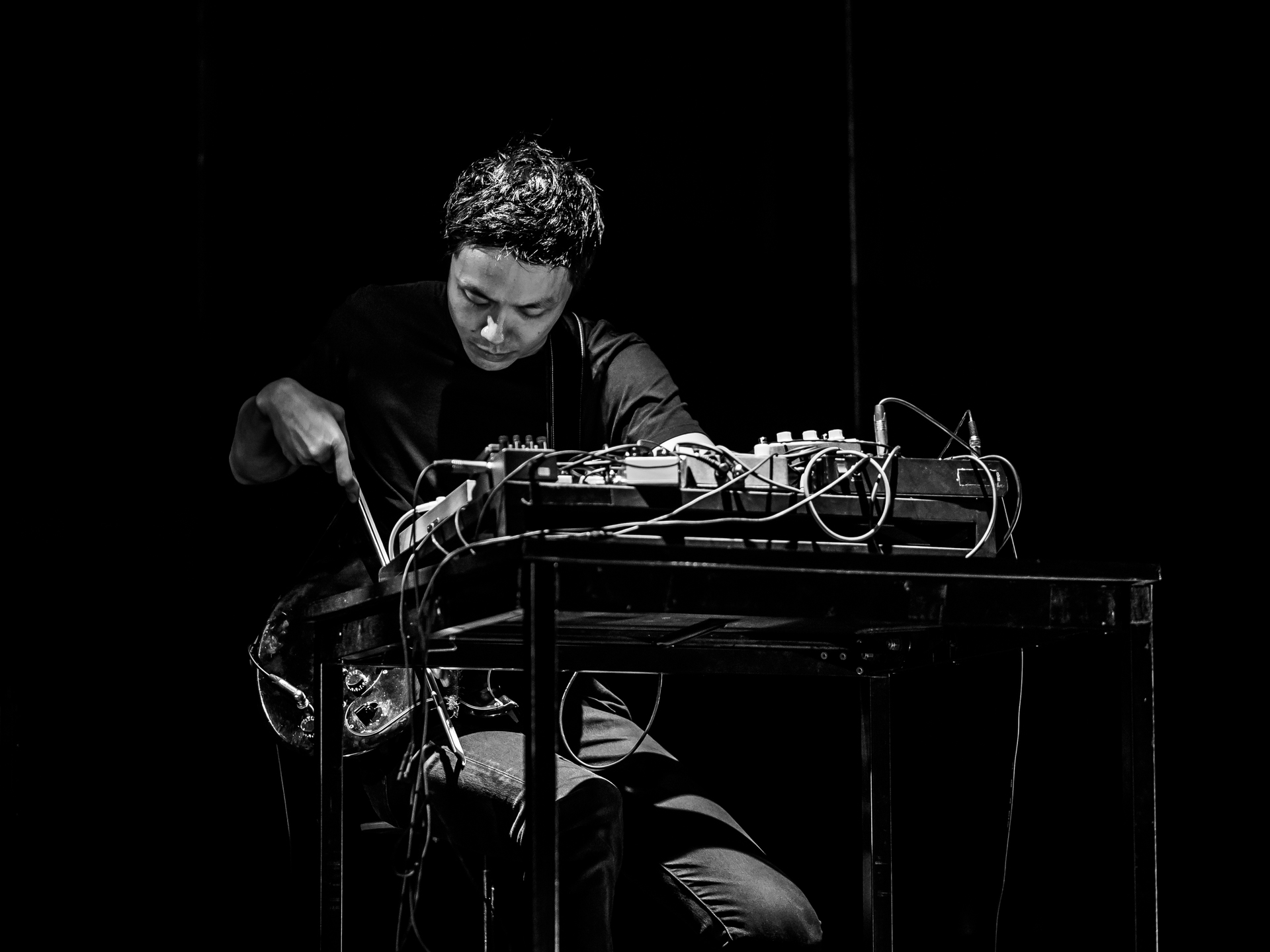 Yuen and Marhaug recorded together again in 2016, in Marhaug's studio in Oslo – and as Yuen tells in the interview below, the music from that session complemented the session from 2006 with a strange synchronicity: the former's sharper electronic sound alternately spiking and being soothed by the latter's drones. The album is partly inspired by the book it was named after, In Praise of Shadows by Jun'ichirō Tanizaki.

Read the interview with Yuen Chee Wai below (edited for length) where he expounds on the making of In Praise of Shadows – which was released on Singaporean experimental label Ujikaji Records – FluxUs and his bond with Lasse Marhaug over the years.

Tell me more about FluxUs and how it came to be that you and Lasse Marhaug ended up recording there overnight.

FluxUs played an important role in the experimental and improvised music / sound art scene in the short span of time that it was around. It was a CD shop opened by my university friends Harold Seah and Joseph Tham, on the fourth floor of Peninsula Shopping Centre. From June 2005 till July 2006, it was a place where many friends and musicians met and hung out, talked music and bought hard to find experimental music during that period. 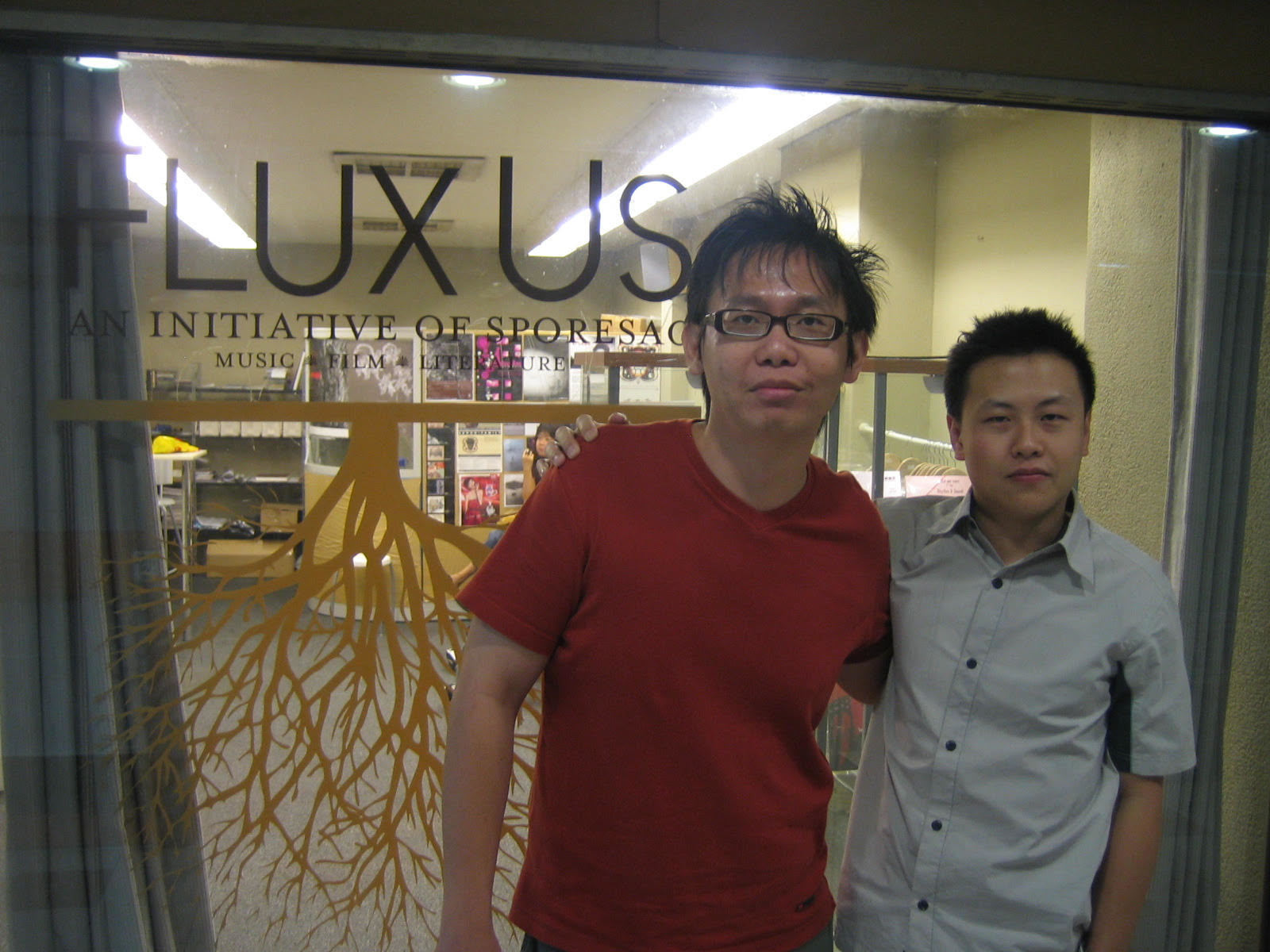 Friends like George Chua, Alwyn Lim, Ricks Ang and Vincent Yap, took turns to man the shop. Besides spending a lot of time hanging out at FluxUs, I also helped with the design of all their collaterals, and assisted in putting together some in-store gigs there. Some of the more notable ones included Lucas Abela, Birchville Cat Motel, The Observatory, Jazzkammer [the project of John Hegre and Lasse Marhaug, active in the years 1998 to 2012] and many local and regional experimental acts.

Lasse came to Singapore during that time because Jazzkammer and myself were going on a concert tour which started with a concert I organised in Singapore at 72-13, called I have escaped even myself (which featured George Chua, Evan Tan, Jazzkammer and myself), and after that, the three of us went on to Bangkok, Shenzhen and Guangzhou. Lasse was also friends with Harold and Joseph, and we would hang out at FluxUs till late, fantasizing about each other's music collection. Joseph was exceptionally excited to find something in common with Lasse for being one of the few people he knew owning the Merzbow 50 CD boxset.

I roughly remember we chatted about recording a duo together, and needed a comfortable space to do it, and before we knew it, Harold passed me the keys to the shop, volunteering it to us to record after operating hours. So we recorded into the night encapsulated in a surreal atmosphere. We locked the glass door, turned off the lights, and crouched over our laptops on the carpeted floor, creating folds of drones over another, occasionally distracted by a security guard walking past doing his late night rounds. John Hegre (the other half of Jazzkammer) was the other person present, who stayed around, assisted and witnessed the session. That was in March 2006 and the day after the recording, we went on tour. 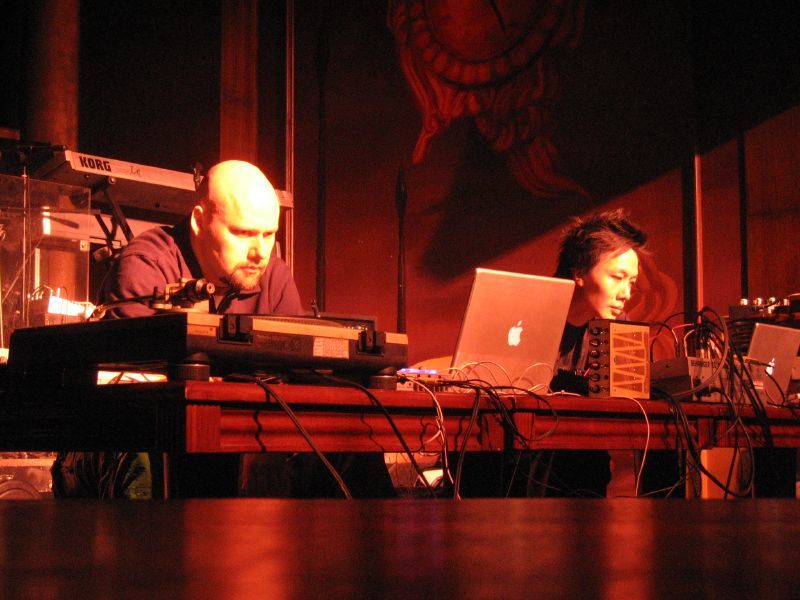 Before working with Lasse again in 2016, did you think the recordings made that night in 2006 would ever see the light of day? Were you making music that night with the intent of putting it out, or were you both just seeing what would happen?

We briefly discussed about the 2006 recording after that, but we never really spoke in detail about releasing it. Sometimes it is just like that, that we record just because. There was no compelling reason at that time to set a target of what we were to make of the recording. Maybe it was like writing an entry into the diary.

Lately I have been curious about the activity or event of recording. And I have been recording with many people of late, some in live concert settings, but not having an intention of releasing. I like to take time with recording, revisiting it once in a while when certain ideas come up, to maybe rework it, or bring it to a different direction. New things might happen. It is like having a surrogate estranged relationship with the documented material. Perhaps this is the reason why I don't release that much material. Because I am constantly letting it ferment or age, like old pu-erh tea. 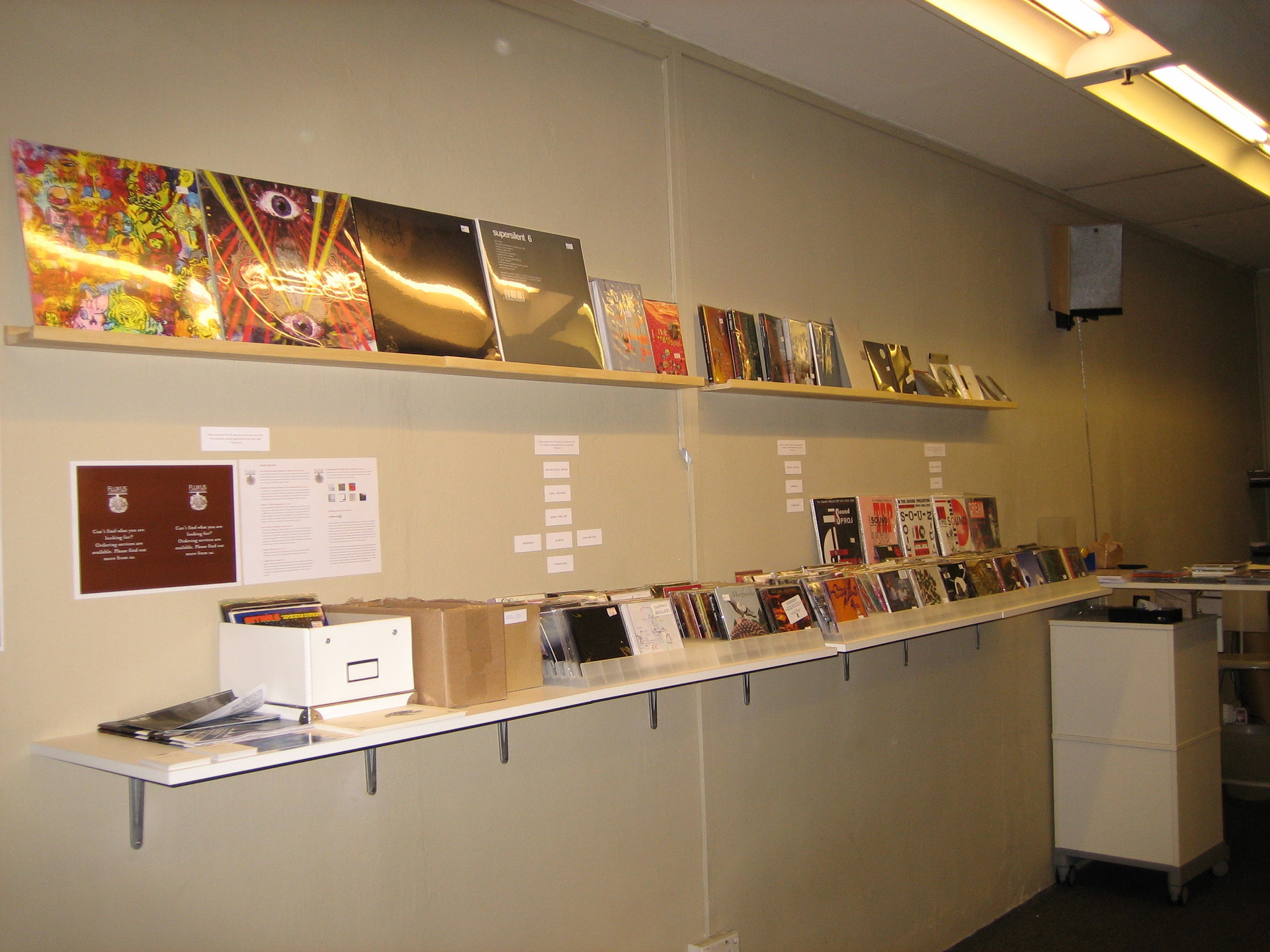 The interior of FluxUs. Photo by Harold Seah

The press release mentions that both the 2006 and 2016 recordings "fit together like a glove." Was the continuity between both recordings surprising to you, given the span of time between them, or did it actually make sense, when you heard how they folded together?

It was absolutely surprising to both of us. Lasse was initially mixing and working on the 2016 recording when it suddenly dawned on him that there was still this 2006 recording that was siloed in his hard disk. He tried putting them on top of each other and excitedly did a quick mix down and sent it to me for a listen. It was really late at night when I opened the file, and I remember it brought a smile. And immediately, that almost forgotten scene of us hovering over our computers in FluxUs played in front of me, glitch flickering to and fro the scene of us recording in Lasse's studio in Oslo.

Lasse and myself, we have quite a lot in common. Having known each other for a long time, we have shared many common thoughts and ideas about films, design, music, tea, collaborations, and he has also been a long time supporter and friend to many Singaporean musicians. And it was just like some kind of magic that while we grew in different countries so far apart and living under so different influences, that some way, our thoughts and ideas converge relatively seamlessly. We still pretty much kept in tact who we were, and that was quite a reflection in the music we made – like how we were symmetrical and asymmetrical in the ways we approach things. 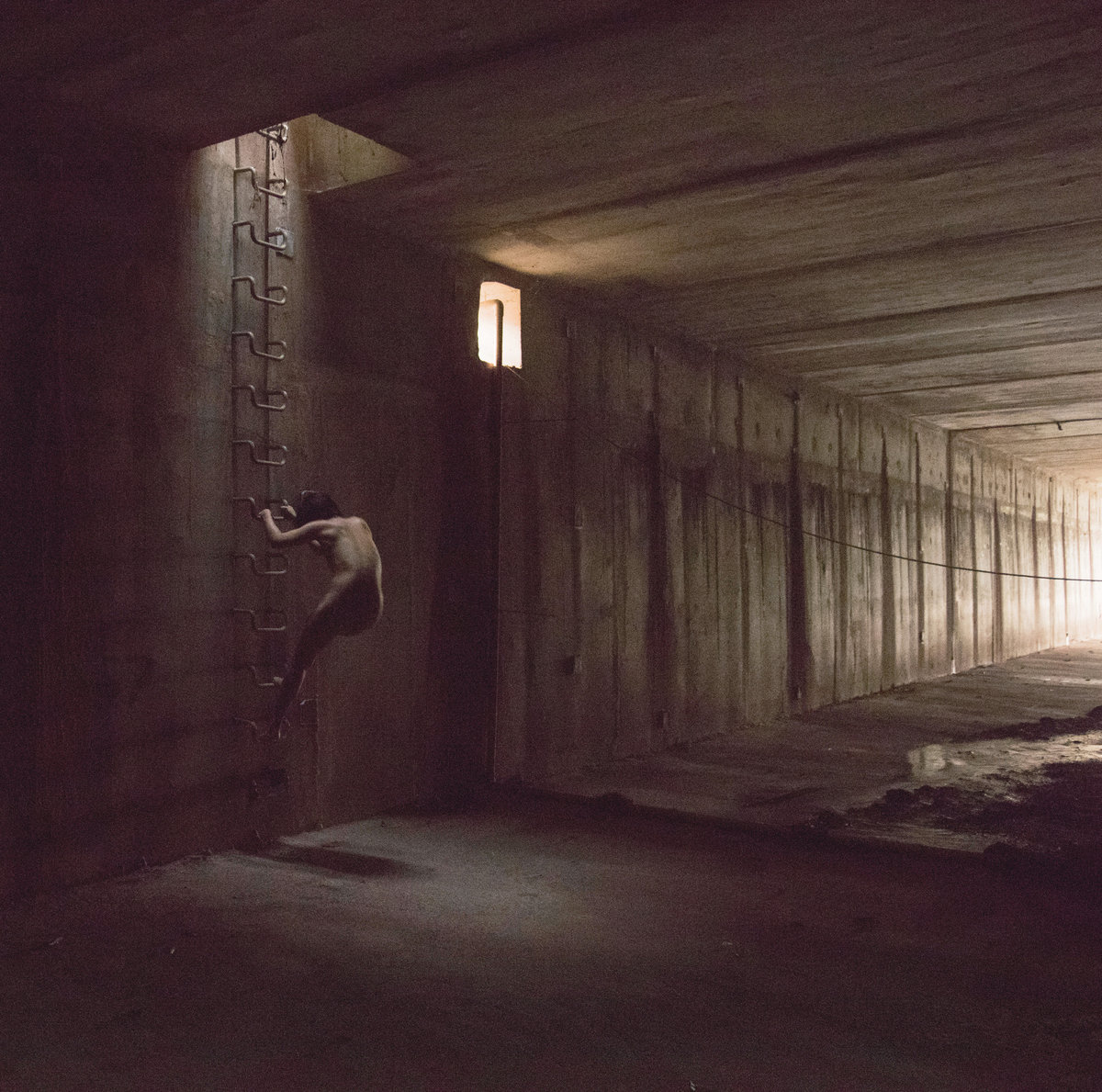 The album art of In Prase of Shadows. Photo by Phillip Aldrupp

When you listen to the tracks, do you still pick apart the 2006 sounds and the 2016 sounds, or have they in your mind melded to become a whole?

I initially listened it by consciously isolating the layers, distinguishing his sound from mine, from 2006 and 2016. But eventually, I felt that it was best to be in a state of mind where one vacillates between the details yet allowing oneself to be enveloped within the whole, much like the Tanizaki quote that we particularly liked – "We find beauty not in the thing itself but in the patterns of shadows, the light and the darkness, that one thing against another creates."

I suppose this album should be seen as a whole, which includes the concept where time seems to be folded over a decade, an almost science fiction narrative that appears, floating between angular vs horizontal, and framed by an equally important image of Philipp Aldrup's which I had been wanting to use for a long time. The liner notes written by Lasse more or less describes everything. 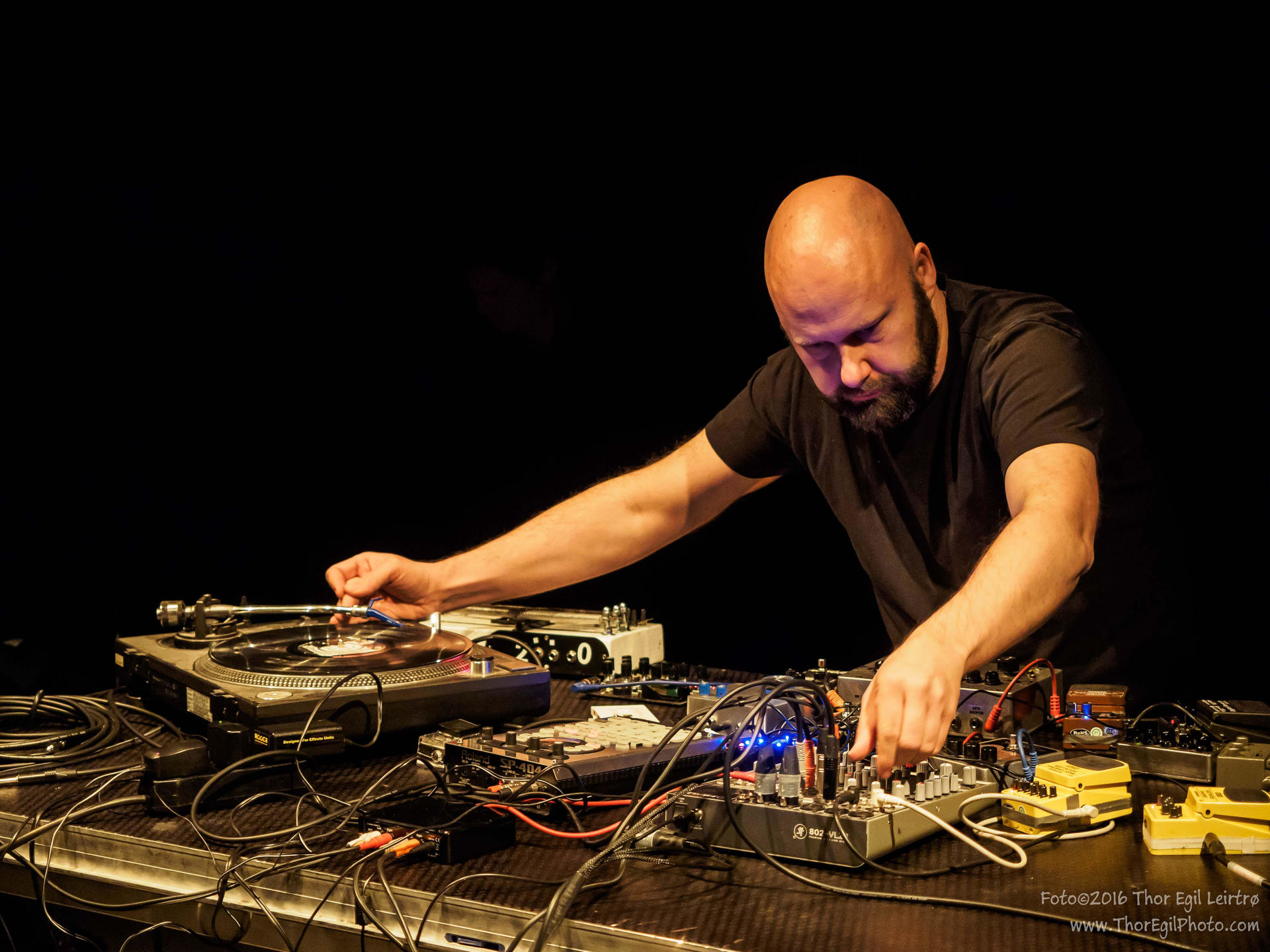 Could you say a few words on your friendship with Lasse and The Observatory's bond with Norwegian experimental musicians at large?

Lasse, together with many other Norwegian musicians, has been instrumental in The Observatory's creative development. He was constantly giving Obs advice and recommendations, and linking Obs up with numerous musicians and opportunities all over. Since 2005 till now, Obs has made many visits to Norway, collaborating, performing, touring, writing and recording with Norwegian musicians and producers…

I believe The Observatory's bond with Lasse, and with many other lovely Norwegian musicians and artists which was built over a long period of time, is a result of a trust between each other and a common dedication towards music making. Lasse has been in Singapore many occasions and also has a duo with Leslie Low called Pangu where they toured Southeast Asia quite a few years ago.

Lasse to me is one of those very special friends, that despite us being continents, temperatures and time zones alarmingly apart, has seen my development both as a human and a musician, the ups and downs, lefts and rights. It is funny looking back to the past on how we used to keep in touch when there was no Whatsapp, he would frequently SMS me through a web SMS service, and I would reply him through that web SMS, just so we needn't have to pay exorbitant long distance prices. Of course there was email, but that was different. Perhaps, the simplest way of summarising our friendship is that I will surprisingly get a birthday greeting from him every year without fail, and not many people in the world know when my birthday is.

In Praise of Shadows (Ujikaji Records) is available now on vinyl and in digital formats via Bandcamp.