Whoever said you can’t have your cake and eat it obviously never got the chance to be part of Indigo Fiesta 2012; a fundraising music concert showcasing local talent for youths by youths. Led by a group of passionate students from Lasalle, Indigo comprises of a series of workshops and sharing sessions about arts production for beneficiary Boys Town, with a lead-up to a hands-on concert experience on Sunday night.

An encouraging turnout, some 200 youths and young adults rocked their night at *SCAPE Warehouse to the beats of a unique quad line-up – from pop to post-hardcore to skitzo-rock and hip-hop. Said Umar Mukhtar, producer for Indigo, “Each band was specially chosen for its commitment to Indigo’s cause because we wanted to strike a balance between the cause and music performance.” 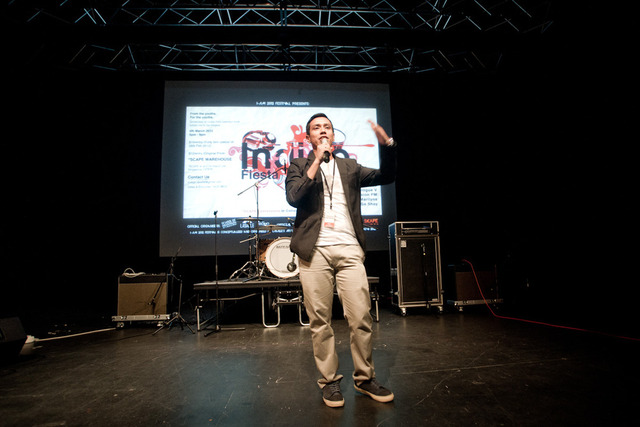 At exactly 6pm, veteran indie band The Marilyns kicked off their set with original pop hit, ‘Don’t Cross the Line’. Azhar Talib, the energetic front man of the, bounded onstage in a black Fred Perry polo and jeans with a microphone dressed in red. As a self-professed loyal (we’re talking about 16 years of loyalty here) participant in the Singapore indie scene, The Marilyns are still refreshing. Their free-for-all creative, laid-back approach is evident, whether in their banter with the crowd or the occasional bouts of forgetting song intros – the audience forgave them anyway. It’s hard not to with such a winsome team. The band also performed ‘The Devonshire Chronicles’ and ‘Don’t Leave Me Sunshine’ off their latest album, POP.SG, with mastering by Scott Hull (Panic! at the Disco, John Mayer). What better way to end the set than with a truly Singaporean song? ‘Heartland Hero’, an alternative pop and rock piece inspired by Talib’s friend, is about the silent hard work of both Singaporeans and foreigners alike, to keep our sunny island as beautiful as she is now. An apt finishing that cemented The Marilyns philosophy in music as well – pop has a new name.

The next band had the audience on their feet – moving to a music intro with jangling guitar riffs and commandant drumming. Barricade, formed in 2008, is a four-man show that merges different music genres together with the goal of creating the best music. The result? A heart-pounding, progressive rock gig reminiscent of Switchfoot and Love Me Butch. Led by vocalist, Rico, the band played a set of originals including ‘Absence’, ‘Last Words’ and their very first 2008 hit, ‘Operation Gabrielle’. With the audience chanting, ‘Operation Gabrielle’ on Rico’s cue, the stage became something like a rock revolt which erupted into a crescendo of “We rise, we fall, one for all.” In all their post-hardcore influences, Barricade does a fine job of screaming and crooning without the menacing metal excesses. The set might have ended a tad too quick, but good things don’t necessarily come in long, dreggy doses, and Barricade definitely got that memo. 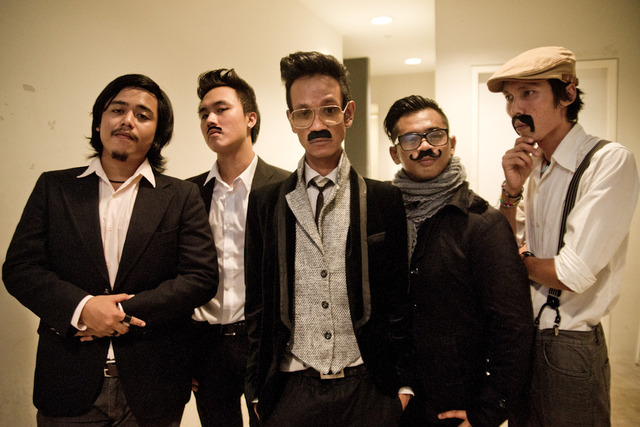 Fresh from their stint at the coveted Yamaha Asian Beat 2011 Finals in Korea, skitzo-rock band Catalogue V sauntered onstage in a retro-inspired Casanova get-up, complete with fake moustaches, gelled up manes and sexy suspenders. Judging from the enthusiastic cheering and loud sing-a-longs, Catalogue V was easily the hot favourite of the night. There’s no wonder why. Lead singer, Razil Razil Razil (no, it isn’t the fangirl in me chanting, that is his name) led effortless bantering that convinced even the laziest of fans to get on their feet and dance to their tunes. The set opened with infectious numbers ‘Show You How’ and ‘Dancer’. Originals, ‘Jessie Can’t Choose’ and ‘Loyal Casanova’ amped up the energy with formidable vocals and rhythmic beats, fusing modern and vintage and staying true to their promise of establishing a common groove. Closing with ‘Mighty Night’ on a disco rock vein left the crowd gasping for more, with “encore” shouts coming in droves. Indeed, the crowd was “gonna have a mighty night tonight”, which Catalogue gladly delivered. 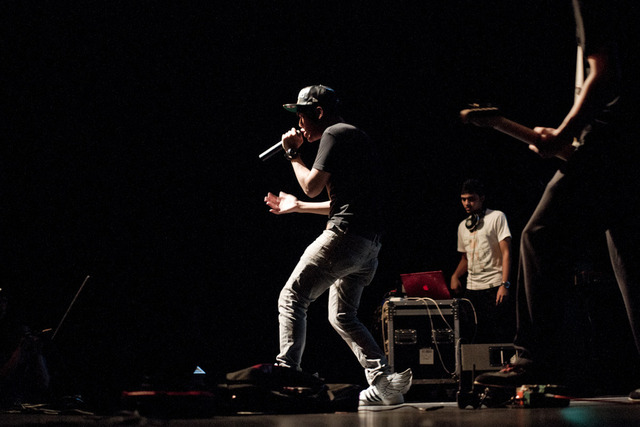 The fourth and final act belonged to young rap artist, music producer and songwriter talent, ShiGGa Shay. From the moment the 20-year-old hip-hop heartthrob stepped onstage with his trucker cap, black jacket and winged dunks, the audience couldn’t stop screaming. Correction, the ladies in the audience couldn’t stop screaming. Who could blame them? With the occasional “You look beautiful man,” and “This one’s for the ladies. That’s you,” it’s hard not to be mesmerized by his boyish charm. ‘Reach the Sky’, ‘Nothing On You’ and ‘Break Me’ showcased ShiGGa Shay’s shrewd rapping which, coupled with fantastic lighting by the Indigo crew, transformed the pit into a thumping, dance arena. With the rags-to-riches, fight-for-your-dream narrative, ShiGGa Shay’s lyrics tell stories. In one of his hit tracks, he raps, almost earnestly and rebelliously, “I came from a place where nobody believed in me.”

For all the youths who have been neglected and misunderstood by society, Indigo Fiesta is a place where the people believe in you. After all, indigo is a colour on the rainbow after a storm. Now all you have to do is believe in yourself.