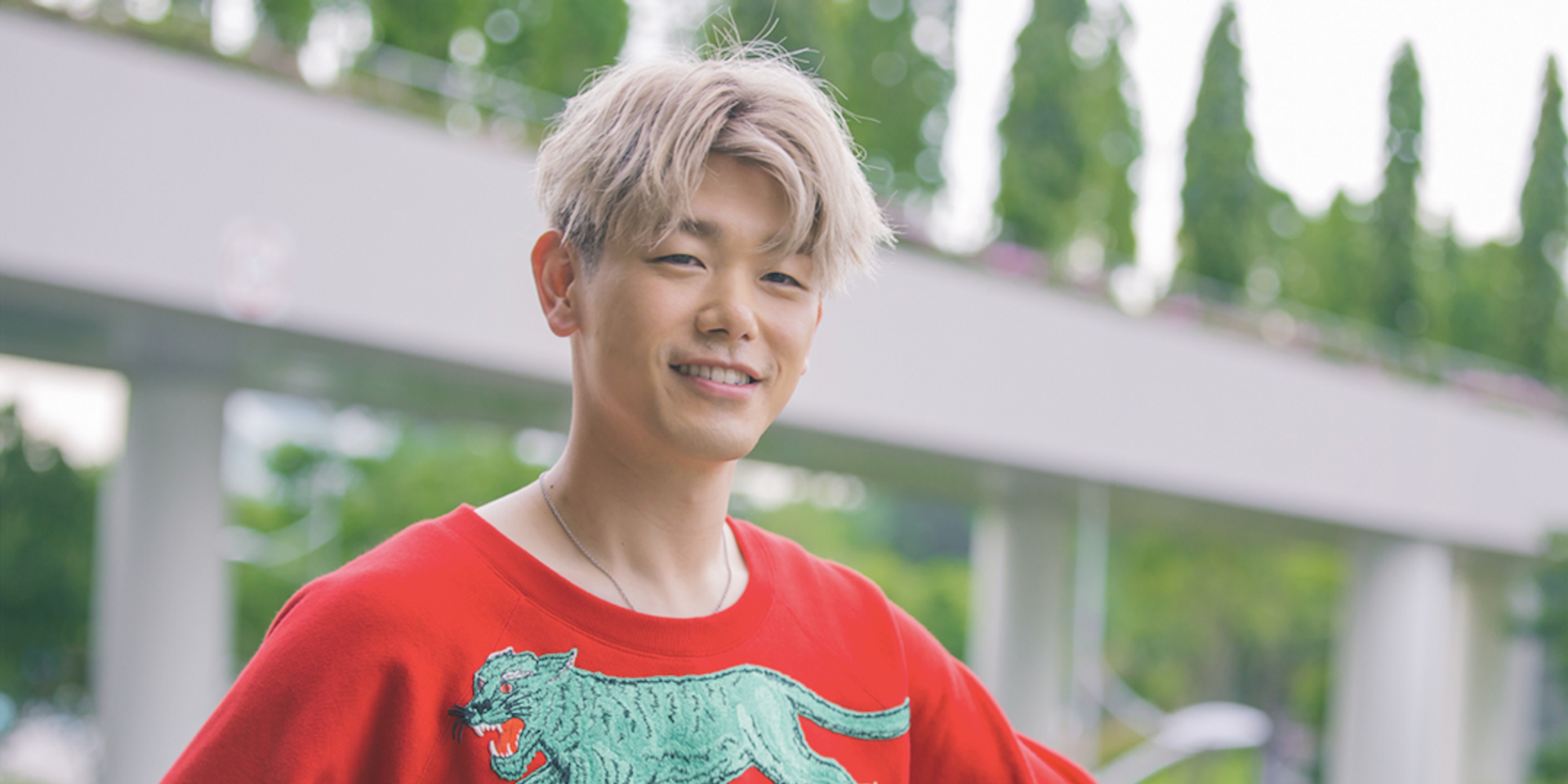 This September, Singapore will host Southeast Asia’s biggest K-pop music festival, HallyuPopFest 2018. The event will feature an exciting lineup of performances from more than 100 K-Pop artists over three days, including BTOB, Soyou (of Sistar) and more.

The appointed host for the event is Korean-American heartthrob Eric Nam, who is known for his soulful R&B tunes and also his TV presenter roles in popular variety shows like Arirang’s After School Club and MBC’s Section TV.

Nam rose to fame in 2013 with his debut EP Cloud 9, a dreamy, ballad-heavy album that painted him as a sweet and sentimental dude. Fast forward to 2018 and Nam's latest release Honestly, and that hopeless romantic is nowhere to be seen: Nam has exchanged the good boy image for a sleeker and bolder sound and look that Singaporean fans can look forward to seeing in person at the festival.

Bandwagon spoke to Nam about his new EP, finding the his place among Korean and Western music markets, and his upcoming role as the host of HallyuPopFest2018. Read the interview below:

Let’s start by talking a bit about your latest EP Honestly. What was it like working on it?

It was a long process. My team and I really tried to figure out what the ‘Eric Nam sound’ was for a while. I think up until now, I’ve done a lot of music that has been influenced by the label in a way, that was you know, as Korean-market friendly as possible. So we took a lot of influences from artists that I enjoy but wasn’t exactly my sound.

For me personally, I really enjoy pop music - Top 40s pop. We have kind of shied away from it because we wanted to stay Korea-friendly but this time I thought: why not try to make that to the Eric Nam sound instead of trying to take and borrow from other people in Korea? That’s kind of what we tried to do with this album, so [it's] a lot more Western, pop-leaning.

There are obviously a few English tracks, that’s kind of how the album process came about and almost all of the writing was done in L.A. with some of my favourite songwriters around the city. The people that we worked on the songs with have written for everybody – Dua Lipa, Khalid, Kehlani, Justin Bieber, Chris Brown, you name it and they’ve probably been on it. So we had a lot of fun working on it and hopefully the fans enjoy it as much.

And how would you describe the Eric Nam sound?

The Eric Nam sound - I think generally it’s kind of feel good, bright, energetic. Pop is what I would like to describe it as. When I talk about this personality thing, there are times we all go into songwriting sessions and sometimes there’s just all urban writers: urban hip hop, R&B writers, and I try to fit in my sound and it just doesn’t work most of the time. I can sing it and I can do it, but it doesn’t feel right.

The next day I’ll have a very pop, very upbeat kind of session, and that’s when it really feels right. So I think as I’ve been writing over the past few years, those were times I’ve been able to figure out: this is what I feel comfortable in, this is what feels like me. And these are things where I can write and I’ll just write it for other people. I’ll write it and I’ll give it to somebody else so I’m learning about myself as much as fans are sometimes, in terms of who I am and I think part of it is a natural evolution of somebody as a musician.

Do you think it’s challenging balancing the Korean and Western markets?

It is challenging, but I see it as an opportunity. I think too many people might see it as potentially a weakness of how you’re going to split your time or music that way. But for me, regardless of what I release, it’s something that’s true to who I am as a musician and as a person and I think for my fans, outside of the music, they appreciate me as a personality as well because I do so much TV and hosting, all these other things. So when you look at it as a holistic personality, I think it makes sense and it relates to people in a way that’s very different from typical K-pop and so I think of it as a great way for me to be different in a market where a lot of things are very well-polished and in some ways produced without many artists’ input sometimes. My fingerprints and hand prints are all over this album. It’s difficult sometimes, but it’s a task and a challenge that I take on with a lot of excitement and pride.

The Honestly tour will be starting really soon and you have been teasing quite a bit on Twitter: new songs, old songs, unreleased songs. Do you have anything to share about your tour?

Yeah, we have a lot of cool stuff happening for the Honestly tour. Right now, it’s only in North America, hopefully we can do Asia and we’re going to work on that. But, we have Loote, they’re opening for my Thai tour and they have a really great song called ‘Your Side of the Bed’. They also wrote that song by Cheat Codes and Demi Lovato called ‘No Promises’. I was a big fan of their music and it just worked out that we’re going on tour together.

I have some friends that are supposed to be coming out to the tour making some surprise appearances – all of it, you never know till it actually happens but I’m excited to be getting on stage with some people I’ve worked with in the past and some people I would like to work with in the future. But all in all we’re doing the full kind of American tour. We’re tour bussing the entire country and it’s going to be a month on the road which sounds fun but also incredibly stressful, so I’m excited, a little nervous but I’m sure it’s going to be a good time.

Obviously you’re very busy as an artist and host. With so much on your plate and having to work across continents, how do you take care of your health?

I really don’t [laughs]. And I really need to – people always yell at me for it. When I have time, I work out. For example, I worked out in January, then I didn’t workout till last week. And it was because from end of January, February, March, April, to the beginning of May I didn’t have a single day off. Every single day I was not sleeping, always in the studio. And if I’m not in the studio I’m doing edits somewhere else or I’m on TV somewhere else, or I’m shooting. And so it’s kind of overwhelming, it’s hard.

But what I found to be helpful is when I have the opportunity, to sleep as much as I can. And I’m the type that feels guilty for sleeping in, but now I’ve learnt to just let it go and when I have the chance, just sleep as much as possible. I take a good amount of vitamins and in Korea they give you some really great IV drips – shots sometimes. It’s like I’m always on the borderline of catching a cold or something. I like to get a lot of vitamins and workout when I can. And water - drink a lot of water. I think health is health, it’s pretty basic - you’ve got to workout, you’ve got to eat healthy and you’ve got to sleep. My balance is always kind of a mess, but thank god I haven’t gotten too sick this year.

Moving forward, how do you intend to break out of your current gentlemanly, classy image to explore other concepts and music genres?

I think that current image that I have is just kind of who I am. I’m not a great actor - I know some people, when they’re on TV they act a certain way or portray themselves in a certain image, but I just can’t. If something’s funny I’m going to laugh, if I don’t like something I’m probably going to say I don’t like it, it’s just the way I am. I think because I do so much TV, that’s not something that I can change in terms of my brand and personality.

But when it comes to my music I like to think of it as two separate things. On a music side, when I’m on stage, when I’m performing, when I’m writing, when I’m recording, I like to think in a much more creative and different way. And then when I’m on TV doing hosting and interviews, that’s just a normal, everyday kind of who I am. Some people say, ‘Oh you have to do one, you have to pick one, you have to stick with it’, but I think there’s multiple sides and facets to a personality, and you show certain sides or certain points to appeal to different sides. I don’t want to say anything is not genuine, but it’s just picking and choosing when to show what sides.

You're hosting Hallyupopfest 2018. Is it going to be different for you as a host?

Let’s see – I don’t really know what to expect. This is the first time the festival is going to be held so I’m kind of excited to see how it ends up and hopefully the fans show up. Whenever there are fans there’s always a good time. Good music, cool fans, good time. So I think it will be fun, I haven’t hosted in a while because I tried to really just focus on music for a few years but it’s something that for me is an opportunity to joke around and have fun and make people feel comfortable in the crowd and on stage as well, because the role of a host and emcee is to obviously connect both sides: people in the audience, people on stage, and for that transition to be as seamless as possible because I know fans are going to be paying a lot of money to come see their favourite artists and they want the best experience.

Artists are coming, we’re always just overwhelmed and always getting pulled in a million directions. So before they’re on stage and before they’re meeting fans, to kind of get them all ready and prepped. So I don’t take this lightly in any way, but I think of it as a very cool, fun, exciting opportunity.

Who are five acts you'd like to see here and why?

Five K-pop artists that I’ll want to see here… oh let’s see. Well, I always enjoy watching BTS obviously. Red Velvet, and who else - Winner maybe, who else. Gosh, what have I been listening to lately? I don’t even know. Maybe like GOT7? These are just friends, I just keep listening to my friends because I’m a solo artist and I’m always lonely. So when I have friends here it’s going to be a good time.

Catch Eric Nam and artists like BTOB, Soyou, Jeong Sewoon and more at HallyuPopFest 2018, happening from Friday, 7 September to Sunday, 9 September in Singapore. Ticketing details will be announced soon.