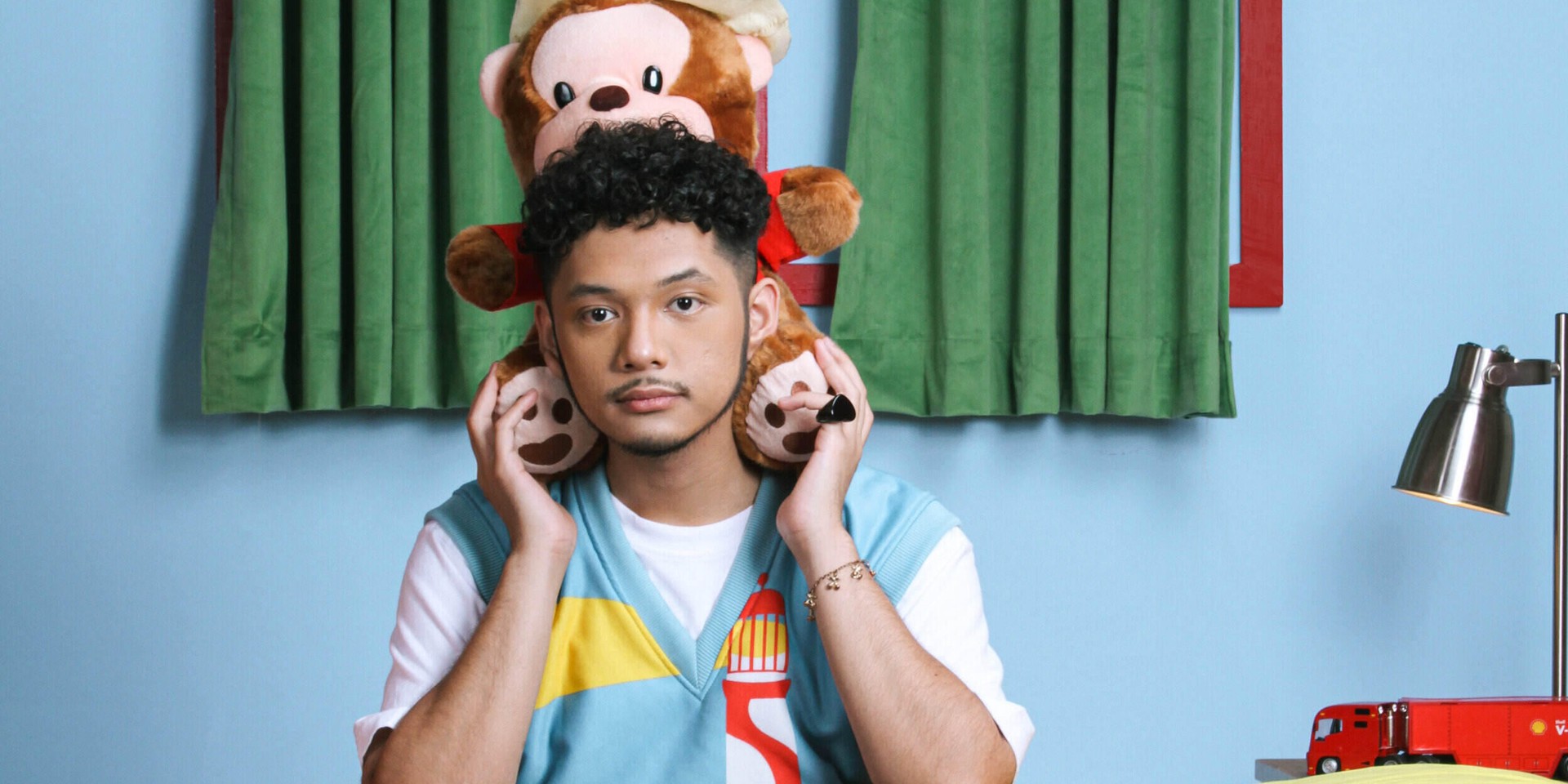 Indonesia boasts a wide selection of artists, but there's no one quite like Basboi.

Clever and playful, yet vulnerable and impactful, the Indonesian musician is using the power of music to help people through the confusing and oftentimes scary journey of growing up. Reflecting on his adventures as a 20-something in Jakarta searching for his purpose, Basboi is hoping to lend a helping hand to anyone willing to lend an ear. 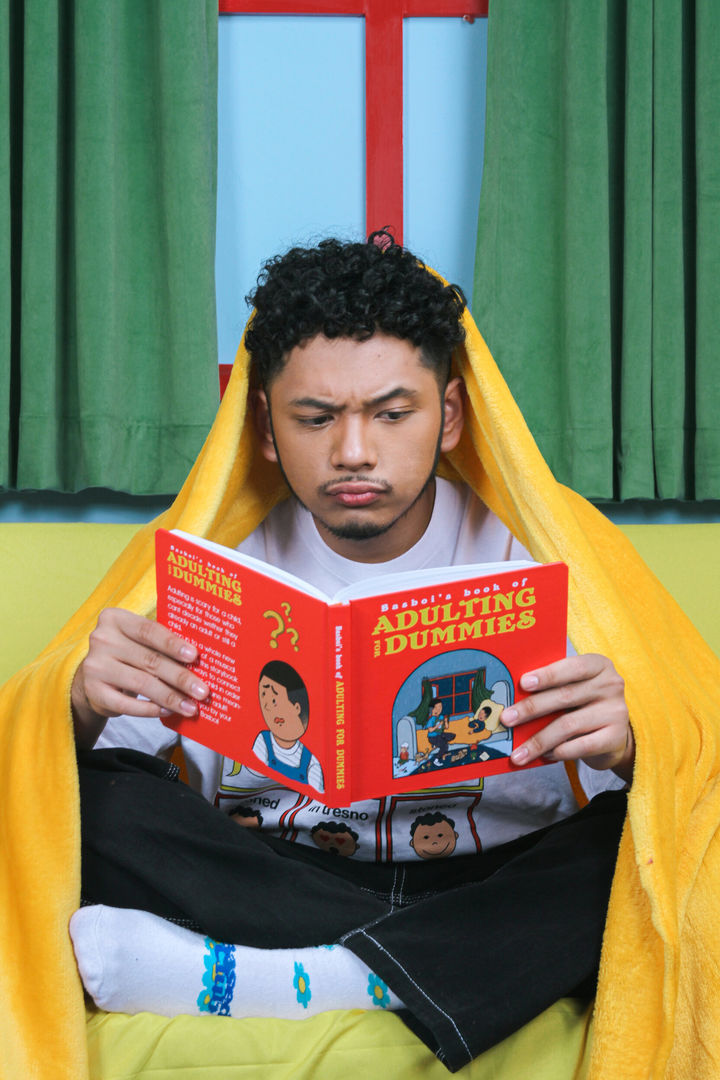 Basboi – known in real life as Baskara Rizqullah – first came onto the music scene in 2017 with an array of singles before eventually releasing his debut EP, Fresh Graduate in 2019. Symbolising the start of his coming of age story, the record was the world's first glimpse into his colourful and vivid brand of hip-hop and R&B.

Following Fresh Graduate and another set of adventures through life and music, the 'Night Drive' act pieced together his first-ever album. Uniquely delivered as a lighthearted children's book, the record, aptly named Adulting For Dummies, is a testament to all that Basboi has learned and experienced.

"In a nutshell, it's a coming of age story. It's a journey of a 20-something kid from Indonesia who tries to make it and all the things he faced, lost, and gained along the windy and weird road of adulting," he shares.

Bandwagon caught up with Basboi to talk about his musical beginnings, his journey through adulthood, and how Adulting For Dummies came to be.

Hi Basboi! What have you been up to lately?

Hi Bandwagon! Lately, I've been busy doing promo stuff for the album, and the collaboration merchandise with 'Bukan Misteri Belaka', a cut & sew clothing line from Jakarta. I'm also preparing my drop for another collaboration merchandise with 'Public Culture', a streetwear brand from Jakarta. Also trying to work out on the daily – this is very hard.

How did you first get started with music?

Back in elementary school, my mom forced me to take a classical piano course. I hated the course but fell in love with the music. I stopped the course and learned piano and guitar by myself. I played in a hardcore band in high school and started rapping in college.

Music is a skill set that I have that could get me to leave a mark in this world, to be significant, to create something that makes people really feel so that I have meaning in this meaningless life. That's what motivated me to pursue it as a career.

The audience found my musical character very 'different', some describe it as out of this world. I guess being okay with one's flaws and being vulnerable is something that the audience found 'new' or 'refreshing' when actually it's not, it's just the basic things we need to be. It's not often that musicians or more specific rappers my age in Indonesia talk in their songs the same way they talk in real life with all their vernaculars. They found it 'new' when for me that's how I always talk and act.

I want the impact of my music to make the audience feel that it's okay to be naked, be fully yourself. If you don't like those obscure-super-artsy indie-from-who-knows-where-country bands that the scene kids think is cool, then you don't have to. If you don't feel like wearing what those super influencing influencers told you to wear, then don't. Like what you like, be interested in what you are truly interested in. Be proud about it, be honest about it. If you feel like being a salaryman that's considered by the creative bunch a boring job, be it, man. It's never boring or not cool if you like it. I want my music to tell them all of this, and I also hope that my music could help the audience to cope with whatever they're facing.

Congratulations on the release of ‘Adulting For Dummies’! How did it come together?

It came together when I was going back to my parents' house in Medan, in my old room I found a children's storybook just like mine. It consists of 11 to 12 chapters about how young kids have to behave in certain situations. At that time I already released 'Make Me Proud' ft Matter Mos, and already have 2 to 3 demo songs for an album with no concept yet. A light bulb just appeared over my head, this book is the same thing I've been working on.

Then I decided on the theme of the album and it has to be delivered like a children's book. It's light, fun, not intimidating at all, and hard to put down yet have a very important message and is very impactful. Because adulting topics feel heavy to me especially if I deliver them in such an adult manner, it's boring. If I'm not interested in it, how can anyone be?

Share with us one song off the album that you’re especially proud of, and why.

'Bismillah'. It's unreal that I, a kid from nowhere that knows nothing, could make a grand song as complex yet very simple and modest that moved so many people's hearts.

I still don't quite know how I made it like and to make it more unreal it even features one of Indonesia's legendary musicians, Kamga. That guy used to be on my TV, now he sat beside me working with me in a studio for my song? Life is weird haha.

From your debut EP ‘Fresh Graduate’ in 2019 to ‘Adulting For Dummies’, how do you feel you have grown and evolved, both personally and musically?

I used to worship Western culture, especially America – the lifestyle, the reference, everything. That was cool to me while being Indonesian and to have the culture of my country used to be wack to me. To be cool is to be like America is what I thought. My music needs to be in English, the topics I talk about have to be the topics they talk about, the sounds have to be exactly like them.

Along the way, I realized it sounded hollow. I'm lying, it's not me. I have to be more me. Music and rap is a medium, it's a canvas and I have to paint my painting on it. It's meaningless if I paint other's paintings on mine. Americans are like that not because they think it's the way to be cool, but because that's them, that's their reality, and that's what they portray. This impacted not only my music, but it also my mindset, my way of dressing, my taste, my way of talking, my judgement of myself, my culture, and my people.

How did you come up with the concept for your music? Is this a theme you will carry on with your future releases?

I see my music as a communication channel, a medium. I'm sending a message to the audience. If the audience doesn't get what I'm saying, it's never their fault, it's mine. I'm a bad communicator. That's why I mix the language and do the switch code thing, it helps Indonesians who aren't good at English yet and also helps me to deliver my reality and perspective more to me.

This mentality that builds my concept will always be my principal in making my music. The form has to evolve in the future because my inputs and influences will also evolve so the output will follow.

What is your biggest dream for your music career?

To be financially free by working on it, and to change fellow Indonesians' perspective on ourselves and our culture. We tend to think that ourselves, individually or culturally, will never be better than those in the West. I want to make them truly realize that we're as cool as those in the West, even better maybe. We just never see it that way.

Making clothes, making shoes, making campaigns, and building a brand haha. I try to trick myself to enjoy working out for these last 2 months.

There will be many more merch collaborations with various clothing brands, there will be another version of all the songs on the album, there will be new experiences and methods from me to all the audience to enjoy music, there will be Basboi with shredded abs and sexy bods (hopefully), and there will be a vacation for me, i need it so bad.