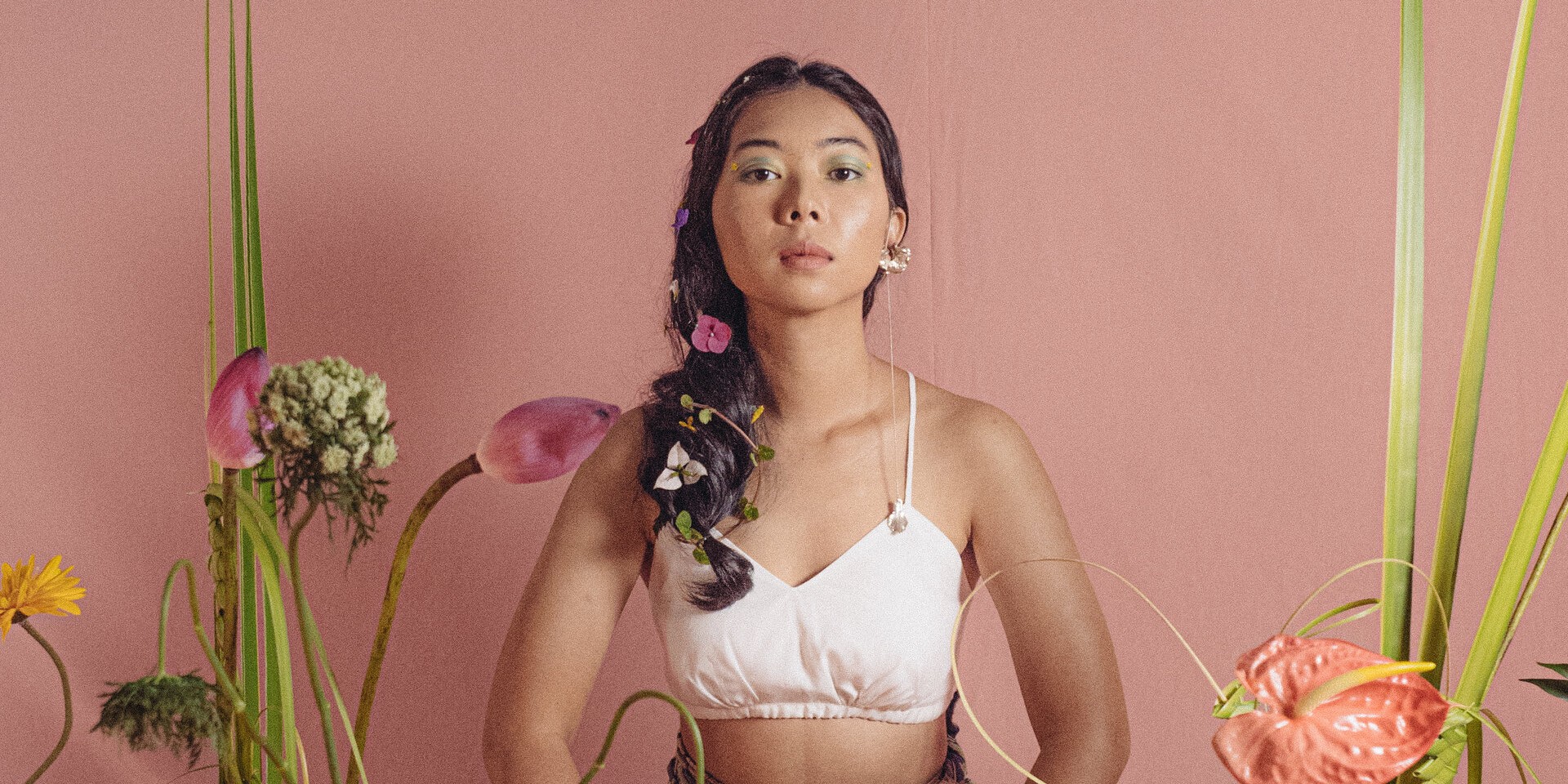 Graceful, ethereal, and something straight out of this world, listening to hara's Kenduri feels like walking amongst a magical garden – which oddly enough was how she put the record together.

hara is Rara Sekar's latest musical project, which will feature all facets of the singer's musicality and identity. Wanting to combine all of who she is as a musician, a gardener, and an anthropology researcher, hara plans to release a series of records that explore the varied perspectives and themes of daily life – starting with her garden-inspired EP.

"I am excited to explore not just musically but also artistically to share stories that also reflect my perspectives on social, environmental and political issues," hara tells Bandwagon. In Kenduri, the Indonesian singer-songwriter channels the beauty and tranquillity of gardening into an immersive sonic landscape soundtracked by calming folk-pop music.

"The songs in this EP are basically inspired by my effort to look for hope amidst the pandemic in which I found through gardening," she shares.

"'Kenduri', in Indonesian or Javanese, is usually known as selametan or a communal blessing ceremony to celebrate life, death, and also as a celebratory harvest blessing ritual that is usually practised by farmers in Indonesia. This album is an interpretation of my own ‘kenduri’."

hara comes as Rara's first solo project, after she got her start in music as part of the folk duo Banda Neria. Following the duo's disbandment in 2016, the 'Ati Bolong' act joined the band Daramuda before their final EP in 2020.

"I think all of my previous music projects before my solo project 'hara' have really shaped the musician I am today. Without all of them, I wouldn’t even think of pursuing this path in music," she shared.

Following the release of her debut EP, Bandwagon caught up with Rara to talk about her musical journey, her creative process, and what else we can expect from 'hara'.

Hi Rara! How did you get started with music?

I was brought up in quite a musical family, my mom is a piano teacher, and my dad really loves music too – he was even in an indie band called Sangkuriang Voice back in his college days. So naturally, I was introduced to music at a very young age. I think my younger sister, Isyana Sarasvati, and I started taking music lessons since we were 4-5 years old? Quite early. We took piano lessons, electone, classical vocal, jazz vocal, violin, and even the flute. Unlike my sister who is a musical prodigy and ended up studying music for her degree, I actually quit all of my music lessons in college, decided that music will never be a career for me and only focused on my academic career. But what is life without surprises, right? In 2012, the university press club that I was part of organized this underground gig to celebrate my graduation and asked if I could perform a song or two. My friend Ananda Badudu, offered to accompany me and so we performed under the name Banda Neira. After that performance, we started working on a couple of songs together just for our friends to listen to and only uploaded the songs on Soundcloud. I’m still not sure how it happened but one day our Soundcloud got discovered by a wider audience, we became an official duo and I guess that’s how I accidentally became a musician today.

You’ve worked on a few band and collaboration projects in the past, how do you feel this background has shaped you as the artist you are today?

Banda Neira gave me the confidence that I have something to offer to this world through my voice. Daramuda provided me with a safe space to write my own stories through music, and each opportunity given to me to collaborate with other talented artists made me realize how much I just love making music and that I, as cliché as it sounds, cannot live without it.

Let’s talk about your new project as hara! Where did the idea of 'hara' come from and what do you hope to achieve with this new musical persona?

Unfortunately, all of my previous bands disbanded. After disbandment, for a long time, I pondered on this diverged road of either staying in music but going solo, or leaving a career in music altogether.

In 2020, just before the pandemic hit, I suddenly got this revelation of a form for a solo project that embraces a multi-disciplinary approach, combining everything that defines me today as a musician, a researcher in anthropology, and a gardener: music, art, photography, and activism under the name ‘hara’.

How would you describe your music and how do you hope it impacts your listeners?

I often find my friends and listeners describe my music as reflective, contemplative, calming, transcendental, and dreamy… and I think I agree with them. It is a fusion of folk, pop, Indonesian traditional music, ambient with a hint of post-rock influence. My first single 'Ati Bolong' is a great depiction of all of these features combined.

I also like infusing my songs with soundscapes with the hopes of transporting the listeners to a place, somewhere only they know. The way I write my lyrics – short and lots of repetitions – is heavily influenced by mantras, so I sometimes treat my songs like prayers. I don’t really want to dictate how people feel when they listen to my songs but I do hope that my songs can transport listeners to a safe place where they can reflect on life while at the same time realize the beauty of life as it is.

Congratulations on the release of Kenduri! Tell us more about the EP and how it came together.

Thank you! I’m so happy it’s finally released, this EP is a 'covid lockdown' baby. I was working on my LP in early 2020 but when the pandemic hit, I just stayed home and postponed working on my LP. The lockdown gave me so much time at home, especially in my home garden (I’ve been learning to grow my own veggies at home since 2016) so I thought why not make a mini-album based on my gardening experience?

From taking inspiration from your garden to writing the tracks, what was your creative process like putting together Kenduri?

Because I’ve been gardening for a little while now, one day during lockdown, I just started writing all of the four songs in one sitting. I think the stories were already written in my mind and I just needed the time and space to manifest them into songs.

The EP consists of four songs. It begins with a song dedicated to my plants inspired by the folk song written by indigenous farmer communities ('Tembang Tandur') followed by a song based on a dream where I plant vetivers on the banks of a dry river near my house ('Akar Wangi' feat. Guna Warma), a story inspired by the struggles of Indonesian farmers to defend their land where I explore land as the last field of struggle to grow hope ('Kebun Terakhir' [The Last Garden]), and finally, an ode to the everyday beauty of life ('Arumdalu' [Night-blooming jasmine]).

After I finished all the demos, I went to my sister’s home to record all of the songs – at that time, for some reason all of my neighbours, left and right, were renovating their houses so it was impossible to record anything at home!. I then went to the Bogor Botanical Garden to record some soundscapes to complement the songs, continued working on the songs with my co-producer Febrian Mohammad, added a strings arrangement and recorded the strings section at a studio in Jakarta. So, I’d say 80% of this album is done at home.

Did you have a specific track off of the EP that you were particularly excited for people to hear? If so, what is it and why?

I love all four of them, of course. But I guess, especially for non-Indonesian listeners, I’d like to propose to listen to 'Arumdalu', the last track of my EP, Kenduri. The lyrics are not that long (very mantra-like) so perhaps it’s easier to understand.

It’s a very dreamy Ghibli-esque song that reminds me of my childhood. In the middle of the song, I also added a recording of 6-year-old me saying “Daag Oma, Daag Opa, Daag Eyang Putri, Daag Eyang Kakung, Daag lieve Ibu, Daag Bapa (Bye Grandma, Bye Grandpa, Bye lovely Mom, Bye Dad) that I found from an old cassette that I used to record my singing on. This song is very precious to me as it not only embodies the person I am today but also my past and my hopes for the future.

You mention that Kenduri is only the first part of a bigger “kenduri” storyline and theme, can you tell us more about what to expect from this upcoming series?

Kenduri the album represents the personal dimension of my gardening experience. I’m currently working on the political dimension of Kenduri. I can’t spill anything right now but all I can say is that it’s a collaborative artistic-academic project that is set to complement the album.

I’m very excited to release this soon but also mindful of the pandemic situation we’re in. To be honest, it is very hard to be productive when the world feels like it's ending haha. But yeah, hoping to release this project before the end of the year if time allows.

What else would you like to musically experiment with in the future?

When it comes to themes, I already have a list of things I want to explore, musically and artistically. One of them is how I experience the world through a female body, born and bred in Southeast Asia.

Musically, I would like to experiment with more sounds, including noise, drives and beats, and work with producers who are willing to fuse my music with post-rock and ambient influences. I really like the idea of performing with a full band, so hopefully, this will come true in the future.

Who are some artists, both locally and internationally, that inspire you?

I very much look up to Efek Rumah Kaca, not only for their music and lyrics but also their activism. I also grew up listening to SORE, The Trees and The Wild and lots of local traditional musicians (because growing up I was also part of the gamelan ensemble and Sundanese choir). People say that the music you listen to during your youth will shape how you experience music thereafter… I guess it is true.

Internationally, I am heavily inspired by the music of Nick Drake, Sufjan Stevens, Bon Iver, Takagi Masakatsu, Ryuichi Sakamoto, Joe Hisaishi, and Ólafur Arnalds. There is so much new music released every day but I just always come back to their music.

Right now, I honestly just want to survive the pandemic, hahaha. Things are a bit rough here in Indonesia at the moment but once things go back to somewhat normal again (not sure when that is), I would love to go on tour around Indonesia and perhaps, Asia.

While preparing for the second phase of Kenduri, I have also recorded a lot of collaborations with other Indonesian artists. So, please look forward to these exciting collaborations too!