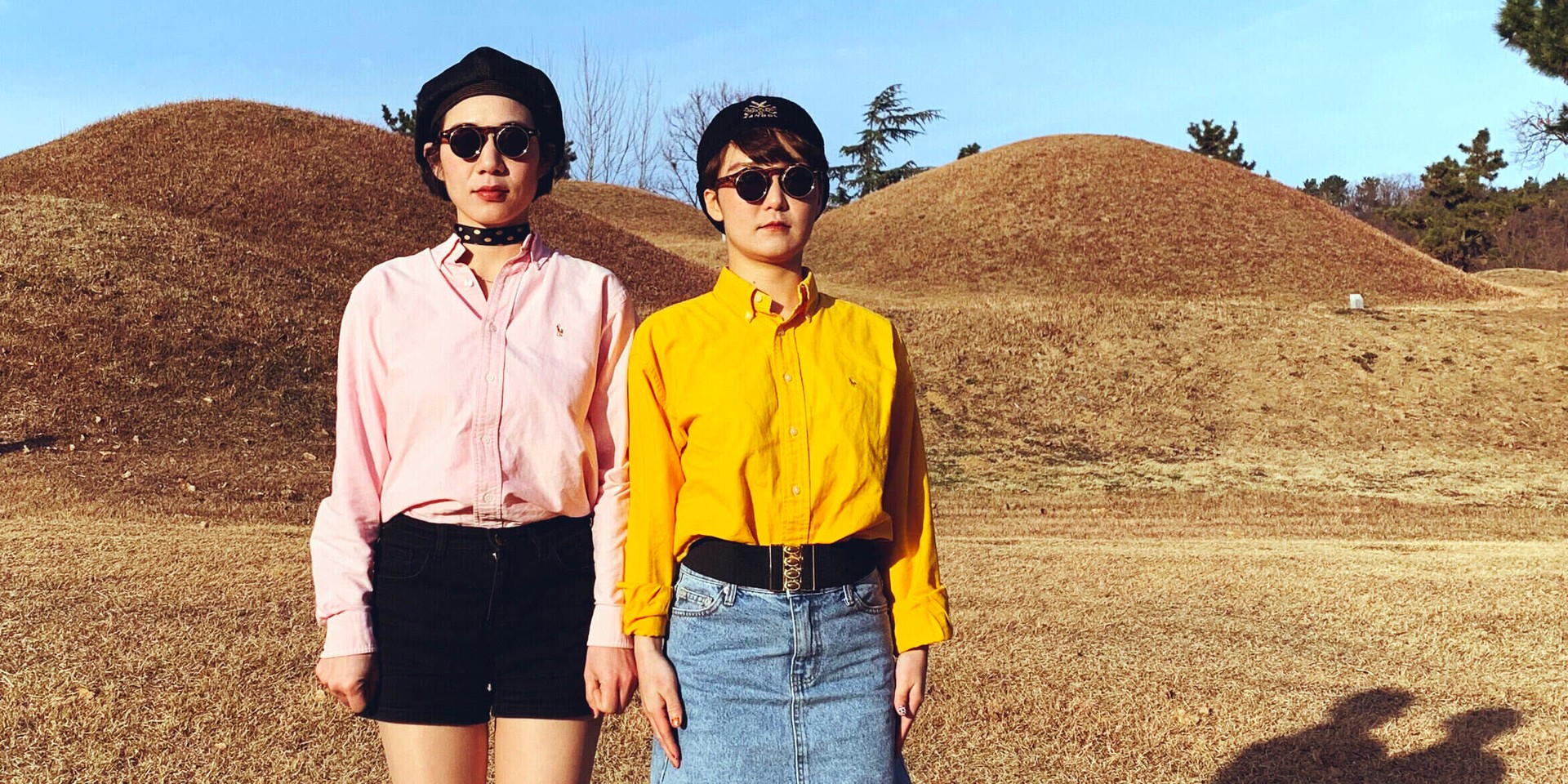 Drinking Boys and Girls Choir's name radiate youthful energy and late-night trips to town, and their music is no different.

Hailing from the quiet city Daegu in South Korea, Drinking Boys and Girls Choir is a two-piece punk band that create meaningful stories of inclusivity, acceptance, and self-love against the backdrop of hardcore punk, pop, and indie rock. Comprising MJ (vocals/drums), and Meena (vocals/bass), the band first together in 2013 after finding a common love for skating, punk music, and drinking.

Strange yet intriguing, the band took their name from the fact they were literally a group of boys and girls singing and drinking.

"We couldn't name the band until the first performance, but we suddenly thought of it and put it up. It means that everyone, boys and girls, who like to drink and is a group that sings together. In fact, we think anyone who enjoys our music and sings along can become a drinking boy and girl choir itself," Drinking Boys and Girls Choir tells Bandwagon.

Since their formation in 2013, the band has seen several changes in its lineup but MJ and Meena have continued to maintain the band's pleasantly reckless and violently happy energy through the years.

Drinking Boys and Girls Choir released their first album Keep Drinking in 2019. A collection of all the songs they've ever released, the 18-track record narrates tales of carefree adolescent adventures while also tackling issues such as corruption and elitism. Showcasing the band's immense passion for music and their local punk scene, Keep Drinking features powerful instrumentals that can easily get your heart racing.

Following their debut record, the band has gotten the chance to perform all across the world, opening for acts like Otoboke Beaver and Say Sue Me, and attending festivals such as SXSW, MU:CON, Zandari Festa, and more.

To start off 2021, Drinking Boys and Girls Choir dropped their track 'Gonna Tell You', and is currently making their way through their second album. While we wait for the band's sophomore record, Bandwagon caught up the punk band to talk about their music-making process, their dreams and aspirations, and what's next for the choir.

Tell us how each of you got into music and how the band eventually came together.

MJ: I fell in love with a Korean idol girl band AIDA on TV when I was a senior in elementary school. After becoming a middle school student, I learned how to play the drums in the musical instrument store and acoustic guitar at school. Since then, a band has formed in a cathedral that I attended and started the band in earnest, and when I was in high school, I played in the school's Wind Orchestra Club. Then I started a rock band with my friend who was introduced by chance.

Meena: When I was in high school, my classmate introduced me to Marilyn Manson music, and I felt my frustration subside. Since then, I have been interested in band music and decided to learn musical instruments when I became a college student. On the first day of entering university, I went to the band club in the school and learned how to play the drums.

Since our first album, we’re now more focused on our thoughts about queer, punk rocker in the 30s, and women. We wanted to convey sympathy and comfort in the midst of fast, hectic and exciting music.

There are many ways to make songs. Sometimes each member makes almost the entire song with some inspiration and then learns and arranges it together. Sometimes, we all come with small ideas and attach them together and develops it from there.

For example, for 'OH MY CALIFORNIA', which was included in our first album, Meena wanted to make a song that started with "Oh My California," so we sat down together to make stories and put together the song. And, for 'I'm Not A Machine' in the upcoming second album was made while playing freely with only the title and lyrics.

Having started as an independent band, how do you feel that background influences you as artists today?

Now, we think the boundaries between indie musicians and hobby artists in the room is very vague because it is so easy for anyone to produce music and video at home and do a one-person broadcast or release it. In line with the situation where it is difficult to go outside, it is an inspiration to be able to access various contents at home, and it makes us think more about what kind of music we will make in the future especially about the message.

Could you tell us more about your 2019 album ‘Keep Drinking’ and how it came together?

We were lazy people who liked to drink and perform so it was difficult to decide when to produce an album. When MJ had surgery for a motorbike accident, all our performances were suspended so work on the album began from then.

The songs in the album are a collection of all records since the band started. We've seen our favourite bands disappear for many reasons. Some bands' disbandments were inevitable but we began with a commitment to release all our songs as an album, so we did this while watching countless bands disappear without even leaving a single track.

Tell us about your latest single ‘Gonna Tell You’ and the story behind it.

Kim In-hye of The Pollack, an independent bookstore in Daegu, asked if we could participate in the independent film Gonna Tell You with our music. We saw the scene and really liked it.

The plot was simple - Han Ji-won, the main character makes a public confession to Sung Ji-won, and she gives an answer to it. I have always thought that love confessions in public places that were romanticized in dramas and movies could feel violent to someone, but no one saw an issue with them. I think the movie expressed it well without difficulty, so I said I would definitely do it. I wrote some lyrics and added cute melodies to match the movie's content. As our guitarist was vacant, I finished the song with the help of Jae-don from the band New City, the owner of the rehearsal place. The sound of the bike ring in the introduction of the song was also a major idea for the film.

How was it like performing to an international crowd at SXSW 2019?

It was an honour to participate in the biggest event for indie artists. The opportunity reached us and we were able to do the showcase three times. I was surprised and grateful that there are people who enjoy our music in faraway countries. It was fun to meet new musicians, and most of all, it was a rare opportunity to meet label mates scattered abroad, so it was a more precious time.

What other stages would you like to perform on?

During the Zandari Festa, we had a good time with a band called Elis Paprika from Mexico. They were also musicians who talked and acted on feminism. If we ever have a chance someday, I want to go to Mexico and perform with them. Actually, I want to go anywhere in the world if we had a chance.

What is your favourite memory from your musical journey so far?

The experience of all our performances and tours is fun and valuable. One of them is the Indonesian tour. It was our first overseas tour and it was a DIY tour, so I think it was more special.

We felt the warmth of our friends as I stayed at friends' houses from all over the country. In Bandung specifically, our scheduled performance was cancelled due to the police's deterrence, and the new secret studio performance was made in a hurry but our friends still came to see us until late at night. We will probably never forget that.

What is your biggest dream for Drinking Boys and Girls Choir?

Make music and play for a long time - it is the reason why we made the band and our ultimate goal. But, we have an idea that it would be nice to be invited to Oktoberfest in Germany to perform. I don't know if there is a band performance session at Oktoberfest but it would be nice.

MJ: I usually go to work at daytime and grow a lot of plants in my apartment. It's good to see how the seasons change.

Meena: I am not just doing the band, but I also work for a living so I focus on recovering my tired body and mind on days off. I spend most of my time in bed. I eat a lot of delicious things and watch comic books, movies, and TV series. I try to go to a small mountain in front of my house often.

Share with us any upcoming plans you have for your music

We're performing at March 2021 SXSW online, and we're working on our second album release. We hope you watch and listen to this album and the message inside it.